Back in August of this year, MONDO held one of their awesome Mondo Mystery Movie events, which wound up being for JURASSIC PARK and had the great Phil Tippett in attendance.   I've known Phil for a number of years now, ever since we met and got to talking at the World Premiere of STARSHIP TROOPERS back in the primordial days of AICN.   So when I saw him at the Mondo event, we struck up a conversation about the way of film these days.   I was inquiring about any personal projects that he was working on and Phil excitedly told me about MUTANT LAND. 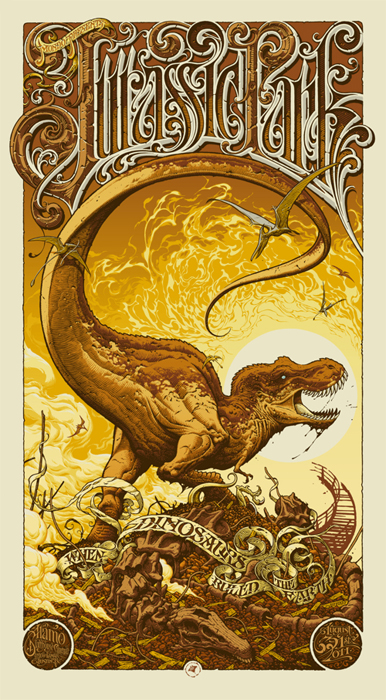 The throngs of Mondo Poster collectors were rabidly occupied with the above poster, but after that the remainders of the audience sat and watched Ray Harryhausen's astonishing 7TH VOYAGE OF SINBAD.   After that, as Phil and I were talking, the Drafthouse suddenly played MUTANT LAND upon the screen - and I was absolutely delighted by it.

Computer animation has the capacity to be as wild and as insane as the very fabric of imagination itself, but rarely do we see it have this kind of awesome to it.   When TIPPETT STUDIO reached out and asked if I would like to debut online the astonishing magic of their craft, I was only too happy.   I was hoping to get this up on BNAT EVE, but alas - it was meant for release today!

Now, as you watch this...  just imagine if Phil Tippett and his amazingly talented folks at TIPPETT STUDIO created a feature length film that more fully explored this amazing world that we get such a tantilizingly brief glimpse into.   I, for one, would love to see this short give way to something where Phil could really stretch and unleash the furious imagination that has served so many for so many years...  Now behold...  Pure Phil Tippett awesome! MUTANT LAND!!!