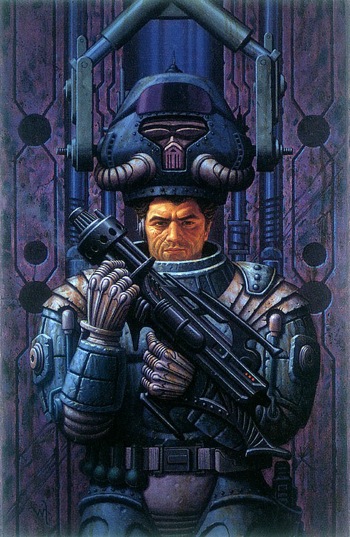 "C'mon, you apes! You want to live forever?"

When Paul Verhoeven's STARSHIP TROOPERS came out in 1997, I watched it with a friend who worshipped Robert Heinlein's militaristic sci-fi novel. While I cackled and cheered through the entire film, he sat quietly. I couldn't tell if this was rapt attention or something else. When the credits began to roll, I quickly learned it was something else. "That wasn't STARSHIP TROOPERS. Fuck this movie."

Well, if you prefer your Heinlein straight-up with no satirical flourishes, I've a feeling you'll be getting precisely that when producer Neal Moritz unveils his STARSHIP TROOPERS reboot at some point in the relatively near future. According to Vulture, the new take on the film will be written by Ashley Edward Miller and Zack Stentz, who received credits on two of last summer's biggest superhero hits (THOR and X-MEN: FIRST CLASS). There's no word on a director yet, but feel free to offer up suggestions.

While I adore Verhoeven's film, I am fine with a tonally-faithful adaptation of Heinlein's classic. If Moritz makes a more hard-nosed, right-leaning film, these two works could make for a great cognitive-dissonance double feature one of these days.