An Unexpected Journey: Quint on the set of The Hobbit Part 5 – Thorin's Dilemma

Welcome back to Middle Earth! One more report from Denize Bluffs (aka Mangaotaki Rocks) before we move on to the next (and pretty awesome, I might add) location.

This day was fairly unique as far as location shooting goes. Typically you go out in the wild to get big establishing shots, which is why a whole lot of the footage I’ve seen so far involves running. With the quickly changing light, fast moving clouds, uncooperative weather getting anything but quick bits is often difficult and will make even the most adventurous director long for the controlled confines of a studio.

However having a real meaty dramatic scene shot amongst this kind of backdrop gives even the most fantastic movie a sense of grounded reality that a stage simply can’t replicate. Not 100% anyway. Look at Jaws, a movie about a pissed off, maneating shark. It is all the location work (and the headaches that came with it) that made that movie believable.

So it was a great pleasure to see one of the location days on The Hobbit that wasn’t an action beat. I mean, most of the Bag End stuff wasn’t actiony either, but for the most part it was bits and pieces.

The scene shot this day was a hefty bit of character work as Thorin and Gandalf’s friendly consultation turns heated.

I knew I was in for something different when they were getting close ups, the background barely edging into frame because the focus was now on the drama, not the scenery.

The introduction to the scene was a good LOTR style shot, though, so don’t you worry. There’s still a lot of New Zealand on display as all 13 dwarves, Bilbo and Tall Paul ride their horses and ponies through some rocks to the hill where the derelict farmhouse sits, or what’s left of it.

Two giant Technocranes were set up to catch this action, one pointed at the group as they ride up and the other catching them as they pass then panning and rising to see where they’re headed. Seeing these monsters out in the wild was quite fun, I must say. 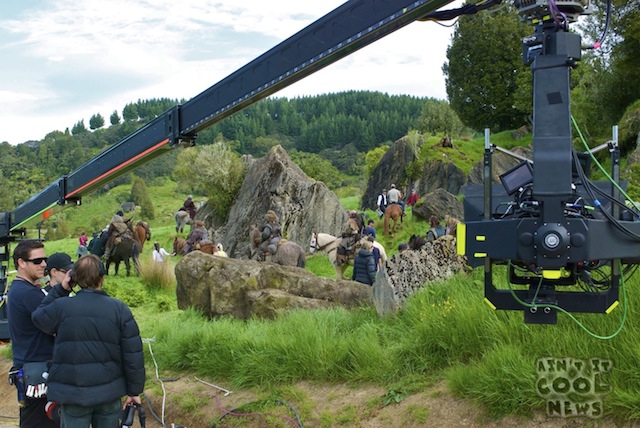 In-between takes the hardworking crew had to run in and literally rake the grass to hide the horseprints. See? 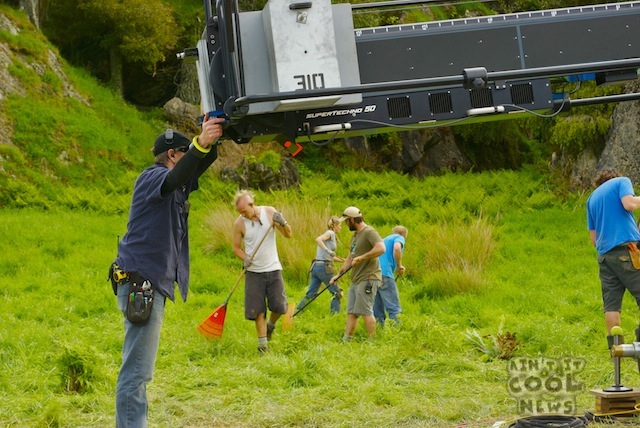 It’s late in the day and the idea is that this is a suitable place to make camp, but Gandalf wants to push on and seek Elrond’s council at Rivendell.

This scene is all about Thorin and my first real chance at seeing Richard Armitage craft a layered performance with the character. Thorin’s a stubborn dwarf, very much a leader, but is smart enough to heed the council of Gandalf.

He is a man torn in this scene. His deep resentment at the elves (he believes they have betrayed his ancestors by not stepping in when they needed their help) pulls him one way, but his respect for Gandalf pulls him the other.

Armitage does a great job with Thorin’s inner struggle. The look on his face isn’t someone locked into a decision. Gandalf urges him to seek Elrond’s help, for the good of the quest. Instead of playing it like a stone-faced general, Armitage does weigh his options and mostly in reaction to Gandalf’s words, not in his own dialogue.

In other words he conveys the struggle with his face, giving Thorin a depth I was anticipating. I’m sure the inclination would be for Armitage to play it stubborn and he does, but he layers it with some real emotion.

I was wondering how they were going to handle Gandalf’s disappearances, which in the book always happened at the worst possible times with the wizard pretty much just saying “Alright guys, good luck. Gotta run!” That wouldn’t fly too much in the movie, I don’t think, even though we are getting more glimpses into just where Gandalf is zapping off to.

In this instance Gandalf’s departure is an emotionally driven one. The dwarves and Bilbo stay behind, Bilbo especially concerned about losing their Wizard. Will he come back? Nobody knows.

This location served as Peter’s Birthday spot. The man came to work on his birthday without much fanfare until the dwarves surprised him with their present… a calendar that featured each dwarf in some inappropriate position. Think of it as a Hunky Firemen calendar but instead of hunky firemen it was all hunky dwarves in the most ridiculous romance book cover positions imaginable.

I know of some fans on Twitter that would kill to have a look at that calendar. There’s a mighty large Richard Armitage and Aidan Turner contingent on social media sites I’ve recently discovered.

Wow, that was a short one this time out.

Let’s see who my featured crew member is this report. Why it’s Weta Digital’s Eric Saindon! 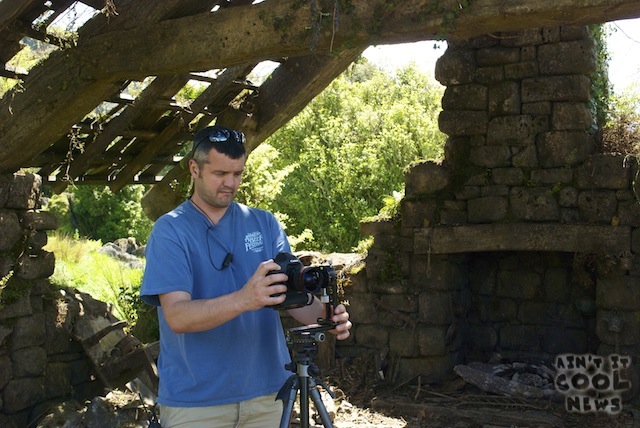 I knew early on that I’d feature Eric because he figures into my daily set routine at least a dozen times. I’m not used to there being other Erics around, so when somebody says my name I automatically assume they’re addressing me.

Many times a day Eric, the visual effects supervisor on set, is called to action and every goddamn time I turn around like an idiot thinking someone’s calling me. In fact Peter Jackson just recently called out for Saindon during a rehearsal by going “Is Eric here? Where’s Eric?” He looked at me and I raised my eyebrows in a “Me?” way and he said, “Not that bloody Eric. Where’s Eric Saindon?”

Eric has been part of the family since Fellowship and has been kind enough to invite me in to cop a squat in the VFX tent on location, which gives me a clear view of the monitors, protection from the wind/rain/harsh sun and some great conversation.

He started his career with (admittedly) one of the worst Star Trek movies (Insurrection), but got pulled into the Weta Digital family on LOTR and stayed after for Kong, Avatar and now The Hobbit films.

So, what’s Eric doing in that picture above? That’s the inside of an abandoned farmhouse which will feature in the next report and what Saindon and his super hip team (comprised of Seb Abante, Kevin Sherwood, Brian McMillin and Adam Harriman) do is essentially get as much detail and info about a location/set/prop as possible.

Above, Eric is taking photos of the entire set, piece by piece, area by area, so he can build a digital replica of the environment if he needs to. Sometimes he knows he has to recreate a prop or section of a wall or rock or whatever, sometimes he doesn’t, but wants to keep the info anyway.

It’s usually Eric, Seb or Adam doing this work with Brian manning a 3D scanning device called a Leica. When you see those little orange strips of tape on a greenscreen or on a rock it’s for this scanning device.

Brian or Adam typically use these strips as tracking markers, noting their location in the Leica and doing a full scan of the set. What they end up with is a ton of data, 1s and 0s that represent a detailed 3-D representation of the entire scanning area.

Eric told me that he can take these high res photos he takes and basically lay them over this framework and have a near photoreal recreation of the shooting area, which makes it easier to roll with digital additions, subtractions and CGI creatures (like Wargs, for instance).

That also helps him digitally recreate props to be as close to the physical prop should he be required to.

Since most of the Weta Digital team on the ground at main unit is American we’ve kind of turned the VFX tent into the American Embassy on the set, with discussions of how we’re going to celebrate Thanksgiving and how we miss simple things, like 24 hour stores, free refills, actual Mexican food, unlimited internet and other such American topics.

So, I’m going to cheat a little bit and also include a couple shots of the guys so while this is really Eric’s feature I’m gonna throw some love on his team, a group of awesome guys. I’ve only left out Brian but that’s because I have a good shot of him sharing a helicopter ride with me in a future report.

Here’s Adam (left), Eric and Seb (right) along side the Leica looking concerned about whether or not there’s enough tracking markers put up in a shot. 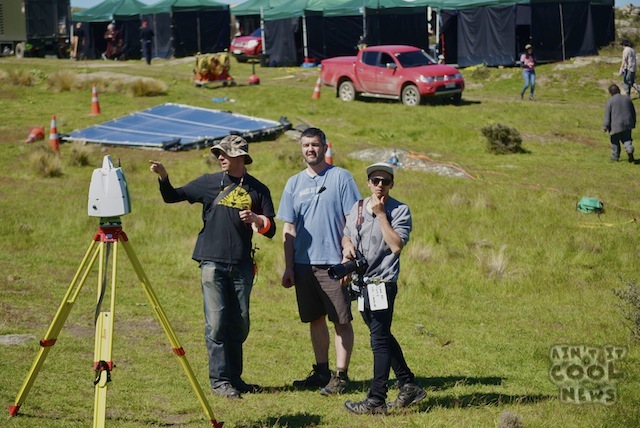 Next report takes us away from the Mangaotaki Rocks and on to some sacred Maori land. Here’s a sneak peek: 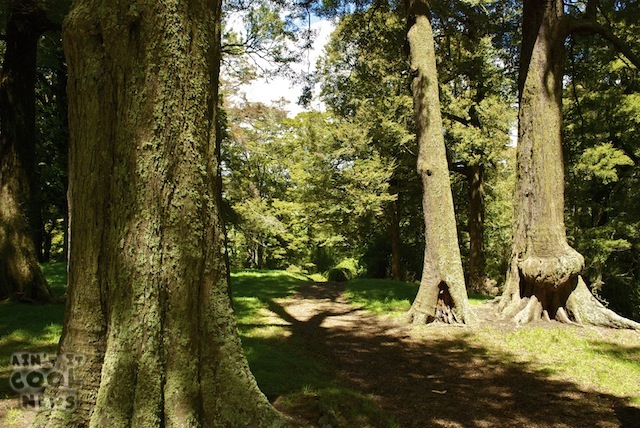 See you folks for that one very soon!

Click Here to Read An Unexpected Journey Part 2 – They Call Me Mr. Chubb