An Unexpected Journey: Quint on the set of The Hobbit Part 4 – A Palaver of Istari

Welcome, welcome to the fourth set report from the set of The Hobbit and the very first from a brand spankin’ new location!

We started in Matamata (Hobbiton) and the plan was to work our way down the North Island of New Zealand, zig-zagging south until we hit Wellington again where the 450 strong main unit would board planes and ferries bound for the South Island and the bulk of location photography.

Upon departing Hobbiton I made my way to a small town called Te Kuiti. This lovely little farm town is famous for being home to (Colin Meads), one of the most revered All Blacks of all time. The dude is so famous that my place was on Meads St.

This new location was on remote lands, so the production had to house the sizeable cast and crew in the small towns surrounding the location. There weren’t many hotels or motels, so the vast majority of us were put into houses. And not just rental houses, either. People graciously gave up their homes to the cast and crew. I felt a little like a Civil War soldier requisitioning someone’s home as my regiment was on the move.

At first I thought there might be a mistake. The house was an old two story place with a swimming pool to the side, stretches of green farmland populated with cows and sheep to the rear and a private drive leading up.

I’m still convinced that I was accidentally thrown into one of the dwarves’ place by mistake and they felt too bad to move me out.

Our location was Mangaotaki Rocks, a popular rock-climbing spot because of the distinctive bluffs, owned by the Denize family. 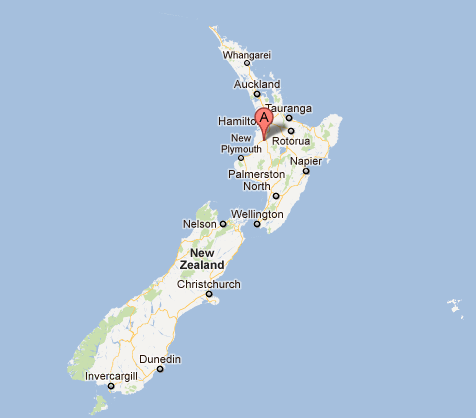 You know where on Earth that spot is now, but where on Middle Earth is it? This was to represent Trollshaw, where Bilbo and the Dwarves run into the Stone Trolls. That scene has already been shot on stage, but they needed some real, beautiful jungle for a few scenes afterwards.

Not only that, but there’s an abandoned and rundown farmhouse the talented crew erected about 70 feet from the edge of the forest for another shot entirely. So, one location, two places in Middle Earth.

First up was Trollshaw as 13 dwarves, a wizard and a hobbit search for the troll’s stash of rich stuff in a beautiful, misty forest. Here’s a pic of me out in it with my fancy new outdoorsy hat:

Some of that was natural mist and dust kicked up by the production trucks driving up the dirt roads to the set (which I was told were actually cut into the hills by the production in order to get the shooting equipment to the location, with the consent of the Denize family of course) and some of it was manmade in a quite clever manner. 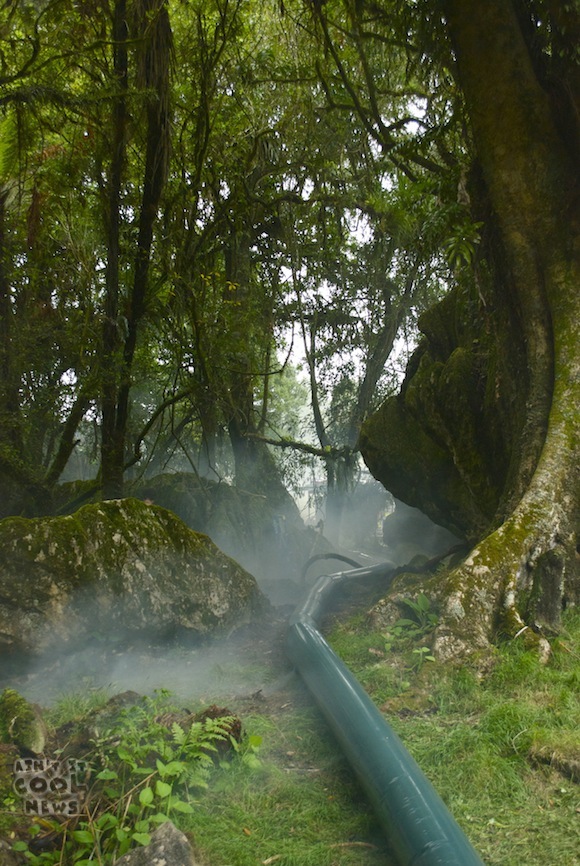 Tall Paul (Paul Randall, who is well over 7’ tall) stands in for Sir Ian McKellen so the dwarves are the correct height in the shot. More on him later.

Sir Ian is there and is delivering some lines for this wide shot, giving Tall Paul his cues to wave an arm or shoot a look back over his shoulder to the dwarves and giving the other actors in the scene the real Gandalf to react to.

Gandalf (affectionately referred to as “Gandy” by the crew) is essentially shouting orders to the dwarves to search the area, in a way acting like a parent chaperoning a school field trip, trying to keep everybody on task. Sir Ian came in for the next set up, which was closer. With the incline of the slope and various dips and valleys to the landscape they were able to get Sir Ian and the dwarves into the same shot without using doubles.

It is Bilbo who finds the entrance to the troll cave, which was a giant rock set out at a sharp angle over the forest floor. A set had been constructed a good 100 feet away, but Peter didn’t like it, so they used this natural spot for the mouth of the cave. There was talk that there might be a new interior set constructed back in Wellington for reverse shots.

As you’d expect, this cave had some good stuff in it. Chests, swords (including a rusty Rohirrim sword) and some dead dudes, like this unfortunate gentleman: 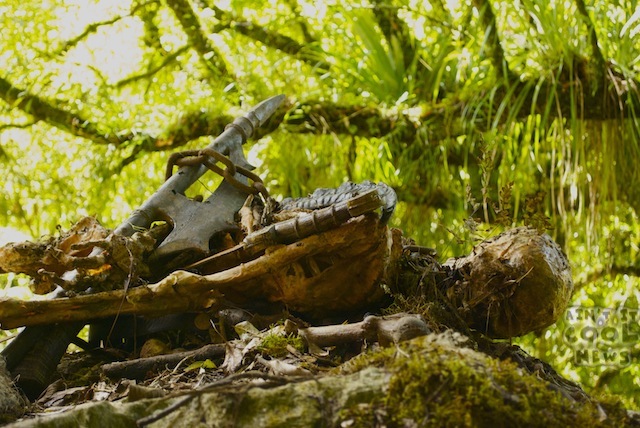 Tolkein fans know that this marks a big moment as a rather important weapon is introduced to the Baggins family.

Amongst the stash of treasure and weapons taken from poor dwarves, elves, orcs and men captured and eaten by these trolls is a tiny elvish blade, barely bigger than a dagger for a regular man, but just the right size for a Hobbit.

Unless I’m misremembering Fellowship, Peter Jackson filmed Gandalf handing Sting over to Bilbo to mirror Bilbo giving Frodo the sword in LOTR. In other words, he makes a moment out of it. With the beautiful green forest in the background (cave entrance), Martin reluctantly receives the sword, pulling it slowly out of its sheath.

Thorin gets Orcrist here as well, which you can see him wield in his promo picture by the way. Orcrist is a long, flat blade and they filmed a scene of Richard Armitage swinging it down in a wide arc striking down a leaping evil thing to be added in digitally before all is said and done.

Kili uses a bow and arrow and the rest of the team have their own different weapons, like Graham McTavish’s Dwalin wields two axes and William Kircher’s Bifur more often than not uses stabbing weapons like spears. There’s also single axes, clubs and even cooking spoons as in the case of the fattest of the dwarves, Bombur (Stephen Hunter), who I’m convinced was modeled after Harry.

Check out Stephen chilling out between takes and tell me Harry didn’t play a part in the inspiration for the design of the character! 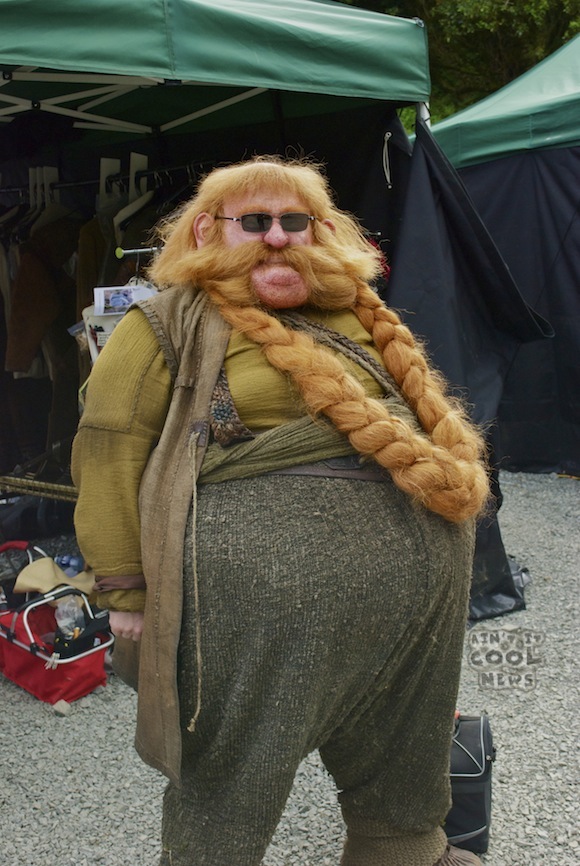 Not only did this location play host to the giving of Sting, it also featured a palaver of Istari.

That’s right, Gandalf and Radagast share a scene as well. Sylvester McCoy plays Radagast the Brown, a somewhat kooky wizard who is more at home with animals, insects and flora than he is with people.

Based on what I’ve seen over the last few weeks I think it’s going to be a toss up between Bombur and Radagast on who will steal the movie. Bombur is just so loveable and funny and Radagast is ridiculously endearing, an absent-minded St. Francis of Assisi.

Radagast comes with a word of warning that foreshadows some trouble our group will run into later. The words “Mirkwood,” “webs,” “Ungoliant” and “Dol Guldur” are mentioned.

The production avoided being rained out of Hobbiton, but there was some wetness in this location. Luckily the rain was inconsistent, very rarely heavy and the scenes within the wooded area had an extra level of protection due to the canopy, so we never had to move to wet weather cover shooting. If you’re not sure what that is, I’ll give you a brief explanation.

When shooting on location, especially in a place like New Zealand where the weather is quite often unpredictable and uncooperative, production has a Plan B in case of weather stopping the planned filming for the day. This shooting is usually moved inside and is fairly simple moments that could easily be done on a stage.

For instance, the wet weather cover for The Hobbit as it tours around New Zealand involves greenscreen shots of Gandalf and Bilbo being carried by the eagles. These shots are needed, but not something taxing for the actors to have prepared in their back pockets at a moment’s notice. It’s also easy to set up and doesn’t need a whole lot of built sets and props on hand. 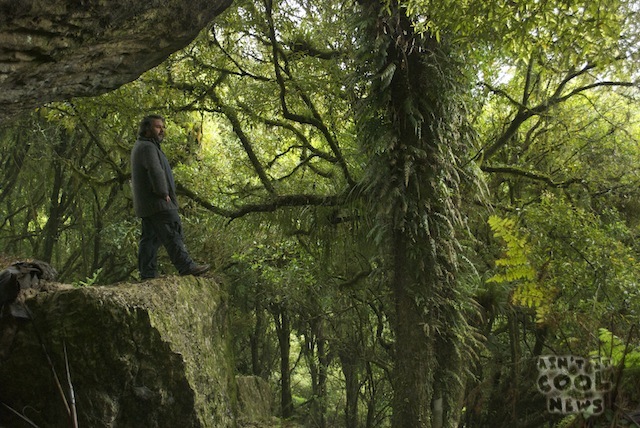 From what I gather from the crew, it’d take a Terry Gilliam-level catastrophe to stop Jackson from shooting on location. It’s rare he buckles down and moves to wet weather cover.

As I said before, it was lucky that we were shooting in the wooded area because even though it looked like this at tent city 20 steps away: 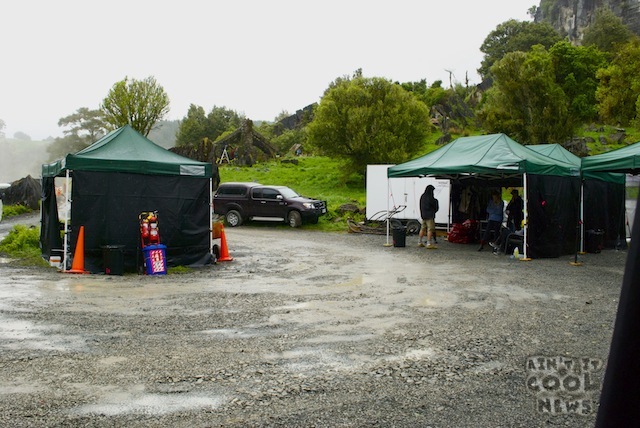 It could still look like this in the trees: 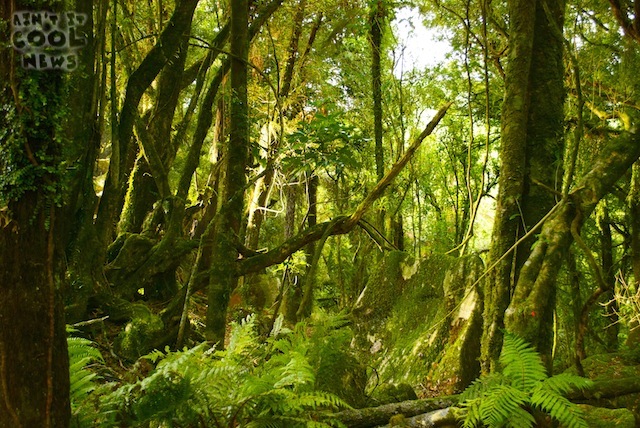 Due to the complexity of shooting a group of different sized races they had to do an effects shot in this location. As Radagast arrives and talks with Gandalf the dwarves look on, distrusting this newly arrived individual. Bilbo is there as well and is obviously taken aback by this weird man (even once pulling an Office and looking at the camera with wide eyes, head slightly shaking… how cool is that?).

The wizards are taller than the hobbit and dwarves, naturally, and Peter wanted to get a wide shot of the entire team. Shooting in 3D makes it difficult to pull the same forced perspective tricks he used on Rings, so getting this shot will require some digital tinkering.

There’s a motion control process being used on this project that is quite spectacular and I’ll go into in a later article, but they did a simple version of it here for this wide shot.

They locked off the camera on a platform looking down on the action and had Sir Ian and Sylvester do their scene with two greenscreen flats set up in the background that just barely outlined both wizards. After Peter got what he wanted in terms of performance for this static shot they removed the greenscreens and wizards entirely and brought in the dwarves and Bilbo.

Sir Ian and Sylvester remained off camera to give their dialogue so the dwarves could react correctly.

Since it’s a locked off camera Weta Digital’s team should be able to pull out the normal sized wizards and enlargen them before replacing them into the shot with the dwarves, making the scale work. Even in this simplified version it’s a complex shot, making sure the wizards, Bilbo and the dwarves are all their correct heights.

Like I mentioned before there’s a much more technical process to get this effect that is really quite remarkable, but I’m saving that for a future report.

That about wraps things up on this one. The next report stays in Mangaotaki with more dwarf action and will be up rather quickly, so keep an eye out.

Let’s look at our featured crew member, then. With all the talk of Tall Paul, I figured it was about time to spend some time with Paul Randall. 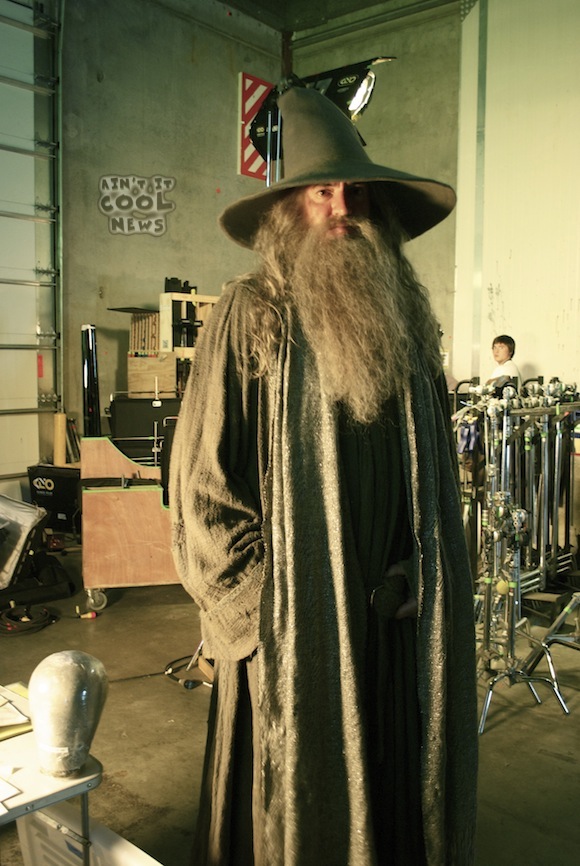 Many LOTR fans should recognize Paul from the appendices on the Rings DVDs. This Kiwi native stands over seven feet tall and has been crucial in the success of selling the size differences between the races in Middle Earth.

As you can see in the picture above he’s mostly being used as Gandalf’s stand in and it’s pretty eerie just how much he looks like Sir Ian when in full Gandalf getup. There are some shots from the side where all you can see is beard, hat and nose and that’s enough to make your brain register Gandalf, even in person.

Paul has worked closely with Sir Ian to make sure his Gandalf moves in much the same way as Sir Ian’s.

Before playing Wizards, Tall Paul was, believe it or not, a cop. Can you imagine being pulled over by that guy!

He’d be intimidating if he wasn’t such a nice guy. Always quick with a joke and an easy-going attitude Paul is one of the guys that makes spending 12 hours a day on the set a blast.

So, hats off to Tall Paul!

Next up is a small report about a big dialogue scene. Richard Armitage fans will be interested in the next one, I guarantee it. See you then!