Nordling Says THE MUPPETS Is A Joyous Treat! 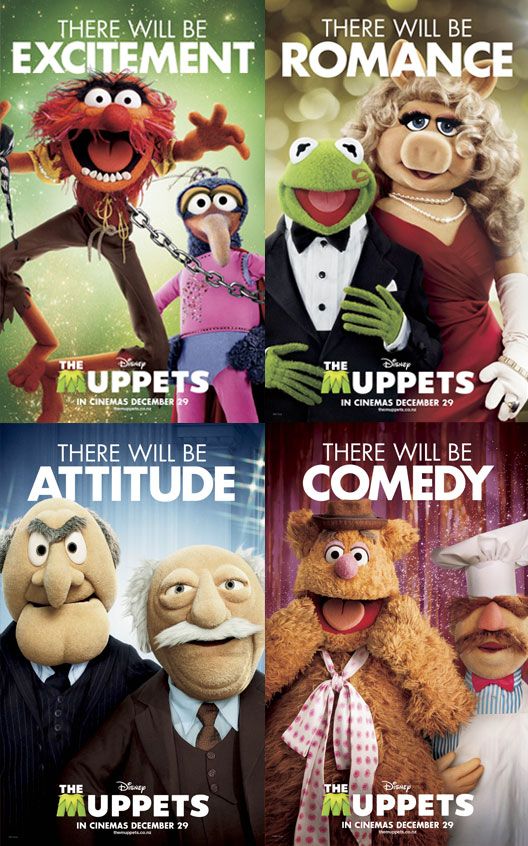 It's funny.  I've been chewing over this review for several days now.  I already realize what's probably expected of me, considering all the love I've shown the Muppets these past couple of weeks.  If you're looking for a quick fix in regards to the quality of the film, that's pretty easy - THE MUPPETS is surely worth your time and money this weekend.  It's appropriate that THE MUPPETS opens Thanksgiving weekend, because I can't think of a better film to see that takes stock in all the good things we have, and in all the joys that come from just living life as best as you can.  But for me, THE MUPPETS is just a confirmation of a long-held belief that I've felt since I was a child, and that I know for a fact is the way to live my life.

We live in a cynical world.  So cynical.  And I thought they couldn't get more cynical than the 1990s, with O.J. Simpson, the various D.C. sex scandals going all the way up to the President of the United States, and the general malaise my generation felt at the time.  Just look at the music - "Here we are now, entertain us" isn't a rallying cry, it's a declaration that we have nothing to prove anymore, nothing to teach, nothing to say.  We are here to enjoy the party while the world burns, nothing more.  And although that line comes from a great song by a great band, it was, to me, always something of a warning - if we don't watch it, we could become as cynical as the world around us, and nothing matters.

So when the Muppets perform "Smells Like Teen Spirit" in the film, and barbershop it up, with Jack Black screaming, "You're ruining the song!", it feels like a genuine catharsis.  They take all the malaise and angst and turn it into something silly, and in doing so, make a statement that life is to be lived, experienced, and not something that should just be absorbed in disdain and cynicism.  It's joyous in the way the Muppets take that song and make it their own, at least for the few minutes it's onscreen.  I think Kurt Cobain would have approved, and even if he wouldn't, so what?  It's no accident that Dave Grohl shows up in the Muppets as well, and it's perfectly fine.

THE MUPPETS is a great movie.  It's great because its message is true - that life is a grand, wondrous thing, and should be celebrated.  That friends and family are better than gold.  That there is more joy than despair out in the world, even if it's sometimes difficult to see.  And THE MUPPETS says to me, more than anything else, that we don't yearn for simpler times, or simpler entertainments.  It's not just nostalgia that makes THE MUPPETS great - it's the fact that bringing joy and laughter to other people is probably the greatest gift a person can give themselves, and these guys have been gone far too long.

You all know the plot by now - the Muppets, with the help of Gary (Jason Segel), Mary (Amy Adams), and new Muppet Walter (voiced by Peter Linz), must put on a telethon to raise $10 million to keep their studio from being torn down due to the evil machinations of Tex Richman (Chris Cooper).  To put on a show, Kermit must bring all the Muppets back together - they parted many years ago when the audience lost interest - but in a world gone cynical, do the Muppets even matter anymore?

I love how the film embraces being a musical.  It commits to each and every number, including a hilarious rap by Cooper describing just how evil he is, and Cooper sells it perfectly.  The opening song, "Life's A Happy Song", is one of those melodies that traps itself in your head and never lets go.  "Pictures In My Head" has Kermit waxing rhapsodic about his former Muppet-mates and the life they had together, and "Man Or Muppet" is a duet by Gary and Walter that might be the best musical representation on geekdom that I've ever heard.  The songs, written by Bret McKenzie (FLIGHT OF THE CONCHORDS), are infinitely charming and work to move the plot forward, and never drag the film down.

I love how the story works on multiple levels, but anyone who has ever seen THE MUPPET SHOW or the first three films shouldn't be surprised by that.  When kids and adults are laughing together, for entirely different reasons, it's part of why the Muppets have worked so well over the years.  They're the gift that keeps on giving.  The script, by Jason Segel and Nicolas Stoller, is witty, funny without being crude (even the fart shoes are a commentary in their way), and in the end, you can tell just how happy that these guys are writing a script for a new Muppet movie.  James Bobin keeps the film moving - it's really something that Bobin keeps the Muppet-less opening going and holds our interest, even when we're waiting for the gang to arrive - and the comic pacing of the film is terrific.  The film has confidence and doesn't take a single false step.

I've always been a Kermit guy.  Yeah, easy choice, but there it is.  Kermit for me represents boundless optimism and happiness, and it's what I've strived to live all my life.  Jim Henson taught me how to read.  I imagine he taught many of you reading this.  SESAME STREET is a cultural touchstone for many of us, and we moved to THE MUPPET SHOW and the films because we responded to that joy and optimism and humor.  Even when life seems bleak, "Mah-na Mah-na" still never fails to put a smile on my face, or Lew Zealand's fish toss, or Fozzie's bad jokes, Gonzo's... Gonzoness... even Sam the Eagle's disdain for everything poked fun at how ridiculous it was to dislike everything.  Statler and Waldorf are probably the ancestors to everything we do on the Internet nowadays, but they have so much more wit and joy, even when they constantly tear the other Muppets down.  Miss Piggy loves her frog, even through difficult times, and it's telling that the generation that got used to the idea of these two in love has been the most accepting of other people's lifestyles.  Love is what it is, and the Muppets know that better than anybody.

I've rambled on long enough.  THE MUPPETS is easily one of my favorite films of the year, and I'm so thankful that Jason Segel helped bring them back.  Frank Oz recently disparaged the project, and while I understand that it's hard letting go of something you've been associated with your entire life, sometimes the best thing is to let other voices in.  I think people will be surprised by how much Segel, Stoller, McKenzie, and Bobin got right, and it's not simply through the filter of nostalgia.  They completely get what makes the Muppets intrinsically work - again, that boundless optimism, and that famous mantra from THE MUPPET MOVIE:

Write your own ending

We have done what we've set out to do

Thanks to the lovers, the dreamers,