Your Favorite Repertory House Needs Your Help! Sign A Petition To Fight For The Continued Exhibition Of 35mm Film! 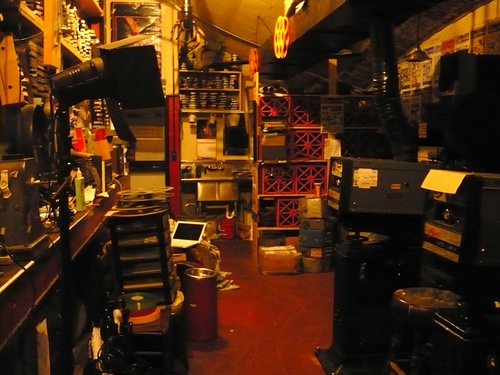 A month or so ago, I purchased tickets for a STRIPES/CADDYSHACK double feature at the American Cinematheque's Egyptian Theatre, one of the leading repertory houses in the country. Though neither film is a visual marvel, I was excited to have the opportunity to see, for the first time in my life, two childhood favorites in a theater projected in 35mm. But my enthusiasm dissipated when I noticed a small-type disclaimer at the bottom of the program: CADDYSHACK would be digitally projected from the recently-released Blu-ray. No thanks.

While I was grateful for the heads up (I've been to a few repertory screenings over the last year - neither at the New Beverly or the Cinefamily - where substandard digital copies of films with easily-obtainable studio prints were blown up to murky, pixilated effect), I couldn't understand why the Cinematheque had failed to secure a 35mm print of one of Warner Bros. most popular library titles. After wondering aloud on Twitter, I got my answer: Warner Bros., and most of the studios in town, are beginning to retire their prints.

Look, digital isn't the future anymore. It's the present. Aaton, ARRI and Panavision are no longer making film cameras; digital projection is becoming the norm; and most of our great living filmmakers and cinematographers have made the switch. There are a few notable holdouts - e.g. Steven Spielberg and Quentin Tarantino - but once they've retired, the film era will effectively be over.

What happens now? Well, if the studios have their way, they'll keep their prints locked up for posterity and feed repertory houses digital copies that will show their muddy limitations when blown up on a big screen. And this applies - to varying degrees - to all digital copies. I've seen the brand new 4k restoration of RAIDERS OF THE LOST ARK twice now - once from the back half of the Samuel Goldwyn screening room at the Academy of Motion Picture Arts & Sciences, the other time from the fourth row of the main theater at L.A. Live. The first experience was wonderful, the second dreadful, revealing the current limitations of even a top-tier 4k projection.

Most films are not going to receive the RAIDERS OF THE LOST ARK treatment, which leaves me dreading the future of repertory moviegoing. I've made my peace with the digital revolution (though few studio filmmakers seem to know how to get quality images out of the cameras they're using), and understand the desire to avoid incurring unecessary expenses on the film rental/preservation side of things. But this is a century of art we're talking about here, shot on film and intended to be viewed on film. You don't need to strike hundreds of new prints all the time. Just take care of the ones you have, rent them when requested, and, if one gets damaged, strike one new copy to replace it. It's a not-unreasonable expense the studios should be willing to absorb.

If the studios continue down this path, they will very likely run repertory houses like The New Beverly out of business. The communal experience is one thing, but the 35mm presentation is just as important. And if it's just going to be digital copies of our favorite movies, most people will just stay home and watch them on Netflix. This is unacceptable.

Want to voice your support for the New Beverlys of the world? Allow me to direct you to a petition started by the wonderful Julia Marchese, and directed at the major studios. If you care at all about repertory cinema, you need to sign your name in support of 35mm exhibition. Please do this immediately, and rally your friends to the cause. The situation has grown incredibly dire over the last year, and there hasn't been a significant push back from cinephiles. So I'm counting on the legion of movie mad AICN readers to add their voices to the choir. I can't guarantee that this will change the studios' mind, but we've got to do something.

One final thought: last spring, I attended the Reel Grit Six Shooter on the AFI campus. It was an all-day marathon of movies - all projected on 35mm - celebrating the accomplishments of AFI grads. The unexpected highlight of the day was THREE DAYS OF THE CONDOR, which was screened via a pristine studio print. I know the rental wasn't cheap, but the presentation was sublime. I've seen THREE DAYS OF THE CONDOR many times, but I'd never appreciated the rainy urban nuances of Owen Roizman's cinematography. It was a revelation. I felt like I'd never truly seen the film until that afternoon.

I dearly want other movie lovers to have this experience. Watching movies is about going to the movies. And we go to the movies to for an experience we can't get at home. 35mm may be the past, but studying and celebrating the past is what will sustain this industry and art form into the next century. Let's not keep it hidden away.