Werner Herzog And Mr. Beaks Gaze INTO THE ABYSS! 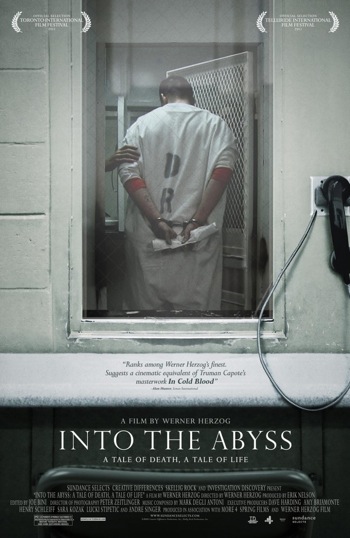 In the prologue of Werner Herzog's documentary, INTO THE ABYSS: A TALE OF LIFE, A TALE OF DEATH, a death row chaplain who administers last rites to the condemned explains how he finds solace in the lush, tranquil beauty of the golf course. He describes how he is moved by the occasional run-in with an animal, even one as insignificant as a squirrel. So Herzog follows up with a question probably no interviewer on the planet would ever think to ask: "Tell me about an encounter with a squirrel." And so he does, recalling a time when a squirrel darted in front of his golf cart, and how he was able to break in time and spare the animal's life. A few seconds later, the man whose job it is to observe the execution of countless prisoners every year is in tears.

Herzog only had an hour with this chaplain, but he elicited this profoundly moving response by picking up on the man's sensitivities. Why did he single out squirrels? Why not ask? Herzog employs this intuitive line of questioning with all of his subjects in the documentary, and the result is a quietly devastating contemplation on the fragility of life and the finality of death. This is obviously well-trod ground, but by examining a senseless triple homicide committed by two morally adrift Texas teenagers (one of whom, Michael Perry, is scheduled for execution without a prayer of a stay), Herzog emerges with an reasoned and empathetic portrait of a system - capital punishment - that serves no greater good.

But this is not advocacy filmmaking. The first third of the film objectively walks the audience through the grisly details of the murder. From there, Herzog turns the movie over to the sorrow and residual anger of the victims' family, the frightening congeniality of the condemned and, most movingly, the regret of a former death house captain, Fred Allen, who after participating in over 100 executions has renounced the system altogether. Allen is the compassionate center of the film: he's a good man who experienced a crisis of conscience. Amidst all the discussion of death, there is hope in Allen's epiphany that life is not his, or the state's, to take.

When I interviewed Herzog last week, I was curious to learn why he chose this case, and how he earned the trust of his subjects. It was a brief chat, but Herzog's genius transcends time limits. It's always a pleasure to talk with one of our great filmmakers. 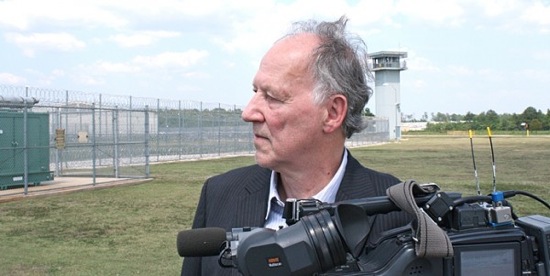 Mr. Beaks: Hello, Werner. This is Jeremy Smith from Ain't It Cool News. How are you today?

Herzog: Good, good, thank you. Staying awake with a double espresso. I am a working man.

Beaks: Careful not to have too many of those.

Beaks: What triggered your desire to make a film about the death penalty in America?

Herzog: It's not a film about the death penalty. It's a film about death. How should I say it... it's the title of the film: "Into the Abyss: A Tale of Death, A Tale of Life". It's very much about life, and the urgency of life as well. It's a coincidence, I guess, that this film which I started in June of last year that it comes right at the time of a rekindled debate about capital punishment. But it was very early in my adolescence when I wanted to make my very first film about not death penalty, but the maximum security prison system in Germany. Thank god I failed, because the project was really mature.

Beaks: Why did you choose this case?

Herzog: The senselessness. The staggering amount of senselessness. You see, if you have a bank robbery and somebody gets shot, that's tragic enough, but at least you can understand that there was an aim by the criminal: the cash in the bank. But in this case it's so utterly senseless that it really disturbs and disquiets me.

Beaks: How easy or difficult was it to gain access to the perpetrators and the victims' families?

Herzog: With the perpetrators there are clear rules: you have to write them, and, only if they write back and invite you, then you have to take the next step. You have to ask the state of Texas or the state of Florida or whatever. Normally it would be the warden, if he would allow it. And then of course you should rather ask the attorneys of the inmate. In one case, an attorney found it unwise for his client on death row to talk to me because there was an ongoing appeal. The attorney told me, "My client has a tendency to say stupid things which might diminish his possibilities, his chances in this appeal procedure." So I immediately stopped the whole thing and didn't do it.

Beaks: For someone who is so close to being executed, Michael Perry seems shockingly upbeat. How long did you interview him, and did you ever get a sense that he was covering up his fear or felt genuine regret for what he did?

Herzog: Well, it's hard to judge because the time I had with him was limited to fifty minutes, and I couldn't have any second conversation with him because eight days later he was executed. But he looks like a lost kid, almost in the same class as James Dean. However I have seen quite a few men and one woman on death row, and according to my instincts no one was as dangerous as he was. I think he was the most dangerous of anyone I ever met. But he looks like a kid and laughs and is joyful, and at the same time he's the only one I would be scared of.

Beaks: You get remarkable insight out of Lisa Stotler. How long did you have with her, and was she initially guarded?

Herzog: I had one hour with her in my entire life. I went there and started shooting, and my getting to know her is on tape. Every single person in the film I met with one hour or less - with only one exception, Melissa Burkett, the wife of one of the perpetrators who is in prison for life. I met her before shooting. All the others I had twenty, twenty-five, fifty or sixty minutes, and that was all I had in my entire life with them.

Beaks: Was that your choice?

Herzog: Well, the prison system wouldn't allow you more than an hour. The death house chaplain with whom I speak at the beginning, he came on the set tapping at his wristwatch saying, "Quick, quick. I have to be in the death house in forty minutes to assist an inmate who is going to be executed." Which I think is okay. You have to be able to cope with it. If you're a professional, you have to come up with a decent result.

Beaks: I was very struck by Fred Allen's description of how he did his job as the captain of the death house. He took a real blue collar pride in his job.

Beaks: It left me wondering why he chose this profession in the first place.

Herzog: I do not know. I think he was a regular, straightforward Texas citizen with great integrity. Otherwise, I don't think he would've been chosen for this job, to spend the last eight or ten hours with inmates who were going to the execution chamber. You see, I always hear this Texas bashing, which I do not like. You find some of the best of the best of men and women in Texas. You look at Fred Allen, he is Texan, and an American cannot get any better than him. He should be a national treasure.

Beaks: At the end of the film you get Lisa to admit that life in prison would be an acceptable alternative punishment. But nearly everyone you speak to in the film, they just accept the death penalty as a fact of life. It's an institution, and it's not going anywhere. They're inured to it.

Herzog: It reflects the mood of the vast majority of the electorate. You see, I'm not in favor of capital punishment. As a German, I respectfully disagree. And when I say "as a German," it's because the historical background I have is a different one. I would be the last one who would ever try to tell the American people how to handle criminal justice. That would be absurd. So I respectfully disagree.

I respectfully urge you to check out INTO THE ABYSS when it comes to a theater near you. It's currently in a few select locations, and will be expanding throughout the country over the next month. Check out the film's official Facebook page for full release details.