Mr. Beaks Gets An Early Look At Rian Johnson's LOOPER! 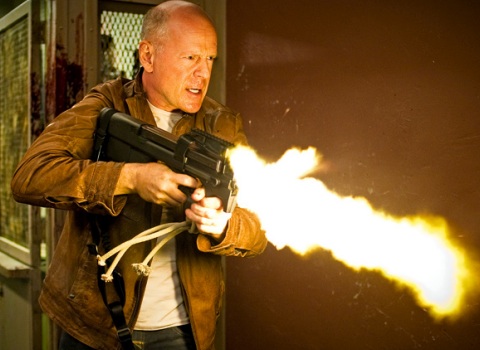 Rian Johnson's LOOPER is a time travel film set some thirty years in the future before time travel has been invented. The title refers to hit men who've been contracted by gangsters thirty years off in the more distant future - where time travel, while banned, exists - to dispose of people where no one would possibly know to look for them. Basically, the loopers hang out in an inconspicuous location (a back alley, a field out in the country), wait for their bound-and-hooded quarry, and blast them with a blunderbuss the second they materialize. It's a split-second execution, after which the loopers retrieve silver taped to the back of their victims. This is their compensation. If the victim arrives strapped with gold bars, that means the looper has just offed his future self. This is the closing of the loop. Retirement. Commence thirty years of partying until their dying day.

But what happens if there's a moment's hesitation, and the looper somehow senses he's about to end his own life thirty years hence? Or, in the case of Joe (Joseph Gordon-Levitt), what happens if his older self (Bruce Willis) turns up with a plan to thwart his execution so he can run off and rummage through his past for personal reasons, thus jeopardizing young Joe's hard-earned retirement?

This is the clever central conflict of LOOPER: two versions of the same man - separated by thirty years - at odds with himself over his future. It's a rather heady quandary, but it's examined in the mainstream-skewing framework of a crackerjack sci-fi/action flick that recalls the genre-blending daring of the '70s and '80s. And it's not just a time travel movie. Just when LOOPER seems to be settling into one type of film, it veers off in another direction, then settles down again, then goes absolutely bonkers without sacrificing clarity of story or theme. This is masterful filmmaking - a stirring reminder that genre entertainment can be both smart and accessible.

The future world presented in LOOPER is dystopian, but this is only a problem for the have-nots. The loopers have, and they while away their non-killing hours hitting clubs, getting fucked up, and stashing away as much of their blood money as possible without running afoul of the Gat Men. Clad in black, armed to the teeth, and overseen by a mysterious man from the future (a wonderfully casual Jeff Daniels), the Gat Men police the loopers. They're the elite squad that gets called in when a looper neglects to murder his future self - and they are brutally efficient at using the younger looper to bring in the fugitive elder.

Joe doesn't seem the type to make this kind of mistake. He zips around in a vintage sports car, carries on with a hot-to-trot showgirl (Piper Perabo), and maintains an amicable relationship with the head of the looper program. But when one of Joe's twitchier colleagues (Paul Dano) shows up at his doorstep seeking shelter after failing to close his loop, he succumbs to a weakness of loyalty and hides the doomed bastard. This draws the heat of the Gat Men (including the hapless-but-dogged Kid Blue, played with hilariously psychotic zeal by Noah Segan), which plants the seed of doubt and knocks Joe off the easy-retirement path. There's decency lurking in this killer, the kind a good woman can tease out under the right circumstances.

But this is no straightforward tale of redemption; once Johnson's established his world, he hurls nothing but wicked curveballs until the final scene. The plot described above encompasses only the first third of the film; the minute Willis shows up as old Joe, everything is knocked off kilter, resulting in multiple track-downs of very different targets. Ultimately, young Joe is forced to seek sanctuary in a remote farmhouse owned by Sara (Emily Blunt), who's fiercely protective of her precocious son Cid, while waiting for the Gat Men - or perhaps the vengeful older Joe - to turn up.

And this is where it sucks to be reviewing a film ten months out from release, because I'd love nothing more than to dig into the mindblowing complications that ensue. Without giving too much away, Johnson strays into another subgenre - one of my favorites - and nails it emphatically. And it's a completely organic shift, one that requires an emotionally conflicted performance from Blunt. She's sensational in this movie, balancing shoot-first survival instincts, maternal depression and long-suppressed desire.

Surface-wise, the most shocking element of LOOPER might be the bold physiognomical transformation of Levitt. Via the magic of carefully-applied makeup, he's altered his appearance - with a notable flattening of the nose - to more closely resemble Willis. It's startling, but not distracting. And since Levitt has gone this extra mile, Willis sort of meets him in the middle by acquiring some of his performance tics (there's a great slow-motion scene where Willis approaches a woman with Levitt's convivial bearing). But Willis also recalls his sad, broken-down character from 12 MONKEYS; his Joe is a man who gave up a great deal, got right with the universe, and isn't terribly happy with what he received in the bargain. And Levitt's young Joe is a character in transition, struggling to take stock of the man he might become while unavoidably living in the moment.

LOOPER is an intricately structured story enlivened by Johnson's trademark wit and wounded romanticism. It's an invigorating, thrilling, ceaselessly inventive film, a miracle in an era of by-committee studio filmmaking. And while it's still months from being finished, barring any postproduction monkey business, it's already a great movie. I can't wait to discuss it in greater detail.