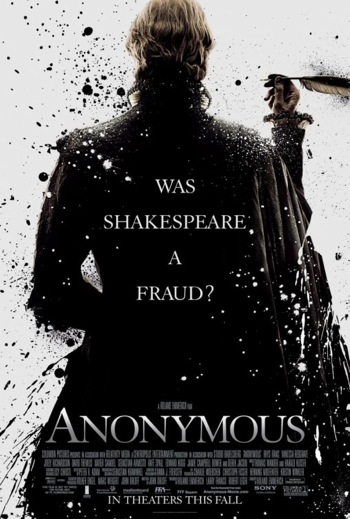 He’s destroyed New York City, Los Angeles, Washington D.C. and the rest of the world several times over, but with his latest film, ANONYMOUS, Roland Emmerich has targeted for destruction something more culturally sacred: the belief that William Shakespeare actually wrote all of his plays and sonnets.

The questioning of Shakespeare’s authorship is nothing new (anti-Stratfordians have been at it since the 19th century), but this is certainly the first time the Bard’s legacy has been vigorously attacked in a handsomely mounted motion picture starring some of the greatest Shakespearian actors of any era. Derek Jacobi kicks off the John Orloff-scripted drama with a provocative monologue asserting that the son of a 16th century glovemaker would’ve lacked the education and insight to compose the greatest dramatic works of all time. We’re then treated to an alternate history in which thwarted romance and palace intrigue – all transpiring during the reign of Elizabeth I (played at different ages by Vanessa Redgrave and her daughter, Joely Richardson) - compel Edward de Vere (Rhys Ifans), the 17th Earl of Oxford, to secretly become “the soul of the age”. As for William Shakespeare (Rafe Spall), he is depicted as a drunk, attention-starved, thoroughly illiterate actor.

The film departs so drastically from the historical record that one might be tempted to imagine it as a scholarly variation on Marvel Comics’ WHAT IF (with Jacobi playing The Watcher). Emmerich and Orloff aren’t trying to pull one over; they’re just overindulging a long-debated conspiracy theory for their own (and hopefully the audience’s) enjoyment. And Emmerich has responded with the most intimate and controlled directing effort of his career. Though he does pull off some stylish, CG-enhanced overhead shots of Elizabethan England, he mostly keeps his distance, allowing his immensely talented actors to enliven Orloff’s screenplay.

While Emmerich is certainly pleased with ANONYMOUS, this is not his farewell to event filmmaking. As you’ll read in the below interview, he’s still pressing forward with two ID4 sequels, and he has zero interest in rebooting or scaling back. Whatever the next film is, it’s going to be big. And the world will probably be in for it once again. 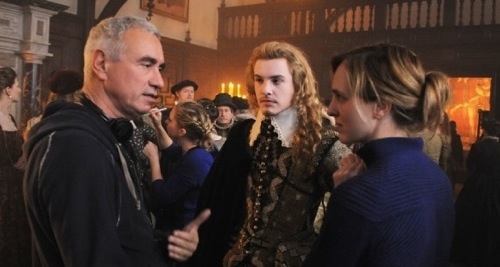 Mr. Beaks: Did you have any thoughts on the whole Shakespeare authorship debate prior to making this film?

Roland Emmerich: Well, when I grew up, and before I read the script ten years ago, I didn’t know much about this whole subject matter. I heard inklings about it, rumors, but nothing much. I actually heard more about that [Shakespeare] was supposedly gay and I was more interested in that anyhow. (Laughs) But then I read the script, and that introduced me to the subject matter. From there on, I started really reading up on it and doing my own research. Now it’s ten years later, and I’m 100% convinced that William Shakespeare of Stratford was not the true author.

Beaks: The theory that you present: do you think that that is the theory?

Emmerich: No, but it’s a possible scenario. I mean, who of us could ever say what happened 400 years ago? It’s impossible. But what you can do is you can invent a story how it could have been - in the same way that William Shakespeare did in his history plays. He also wasn’t there, so he uses historical drama to tell the things he wanted to tell people, and he doesn’t care too much about what was absolutely accurate. We are not doing a documentary; we are telling a story.

Beaks: You’ve said that at the beginning the screenplay emphasized creative jealously and was a little more like AMADEUS. Why did you decide to make this more about palace intrigue?

Emmerich: Because I took my inspiration from Shakespeare’s plays. I said to John [Orloff] “If we want to tell the story of the true author of the William Shakespeare plays, we have to make it very Shakespearian. We have to use the same themes that he used in his writing.” And most of Shakespeare’s plays, especially the tragedies, played at court. And we actually took HAMLET as our main piece, [as the] centerpiece of the movie to convey who William Shakespeare really was. And that’s actually what both sides… really agree on. There are only a couple of things they agree on, but they agree that HAMLET is his most autobiographical play.

Beaks: Did you ever direct any productions of Shakespeare when you were younger? If not, did you ever want to?

Emmerich: No, but it’s also that I grew up in Germany and Shakespeare is only performed the German language. So I knew of it. I can actually even today recite more in German than in English.

Beaks: That’s interesting. I’m not sure I’ve ever heard Shakespeare performed in German. How is it?

Emmerich: It’s very good. I think the German language works really well with Shakespeare. Also, it was translated by great writers themselves over the years.

Beaks: One thing I was really struck by visually was your recreation of the Rose and Globe theaters, and, in general, a bustling Elizabethan England. How did you go about doing that?

Emmerich: I always said to everybody, “I will do it my way!” I wanted to see wide shots. I just asked myself “How can we do that?” Then when I was doing 2012, I saw the first tests we did of normal LA streets in broad sunlight and they even fooled our cameraman with how real they looked. I knew the time was right for ANONYMOUS, because you don’t want to have anything look too CG in a movie like that. It had to look real, and people had to believe in it. So that was the moment when I decided, “I think I now should do it.” Then I actually approached the same people, the same two visual effects supervisors who did 2012 and many other of my movies, and said, “Would you care for doing something like that? I can pay you not even half. You maybe will get paid like if you would work for a TV movie and that’s it.” And they gladly said yes, which I was very happy about.

Beaks: And also rounding up such an amazing cast. You worked with two generations of Redgraves. I can’t imagine anything better for a director.

Emmerich: It was unreal, you know? There were a couple of moments where I thought, “Am I dreaming? What’s happening here?”

Emmerich: You direct her like every other actor. You very carefully make comments about it afterwards, you talk about the part a lot… I never rehearsed, so everybody had to do the rehearsing on the set. And then pretty soon you forget who you are kind of directing in a way, and are just mesmerized by what comes back. There were moments where I was directing Vanessa where I was so in the scene that I forgot to say “Cut.” She’d say, “Roland, cut.” I’d go “Oh yeah. Cut.”

Beaks: When you make a film like this, there’s a certain perception out there in some quarters where they are like “Who is he to be making this type of film?” How do you respond to that kind of perception of you?

Emmerich: I just make [the film]. (Laughs) I cannot be stopped by anybody. Most of the time it’s film critics - and I never read anything, so I’m unaware of it. I know that there are these people out there, but… I think luckily living in a society that has no censorship anymore, it’s a little bit better than in the Elizabethan age.

Beaks: This is true.

Emmerich: But only a little.

Beaks: What do you hope for your career going from ANONYMOUS. What kind of films are you hoping to make?

Emmerich: Everybody asks me that, and I don’t hope anything. I’m just a storyteller. I just want to see certain films on screen, and that’s all that I care about. I hope to always do a good job. I always learn if I did a good job, because I have to test movies you know? If the test is great, I’m happy. You cannot in any way do things and hope for certain things; it’s not a strong enough motivation to make a movie. The only strong enough motivation to make a movie is that you really want to tell the story. It’s just like that. But other movies are the same way: I fall in love with the subject matter, and I have to do it.

Beaks: I have to ask: where are we with further INDEPENDENCE DAY movies? Is Fox still interested?

Emmerich: Yeah, they are still interested, and we are still talking about it. It’s coming. It’s a longer process because so many players are involved, and I insisted on doing it exactly with the same people. I’m not going to do like a reboot or anything. Two years ago we came up with a really, really good story. Now, we only have to sit down and write it. Dean [Devlin] is pretty busy with his TV show and I do my stuff, but pretty soon I think we will sit down and write the first version. I think it’s about time. (Laughs) You know, it has to be good; a lot of people have to say “Yes, I like it.” Do you know what I mean? There’s the studio, there’s Will, there’s the other actors… I mean, it’s just such a long thing, but I think the readiness is there from all sides.

ANONYMOUS opens in limited release this Friday, October 28th. It will expand to more theaters on November 4th.