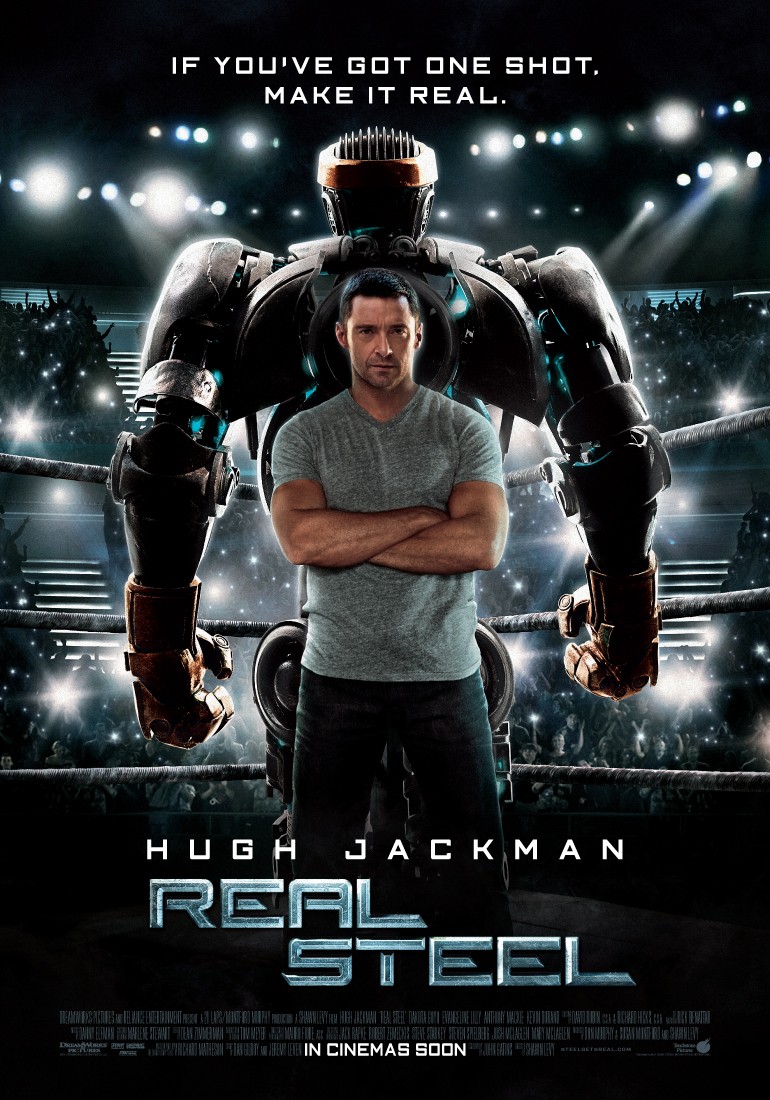 Call it ROCK-E.  Roger Ebert has famously said that it's not what the movie is about; rather how it's about it, and Shawn Levy's REAL STEEL proves that statement completely true.  There's nothing you can't see coming from frame one to the credits, but REAL STEEL goes about telling its story with such charm, wit, and optimism that it's hard not to fall in love with the movie a little bit.  REAL STEEL has got some of the best family films of the 1980s in its DNA, and Levy has found that sweet spot where you know what's going to happen next but it doesn't matter, because the audience is having such a terrific time with the  movie.  Personally, the movie had me when early on a giant robot wrestles an enraged steer at some backwater rodeo, as former boxer Charlie Kenton (Hugh Jackman) tries to make some money on the underground fighting circuit.

One of the best aspects of REAL STEEL is that exposition is done through showing, and not telling, so the film moves while giving the audience a lot of information about the world - it's the near future, and most sporting events are played with robots.  The most popular event is robot boxing, where Zeus, the current champion, watches his opponents' moves and cybernetically learns from them.  Zeus is currently undefeated, and Charlie's fighting his junker robots in underground illegal matches, trying to make some coin and fend off all the people he owes money to.  Charlie's about out of options and cash, but he gets an opportunity to get back into the robot fighting circuit when his son he never knew existed almost literally falls into his lap.

Max Kenton (Dakota Goyo) is in the care of his aunt and uncle, but now that Charlie's been located he can retain full custody.  Charlie's clearly not the father type, and so with an exchange of cash and a promise to watch him over the summer while Max's step-parents are away, Charlie is back in the robot boxing business.  Max knows he's just luggage, but he's a big fan of robot boxing himself, so he decides to stick around.  After another failed boxing match, Charlie heads to the scrapyard, and Max finds a training robot, Atom, buried at his feet.  Charlie lets Max bring Atom home to appease him, thinking nothing will come of it, but it becomes evident fairly quickly that Atom has something that many other robots don't - he can take a lot of punishment.  So with the help of gym owner Bailey (Evangeline Lilly), Charlie and Max decide to put Atom up against the big boys.

Anyone who's ever seen a movie before knows how this works, but Hugh Jackman plays Charlie with sheer fun and intensity, and he wins you over.  It is, no kidding, probably his best work onscreen since THE FOUNTAIN.  It's an earnest, heartfelt performance and Goyo admirably keeps up with him.  As Atom climbs the ranks, you would think that the robot would become some sort of surrogate E.T. or IRON GIANT, but the movie sticks to the rules it sets up.  Is Atom sentient?  Are any of the robots?  The movie wisely doesn't answer that question, and what could have been a simple boy and his pet robot story somehow becomes more poignant.

The boxing matches are excellently done.  Levy knows his action geography and there's never any question what is happening in each fight.  As each fight escalates the stakes, Levy ratchets the tension and makes each fight matter.  Saying this is Levy's best film isn't saying much considering his previous work, but this one feels like a passion project for all the love he puts into it.  REAL STEEL genuinely entertains and excites kids of all ages.  There isn't a cynical bone (or bolt) in its body.  REAL STEEL pulls from those great 80s kids movies but doesn't feel like an homage, like SUPER 8 does at times.  If you have children, they'll really groove on the robot bashing on display, but don't be surprised if you find yourself wiping a tear or two away at the ending yourself.  REAL STEEL's a winner.