Logo by Kristian Horn
What the &#$% is ZOMBIES & SHARKS?
Greetings, all. Ambush Bug here with another AICN HORROR: ZOMBIES & SHARKS column. So I’m not at Fantastic Fest with the rest of the AICN crew, but I have been able to see a few of the more horrific films playing this week. Here’s part one of my two part coverage of some of the frightening gems in need of seeking out. Enjoy! And be sure to come back on Friday for our regular column! 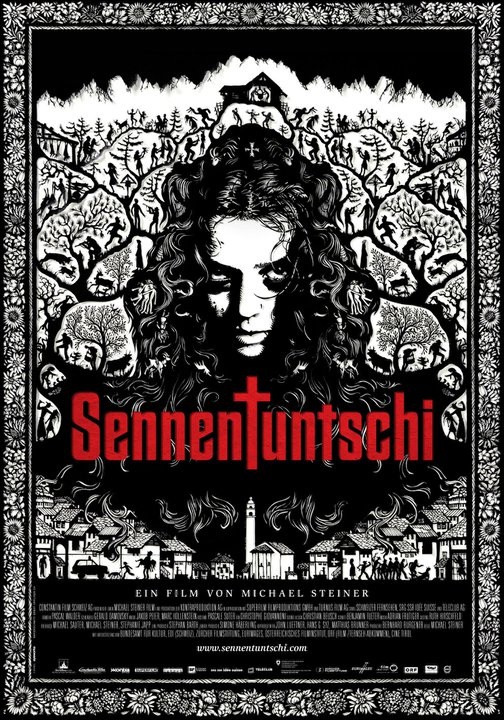 SENNENTUNTSCHI: CURSE OF THE ALPS (2011)

This is an odd little film that shuffles timeframes, locales, and genres in its close to two hour running time. I can’t say I was enthralled by every second of this Swiss German fairytale-like film, but the fact that it’s so scattershot makes the film endearing to me. The ancient fable of Sennentuntschi goes like this: a group of lonely men are looking for the perfect woman, so they make one out of straw, sticks, and old clothes. She comes alive and cooks, cleans, and sexually services the men, then one night she kills them all and makes them into human dolls. Sounds pretty creepy, I know. But the fact that SENNENTUNTCHI doesn’t really know what type of film it wants to be turns out to be its blessing and curse. 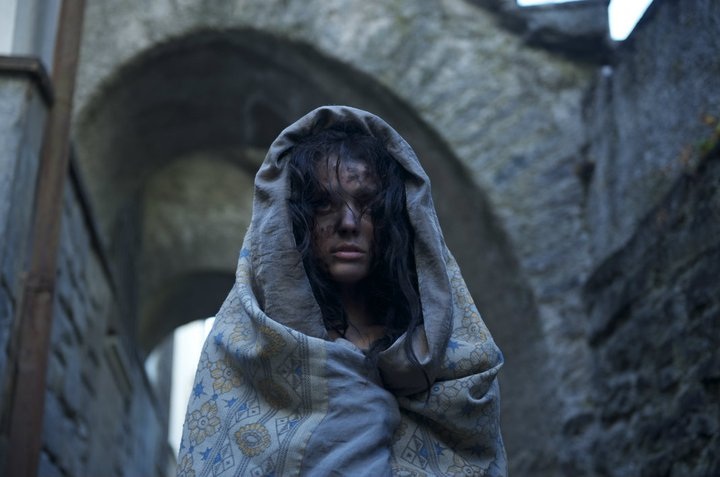 The film starts out like a ghost story, with a boy appearing out of nowhere directing a little girl who has run off from her mother to find a dead body. Once found, the police wonder what happened to the decayed skeleton they’ve found. Cue flashback thirty years to a simpler time where a sheriff finds a hanged priest in the church. Immediately after, a filthy feral girl is found in the street and called a witch. The sheriff protects the girl and ends up having a relationship with her; like ya do when you’re a sheriff and you have a dirty feral girl in your jail cell, right? The girl disappears in the night after the sheriff and her have sex and happens upon three men in a cabin on a mountain. The men tell the story of Sennentuntchi and just as the elder of the three finishes the fable, cue feral girl on their doorstep. 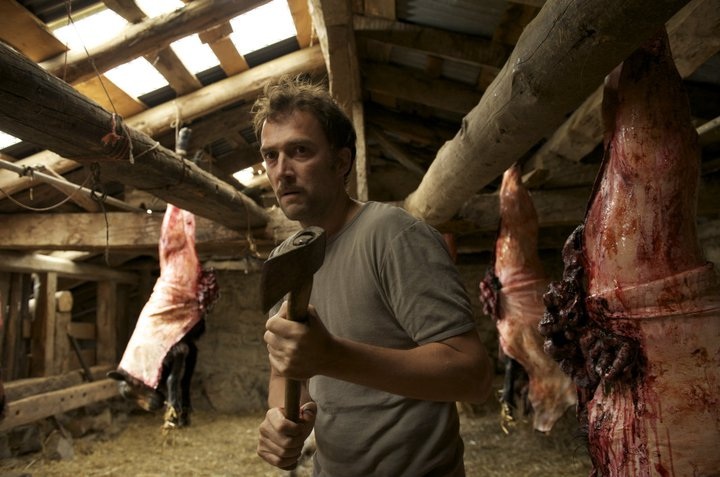 Now, if a sheriff having sex with his prisoner sounds a bit rough and tumble for a fable that started out as if it were along the same tone as THE OTHERS or maybe THE ORPHANAGE rings a bit in-appropo to you, wait until the rape scenes! What starts out like a kids’ cautionary tale proceeds to run more along the lines of I SPIT ON YOUR GRAVE as the three men have their way with the girl and then she…well, you know the fable already.

I don’t want to spoil the ending. I’ve said enough about the film itself. It’s a mish-mash of different genres and films, capably done but somewhat unfocused story-wise. Plus there’s modern Swiss German rock and roll music throughout which makes it all the more weird as some of them are remakes of American songs. SENNENTUNTCHI is an odd little number, I’ll give you that. Good? Debatable. But it’s definitely odd. 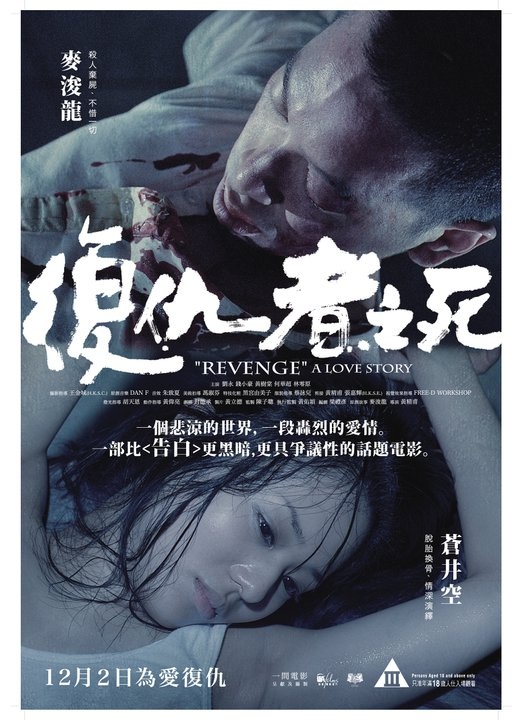 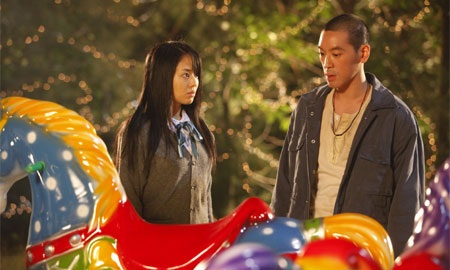 DREAM HOUSE, Wong Ching-Po’s last film, is sitting in my to-watch pile and after seeing REVENGE: A LOVE STORY, that film will definitely move up a few flicks so I can see it sooner. The story is a patient and rather bittersweet romance about a simple chicken bun vendor and a special needs girl who meet and fall in love. Both are outcasts and neither understand or follow society’s rules. Very romantic, yes, but because of this naïveté, things go pear-shaped for the couple very quickly and the title of the film begins to make more sense. 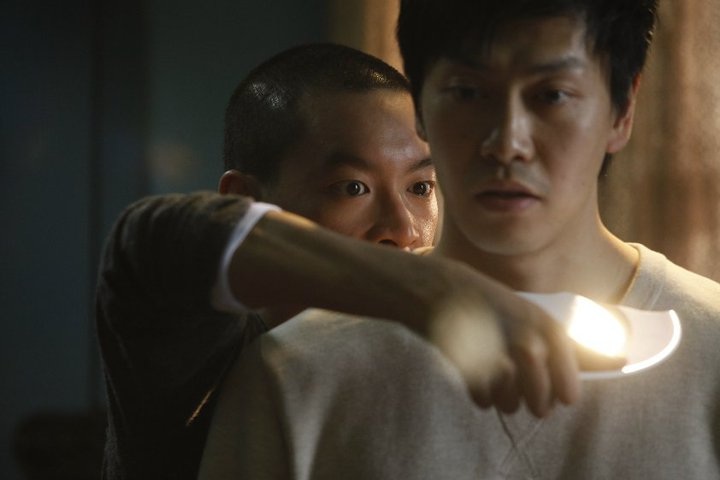 Though this film starts out with an I SAW THE DEVIL vibe as what looks like a serial killer is seen attacking his victims within the first few seconds of REVENGE: A LOVE STORY, it quickly changes into something else. Wong Ching-Po shows a lot of restraint, relying on strong performances by his actors rather than gore and CGI. Only at the end does he churn out the money shots with a careening car, which in itself is pretty well done.

Though this is more of a thriller romance than a straight up horror film, REVENGE: A LOVE STORY deals with more personal nightmares focusing on a couple who, despite all odds, attempt to be with one another. The film never gets overly sweet and has enough thrills along to way to keep those who avoid love stories invested as well. REVENGE: A LOVE STORY will definitely keep you on your toes and you’ll end up rooting for this “serial killer” by the end of the film after this harrowing tale of tragic love. 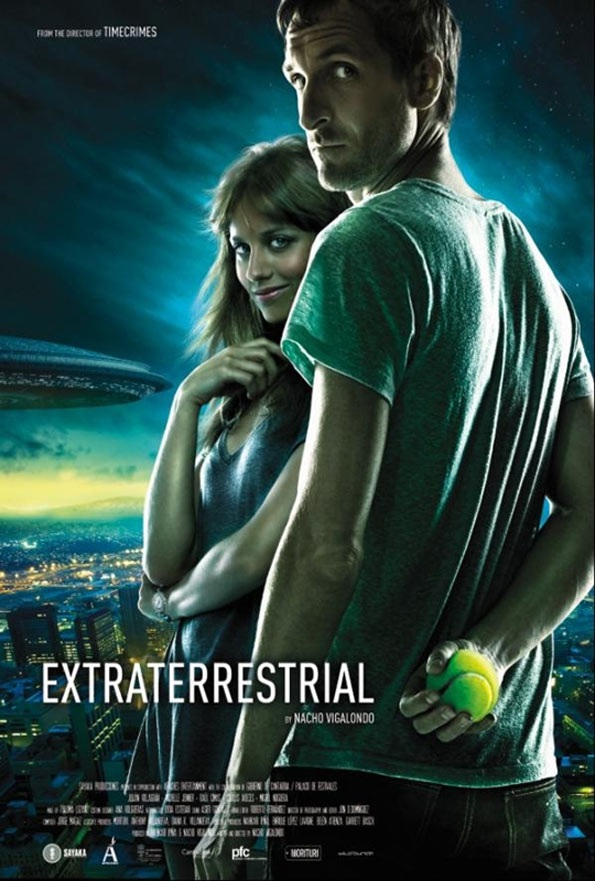 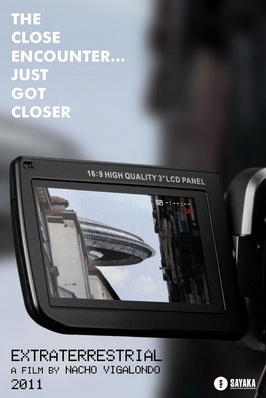 I’ve heard this film as described as a THREE’S COMPANY episode with a spaceship, and it turned out to be just that. EXTRATERRESTRIAL is an endearing little story of a man and woman trapped in an apartment as society crumbles around them when a spaceship appears over their city. Nacho Vigalondo was the twisted mind behind TIME CRIMES, a film I loved. In that film, he made a complex tale about time travel simple and entertaining. In EXTRATERRESTRIAL, he downplays the fantastic and relies on the strong performances by an amazing cast to make one of my favorite films of the year. 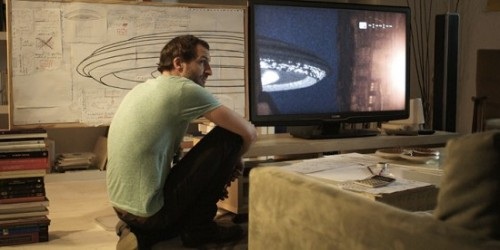 Julio wakes up after hooking up with Julia in her apartment. Both are hung over and it’s pretty evident they don’t know one another. As Julio tries to shed his hangover, Julia tries to shed Julio. Everything is put on hold when they realize there is a giant spaceship hovering over the city. Like SHAUN OF THE DEAD, the film focuses on how even though society falls, it takes a while for everyone to notice. The film is more of a comedy than anything else, showing that Vigalondo not only has good ideas, but the talent to pull them off and a range that spills into other genres besides straight up horror and sci fi.

Carlos Areces, who is quickly becoming one of my favorite actors, once again delivers a memorable performance as the nosy neighbor Angel who is smitten with Julia. Though the role isn’t as emotionally demanding and batshit crazy as his role in THE LAST CIRCUS, it is equally as twisted and well played. EXTRATERRESTRIAL is an entertaining film, due to please all with its goofy hijinks the small cast gets into and the utterly insane situations that are happening to society as a whole. Definitely a film to seek out. 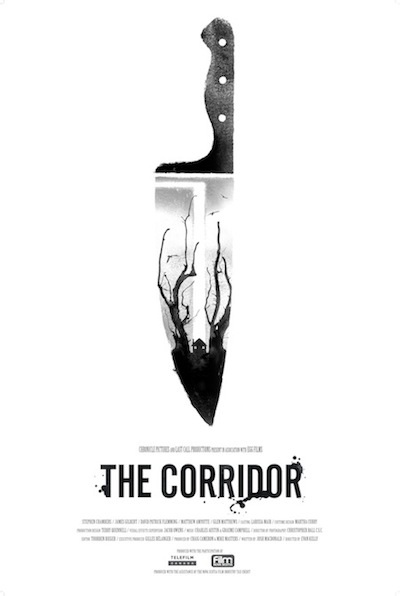 Find out when and where to see this film on THE CORRIDOR website!
Reviewed by Ambush Bug 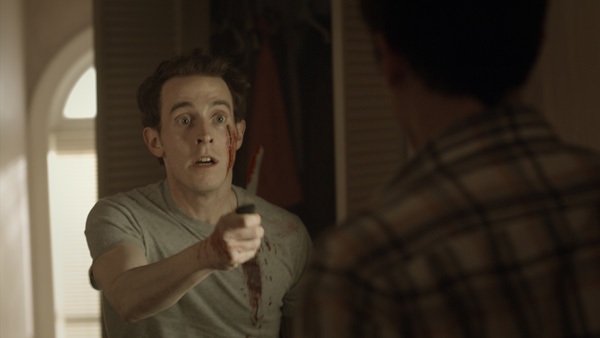 There are a lot of films out there over the last ten years dissecting what it means to be a man in this day and age. From buddy comedies like STEPBROTHERS to dramatic feats of cinema like FIGHT CLUB, modern man has been cast as nothing more than a grown up child—gorging themselves on life’s treasures and throwing tantrums and acting out when life serves up lemons. THE CORRIDOR looks at similar themes as a quintet of college friends get together ten years after one of them has a mental breakdown. For much of the movie, the film focuses on the initial event and the power of the relationships these men share despite the fact that they haven’t seen each other in years. Then for the latter half of the film, the focus is on completely and utterly annihilating those relationships. Though it’s obviously filmed on the budgetary low, it’s this attention to the rise and fall of this relationship between these men that makes THE CORRIDOR one of the most terrifying new films of the year. 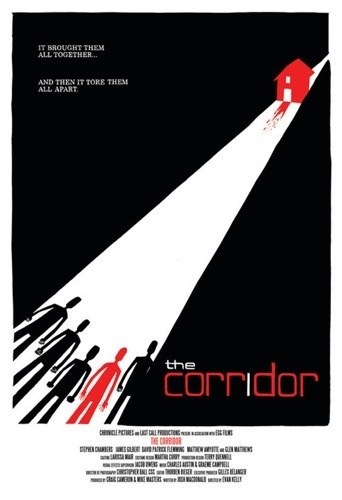 A trip to a cabin in the woods seems like a good idea for these five guys. It’s a chance to shoot the shit, play football, watch football, ride snow mobiles, complain about the wife and kids, and pound brewskis. Director Evan Kelly is patient with tossing out the weirdness right off the bat and instead focuses on the strengths and insecurities of these guys, but not in a way that makes it obvious that these insecurities will be played upon later in the film. And these guys are a pretty likable bunch, making it easy to forget this is a horror film, but when the crew stumble across a strange energy field in the middle of the woods, the viewer is quickly reminded that this is a horror film.

The horrifying last portion of THE CORRIDOR mixes modern pop psychology with the darkest of humor as these men are reduced to monsters tearing each other apart. The film not only scares but makes you think about the fragility and maybe the futility of male relations by showing man at its most animalistic. Not the feel good film of the year, for sure, but THE CORRIDOR definitely is a small indie film that packs a wallop with an ending that is both heartfelt and melancholy all at once.

I’ll have more from Fantastic Fest later this week! 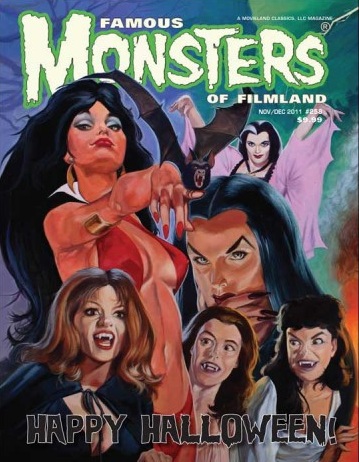