Yes!! CAPTAIN AMERICA: THE FIRST AVENGER Is Unexpectedly Victorious Outside The U.S.!!

We've touched on this previously before (can't locate the exact link at the moment), but...in the months leading up to the release of CAPTAIN AMERICA: THE FIRST AVENGER...some industry folks were concerned that the picture might not perform as well as desired in many regions outside of the U.S.

THIS piece in THR has some interesting perspective on the matter...

Early on, there was a debate within Paramount and Marvel as to whether having Captain America in the title would be off-putting to international distributors, and so the studio offered an alternative title, The First Avenger.

...and reveals that the film actually performed better overseas than it did here in The States!  This isn't necessarily uncommon for a film - but it wasn't particularly expected in the case of CAPTAIN AMERICA.

To date, the superhero tentpole has grossed $178 million internationally, compared to $173.5 million at the domestic box office. The overseas tally includes a strong $5 million opening in China over the Sept. 9-11 weekend.
Be sure to check the article for more insight on the matter.  Personally, I loved the film - very much - it was  one of my top three favorite movies of the Summer (the others being ATTACK THE BLOCK and WINNIE THE POOH).   Sounds like they'll be making another CAP after THE AVENGERS has done its thing - and I can't wait.  Until then, the CA: TFA Blu-Ray hits in a month or two to tide us over, along with this far-beyond-awesome figure from Hot Toys/Sideshow...(click it for more images) 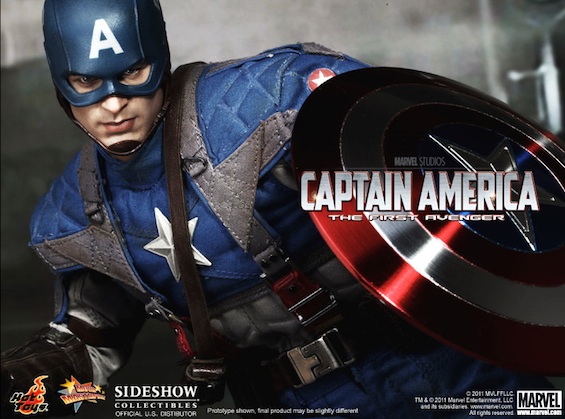