With a bit more detail about the BACK TO THE FUTURE shoe auction.

The shoes DO NOT feature power laces - but they DO light up.  Spectacularly so.

The eBay auction begins at 8:30PM PST tonight (don't forget to adjust for your time zone), and runs through September 18.

The auction site is  HERE - 150 pairs of shoes will be auctioned on eBay over this ten day period, with "all net proceeds going directly to the Michael J. Fox Foundation For Parkinson's Research."

More details about the shoes, and their auction, can be found HERE.

Finally, here's a shot from MJF's appearance on tonight;s LATE SHOW WITH DAVID LETTERMAN.   This is pretty awesome - and puts a lump in my throat, all things considered. 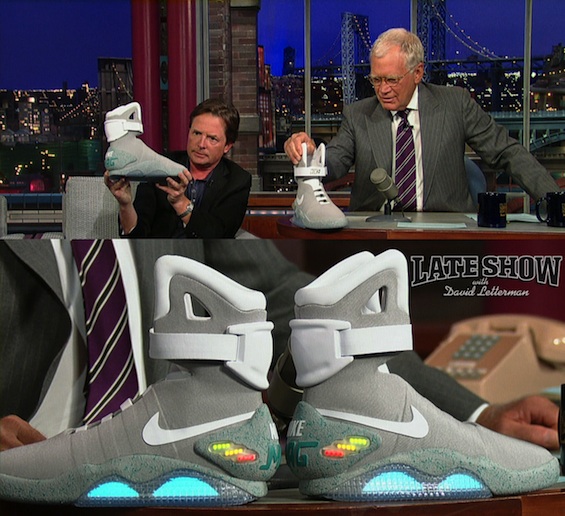 I fully support...so genuinely..Fox's efforts in this cause. Alas, the auction nature of eBay will likely escalate the costs of these shoes beyond most Geek's ability to afford them...almost certainly beyond my own capacity.  But a hearty "rock on!" to those who manage to snag a pair, and more power to Michael J. Fox as well.  Best of luck to all with this way cool undertaking...

Thanks once more to CDarko, by the way...

Seems those badass BACK TO THE FUTURE shoes are being produced in an extremely limited quantity (1500), and being auctioned on eBay to support the Michael J. Fox Foundation For Parkinson's Research.

Details via NiceKicks, HERE.  Thanks to CDarko for the heads up.

Further details as we learn more.

First off, this article will be updated as we hear more.  So check back & stay tuned.

Late last year we learned that Nike had filed for a patent for self-lacing footwear, evidently akin to to the shoes featured in 1989's BACK TO THE FUTURE PART II.

To Geeks like us, the immediate implications of this patent were obvious...Nike should make some self-lacing, lighty-uppy Marty McFly shoes.

However, in the entertainment/product industries, such cross-connects aren't always fully realized - and more often than not don't come about at all.  Thus, the notion of McFly/BTTF2 shoes remained a shameful and frivolous little hope, tucked away in that dark, lonely chamber of our inner-most dorkitude -  where yearnings for things like TARDISes, teleportation devices, easy-to-use jetpacks, and super-sexy-servant-cyborgs remain perpetually unfulfilled.

Well, perhaps it's time to haul our dreams of McFly shoes into the light at long last.  Yesterday on his Twitter stream, BTTF producer Frank Marshall teased that "something big is coming soon,"  then...a few hours later...launched a second tweet calling followers' attention this this video:

THIS article at NiceKicks pointedly reinforces Nike's BACK TO THE FUTURE intentions, offering  pictures of the metal glasses that were included with a private invitation to an event/reveal planned for occur tonight.  Interestingly, and almost certainly not coincidentally, Michael J. Fox is scheduled to appear on David Letterman this evening as well.

All of this via a BTTF.com,  NiceKicks, AICN readers Giacomo and Alexander, and ComingSoon.

Last night, my pre-bedtime conversation with my significant other went pretty-much like this:

ME:  Do you remember BACK TO THE FUTURE II?

HER:  Yeah.  The skateboards.

ME:  Yes.  Do you remember Michael J. Fox's shoes in that movie?

The weight in her voice is palpable.

I show her the video.

ME:  Would you still love me if I wore self-lacing BACK TO THE FUTURE shoes that lit-up?

HER:  You could wear them to bed and we could fuck like bunnies.

ME:  OK, so what about wearing them elsewhere?

As unconvincing as anyone could possibly be.  In a detached, snarky church-lady sorta way...

HER: Of course. That would be fine.

At that point I figured it might be best to let her sleep on it for a while, and try again when we woke up this morning.  Certainly, some rest and a nice breakfast would clear her head and re-ignite her undoubtedly fond memories of BACK TO THE FUTURE II and its lighty-uppy self-lacing shoes.

At breakfast, I tried again...

ME: So about those shoes...would you still love me if I wore them?

HER: We talked about that already.

And that was it.  Nothing else.

The woman, or the self-lacing, lighty-uppy BACK TO THE FUTURE Marty McFly shoes?

'Tis a difficult choice to be sure, but in the end the choice is really quite simple and obvious, albeit painful.  And, after all, whatever happens is my density.  As soon as the shoes become available for pre-order, I'll update this piece with more information - dutifully telling AICN readers how, and where, and when these amazing  shoes can be found so that everyone can get their orders in as quickly as possible.

But only after I've procured a pair for myself.