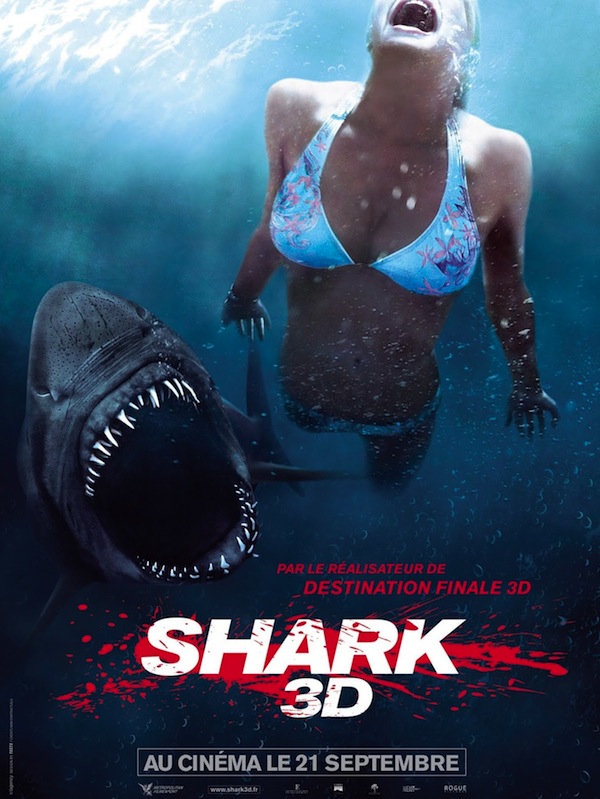 Ahoy, squirts! Quint here. Like a great many of you when I found out Shark Night 3D was in fact a PG-13 movie my interest in what should have been a fun, over-the-top gorefest went from high to low in the blink of an eye.

In fact, I almost decided against seeing the movie despite my seemingly built-in curiosity about any and all Jaws rip-off movies, but I was convinced by a group of friends to go catch the movie at its midnight showing.

Twenty minutes in and I was regretting this decision. Immensely. Flat dialogue spewed out by models instead of actors, cookie-cutter characters (you could tell that the one hot dude was a book nerd because he wore glasses) and a slight undercurrent of racism (the one black dude is friends with the nerdy white guy because he needs to keep his GPA up in order not to lose his sports scholarship) met my ears and a half-assed attempt at recreating the opening to Jaws met my eyes.

The guy below is the nerd, by the way. You can tell he’s now the hero because he’s not wearing glasses and took his shirt off. 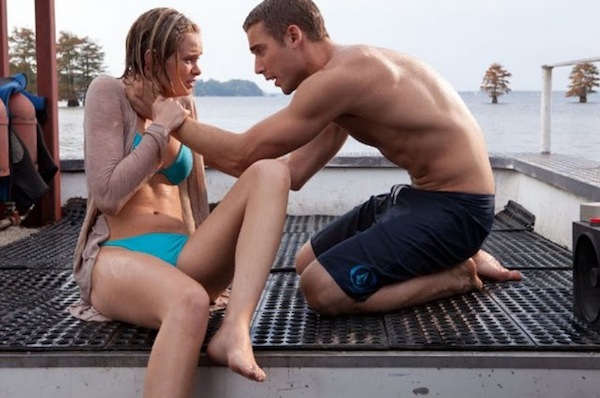 Honestly, I kind of wanted out, but I also wanted to stick around and see if the fun would start kicking in with all the shark stuff. The fun started, alright, but it wasn’t the sharks that brought it… it was the crazy character work on top of the out-of-their-minds over the top ridiculousness of the later two thirds of the movie that made the rest of the movie worth it.

I could go into these moments in detail, but I won’t. It’s not that I’m overly concerned about spoiling these beats, really… it’s that I’m fairly confident you wouldn’t believe me if I accurately described some of the shit I saw. Especially the post credits sequence, which there really are no words for. But yes, you will kick yourself if you miss it, so stick around. You won't regret it.

A part of me wants to give full credit to the high entertainment factor to the creative team behind Shark Night 3D… it’s clear they all had a lot of fun making this movie… but the truth is this is kind of a shitty movie. If director David R. Ellis and writers Will Hayes and Jesse Studenberg can be given any credit it’s that they knew they had a stupid movie on their hands and they decided to embrace it instead of fight against it.

Even my uber-critical self will admit that they do some smart things with audience anticipation of certain genre tropes (especially when it comes to the dog in the flick), however on the whole even those doesn’t feel like their original intention to me, but something they rolled with as they realized they couldn’t show T&A or heavy gore.

Listen, the movie is heavily miscast with the exception of Sara Paxton as the adorable being of innocence in a tight bikini and Joshua Leonard as Red, the hillbilly with crazy cannibals teeth, filed to points. Everybody else in the movie is a stereotype of a stereotype of typical Hollywood horror casting.

I guess there wouldn’t be very much of a movie without a human threat since they didn’t go so far as to make these sharks able to walk on land (maybe they’re saving that for the sequel Shark Night 2: Rise of the Landsharks!), but they scary rednecks aren’t all that scary when they’re lead by one of the main characters from The O.C. Leonard, on the other hand, looks like a real person and gives his character so much flair that you’re onboard for the really stupid, stupid shit they do (and have to explain).

Sara Paxton has the right look… hot, but in a girl-next-door kind of way. Her performance here isn’t very strong, but that’s not her fault. As written, her character makes about as much sense as a dragon singing Zip-A-Dee-Doo-Dah to Betty White in a greasy diner (now where the hell’s THAT movie?!?) with an incredibly elaborate and exaggerated backstory exposition she has to spit out and little else for her to do except scream for her friends to get out of the water as they’re systematically eaten by various species of sharks. 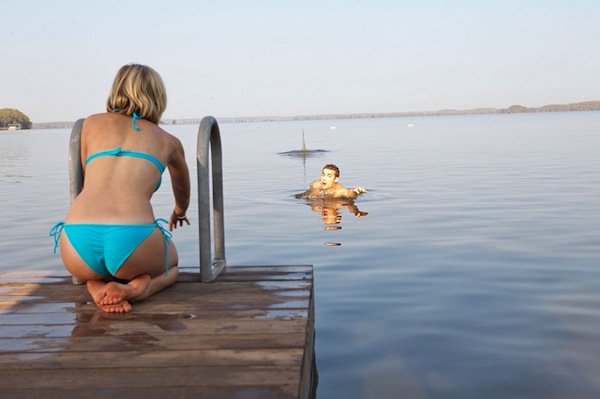 I heavily urge you all to check out Ti West’s The Innkeepers, which also stars Paxton, to see just how wasted she is in this movie. Her character in The Innkeepers is nuanced, grounded, sweet and feisty all within a spooky little haunted hotel flick.

No such luck here, but on the creepy old man side of things she does spend half the movie wearing almost nothing. In fact, all the girls do. There’s even a scene of high drama as two girls get into a bit of a fight (again, a stupidly written awkward moment of drama) which would be unbearable if it wasn’t so funny that they were being all tough and serious while wearing the skimpiest bikinis you could imagine.

My buddy JC De Leon made a very accurate comment that I can not top, so I will quote him directly. “Shark Night 3D is both as good as I hoped it would be and as bad as I feared it would be.” That about sums up the movie for me, too.

However it’s hard to deny that the movie gets incredibly fun in much the same way that Alexandre Aja’s Piranha did. This one isn’t as consistent as Piranha was, at times coming off like one of those post-Scream pieces of pretty-people-getting-killed PG-13 shit, but when they decide to turn the Weirdness up to 11 the movie gets really, really entertaining. There’s a particular moment of a character taking a stand that makes fuck all sense, but I’ll be damned if I didn’t feel like standing up an applauding at the sheer lunacy of it.

The movie’s stupid. You already know that. Look at the poster! But the success of the film is that it maintains a high entertainment value with a sub-par script, underwear models instead of actors and sharks that look like a step above the Jaws hologram from Back to the Future II. Sometimes these movies just get drab and dull in their horribleness, but this one embraces the cheesiness and milks it for all it is worth.