Greetings, folks. Ambush Bug here with another interview I conducted at the San Diego Comic Con. Special thanks to AICN’s unsung hero, Muldoon, for transcribing all of these back and forthings. Expect a ton of interviews to be released daily until my interview well is dry (and believe me, it’s going to be a while after this con). I love me some PRISON PIT. If you havn’t checked out this amazingly graphic comic book series, you don’t know what kick-ass really is yet. BOOK THREE of the series made its debut at SDCC this year from Fantagraphics Books and I was able to talk with writer/artist Johnny Ryan. Though mild-mannered in appearance, Johnny Ryan is a madman on the page. Here’s what Ryan had to say about the madness that is PRISON PIT!!! 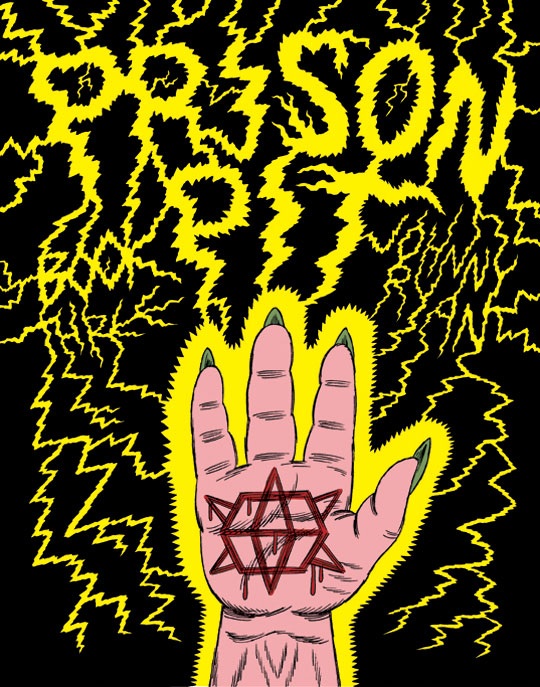 AMBUSH BUG (BUG): So I’m here with Johnny Ryan from Fantagraphics Books and you have a very interesting book, do you want to tell us about it?

JOHNNY RYAN (JR): It’s called PRISON PIT and it’s about big muscle monster men beating the shit out of each other.

JR: That’s usually how I describe it to people.

BUG: I’ve reviewed the first two books and they have been by far the most creative and most visually interesting and most depraved books that I have seen in quite a long time. You seem like…you are not who I was thinking of seeing when I was told I was going to be meeting the writer. Do you get that a lot?

BUG: So what’s the inspiration for PRISON PIT?

JR: Well it was a combination of things. It was a lot of the books that I was reading and movies I was watching. I was reading a lot of manga, like BERSERK and DRIFTING CLASSROOM and then there were even some American comics like POWER MASTERS and Benjamin Marra’s NIGHT BUSINESS. That was one of the main things, seeing artists that are not superhero artists, they’re not like traditional superhero artists, they are more alternative artists, but they were taking on my genre type stuff like fantasy and they weren’t being ironic about it either, they were just kind of like just straight up doing it. I was like “I kind of want to try to do that too, but put my own spin on it.” Yeah, and then I’m also a big fan of horror movies and I liked wrestling a lot when I was a kid and I wanted to sort of incorporate all of those elements too. 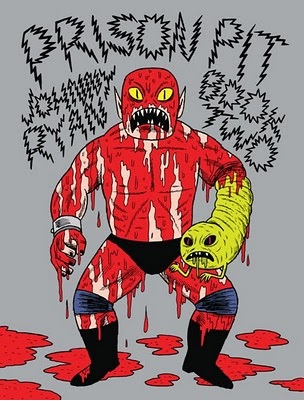 BUG: The book itself, what impresses me the most is that issue #1 ends and it goes right into issue #2 and issue #2 just picks up right where issue #1 left off. Am I remembering that correctly?

BUG: And what I saw from issue #3 is it’s the exact same thing, so is this going to be a continuing serial or is this a trilogy? What is this for you?

JR: No, no, it’s still going. Right now I don’t have a resolution in mind for this story. I mean the thought of that would be depressing to me to know, because it takes me like a year to do one of these books, so to know like three or four years in advance how the book would end would be sort of a downer for me and when I work, it’s sort of a combination where I do have certain ideas that I want to hit, but I also like to be a little spontaneous too, so I’m never really sure what I’m going to come up with. Sometimes I’ll even have an idea and then when I get to the point of using the idea, I’m like “this idea isn’t fucked up enough. I’ve got to fuck it up a bit more.” (laughs) “I’ve got to increase the fucked uppedness about it. So six books seems to be the goal, but depending on how I feel at that point I might continue.

BUG: Okay, and is there a line that you don’t think you’re going to be able to cross in this book or is this just…

JR: What do you mean? 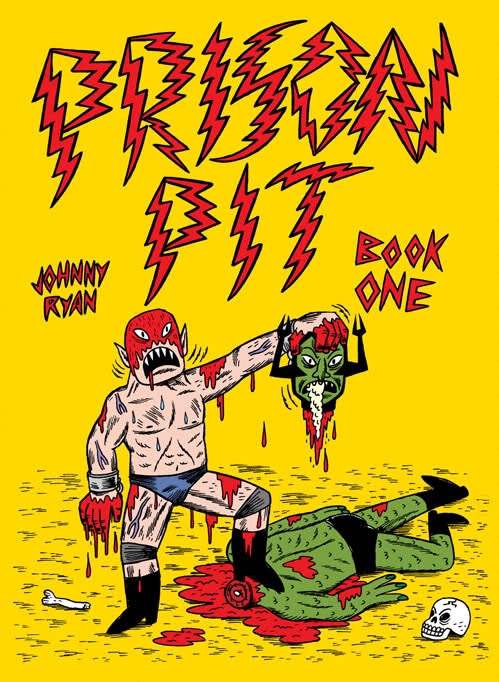 BUG: Is there something that you wouldn’t do?

JR: I think it’s a mistake to put those kinds of restrictions on yourself, even with my previous stuff ANGRY WITH COMICS, you know, people would ask me “are there jokes that you wont tell?” or “is there nothing that you wont make fun of?” Even if there is something, like, I don’t even know, I try to find those things that people think shouldn’t be made fun of or dealt with in any way, those are the most exciting things for me to do. That’s what makes this whole thing worthwhile is crossing lines and pissing people off, making people sick and really hating me.

BUG: Yeah, what have been the reactions from people? Anything stand out?

JR: Nothing beyond like you see people online making comments about how much they hate me and despise me and how awful I am, but I’ve never been like personally approached and told that.

BUG: I was shown some of the pages from ANGRY COMICS that Fantagraphics is going to me reprinting and then I see your style on PRISON PIT. They seem to be vastly different from each other. Can you tell me a little bit about the different takes you took on both of those projects? 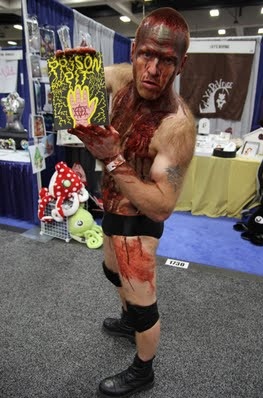 JR: Sure, although it was kind of a conscious thing that I did that when I started PRISON PIT, I wanted to not only change the tone of what I was doing, because the thing about ANGRY WITH COMICS was that it was constant. I felt like I had to shove as much jokes and bullshit, as much as I could into every single panel, so as a reader you are constantly being punched in the face. With PRISON PIT, because it’s a longer form, I was able to kind of take my time with it and I didn’t feel like I had to constantly shove stuff down your throat. I also thought that I was going to change…ANGRY COMICS I used primarily a brush and I wanted to mix it up a bit and just primarily use a pen, so as to get that scratchy sort of look and make it kind of look like I was a 14 year old boy drawing this in my high school notebook.

BUG: Yeah, I reference that quite a bit every time I review the book. It just reminds me of the stuff you would see on the back of a Trapper Keeper or something like that in high school.

JR: I kind of wanted to capture that, like, you know if you were just looking in some attic or something and you found like “what is this weird notebook? Some kid from 1975 wrote this weird outer space prison story…” So I was trying to capture that feeling of it too, because I mean I don’t have those kinds of traditional super hero drawing skills. I feel like I do draw like I’m a 14 year old boy, so I feel like I would want to capture that essence of some teenage metalhead drawing a space comic.

JR: I’ve taken some art classes and stuff, but primarily self taught. I sort of found that when I was…when I was in college I took some art classes, but then when I got out of college and I started to look at comics as something that I wanted to do for a living I kind of felt like all of the art classes I took didn’t really help me at all and I just sort of had to start from scratch.

BUG: I just wanted to comment on just the progression from one panel to the next, it really is patient, but it seems like it’s very well planned out. You may go through a stream of consciousness as a way the story is going to go, but just the idea of movement in your stories, it’s really meticulous in the way that events play out. Has anyone ever talked to you about that? What are your thoughts on that?

JR: That goes back to what I was talking about, because I’m working with a longer form I’m not having to cram as much shit into 24 or 28 page comic book. I’m able to kind of take my time with it and go sort of at a more deliberate pace, an easy pace of letting the story unfold and I don’t really feel the need to constantly be kicking the audience in the teeth every second and it also I think makes the explosive violence more exciting if there’s moments of some downtime and then back up and then down.

BUG: So I haven’t read the third one yet, what am I in for once I crack that one open?

BUG: Nice. So is there anything else that you would like to tell Ain’t It Cool?

BUG: (laughs) That’s great. Well, thanks a lot for taking the time to talk with me. It’s a great book. I can’t wait to read the third volume, so thanks again.

JR: Thanks for interviewing me.

PRISON PIT BOOK THREE is now available through Fantagraphics Books as are the first two volumes of the series. I recommend you check it out for a gory good time!

Ambush Bug is Mark L. Miller, original @$$Hole / wordslinger / reviewer / co-editor of AICN Comics for over nine years. Mark is also a regular writer for FAMOUS MONSTERS OF FILMLAND and will be releasing FAMOUS MONSTERS first ever comic book miniseries LUNA in October (co-written by Martin Fisher with art by Tim Rees) Order Code: AUG111067! Support a Bug by checking out his comics (click on the covers to purchase)!