Greetings, folks. Ambush Bug here with the second in a ton of interviews I conducted at the San Diego Comic Con. Special thanks to AICN’s unsung hero, Muldoon, for transcribing all of these back and forthings. Expect a ton of interviews to be released daily until my interview well is dry (and believe me, it’s going to be a while after this con). I had a chance to catch up with two of the three men of the hour when it came to comics at this con: Dan Didio and Jim Lee. With DC’s New 52 looming just a few weeks away, Lee and Didio were working overtime to let everyone know that DC is making a major move to be the new top dogs in comics this year. I had a chance to sit with Jim and Dan in the DC Green Room which looked over the con floor--a view few outside of the DC elite got to see. Here’s what Dan and Jim had to say. 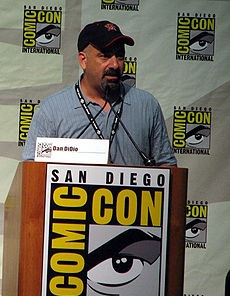 AMBUSH BUG (BUG): I’m sitting here in the DC green room. We can see the entire floor from here and I’m here with Dan Didio and Jim Lee. How the con going for you guys so far? It’s Saturday, day three or two and a half…I think.

DAN DIDIO (DD): I’m in the groove man. I’m locked and loaded. No, this is the biggest day of the con and the days leading up to this were the warm up, so at this point we are a well oiled machine.

JIM LEE (JL): (Laughs) And we’ve said everything about ten times before.