Quint chats with Andrew Garfield about the responsibilities of being Spider-Man!

Ahoy, squirts! Quint here. Before the Sony panel at Comic-Con (and before I saw any of the new footage from The Amazing Spider-Man) I had a chance to sit down with the new Peter Parker, Mr. Andrew Garfield.

I’ve been a fan of his work in cinema for a few years, stemming back to Boy A, and was genuinely excited when Sony announced him as the new Spider-Man. If they were going to reboot the series they couldn’t ask for a better Peter Parker. Skinny and awkward? Check! Great actor? Check!

It also helps that for most theater-goers he’s a new face, someone they can accept as Peter Parker and not an actor playing Peter Parker. Outside of a great supporting turn in The Social Network he’s all but unknown to American audiences.

I was one of the lucky few to get 1:1 time with Mr. Garfield and he struck me as a very humble, sweet guy whose enthusiasm for Spider-Man was genuine and not just fanboy lip service.

Hell, he was even wearing the colors! Enjoy the interview! 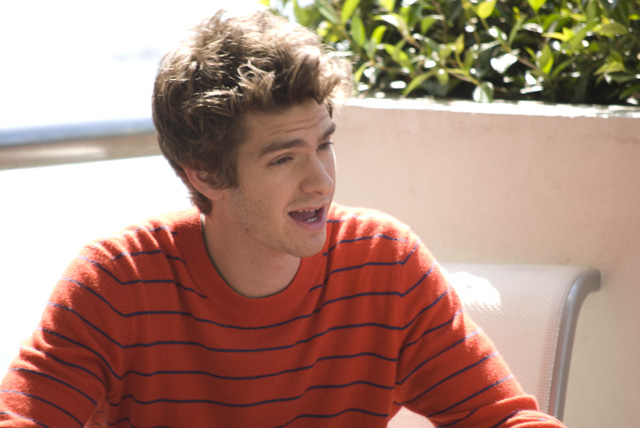 Quint: Hey, man. I have to start by saying that I’ve been a fan of your work for a while now, going back to Boy A and the Red Riding Trilogy. When they announced you as Peter Parker I thought it was perfect casting.

Andrew Garfield: Oh, really? Dude, that’s so nice of you. Thank you!

Quint: I can’t wait to see what the footage is looking like. I grew up with the Spider-Man comics, I’m a giant fan. I see you’re sporting the colors.

Andrew Garfield: (laughs) Yeah, I try to do my best!

Quint: I guess the big question, the elephant in the room, is how you develop your own interpretation of Peter Parker as a character and of Spider-Man as a character. I mean, you not only have the established movie universe, but decades of different iterations of the character in comic book form.

Andrew Garfield: I know. And people are still crazy about it.

Quint: And to complicate it a lot of people are into the books today because of the Spider-Man movies and Tobey Maguire’s performance.

Andrew Garfield: Yeah, I know. It rekindled my love for it. I was reminded about how much the comics and the cartoon series meant to me as a kid when I saw the film. When I saw that first movie, I thought “God! That symbol has meant so much to me for all my life, since I was two years old and I had my first Halloween.”

But, yeah. Stepping into this is a number of things, you know? It’s a dream come true, for sure. I feel really lucky to have been given the opportunity. I wanted to make sure I had as much fun as possible because what I’ve found is that Peter Parker doesn’t get to have that much fun. He’s got a lot to do, he’s got a lot of stuff to clean up.

Quint: Especially, I’d imagine, in the first movie of a new series of Spider-Man films.

Andrew Garfield: Yeah. He’s going through adolescence, which is a full time job, as we all know and have been through; that breaks you down and makes you sometimes question existence. And on top of that he gets given these powers, which on the surface to us all just seem like this ability to be stronger than you’ve always been, to be able to swing through the streets of New York City and get to experience the sensation of flight, which we’ve all dreamed about.

Quint: That’s one of the things I’ve always found fascinating about Peter Parker as a character, that no matter how shitty his life can get…

Andrew Garfield: Yeah, he always has that.

Quint: That’s something I love in the books that wasn’t in the Raimi movies too much… the wise-cracking Spider-Man. When he’s Peter Parker he has the weight of real life on his shoulders, but he has a certain freedom as Spider-Man… 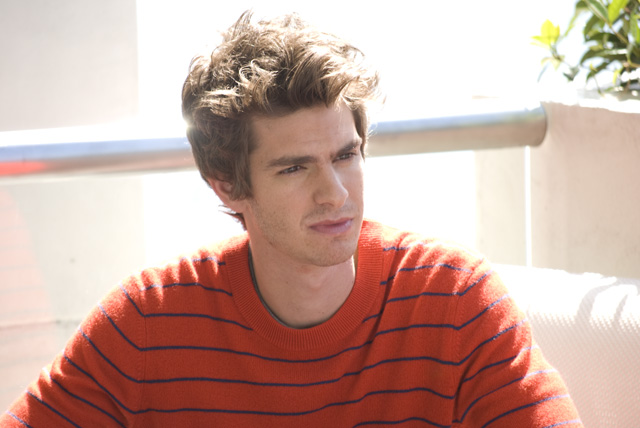 Andrew Garfield: Sure, in a way. But if I could disagree with that as well… the mask weighs more than I thought it would… for me, personally.

Quint: Sure, it represents the responsibility that comes with his powers…

And as soon as we started working (laughs)… It was a lot. It was just a lot. I realized just how much responsibility I was taking on for you, for your buddies, for everyone who’s going to be in Hall H today and for me, the 7 year old inside of me. It’s a lot of pressure, but it’s the same kind of pressure Peter Parker feels. He feels the weight of the city on his shoulders. He knows he’s the only one with the power that’s able to really fully protect these people. He feels like he’s their father, ultimately.

Quint: Which is interesting since he loses both his father and father figure.

Andrew Garfield: It’s a wonderful thing that you bring up. I love that and that’s what attracted me about this particular incarnation of this particular telling of this myth, this idea of what happens to someone when they’re orphaned. When they’re abandoned. When they’re left. I find that so powerful and profound. What Peter finds, to fill that void… he has empathy. He has empathy for the underdog, he has empathy for the abandoned. Because he has that empathy and that understanding he wants to protect people from feeling the feelings he’s felt all his life.

There’s something so beautiful about that, that he doesn’t want anyone to go through what he went through. The responsibilities that he assumes… it’s a brave thing to take on. Power corrupts and absolute power corrupts absolutely and he’s a kid and he gets given all this power, but his heart and his center and his moral core is so… he’s been through it, he knows what pain is.

Him being the underdog, him being the skinny kid that gets picked on, him having a sense of injustice makes him the hero that he is. All of his weaknesses are his strengths and I love that.

Quint: But with all that, do you still find time in your version of Parker to be the smart-ass?

Andrew Garfield: Every opportunity I got. I was like, “We need to see this guy enjoying this. We need to see him enjoying it as much as humanly possible.”

Quint: That’s a huge part of Spider-Man as a character, so I’m very happy to hear that. Another thing I love is bringing back the mechanical webshooters. I always found that in the book the mechanical webshooters were great because it gave him a weakness… he can run out of webbing, they could get damaged, etc. It forced Spider-Man to adapt on the fly.

Andrew Garfield: Right. You need that. That was something that was really exciting to us all as well. As you were saying, this story has been told so many times because we want to hear it because the themes are beautiful and the themes are important and it’s fun watching a guy swing through New York City. We all want that! 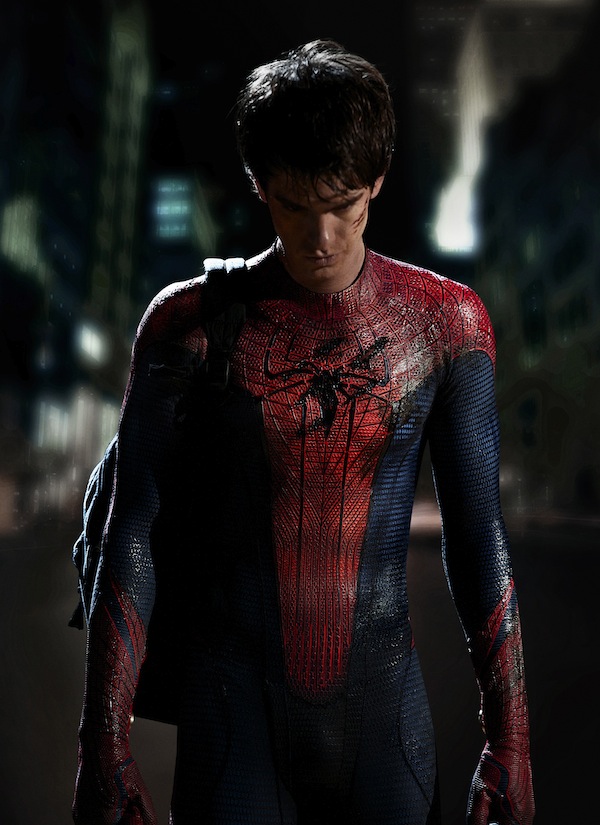 It was after this interview that I saw the footage (as reported here) that showed me exactly the Peter Parker/Spider-Man Mr. Garfield was talking about above, wise-cracker and all.

In person Garfield gave me the impression of a guy that really gave a shit about the character he was playing, not just on a surface professional level, but having a deeper feeling of responsibility to get it right. The footage shown at Comic-Con certainly supports that. No matter what happens with the rest of the movie, I’d wager every one of you will love Garfield in the role.