Quint has seen Rise of the Planet of the Apes!

Ahoy, squirts! Quint here. One of the many, many perks of being downunder for a few weeks is that Rise of the Planet of the Apes is already in release here. I saw it opening night at The Roxy, which is a new art deco inspired theater in Miramar, a stone’s throw from Weta Digital, actually. As such, I got to witness a ton of employees watching the movie.

They weren’t raucous, but when the end credits were rolling (spoiler, the movie ends!) there was no applause for the actors, director or producers, but when the Weta Digital credits rolled by there was much clapping and pointing around me. It was a neat cherry on the top of an overall pleasant viewing experience. 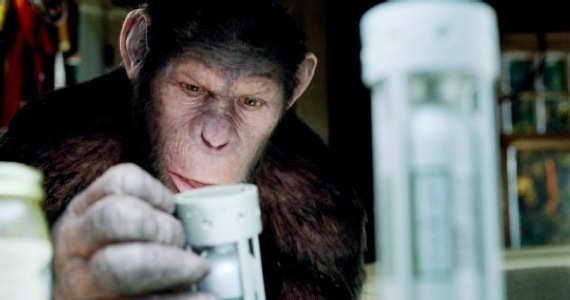 The real success of Rise of the Planet of the Apes is in Caesar’s story. If you’re not familiar at all with Ape lore, Caesar is the primate who first spoke and began the ape revolution. In the original series his origin is… inconsistent. The story of how he revolts changes from movie to movie until we actually see it in the fourth film, Conquest of the Planet of the Apes.

It’s quite different in this new prequel and, in many respects, better. Instead of a virus wiping out dogs and cats making apes the new domestic animals (and Caesar being born of time traveling apes from Escape from the Planet of the Apes) the filmmakers focus on the horrible real world moral dilemma of animal testing as the triggering factor.

Since the original series couldn’t keep the story straight, I found I didn’t have any difficulty accepting this new take on the origin of Caesar, especially since it was told so well.

Andy Serkis does what he does best, effortlessly transferring his real life acting talent to a digital representation. He’s a great character actor and I’d love to see him appear as his human form in more movies, but I gotta admit I’d be fine seeing him spend the rest of his career being the missing link between Ray Harryhausen and today’s digital creatures. He can breathe life into modern cinema’s creatures like no other.

The human story is important, but only as a plot-propeller. The meat and potatoes of this movie rests in Caesar’s story. He’s the one you empathize with, he’s the one with a real character arc and, because he doesn’t have the same ability to speak as his human counterparts, director Rupert Wyatt is forced to use pure cinema to tell his story. Caesar’s emotions are told through his eyes, his body language and his actions speak for him instead of words.

If they could have told the human story with that kind of creativity this would be a damn near perfect movie. James Franco is obsessed with find a cure to Alzheimer’s, a disease, which has hit close to home as his brilliant father (John Lithgow) deteriorates day by day. Testing his drug on primates produces Caesar and, ultimately, begins the revolution of the apes.

Lithgow and Franco are both solid in the movie, but almost every other character is either a two-dimensional caricature spouting nothing but exposition or a place holder. Brian Cox, playing the head of a primate sanctuary (which is unsurprisingly not so pleasant a place), is able to inject some nuance, humor and emotion into what could be a one-note baddie. His mean son, played by Harry Potter’s Tom Felton, doesn’t come off so well. Felton is good at being a dickhead, but he’s an archetype, not a character.

Poor Freida Pinto has the job of standing around looking beautifully concerned as vet/Franco’s girlfriend, but there’s still someone in the movie who gets the even shorter end of the stick: David Oyelowo. This guy… I want to give him the benefit of the doubt because the dialogue he’s forced to spit out as the big boss of the lab where Franco works is the worst kind of character-void exposition. “I am this way because of this and I like money and you can’t do this because of this. Did I mention I like money?” Sure, he’s a guy you’re looking forward to seeing get his comeuppance, but I was hoping for just a little bit of humanity in there… or a little more cruelty… something to give him an identity other than money-loving suit.

I will give a ton of credit to John Lithgow, who has always been one of my favorite screen presences, for bringing real pain and sadness to his portrayal of a man being devastated by Alzheimer’s. It could have easily been a comic performance or heavily melodramatic, but he hits the perfect notes even if he disappears for huge chunks of the movie.

If any of these people were the real focus of the movie then I wouldn’t have liked it much, but thankfully it is not their story. They are all there to support Caesar’s delicately told arc which takes him on a journey of love, betrayal, anger and discovery. 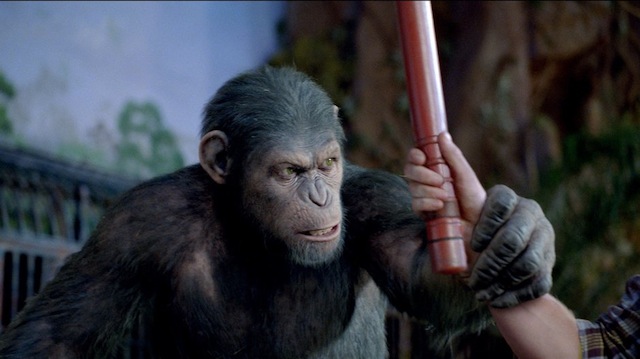 Weta’s work in here ranges from “best CG I’ve ever seen” to what appears to be some half-finished rough shots, especially in the baby and toddler Caesar effects. The nitpicker in me noticed some weightless swinging shots and some cloth effects that looked unrealistic, but as hard as I am on CG the real important quality is in the performance. That was Ray Harryhausen’s great secret. He brought a personality to each of his creatures that makes them timeless no matter how they were achieved.

It’s not just Caesar who is executed well here, but a whole range of apes all with their own unique personality. There’s the old Alpha Male who gives Caesar hell at first and is forced into subservience as Caesar finds his calling, the caged muscle (a tortured, pissed off gorilla which is very much a throwback to the roles of the different primates in the original series), an intelligent circus orangutan that can sign and connects with Caesar on a level the other apes can’t and a mean, half-blind scarred-up old veteran of the lab testing scene.

Every scene involving the apes is gold, most scenes involving the humans not so much, but what works works so well that misses fall by the side of the road.

Fans of the original will get a few nods, some careful and some eye-rolling (did we really need to have both “It’s a Madhouse! A Madhouse!” and “Get your stinking paws off me you damn dirty ape!” repeated for us?), but if you’ve never seen an Apes movie this one will play just fine.

So, an overall successful film, with some great character work brought to the Apes, some mostly brilliant effects to bring them to life and a really great finale that makes you root for the apes and the downfall of the bastard humans. In fact, this would make the best follow-up on a double bill with Project Nim ever. By the end of Project Nim you’re ready to eradicate human beings as a species in favor of the primates of the world. Rise of the Planet of the Apes works as escapism and good storytelling. It's a tentpole with something on its mind other than just fan service.