Copernicus Tells Us About This Week's KNOWN UNIVERSE (Nat Geo Channel)!! Andy And Sigrid With Guns!! Sigrid With A Flamethrower!! Death By Black Hole!! And More!!

Sadly, here we are at the last episode of KNOWN UNIVERSE for the third season.  Appropriately, the title of this one is THE END OF THE WORLD.  The subject is the deaths of things in the universe, and it is one of my favorite episodes.

BLOWING UP A BUILDING

We start with a bang, by blowing up a building! What does that have to do with the destruction of astrophysical objects?  Well, the reason most stars stay the same size is that they are in a state of balance.  Gravity is relentlessly trying to crush them down, but the pressure of all that hot gas, fueled by nuclear fusion, is holding them up.  Stop the fusion, and the star, if it is big enough, can collapse and explode as a supernova.  A building is similar – pillars and beams are propping it up against gravity.  But weaken the structure with explosions, and it comes crashing down.  David Kaplan was on-hand to inspect the explosive charges wrapped around some building pillars, then watch as they are set off and the destruction unfolds.  Here is the aftermath: 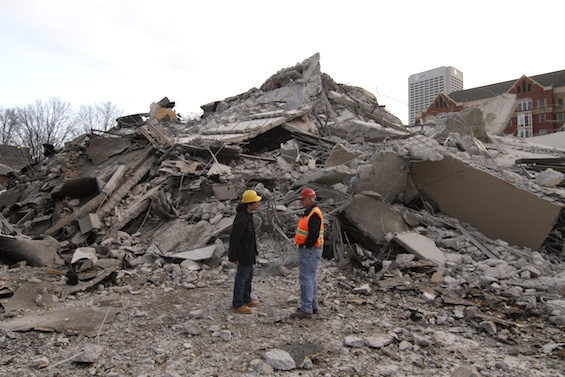 Every day meteors are entering the Earth’s atmosphere.  Only a small fraction survive to become meteorites – most burn up completely.  The same is true for space junk.  To show this in action, Mike Massimino takes us to a lab at Johnson Space Center where they test materials for use on the Space Shuttle to help it survive reentry.  He puts a bolt in the test chamber and subjects it to the kinds of temperatures it will experience when falling through the Earth’s atmosphere.

SAY HELLO TO MY LITTLE FRIEND

The theme of this episode is that even things that seem permanent must die at some point in the universe.  This is even true for planetary magnetic fields.  On Earth, our magnetic field is shielding us from radiation.  But Mars appears to have had a strong magnetic field in the past, but lost it at some point.  To illustrate the difference, we represent the radiation we’d receive on each planet as bullets.  To start with, I take a gun and fire a single bullet into the target.  (Geek note, the gun I used was the actual gun from the movie SAW!)  That represents the radiation dose we get on Earth in a year.  Then, to show the radiation dose we’d get on Mars, we bust out the machine guns!  Sigrid Close and I got to shoot real, vintage Tommy Guns, aka the Chicago Piano, Chicago Typewriter, Trench Broom!

These things are no joke.  You really have to learn how to handle them.  As you shoot, they really ride up.  So you have to lean in and put a little muscle into controlling the gun.  Also, you can’t stand exactly side-by-side.  We had to stand staggered so I didn’t get hit in the face by the hot shells flying out of Sigrid’s gun. 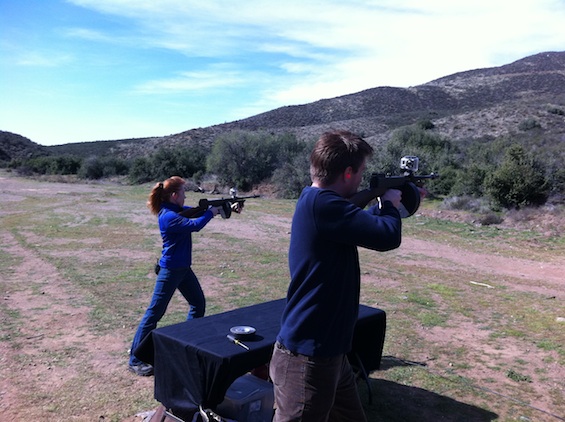 Those drum clips don’t hold that many bullets, so we had to reload several times.  Towards the end, we mounted cameras on the guns so you could see our faces while we were shooting.  Below you can see the target – we put 500 rounds into it before we ran out of bullets! 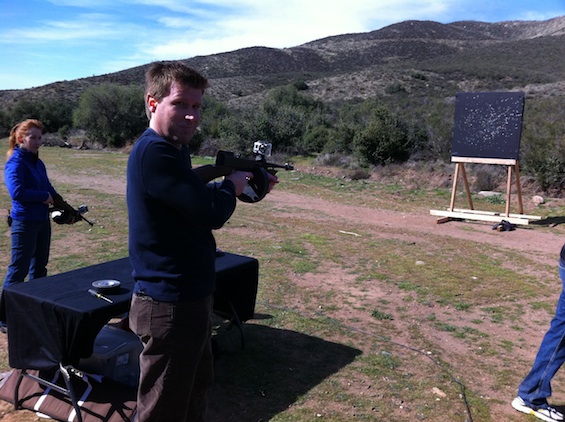 How do you kill a planetary magnetic field?   They originate because of convection in the molten iron in the cores of planets.  And convection happens because it is hotter in the core than at the surface.  There is one theory that says that Mars lost its magnetic field when an episode of asteroid bombardment heated the surface and destroyed the convection.  I filmed a demonstration showing this, but it didn’t work very well, so it got cut from the show.

BURNING DOWN THE HOUSE

My favorite kind of death in the universe is a thermonuclear (Type Ia) supernova, and that’s the main focus of my research.  These supernovae happen when a white dwarf star steals matter from another (secondary) star, gets too heavy and explodes.  To illustrate this, we set a house on fire!  Or, to be more precise, we went to a place where we knew they were going to set a house on fire and filmed it.  The Insurance Institute for Business and Home Safety in South Carolina is an amazing place.  They have a house built on a turntable inside of what seems like a giant hangar.  One entire wall consists of giant fans that can generate hurricane-force winds.  Using this setup they can subject the house to all kinds of dangerous scenarios and film the results.  On the day I visited they were shooting embers at the house to see if it could survive a forest fire.

How is this like a Type Ia supernova?  Here the house represents the white dwarf, and the embers the material being sucked over from the companion star.  In both cases the process will lead to ignition points and whether you get complete destruction depends on how the target is ignited and how the flame propagates.  In a white dwarf star, if it ignites on the outside, it can cause a nova, but the white dwarf can survive.  But if it ignites on the inside (this is what happens when you add mass), the white dwarf is doomed to explode.  It also depends on what the star is made of.  Carbon is explosive in stars like these and will blow the thing right up, but if it doesn’t have carbon you won’t get a supernova.  Similarly, in the case of the house, survivability depends on the ignition points and the materials the house is made of.  One thing I learned while filming this is that a house can quite often survive a forest fire.  It isn’t a wall of flame that generally destroys houses, it is ignition from little embers.  A common scenario is that a spark hits dry leaves on the roof of a house.  This might ignite leaves in the gutter, which burn and fall, and if the house is surrounded by mulch or vegetation, these can then go up in flames, taking the house with it.  And if you get some embers on the inside, like through an open window, you can forget it – the house is almost surely going up in flames.  This is not unlike a white dwarf star.

We got some very impressive footage.  Here’s a picture I took of the house as it started to burn: 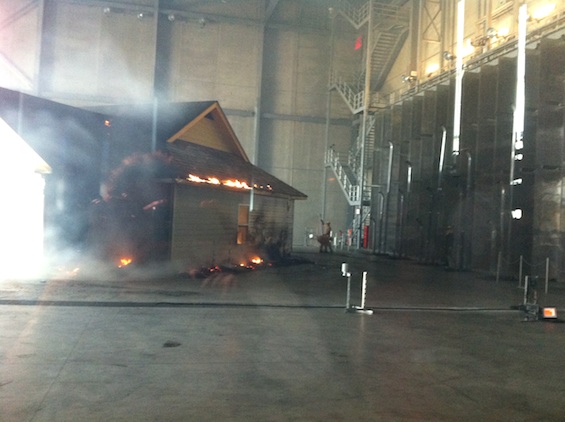 There are some stars racing through our galaxy that have velocities high enough that they can actually escape the galaxy.  How is this possible – how did they get going so fast?  It has to do with another mode of stellar death – an encounter with the black hole at the center of the galaxy.

If a binary star system wanders too close the galaxy’s central supermassive black hole, one star can get captured by the black hole, and the other can be sent zooming off at a thousand kilometers per second– it becomes a “hypervelocity” star – one that is capable of escaping the galaxy.  The star that gets captured may orbit the black hole for a while, but in rare cases it can get ripped apart by the tidal forces of the black hole.

After a few tests where we watched while hiding behind a truck so as not to get hit in the head by a flying cannonball, Sigrid and I decided to stand way up on a hill while the experiment went on down below. 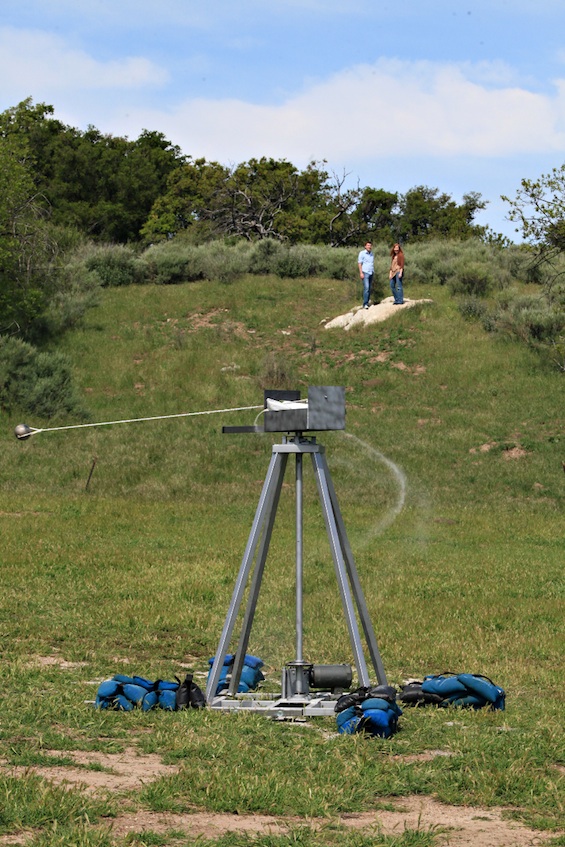 It worked!  We sent a cannonball flying.  I love it when we create a physical analog of some obscure astronomical process.  The physics isn’t exactly the same as what goes on when a black hole creates a hypervelocity star, but we show that in a computer animation.

FALLING INTO A BLACK HOLE

Maybe my favorite death trap is a black hole.  The usual way people talk about getting killed by one is by getting too close.  If that happens tidal forces would rip you apart.  If you were falling in feet-first gravity would be acting so much stronger on your feet than your head that it would rip you in half (or many pieces).  But before that would happen you could get accelerated to death.  We all know that fighter pilots get subjected to tremendous g-forces that can cause them to black out.  But if you were flying towards a black hole, you could be subjected to g-forces that are thousands of times greater.  To see what this would do to your torso, Sigrid close put a turkey in a centrifuge!  Here’s the setup: 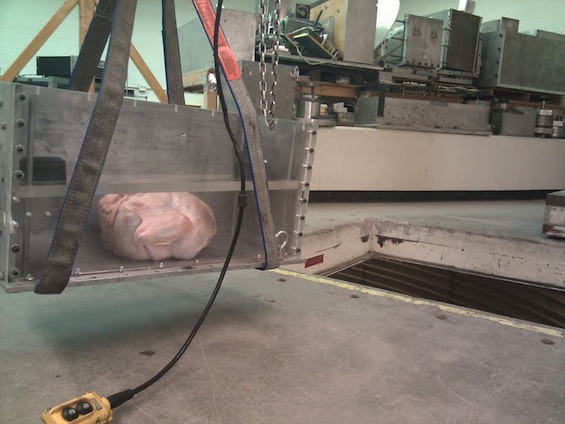 How many g’s does it take to crush you?  You’ll have to watch the show to find out.  Sigrid is a vegetarian, so this was hard for her.  But her reaction is priceless!

After that, Sigrid went to Boulder to check out Professor Andrew Hamilton’s black hole simulator.  They explored what it is like inside a black hole!

All in all, a fun episode, and a fun series!  At least, I had a blast making them.  I hope we get to do it again next season.

I leave you with a favorite couple of pictures of mine from a segment that got cut from the US version of this episode:  Sigrid using a flame thrower to kill a magnetic field! 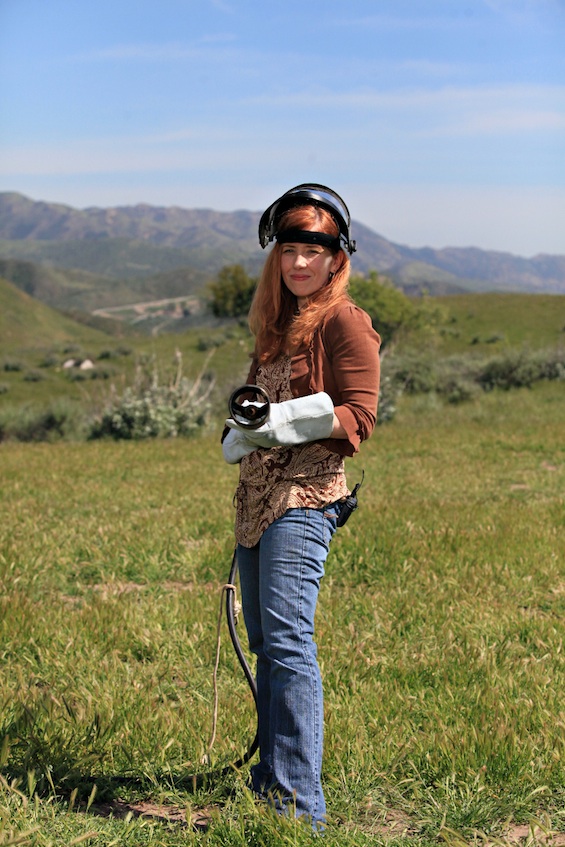 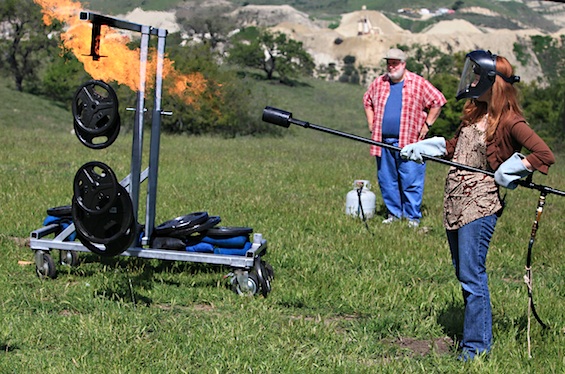