This week on KNOWN UNIVERSE we tackle how to get off of the Earth.  This one is less of my area of expertise, and I was pretty busy when we were filming it, so I’m only in one segment.  But that segment, watching a rocket engine test at NASA Stennis Space Center in Mississippi, was a hell of a lot of fun to film.  More on that later.  First up:  Mike Massimino, Steve “Jake” Jacobs, and David Kaplan test the efficiency of various rocket fuels.

To do this, Mike and Jake took a cannon (why do they always get to play pirate?) and loaded it with different fuels: gunpowder, flash powder, and gasoline.  Then, they shot the cannon and had David mark the distance each cannonball flew.    And just to be sure they did it correctly, they  filmed it with a high speed camera against a background they could use to measure distances and calculate velocities. 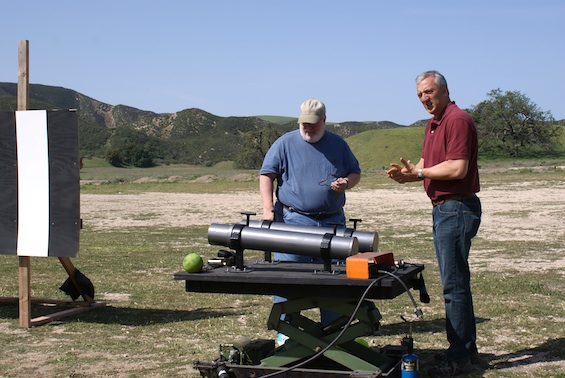 The one segment I’m in this week was a spectacular one – one of my favorite things I got to do on the show.  I went to NASA Stennis Space Center in Mississippi and watch a rocket engine test!

Stennis is only about an hour outside of New Orleans, and it is where NASA has been testing its engines since the early 60s.  The site was chosen because it was a sparsely populated area, but to build it they actually relocated 5 small towns that existed on the land.  Some remnants of those towns still exist there.  It also had to have access to barges because the Saturn V engines they tested there had to get to Florida and were too big to be transported over land.

First I got to go into a huge facility where a bunch of engines are stored.  Here I am hanging out with some engines.

The things on the left are RS-68 engines for the Delta IV rockets, and the thing in the middle is a Space Shuttle Main Engine!  I saw lots of them there.  The RS-68 and the SSMEs are very different.  If the SSME is a Ferrari, then the RS-68 is a Chevy.  That’s partly because the SSMEs have to be reusable.   As a result they are much more complicated.  The nozzle of these engines can reach temperatures about half that of the surface of the Sun.  As a result, the SSMEs must be cooled with liquid hydrogen to ensure they don’t melt.  But the nozzle of the RS-68 just oblates away as it launches – it essentially melts from the inside out.

That was the strangest workshop I’ve ever been in – everything was amazingly clean and organized.    Every surface sparkled.  Every tool had a spot it had to go into.  That’s because lives are on the line, and you can’t afford to have dirt or lost tools gumming up your engines.

These engines weigh tons, but one fun thing I got to do was move one of them around on an air bearing.  It is basically like an air hockey table – they have these huge machines that create a cushion of air under the rocket engine, allowing one person (actually you need a few for steering) to move the many-ton engine where you want it to go.  That got cut from the show, but it was fun!

But the real fun started outside when I got to watch a Delta IV engine test live!  I’ve been to a Space Shuttle launch before, but this was even better.  The Shuttle launch was spectacular, but the downer is that you can only get a few miles away at the closest.  For this test I was probably more like a thousand yards away.  The other difference is that in a Shuttle launch you experience it for a few seconds and then it is gone.  This rocket engine test keeps going for nearly three minutes because the engine is bolted into the test stand.    There is a huge deafening roar, so powerful you can feel it all over your body and you can’t even hear another person if they are standing next to you and screaming

Just check out the goofy look on my face when watching this thing: 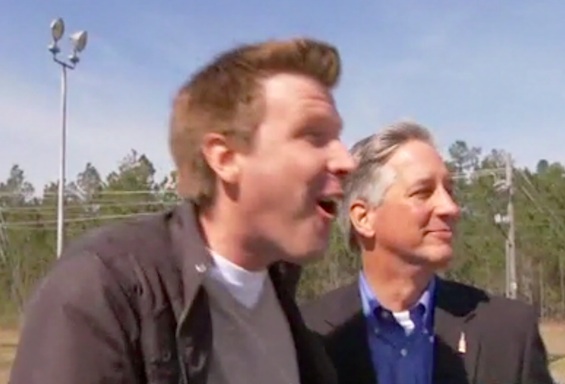 The other crazy part is that it is liquid oxygen and liquid hydrogen being combined to make water that causes such a violent reaction that you can ride it to space.  It actually creates a cloud of steam in the process, which quickly condenses into rain.  We got lucky with the wind and the steam blew just off to the right of us.  A slightly different wind direction and we, and all of our camera and audio equipment, would have been drenched.

So much fun!  I don’t think I’ll ever get another opportunity to see something like that again.

TO BOLDLY GO… WHEREVER THIS ELEVATOR GOES

If you really want to make space travel more efficient chemical rockets are no good.  You need a space elevator!  Start with an anchor in geostationary orbit, and lower a tether down to Earth.  Then, in theory, you can ride a platform up to orbit.  But there are a couple of issues:  material strength and power.

We need something super-strong to make something that can support its own weight going all the way to space.  Years ago, such a material was the stuff of science fiction fantasy, but now we have it:  carbon nanotubes.  These are carbon molecules arranged in long shapes, giving them super-strength.  David Kaplan went on a field trip and actually learned how to make some.  I like this segment, because I never knew how they were made, and they are so strange that they seem like advanced super-tech.  They are, but they are now a reality!

The second problem is powering the elevator.  If you have to take the fuel with you, it becomes that much harder to lift the platform.  One solution is to build a laser and beam the power to the moving platform.  Sigrid Close got to go to a lab where she was able to witness a test of this concept in action.

DOCKING TO THE ISS

Once you get out of the Earth’s gravity, you’ll probably want to go somewhere.  You might even have to dock with a space station.  Dave got have Mike teach him how to dock the Shuttle to the ISS.  I’m jealous!  I want to learn space-docking skills from an astronaut!

Landing on the surface of a planet can be just as tricky as getting off one.  Take Mars – it has an atmosphere too thin to make parachutes very effective.   The current Mars rovers had to use a wacky airbag landing system and bounce their way to a landing.  But the next Mars rover, Curiosity, is too big for that.  So it will use a four-part landing strategy: heat shield, parachute, thrusters, and a sky crane!  After the parachute stage, thrusters will fire to slow the spacecraft’s descent.  Then it will hover and lower the rover down on ropes!  Seriously!

To test whether a spacecraft can slow its descent using thrusters, David Kaplan visited the Marshal Space Flight Center.  There they are dropping a prototype lander from hundreds of feet and slowing it with compressed air, before letting it fall into a net.  Very impressive!

Speaking of rovers, NASA is testing other Mars rover concepts beyond Curiosity.  One, the Axel Rover, can split off two wheels, which can then descend steep terrain to get to the bottom of otherwise-unreachable craters.  To see it in action, Sigrid decided to race the rover to the bottom of a steep cliff. 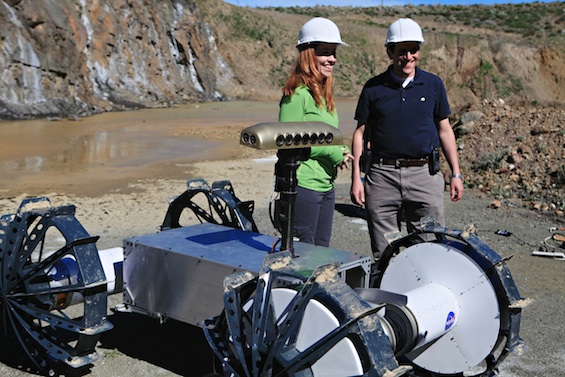 For real long-distance travel in space you want your engines to be as efficient as possible.  The most efficient currently-viable engine for cruising in space is an ion engine.  Sigrid got to see an advanced form of this in action:  a VASIMIR rocket.  That’s a Variable Specific Impulse Magnetoplasma Rocket.  Basically you shoot ionized gas (a plasma) out of a rocket using a magnetic field to guide it.  You wouldn’t use this kind of engine to get off the Earth (because it doesn’t have high thrust), but you would use it to provide efficient propulsion when you get there.  That’s TIE Fighter technology!  (They stand for Twin Ion Engine, though really it is because they look like bow ties.)

That’s it for Episode 7.  For an “out of this world” kind of show, this one is pretty grounded.   Most of this stuff isn’t science fiction, it is happening either in a laboratory or in real space missions.

Next week:  the last episode of the season, and it is an awesome astronomical one:  THE END OF THE WORLD!