Hey folks, Harry here...  I assume a bunch of you have gone out and seen SUPER 8, I've seen the film a couple of times now, and I have to say - watching it followed by CLOSE ENCOUNTERS OF THE THIRD KIND, SCANNERS & JOHN CARPENTER'S THE THING...  well, the amazing thing was how well it actually did play with those classics.   In particular, visually - it made me notice just how many lens flares were in CEOTTK and JC'sTT.   There's a ton.   And there is something about them that I dig.   All of that said, I've been enjoying my weekend, when I received a letter from Eddie H saying that he'd seen SUPER 8 and went home totally inspired to draw the "secret" critter from SUPER 8.   Upon seeing it, I smiled and decided to share it with JJ Abrams - as - seriously, how much Fan Art has he seen yet?  Right?   This sucker has severely been underground until this weekend.

While I awaited a response from JJ - I discovered that Paramount had released the following "Government Reel" that gives a bit of the history and understanding regarding the creature in the film.   Now - you actually get more details about it here than you do in the film...  Here, take a look...


Alright - so around this time, I get a response from JJ in regards to the Art below stating simply, "MINT!!!!!" - and then he answered a simple curious question I had regarding the thing in the "Mystery Box".    You see, within the film it is never given a name...  it's just a "thing" or an "alien" or simply a "monster" - but just like the Alien critter from Venus that the little boy sells to the Professor in 20 MILLION MILES TO EARTH so he can buy a real hat from Texas...   the creature was nameless in the film, but Ray Harryhausen called the critter Ymir.   Love that name.   Well, I wanted to know what JJ and the team that brought this creature to life...  how did they refer to it, was it given a name?   JJ responded:
"We nicknamed him "Cooper". Which is why Bruce Greenwood has that credit at the end: he did some motion/facial capture for the alien."
SO - here's the artwork from Eddie H, which he drew from memory...   I figured I'd share, and see if anyone else out there has been trying to draw this critter - and give a place to share your work.   SO - if you've been compulsively drawing or painting COOPER - let's see em.   That said, I can't wait to see if I can see any Bruce Greenwood in COOPER next time I see SUPER 8.   Here's Eddie H's version... 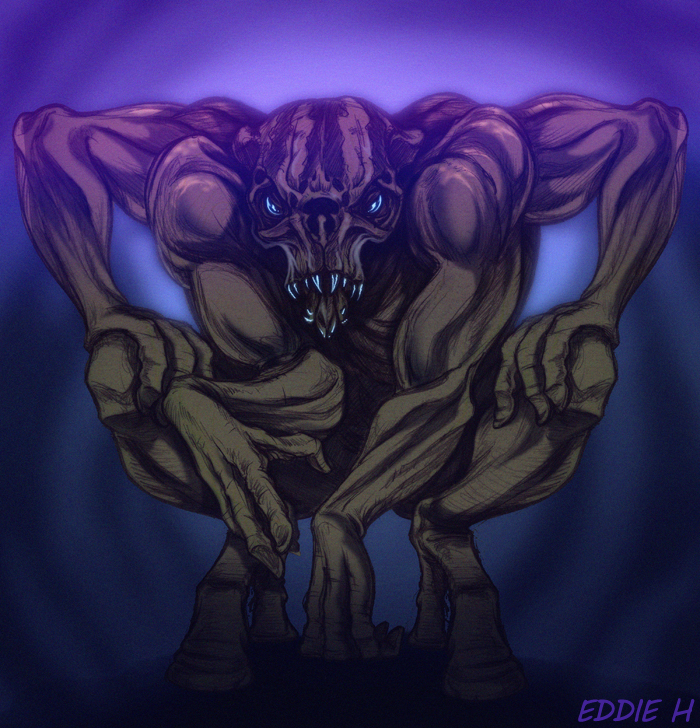