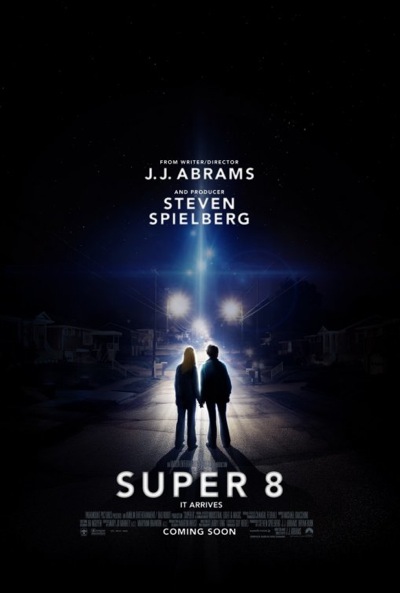 It's a beautiful Sunday afternoon in West Hollywood, and I'm sitting in a suite at the Four Seasons nervously repeating the same two words over and over in my head: "Kyle Chandler, Kyle Chandler, Kyle Chandler...". Creepy, I know, but if I don't sear the man's name into my cerebral cortex, there is an excellent chance that, at some point during our interview, I'm going to call him Coach Taylor. And then he'll give me that glare of extreme, how-could-you-let-me-down-after-all-I've-done-for-you disappointment. And then I'll feel awful. And then he'll make me run laps around the hotel.

Chandler's Eric Taylor on FRIDAY NIGHT LIGHTS is, to my mind, one of the all-time great television dads: stern, principled, and yet vulnerable in the face of adversity - of which there was plenty during the show's superb (and, sadly, just-concluded) five-season run. Chandler brought a rugged decency to the character; in fact, his Taylor was probably too compassionate to survive the crucible of Texas high school football. But the show was so perceptive about small-town life in America that you didn't mind. You wanted to believe there are more Eric Taylors out there.

When J.J. Abrams was looking for a tough, but ultimately loving father figure to anchor his kids-on-a-mission fantasy, it's only natural that the veteran television producer would look to the small screen for his man. And Chandler, who'd already demonstrated via small, but memorable roles in THE KINGDOM and KING KONG that he belonged in movies, comes through in a big way in SUPER 8. Though the deputy sheriff character of Jackson Lamb is significantly colder than Taylor (he's coped with the sudden death of his wife by disappearing into his job, alienating his son Joe in the process), we can see the kind, loving father lurking behind the brusque exterior. This isn't the writing; this is Chandler. It's a movie star turn that, hyperbole be damned, brings to mind Gary Cooper; he's a throwback actor for a throwback movie.

In person, Chandler is sincere and deeply humble, but there's also a searching quality that is only hinted at in his recent work. When we finished the interview, he graciously asked if he'd given me a useful answer to my final question, hoping he'd been understood, but also making sure that I had what I needed. It was almost as if he was worried he'd let me down. Impossible. Good as he's been over his twenty-plus-year career, I think Chandler's still got some surprises left. Let's hope Hollywood gives him a shot, rather than more of the same. 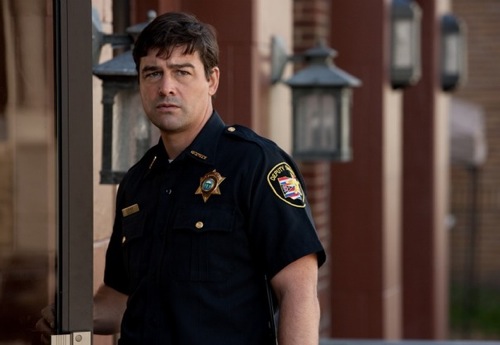 Mr. Beaks: How did this role get offered to you?

Kyle Chandler: I was in town, and I was going to the airport that day. My manager called and said, "J.J. Abrams is doing something, so, if you have interest, before you leave town could you go in and audition for it?" Well, of course I had interest. So I went in to audition, and then I went back to Texas. And then he called me and said, "You've got the part if you want it, but you don't get to see the script until you come to the set." So I was like, "Okay." (Laughs)

It's fun working with J.J., because he knows how I did FRIDAY NIGHT LIGHTS and how we shot. I love moving along, and I like the unknown. I've learned now to get out of rehearsal mode: you come to the set, you know your character 100%, you know your lines 100%, and you begin. [J.J.] knew that somehow, so he would often say, "Do you want a rehearsal?" And of course I'd always be, "No, no." But you find out so much when you screw up in the first rehearsal when it's live, as opposed to a rehearsal that's not live, because you're putting it all out there. So going up there and not seeing a script on top of it is another oddity about him. I love it. I love the fact that he's the way he is, and I think it shows in all of his work, too.

Beaks: So you were discovering your character as you shot the film?

Chandler: Absolutely. And he's that type of director who I think is pretty diverse. I think he could probably work with anyone. I like working with that. And he seemed to just shoot from the hip: see what we get, and tweak it if need be, but maybe something really great is going to come up.

He obviously works well with kids. And that's because he's so damn intelligent. I mean, you've seen his movies. He can direct. He knows. He's got the vision, as well as the eye for seeing how scenes are going to come together. He's directing, editing, writing... he's doing everything at once, and you can almost hear his brain humming along. But when he's working with the kids, you can see he's not working with kids; he's working with young actors. And in working with young actors, he works with a great amount of respect - which I think allows them to have respect in their own work, and to have that discipline to say, "Now I've got this responsibility." That's the way it should be. Some of the best acting ever, when you see kids in a movie... well, THE BAD SEED first of all. The little girl in THE BAD SEED was awesome. And of course TO KILL A MOCKINGBIRD.

Beaks: Some of the most indelible child performances ever.

Chandler: Yeah! Just wonderful. But these guys [in SUPER 8] are incredible, too. And for Joel [Courtney] to have never done anything before, that's pretty daunting. Ten years from now, someone's going to say, "Hey, what did you in the year 2011." And he's going to say, "Well, let me tell you. In 2011, I had my first blockbuster movie come out!"

Beaks: I don't think he'll have to explain it. I think people will just know that's where it began. Speaking of first-timers, I interviewed Riley Griffiths last week.

Chandler: (In a deep voice) "Riley. Riley didn't always talk like this." (Laughs) And he wasn't taller than me the last time I saw him either.

Beaks: I guess he slimmed out like his character said he would in the movie.

Beaks: Riley said they had a lot of fun on the set. He said there was some ding-dong ditching going on.

Chandler: Yeah, they were ding-dong ditching me, the little bastards. I never could catch them.

Chandler: No! They were fast! They're fast kids! And Riley plays his role so well, too. You believe him. You believe him outside of being who he his, his character in the movie. He plays the director wonderfully. He's really into it. All of those guys are so good. You really want to be with them. My character would've been the kid who wanted to blow everything up [Cary, played by Ryan Lee]. That was me. And Ryan's a great guy, too. He's a neat kid. They're all such good actors. And Elle Fanning. You can't forget Elle Fanning. Man, when she puts that scene together at the train station before the train derails, what she does right there... that's the whole story right there from that side of the show. It all just gels. She's really, really good.

Beaks: And her zombie moment with Joel. That's magical.

Chandler: She is a wonderful actress.

Beaks: Looking at your career, it's interesting to me how some television actors steadily acquire a following over multiple shows. There's a group of people who remember you from TOUR OF DUTY. And then there's HOMEFRONT - where you played for the Cleveland Indians, I should add...

Chandler: I've still got a jacket that Bob Feller signed. I was on THE MORNING EXCHANGE, and I talked to him. Oddly enough, I told him that a friend of mine, Trent, his grandfather used to play baseball. Unfortunately, I didn't know the whole story when I was on THE MORNING EXCHANGE. Trent's grandfather's name was Skeeter Newsome. Skeeter Newsome was the first player in the big leagues to wear a helmet because Bob Feller beaned him, and [Skeeter] was never the same again. Trent didn't tell me his grandfather, Skeeter Newsome, was beaned in the head with a ball and all of that other stuff. So when I asked Bob Feller that, man... I'm glad he signed the jacket before I asked him that, because afterwards I don't think he was going to want to give me a signed jacket. (Laughs) I got a little upset with my buddy Trent when I got back to L.A.

Beaks: Wow. That had to be a haunting moment for Feller.

Beaks: So there's HOMEFRONT. Then there was EARLY EDITION. And on to FRIDAY NIGHT LIGHTS. Do you feel like there was some kind of logical progression or design in building to this moment in your career?

Chandler: Man, I don't know. To go from FRIDAY NIGHT LIGHTS to [SUPER 8], it's a blessing. I've got the greatest career. Peter Berg said to me one day, "Dude, how do you do it? You're constantly working, but no one knows who you are." I don't mind that too much. My biggest goals when I came out to Los Angeles were to be married and have a family, and be able to afford to live as an actor. That's what I do now. And little by little, I keep working with these people. This time it's J.J. Abrams and Steven Spielberg. I'm not going to question it. I don't know what I'm going to do next, and I don't care. Everything just keeps going. Like my pop used to say, "Just listen to your gut." That's what I do. In for the long haul; the rest is all just trappings. But to be able to work with these guys, that's pretty fortunate on my part, I'll tell you.

Beaks: But building off of FRIDAY NIGHT LIGHTS, the movie star thing is just starting to happen for you. I think you've got a classic presence. Do you look to any movie stars and say, "That's the career I'd like to have?"

Chandler: I don't think about it like that at all. I don't place upon myself, "Oh, I'm going to be a movie star now." I don't even know what a movie star truly is, other than a movie star is someone everyone knows and he's in all the tabloids, and he's a great actor because he's a movie star!!! I don't know that I want to be a movie star in that sense. But if I can keep working with folks like this, and carry on in my career, and still have a family, and move on, I'll keep rolling along with the hits. There are some careers that I look at, but it's mostly for the longevity and the variety of work. I'm still learning. Each one of these is an acting class to me. I've got a long road to go.