Will WB Digitally Remove The Tattoo From THE HANGOVER PART II Video Release? 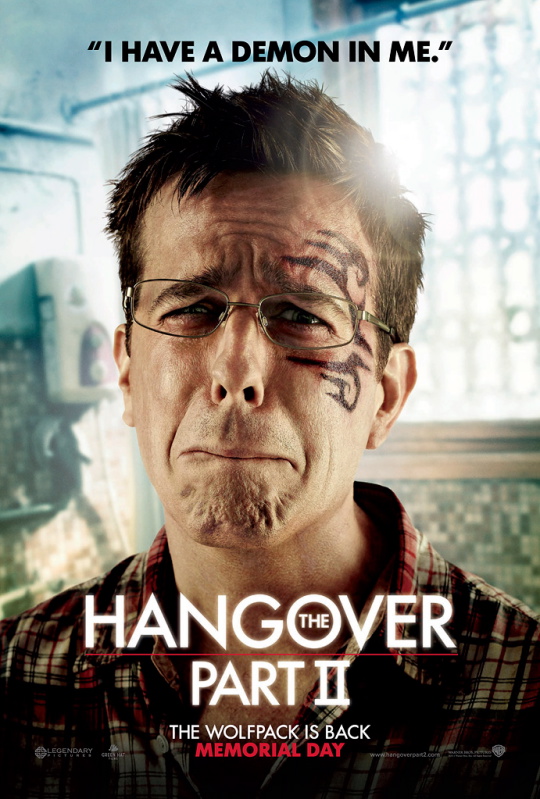 This is getting a bit silly now.  If you haven't heard, Mike Tyson's tattoo artist is suing Warner Brothers for their usage of his artwork in THE HANGOVER PART II.  In case you haven't seen it, Stu (Ed Helms) wakes up in Bangkok with a replica of Tyson's tattoo on his face.  The artist, S. Victor Whitmill, sued to keep the film from being released, as he stated that the studio did not ask for permission to use it in the film.  The lawsuit is still pending, but a judge recently denied WB's motion to dismiss.  It was assumed that WB and Whitmill would work something out, but apparently that's not happening.

Now, according to the Hollywood Reporter, if the issue isn't resolved soon, WB may digitally remove the tattoo from all its video releases of the film once it leaves theaters.  WB will replace the tattoo with a different piece of artwork altogether.  If the parties don't resolve their issues beforehand, the trial should take place in February of next year, after the release of THE HANGOVER PART II on video, so something needs to happen fairly soon because it takes some time to prepare the film for wide video release.  A private mediation is scheduled for June 16th.

This probably shouldn't have gotten as far as it has, and I'd imagine that digitally fixing the film will take a substantial amount of time and money to do.  It would seem that it might be in WB's best interest to pay the guy.  There may be principle involved though, and it seems like both parties are entrenched and not much give-and-take is happening here.  In the meantime, if you need to see Stu's original tattoo before it leaves theaters, THE HANGOVER PART II is still playing everywhere.