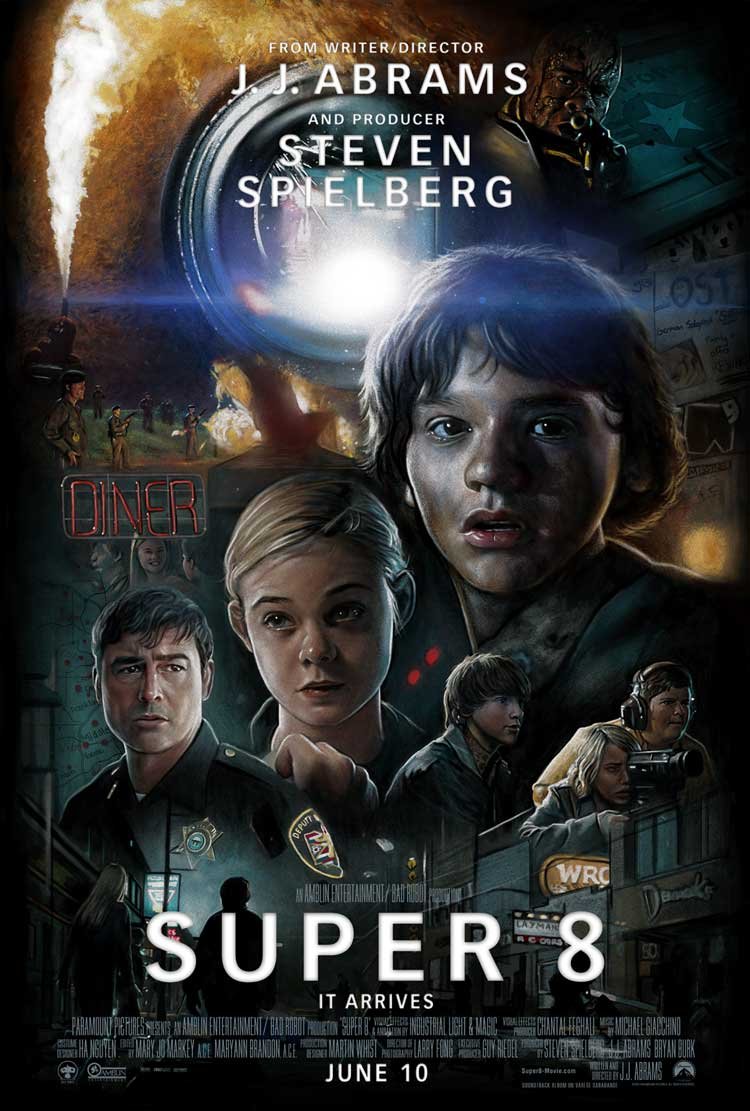 Thanks to IMP Awards for the new poster.

J.J. Abrams' SUPER 8 wears its influences proudly.  There's no mystery where SUPER 8 comes from - it's a straight-up 1970s/1980s adventure film, with E.T., THE THING, JAWS, POLTERGEIST, you name it - those movies that we worshipped at the altar of when you were a child, if you're a Gen-Xer.  It's no accident that this is a Steven Spielberg production - SUPER 8 feels like a film he would have made back then, although while there are places in Spielberg's films that work perfectly, there are a few places in SUPER 8 where Abrams doesn't quite stick the landing.  More on that in a bit.

As Quint's the resident JAWS guy, I'm all over E.T. like a cheap (rubber) suit.  The movie had, and continues to have, an enormous influence on me and my outlook on movies, and hell, just life in general.  E.T. is probably the reason I'm such an optimist about things - with a little gumption, help from your friends, and maybe a really kickass bike, I think people can accomplish anything they set their mind to.  I've probably seen the film, I'd guess, at least 80 or 90 times.  I'd say that's about right.  If it's on cable (and the past couple of years it's been on HBO a lot), and I see it's on, I'll sit and finish it.  In fact, it's a funny thing - if E.T. is on and my wife is flipping through the channels, she passes that one up very rapidly, because if a snippet of it plays I'll tell her to turn it back.  So when SUPER 8 was announced, and that it was a throwback to those films of my childhood, the Spielberg Years, as it were, my anticipation level for it shot through the roof.  Also, my daughter would be the same age as I was when I first saw E.T., and I really wanted to see this with her for the first time, and see how she reacted to it.

Is SUPER 8 as good as E.T.?  No way in hell.  Furthermore, I don't think it wants to be.  What SUPER 8 is is a movie that recalls all those great films of Gen-X youth, those children of 1982 who are now parents, and shares that experience and wonder with a new generation.  SUPER 8 is the ultimate YOU KNOW, FOR KIDS movie - a film that parents can talk about with their kids on the way home, and have the parents say, "If you loved SUPER 8, you'll lose your mind over GREMLINS, or E.T., or JAWS, or POLTERGEIST, or RAIDERS OF THE LOST ARK, or CLOSE ENCOUNTERS, or BACK TO THE FUTURE," and have a shared experience with their kids.  People seem to forget, because we have all these choices now, but Spielberg's staple was one of the few places providing this movie drug to the kids, other than the STAR WARS films.

You should all know the plot by now - a group of kids in 1979 are filming their own zombie film when a train crash nearly kills them and something escapes from one of the cars.  The military, led by Nelec (Noah Emmerich), moves in to find and capture the creature.  Joe Lamb (Joel Courtney) and his father Jackson Lamb (Kyle Chandler) try to repair their broken relationship amidst everything; Joe's mother died in an accident at the factory four months earlier, and Jackson is still trying to pick up the pieces.  As events escalate, Joe finds himself racing against time to save his friend Alice (Elle Fanning) and get to the truth of what is happening.

It's been written in various articles that Abrams originally came up with the coming-of-age story first, and then attached the monster movie to it.  There's a lot of places in the movie that do feel like an abrupt shift in tone, having characters behave differently than they've been established previously in the film.  And although the monster portion of SUPER 8 lacks focus, it still works, because all these events are shot from the perspective of the kids, and it becomes a grand adventure.  It does feel like Abrams needed to take a couple more drafts to iron out exactly what he wanted the alien to be - is it a monster, or is it misunderstood?  It's never exactly clear.  Abrams wanted to do something different than E.T. or ALIEN, so he made the creature a mix of both and that makes the alien's story not make a lot of logical sense in the light of day.  But the creature design is impressive, and the movie knows how to deliver the jolts and action.  Abrams has always been effective at that.

Abrams is also very effective with performance, and that's where SUPER 8 shines.  All the kids, without exception, are terrific in their roles, especially Courtney and Riley Griffiths, who plays Charles Kaznyk, the director of the Super 8 film and Joe's best friend.  Elle Fanning, who plays Alice, is also very good - she and Joe have a shared tragedy, and as their relationship deepens, it causes problems with their fathers.  Alice's father, Louis (Ron Eldard) may be indirectly responsible for Joe's mom's death, and that incident has broken Louis, and the two fathers want their children to not have any contact.  But as kids tend to do, Alice and Joe manage to find each other, and I found this part of the film especially poignant.  Although the monster story is flawed, the story of the kids and their parents is the main one, and that's done perfectly.

Lens flares?  Yeah, there's a few.  Honestly and personally, I didn't notice them too much.  They didn't distract from the film for me. I think Abrams, again, is trying for that Spielberg aesthetic, and much of the time it works.  Other than the creature design, which feels modern, the movie could have come straight out of the 1970s, even with the Altmanesque overlapping dialogue, which Spielberg's done quite a bit himself in his early films.  Just watch SUGARLAND EXPRESS, that's full of Altman-style dialogue.  SUPER 8 successfully evokes a certain time, and there were only a couple of moments that made me aware that it's a modern film.

What's the best thing about SUPER 8?  Well, I saw it with my daughter.  I've shown her many films over the years, and she's loved many of them, and some she's not taken to like I did in my youth.  But SUPER 8 absorbed her completely.  She jumped at all the best moments, laughed, and adored this movie.  I think SUPER 8 is a terrific movie in that way - it's an entry film into those movies we loved in the 1970s and 1980s, and as we were leaving I was talking with her about all these wonderful movies that she hadn't yet seen and she was eager to try them.  She hasn't seen JAWS yet because she doesn't do blood or gore very well, but after SUPER 8?  I think I can sell it.  If for nothing else, SUPER 8 will open kids up to an amazing new world in film, where not everything was based on a comic book, where ideas took flight as opposed to massive amounts of CGI, and true wonder held sway.  In that regard, SUPER 8 is a real family film that you get to take with you when you leave the theater, and share with your loved ones, and that's a real treasure.