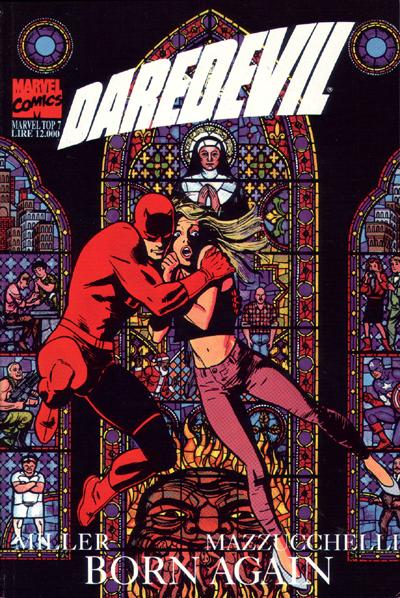 I hate Mark Steven Johnson's DAREDEVIL adaptation.  He completely misunderstood the character, and turned Daredevil into Batman Lite, which the character certainly is not.  I know people don't care for the casting much, and Ben Affleck wasn't my first choice, but I thought he did... okay.  Jennifer Garner as Elektra... didn't work for me.  When the film was ramping up before release, I was on record as thinking the Michael Clarke Duncan casting for Kingpin was actually all right.  I didn't and still don't care about the race of the actor playing Wilson "Kingpin" Fisk, but I truly believed that they would get the spirit of the character right.  Boy, was I wrong on that one.  The Kingpin was written all wrong, was acted all wrong, and so they screwed up that character too.  The worst thing?  They totally flubbed the reveal of Daredevil's identity to Kingpin.   They didn't just fumble the ball, they fumbled it 3 yards from the other team's end zone.  The only character and actor that came off smelling okay was Colin Farrell's Bullseye.  But when it was announced a while back that a reboot was coming, well, this is one reboot I wholeheartedly endorsed.

I haven't read him in recent years, but in the 1980s I was all about Daredevil.  He was my favorite Marvel character.  He's not simply a Batman-type clone - Matt Murdock truly loved the law and justice, and he only put the suit on when there was no other way.  I especially loved Frank Miller and David Mazzucchelli's BORN AGAIN arc, which had Daredevil's identity revealed to the Kingpin properly.  But Kingpin didn't go pounding on Matt Murdock's door right away.  No, he put the screws to him, leaving Murdock a shell of a man, penniless, disbarred, and broken and only then did Kingpin defeat him physically.  But from that defeat Murdock rose, stronger than ever.  I know everyone loves THE DARK KNIGHT RETURNS, and I do too.  But for me, this is my favorite Frank Miller story, and I remember waiting for those monthly issues really wondering what would happen next.

Well, the reboot is happening, and according to Hollywood Reporter, they have a writer attached - FRINGE's Brad Caleb Kane, and he's adapting BORN AGAIN for the film.  It's too bad this is under Fox and not Paramount, because it'd be pretty freaking cool if Chris Evans were to reprise his role as Captain America for the climax.  David Slade is still listed to direct.  I really hope this pays off for Fox and DAREDEVIL.  I think the character's too good to die under one lousy film.