Comicpalooza, Houston's version of ComicCon, was last weekend, and I thought it went off rather well, all things considered.  It's a new con, started only three years ago in the lobby of Houston's Alamo Drafthouse West Oaks, and quickly grew to fill the third floor of the George R. Brown Convention Center.  That's a pretty substantial jump up for three years, as the GRB is pretty huge and Comicpalooza used the space well.  It was a lot of fun and I can't wait to go again next year.

My good friend Jen Dracowyrm wrote up his experience at the con and took pictures of the event.  edward James Olmos was especially gracious and giving of his time, and I hope the projects he's working on really come to fruition.  Here's Jen:

PROS AT THE CONS

Houston has played host to many cool fests and cons throughout the past couple of decades, including Oni Con (anime), Crypticon, monthly psychic and holistic cons and even gun shows.  The sun worshippers go to their fests during the late spring and summer days and the ones where you dress up as your favorite animated character usually have dominion over the fall and winter months.  You’d think having a convention named Comicpalooza would fit nicely with the squirreled away nuts of winter, eh?  You silly. 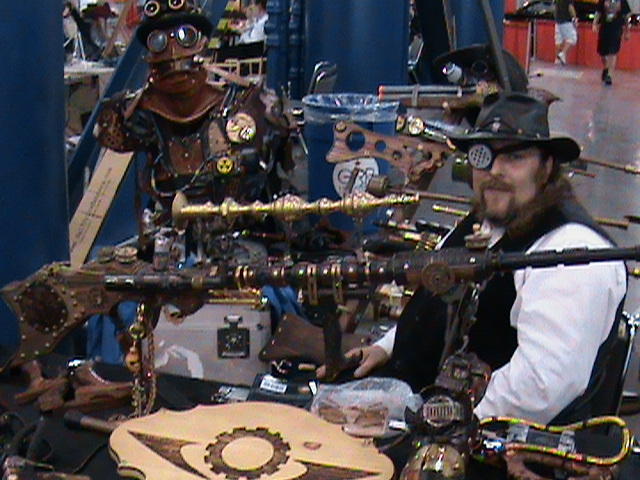 Just in its third year, Comicpalooza has swollen the ranks and taken over the spacious third floor of the George R Brown convention center.  ‘Swollen’ and ‘rank’, we’ll get to that in a minute.  Good news, John Simons’ gamble paid off with a crowd that peaked on Saturday, but still had enough to offer late into the day on Sunday that you didn’t feel like you just got kicked out of bed the next day and told to find a ride home. 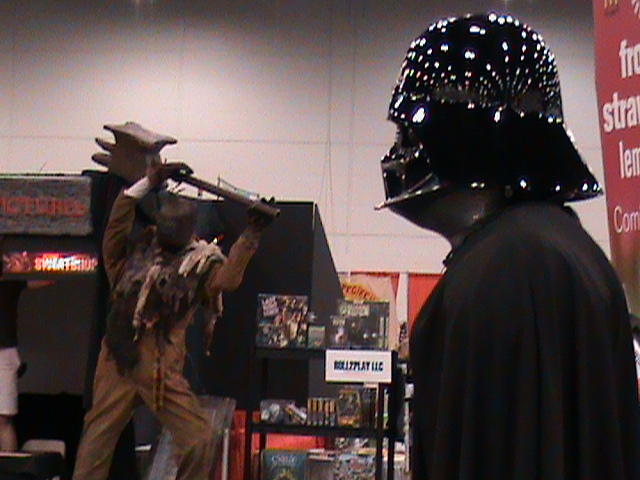 Among the special guests were convention circuit veterans such as Tony Todd, Sam Trammell, and Jeremy Bulloch.  Star Trek was also represented by Marina Sirtis and Steve Jackson was there and has been around making RPG’s before they were thought of as a video game genre.  A couple of the big draws were actor/director/activist Edward James Olmos and fantasy author Tad Williams.  These guys made their presence known all three days of the con, instead of the usual Q&A panel, signing and flight outta here.

I was lucky enough to catch Mr. Olmos’ Battlestar Galactica Q&A on Sunday.  To give you an idea of what he felt of his role as Commander William Adama on the show, in answer to a fan’s question about his biggest regret on the show, his answer was that the show ended.  He also spoke of his roles as Gaff in Blade Runner, Jaime Escalante in Stand and Deliver and his early days of acting on stage and in film as El Pachuco in Zoot Suit.  He kept the crowd going speaking on subjects as varied as listening to Deva Premal’s music while on the set of BSG and turning other people on to it, to his working with Dr. Aubrey de Grey of the SENS foundation which focuses on human longevity.  He stated that in his early 60’s, he’s only middle aged.

Nordling covered EJO’s (apparently that’s how he’s referred to in print) visit and interviewed him prior to the con.  I sat in on Friday to an announcement made regarding one of Tad Williams’ books, Tailchaser’s Song.  According to AICN and Fantastic Fest Elder, Paul Alvarado-Dykstra, preproduction has started on making Tailchaser’s Song into an animated, feature length film.  To help him in this task, he has enlisted long time business partner Samantha Inoue-Harte and they believe they have found the animation company that they wish to work with in Japan.  The script is finished and they have the blessings of Tad Williams, who wishes to find the right people, and then let them do what they do best.  He inadvertently gave me the idea for the title of this article, btw.

Another project based on his work that has had Mr. Williams involved in is an MMORG of his Otherland series.  Real U, a company out of Hamburg, has had 70 people working on the project for three years.  Mr. Williams believes the game will be released next year on PC and Mac’s.  Side note:  I geeked when I met Tad Williams.  I have gotten flack from friends when I say I love the Memory, Sorrow and Thorn series above Tolkien’s masterpiece, but it’s the truth.  Love my LOTR, but MS&T has a depth, darkness and humanity that I don’t find in most books, let alone high fantasy.  Both Mr. Williams and Mr. Olmos were very generous and forthcoming with their time, an example being Nord, Dork Avenger and myself hanging out with Mr. Williams on the last day of the convention for around an hour or so. 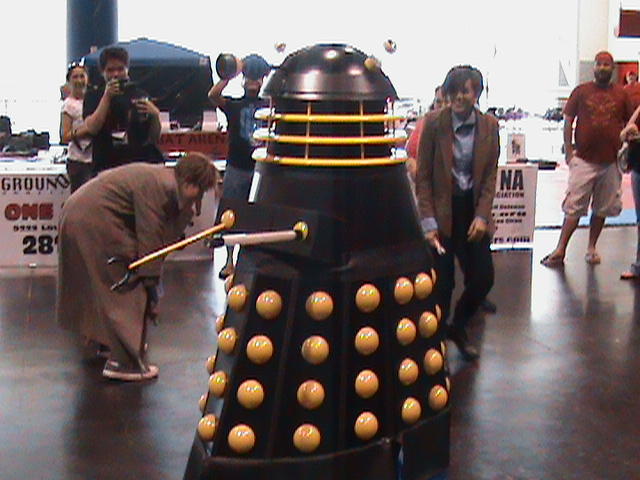 Okay, let’s see how I can wrap this up?  I saw 4 Wonder Women, 3 Leia’s and also two Dr’s Who that ran circles around one Dalek.  Steam Punkers that had to cancel a LARP due to lack of participation, Nordling’s disappointment at not being able to participate in a zombie LARP, Houston chapters of Ghostbusters and Stormtroopers, hot ladies in tiny suits and sweaty dudes in suits that were too tiny… shit what else?  Well I missed a Roller Derby bout of Star Trek vs. Star Wars (I don’t know why Nordling is always surprised that I’m a Trekkie first and foremost), didn’t get to see Steve Jackson (smite me for that one), didn’t pay Neko Neko’s Maid and Host Club (young ladies in French maid outfits) $15 to sit and watch anime with me and I couldn’t find a Lovecraftian shirt that didn’t say ‘S’, ‘M’ or ‘L’ on the label.  How do you go to sell your wares at a convention with the word ‘Comic’ in the title and not have any double to quintuple X sizes?  “That’s what happens when you come here on the last day of the show,” was the guy’s response.  Fucker. 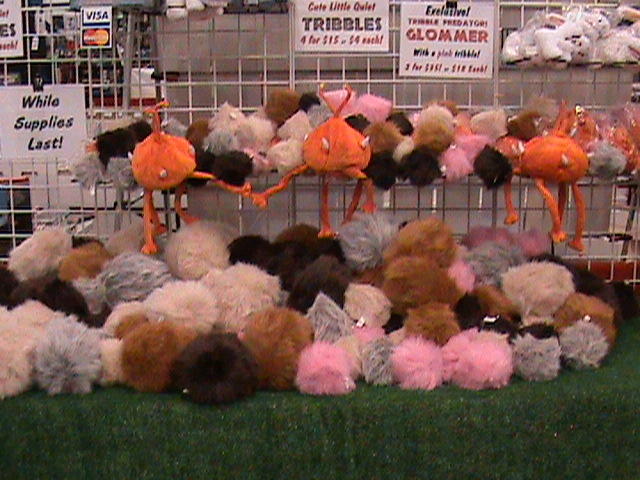 On the smaller scale of the film industry, I got to see the 2nd half of Sweatshop, a film by local filmmaker Stacy Davidson, produced by another local, Mel House and starring his wife, Melanie Donihoo.  This was a nice throw back to the splatter flix of the 80’s, with minimal CG used to enhance the prosthetic FX.  Poopoo it all you want, but Coppola started out with Dementia 13, Jackson with Bad Taste and Cronenberg with his crazy, disturbing shit.  On the no budget, for-the-love-it-level, I saw a couple of TWABI’s (This Was A Bad Idea) Resident Evil:  Residential Files, goofy shorts you can view on Youtube.  Fun stuff. 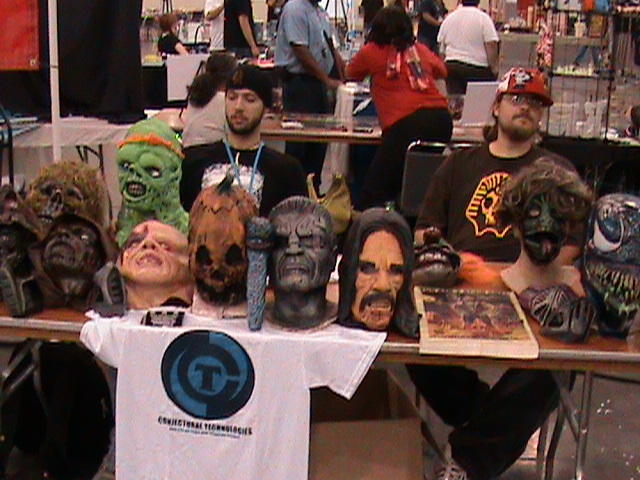 Final note:  I’d like to thank John Simons for putting this together and getting us in and AICN for being AICN.  Free SoyJoy bars was a nice gesture, but dude, if you’re not used to soy, don’t cram 4 of those to replace a meal, and then make me endure their ghosts escaping you while I sit next to you watching midnight hentai.  And as for the volleyball tournament two floors below the con, don’t think the irony was lost on me.  Don’t know who made decision to make us go past the tan and fit to the pale and not, but I don’t think that was cool.  Little T-shirt guy should’ve sold his leftovers down there.

Look forward to going back next year.  Thanks, Jen.