You've Got a Friend In Motion Pixles -- Toy Story on Sega Genesis!!

Throughout the history of videogames, various consoles have served as one of the many pulpits for the gospel of film marketing. Videogame adaptations of movies are a strange breed. Motion Pixels will examine one such game each week, dissecting the basic gameplay, the graphics, and how faithfully it adapts the film on which it is based. Some are good, some are awful, and some are just down right weird, but they are all interesting experiments. We will also take a look at other cogs in a given film’s marketing machine. Grab some popcorn and a joystick and let the games begin! 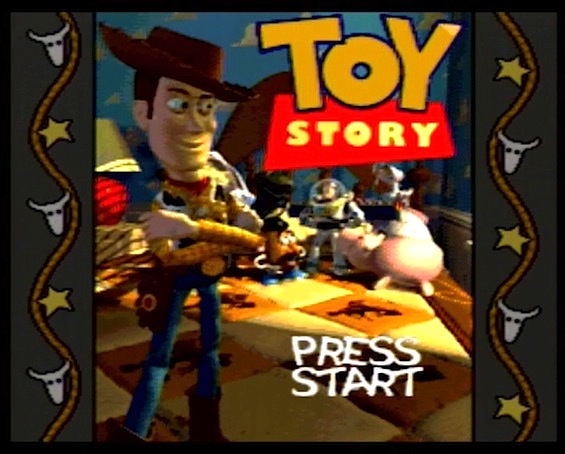 
I certainly hadn’t intended to cover two Disney-licensed Genesis games in such a short span of time, but fate intervened. I was at a used bookstore and happened to wander into a forgotten corner where a lone videogame case stood. Inside was a lovingly used (read “beat-to-shit”) copy of the Toy Story game. The label was almost completely torn off, but there was no mistaking the remnants of the faces smiling at me from the cartridge.

Toy Story looks and sounds utterly fantastic. The characters are so well rendered and fully-realized that, but for a few minor distortions, you could swear they had simply been dragged and dropped from the film directly into your console. Although I’m aware that one of the advantages the SNES had over the Genesis was a more plentiful color spectrum, I found the visuals of Toy Story on Genesis to be vibrant and engaging. The environments don’t play up the foreground depth as much as does the SNES but the vertical angles to the environments were particularly stunning. I don’t know if Andy lives in a mansion or an airport hangar, but those shelves went up for days. I also enjoyed the detail used to define the scale of objects in order to highlight the struggles inherent in being toy-sized.

The gamer plays as Woody, the beloved cowboy doll. Woody’s sole means of defense is his pullstring, which he whips in all directions and also uses to swing about in order to negotiate wider expanses. I’m going to stop describing this as it sounds suspiciously like I’m describing some other part of Woody’s anatomy. The player is also given the opportunity to ride Rex, steer RC, and surf along on Roller Bob as you escape Sid’s house and try to avoid getting eaten by Scud.

The designers of this game were clearly intent on ensuring that the gamer got his or her money’s worth, as the number of levels in this game is impressive. Not only that, but many of the levels are complex and extensive. It’s interesting to note this in context to Toy Story the film. Revisiting the film recently, it struck me how intensely brisk it is paced. If the game and the film were identically paced, you’d been done playing in the time it takes to watch a single Pixar short. As arduous as this made completing the game, the volume and creativity of levels instantly upped the replay value.

Also benefiting the replay value is the ingenuity applied to prevent the gameplay from becoming stale. There are levels with specific missions—relayed to the player via Etch-a-Sketch... 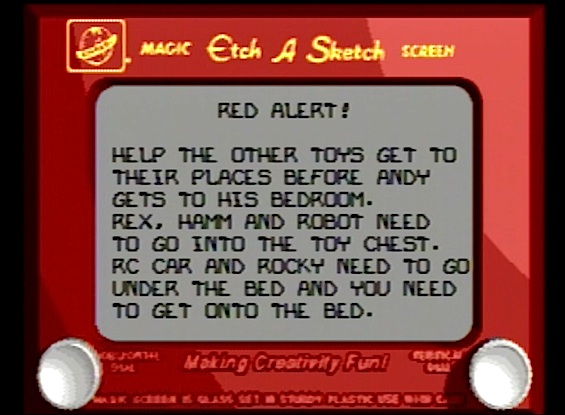 ...such as timed levels, driving levels, and levels featuring platform timing elements so complicated as to feel like elaborate puzzles, specifically the inside of The Claw machine. There are also levels that seem to wholesale lift gaming elements from other recognizable titles. The level wherein Woody must search the innards of The Claw machine to rescue wayward aliens uses almost the exact same engine as Castle Wolfenstein... 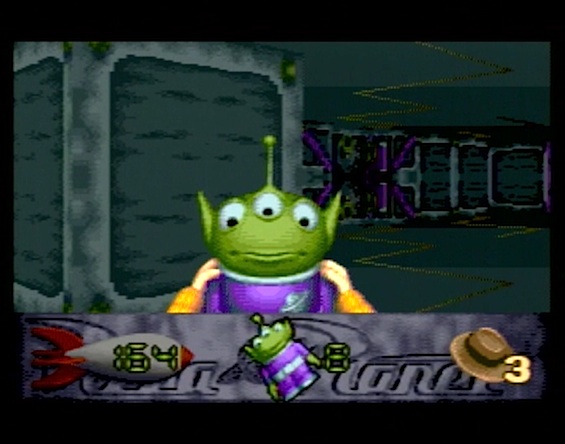 ...and the level that has the player racing back to Andy’s house on RC feels eerily reminiscent of Pole Position. 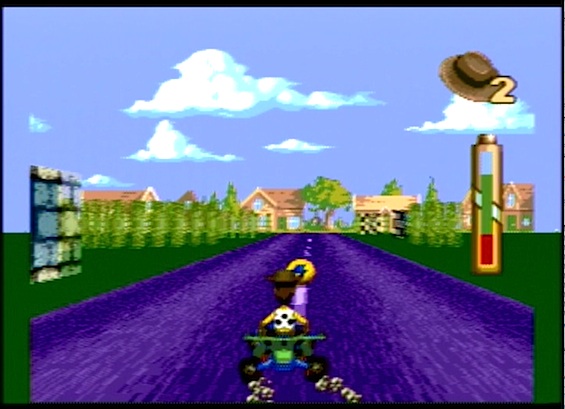 But this incorporation of other games was done so playfully and with its own flair, that it didn’t feel like they were ripping off either one; as opposed to last week’s Alien on Atari.

There is, however, a fundamental gameplay element that does bother me about Toy Story. In any given level, Woody’s pullstring will bind and restrain an enemy for a brief increment of time... 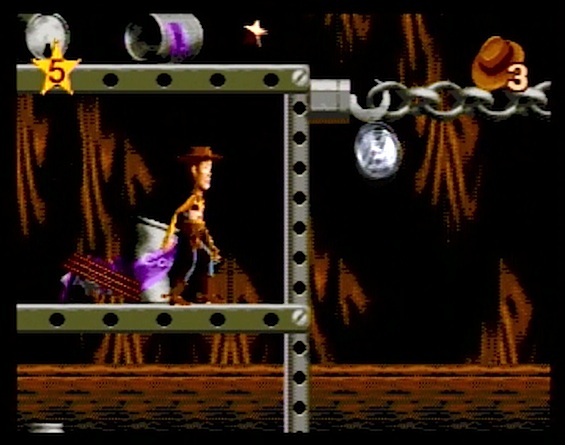 ...but will not actually destroy that enemy. This makes the game so much more difficult than it needs to be by injecting an additional obstacle and especially interfering with the player’s ability to create timing strategies. Part of me understands this and even applauds the designers for holding so true to the film. Since Woody is such a champion of the importance of toys in a child’s life, it makes sense that he wouldn’t actually destroy them. But for the love of Andy’s absentee father, why can’t they just fall over or something so as to be removed from the field of play? It also bugged me that Woody’s hit points did not reset from level to level.

As much as I loved this game as a kid, falling back into it was not the simple task Aladdin proved to be. Frankly, it got downright aggravating. The very first level paints this as a light, breezy game that is almost infantile in its ease. This delusion is quickly shattered as each level gets progressively more difficult and the lack of default continues becomes a hefty problem. I kept seeing the word “continue” in the lower right corner of every “level complete” screen... 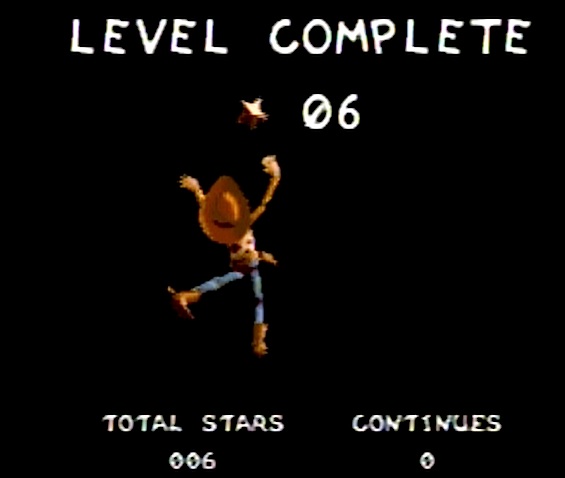 ...but never witnessed the counter just below those words rise above zero. As a result, I would continually get to certain point, exhaust all of my lives, and be hurtled back to the start of the game. It reminded me of playing Darkman as it became a race to make it back to the site of my defeat and hope I had enough lives and hit points in tow to propel me forward. Four hours later, I had reached my wit’s end and decided to consult the oracle that is the Internet.

As it turns out, there is an economy to this game that simultaneously exacerbates its difficulty and represents the only logistical method of beating it. Scattered throughout every level are tiny gold stars. What I regarded as trivial grabs for a higher score turned out to be a critical game factor. Getting all 50 stars in a given level will earn the player an extra life.  For every 200 total stars you collect, you will be given the opportunity to play a bonus games to earn extra hit points. Every 300 stars gathered will net you that coveted extra continue. The convenient thing about having to strive to collect stars in order to effectively maneuver through the game is that most of the levels do not carry a time limit and you can therefore engage in this star search to your heart’s content. There’s something about this demand of the gamer to amass gold that poetically speaks to Disney’s measure of human worth.

I am happy to report that I was in fact able to beat Toy Story. Even with the revelation about the value of the gold stars, it still took me several hours to accomplish this task. The two levels in Sid’s room were the most difficult. The sheer number of enemies and the incredibly complicated pull-string swinging strategies were absurd.

Faithful to its Source?

Sega’s Toy Story follows the movie to a tee, much like the Aladdin game. The story elements of the film that aren’t played out explicitly by the gamer are communicated via interstitial screen shots from the film itself. 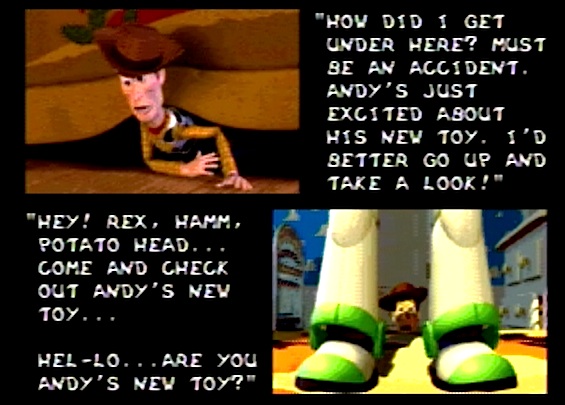 While there are a few levels that operate within the confines of the film’s plot while not necessarily within environments that were visible to the viewer, there is one such level that is wholly manufactured by the developers. This level is a dream sequence involving Woody being attacked by a giant Buzz... 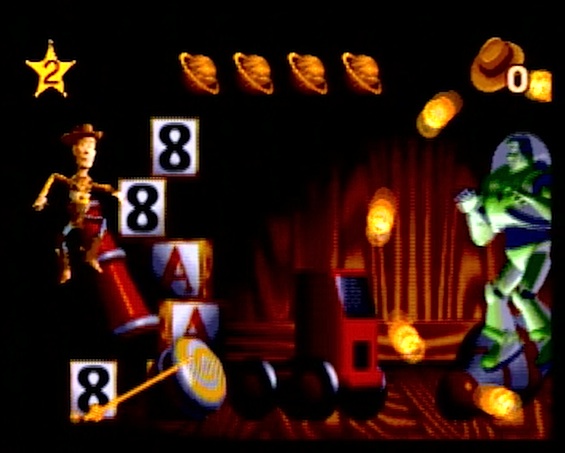 ...which also represents to the only actual boss in the game. This is an interesting deviation from the structure of most games. The game also features recognizable sound bites from the film as well as 16-bit versions of Randy Newman’s spectacular original songs.

But beyond recreating the film’s entire plot, there are so many little touches throughout the game that pay specific and endearing homage to the film. There is a particular moment in the first level that is so subtly engrained in the flow of the game that it would be easy to miss if you weren’t looking for it. As the troops parachute down from the top of the dresser, one of them suffers a malfunction with his chute and falls flat on the floor. He writhes there for a bit before one of the helicopters hovering through the room backs up and sends down a lifeline. It is reminiscent of the scene early in the film wherein Andy’s mom steps on an army guy and the sergeant, refusing to leave a man behind, goes back for him. I also enjoy the book on the shelf in Andy’s room labeled Tin Toy, a reference to Pixar’s first short as well as a carryover from the film. The iconic lamp and star-clad ball can also be observed. 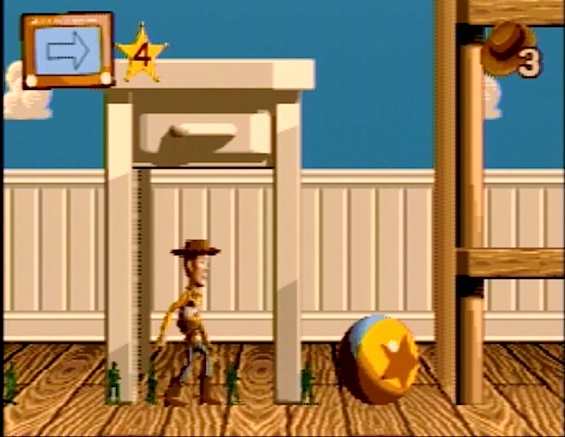 There are those who would argue that simply rehashing the plot of the film, almost exclusively, is a lazy method of game development. I can certainly agree to a certain extent, but not in the case of Disney games. So many of Disney’s greatest films are so excitingly adventure-based that they perfectly lend themselves to game adaptation. As a kid, even as a tween by the time Toy Story was released, I found myself watching Disney movies and imagining myself as the characters in the film; experiencing what they experienced and being heroes just as they were. Toy Story on Sega gave us the chance to fly with Buzz, to sneak into Pizza Planet disguised as fast food... 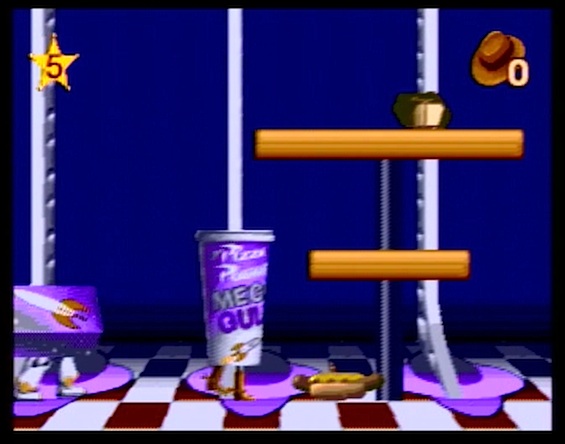 ...and to step into the boots of the dearly loved leader of Andy’s room.

It’s not as if you need search the most out-of-the-way pawn shops and roadside dirt malls to get your hands on some Toy Story merchandise. For a while, it seemed the Disney store at my local galleria was being kept solvent entirely by Woody and Buzz memorabilia and apparel. But I must say I am surprised to see a Toy Story Tree-Growing Kit sporting the image of one of the aliens from The Claw machine. I suppose the immediate association is the fact that the aliens were green and planting a tree represents adopting a green initiative, but to say it’s a loose association is to say Sid demonstrates serious warning signs of borderline personality disorder.