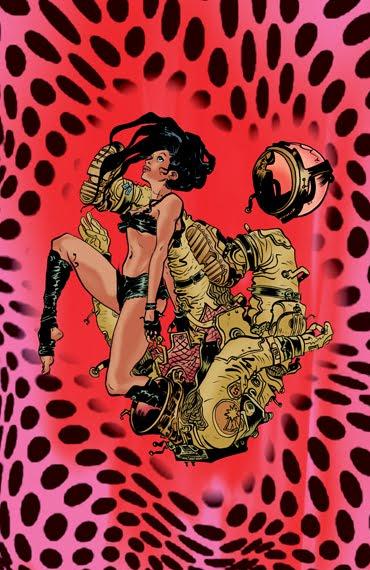 I know the story of STRANGE ADVENTURES started in the 1950s as a perfect complement the B-movie sci-fi that permeated every drive-in from New York to San Francisco. But this reimagining released this week from Vertigo reminds of another forgotten piece of nostalgia from the 1970’s, “Battle of the Network Stars.” In the days before the mass proliferation of cable, the Emmys and BotNS were the only way to see all of your television stars together in one place at one time. STRANGE ADVENTURES does the same thing by bringing together top talent like Jeff Lemire, Paul Cornell, Brian Azzarello and a host of others to deliver the best sci-fi I have read in years.

Pop culture has been in a science fiction drought the past few years. Battlestar broke our hearts, Star Trek it seems will never grace our television screens again and even though Scy-Fy rebranded themselves, the movies they put out are so horrific they would make Ed Wood sport wood even from the grave. STRANGE ADVENTURES, though, is a sci-fi salvation.

The book does so many things right: each story is quick and concise, with no more than a few pages in each vignette, though these stories feel more complete than the plethora of normal sized comics I review each week. STRANGE ADVENTURES also remembers that the best sci-fi is less about aliens and ray guns and more about highlighting the tragedy and triumph of the human condition in a strange fantastical setting.

The best thing at this point would be a rundown of the awesomeness inside in this hefty 80 page (AD FREE - WAHOO) floppy.

CASE 21: Writer – Selwyn Hinds, Artist - Denys Cowan A reflection of our current dependency on the world wide web and the indelible footprints of our lives in cyber space. 100 years past tomorrow, everyone (who is anyone) possess electronic laced tattoos that give us complete access to the “market.” With this privilege, though, comes the price of never having privacy. This is also a tale as old as the bible, when one sibling betrays another for their own personal gain.

THE WHITE ROOM: Writer – Talia Hershewe, Artist – Juan Bobillo Hershewe writes a wonderful cautionary tale that with greater bandwidth comes the inevitable further disconnection from our true selves. The White Rom is essentially the internet come alive, granting every single fantasy one could ever imagine. The ending of this was sweet and inspiring in that no matter how jacked in we become technology can never fully emulate the true human experience. As much as I enjoyed this story, the art is what truly blew me away. Bobillo dances inside a bleed of water colors, yet somehow still manages to highlight and accentuate the most important details of each panel.

PARTNERS: Writer – Peter Milligan, Artist – Sylvain Savoia More fi and less sci, PARTNERS looks at the life and times of two friends; one is imaginary, and one is not. Which is which? We don’t know and neither do the characters. This was a great concept brought to life by Savoia’s pencils.

ULTRA THE MULTI-ALIEN: Writer & Artist – Jeff Lemire Lemire is hands-down the best writer of tragic characters. He’s enamored me with this ability over the past few years on SWEET TOOTH and thankfully takes a similar approach with ULTRA. Basted in B-movie schlock, ULTRA is the story of a man who is fused with four aliens. Not only did Lemire do an amazing job of describing the agony and horror of this transformation in a moment-by-moment recap, he also deals with the repercussions of the event. Where does the man end and the aliens begin? The answer is not simple, but it is truly poetic.

REFUSE: Writer & Artist – Ross Campbell Hoarders are nasty. But you know what’s nastier when hoarding manifests itself in physical form. You just have to read this one to truly get it.

POST-MODERN PROMETHEUS: Writer & Artist – Kevin Colden Again, heart-wrenching. When a lab experiment gains sentience and then finds love with another likewise experiment, they escape their captors and set out to forge a normal life. Sadly, a normal life will never be in the cards when you are doomed to despise the very nature of your being.

SAUCER COUNTRY: Writer – Paul Cornell, Artist – Goran Sudzuka In what seems like a simple straight-forward story about a man who encounters aliens from Venus and has fantastical adventures with them, Cornell pulls the wools over our eyes at the last minute to show us we really don’t know anything about this man, his story or ourselves.

SPACEMAN: Writer – Brian Azzarello, Artist – Eduardo Risso What happens when genetically engineered humans made specifically to withstand the harsh realities of deep space exploration never get to see the other side of the ozone layer? We get a taste for the answer in this tale, but I think Azarello is holding back the true goodies for the on-going series.

STRANGE ADVENTURES tweaked both side of my geekdom. Not only is it the best damn sci-fi anthology to come along in years, these nine stories are simply comic craftsmanship at its finest. 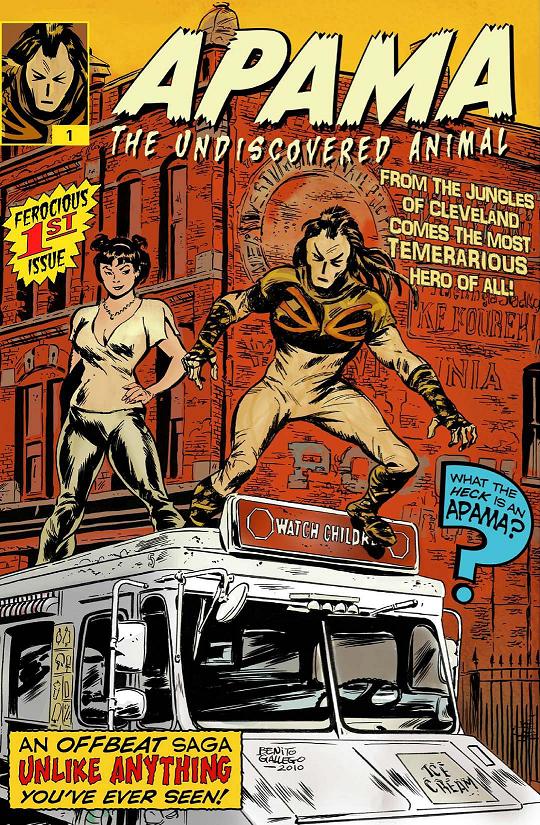 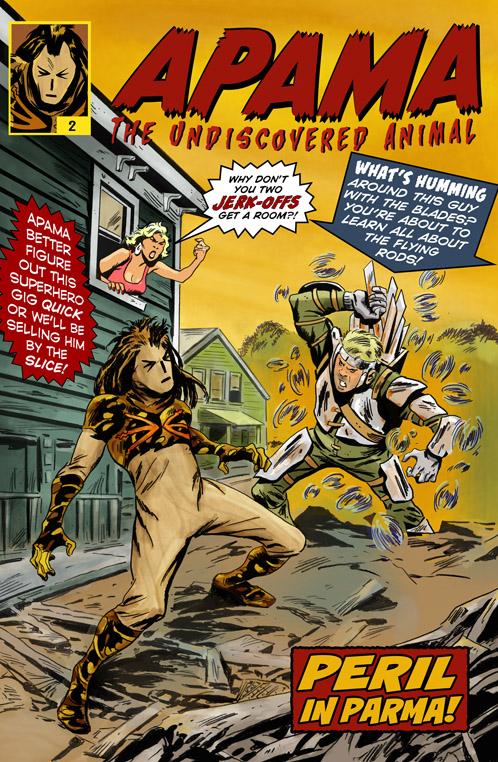 Apparently there was a small indie film called "Hero Tomorrow" and within the film one of the characters was trying to publish a comic book called APAMA. This is the comic that he would have been publishing. It is a full-on carbon copy of the look of your standard Bronze-Age Marvel Ccmic right down to it looking like it was drawn by John Buscema himself. The content is a bit more adult than your average Marvel Comic circa 1978, but the look of it is spot on. However, this is a web-only endeavor. The guys at Swinging Cane Productions have created a comic that perfectly blends the experience of reading an old-style Marvel comic with the digital age, replete with embedded video and mp3s within the comic. They include letters pages, bios of the creators, some pin-ups from artists like Mark Wheatley and Ron Frenz and even a surprise appearance from "The Flaming Carrot".