Lasers, Bombs, SUVs On The Moon, Space Excursion Vehicles, Massimino In A Jet, The Fabulous Sigrid Close, And More!! Copernicus Tells Us About This Thursday's KNOWN UNIVERSE (Nat Geo Channel)!!

Some of the talkbackers fell in love with my red-headed cohost, and Stanford professor Sigrid Close. Sigrid herself even waded into the melange of disdain, ignorance, fleeting praise, name-calling, and crass buffoonery that is AICN talkbacks.  She, of course, classed up the joint. Here is a video clip Stanford released last week highlighting Sigrid’s participation in the show. It features the gun in space segment I mention below.

The title of this episode as it was pitched and written was SPACE TRANSFORMERS.  The idea is to look at how we have to transform our technology on Earth so that we can use it in space. But I think for legal reasons (or fear of such things) they had to take Transformers out of the title.

This is the week of the great road race of interplanetary significance! The course:  rugged simulated lunar and Martian terrain at Johnson Space Center. Representing Earth: me in an SUV. And representing extraterrestrial drivers everywhere: Mike Massimino in NASA’s SEV (Space Excursion Vehicle). The SEV is essentially a space concept car. It has next-generation technology that NASA could use on the moon or Mars. This thing is so cool! 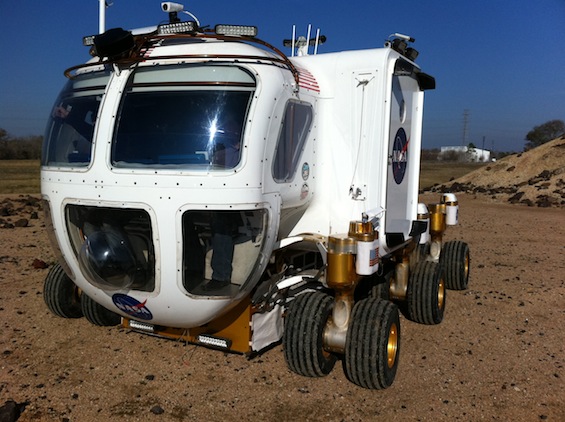 Each pair of wheels can pivot independently. And they can move up and down independently. This allows it to spin in place or navigate rough terrain or boulders.  It can even drive up a 40 degree incline. You drive it with a joystick computer interface, and cameras.

But that’s not the coolest part. The cabin is pressurized! That allows astronauts to be able to work in comfort without a space suit. It has sleeping quarters and a toilet, and can support a crew of two for two weeks. If you want to check out the terrain without putting on your space suit, there’s a bubble in front that you can stick your head in. Here’s Mike doing just that. 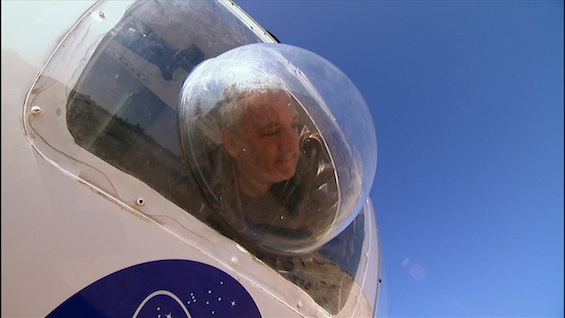 If you find something you want to investigate, you just step through the airlock right into your space suit! They would be attached to the back doors you see below.


Within minutes, you could be exploring the surface. 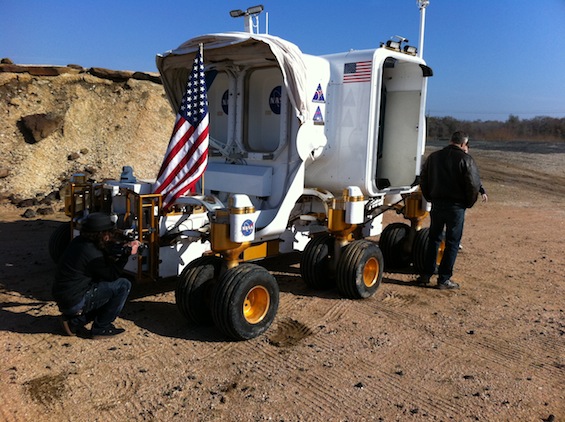 But say you want to go explore a bit farther afield. It would suck to have to get out of your space suit and get back in. But you don’t have to. In the close up of the back deck: 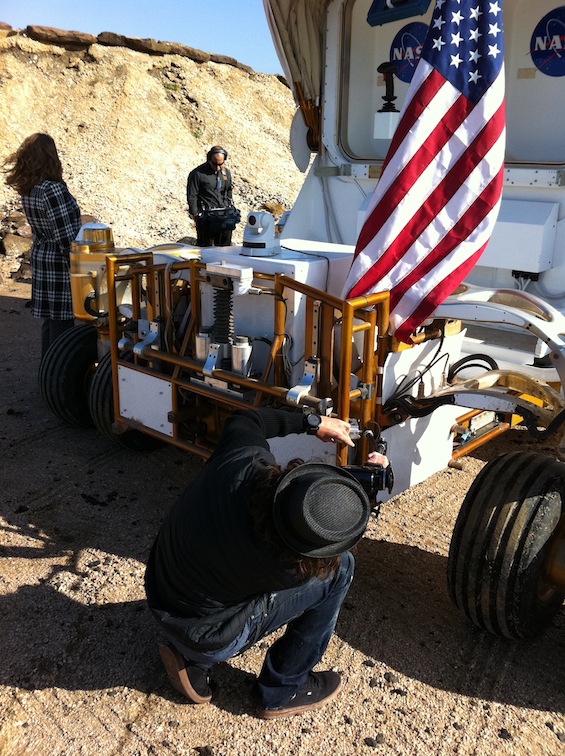 …you see a joystick (to the left of the flag). You can sit on the back and drive it from there, like an interplanetary stagecoach! You can actually even take the cabin off and drive around from here with just the chassis. That’s right, saucer separation!  This thing is a friggin space ship!

Man, I wanted to drive the space ship! I deserve the electric vehicle and Mike should drive the gas guzzling SUV. After all, in real life I drive a hybrid car, and Mike drives, what – a Space Shuttle! That thing sucks so much gas they have to take a disposable gas tank. I had to console myself by sitting in the cabin pre-race, growling like Chewie getting ready to activate the hyperdrive. Astronauts get to have all the fun. I’m like the Michael Collins of this segment.

Instead of a cool space car, I had to drive an SUV. Actually, just getting that lined up was easier said than done. The plan was for me to rent an SUV from the airport, take out all the insurance, and we’d use that one for the show. One of the show’s administrative assistants reserved one from the rental car agency. But when I got there, it turns out that you can’t reserve a particular model, only a class of car.  Wouldn’t you know it, they had no SUVs. The agent said, “Oh but we have this nice minivan!” Now there is no way I’m showing up to a gunfight with a knife. I didn’t want to tell him we intended to rag out his SUV on national television. I just told him that there was no way I was driving a minivan, I absolutely had to have an SUV.  After a bit of hunting and calling around, he finally found one.

Here’s the picture I took with my cell phone and MMSed to the field producer to make sure it would work: 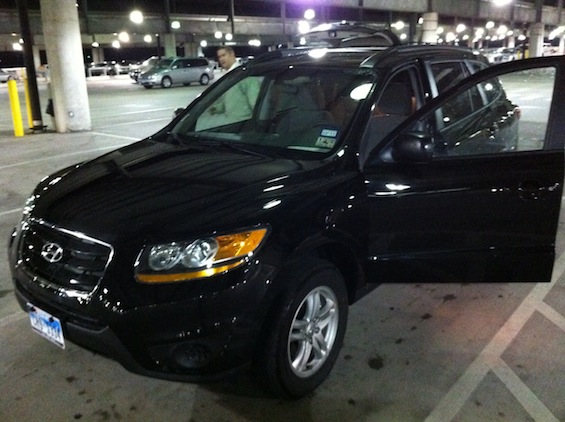 It is funny that my choice of SUV dictated what the animators eventually had to animate. To illustrate that you can’t just take an SUV to the moon, they actually animated my SUV on the moon. 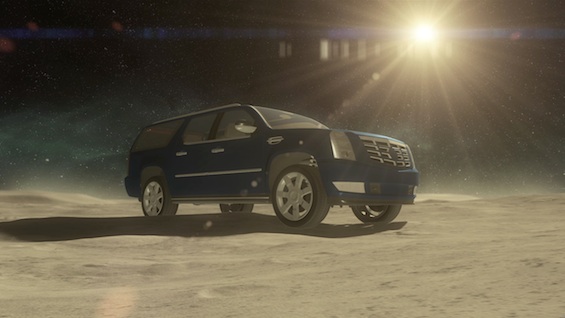 With Mike in his SEV, and me in my SUV, finally Mike and I lined up at the starting line: 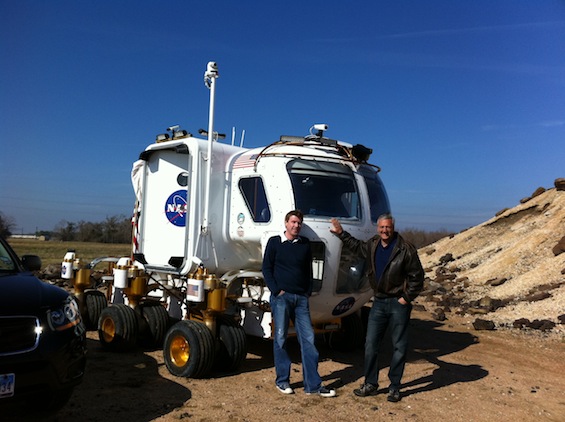 Standing in front of the vehicles like that, we filmed a few “hero shots” – you know, low level, looking up at you with a pan up or a zoom in. Maybe you cross your arms. It always feels so silly to do, but it is kind of awesome too.

But before the race could get started, it was time for some verbal throw down!  In reality, I knew I was being set up for failure. The point of the segment is that you have to transform Earth-bound vehicles into something like the SEV to work in space.  But I still trash-talked Mike like I was going to roll all over him. This must be what the bad guy professional wrestlers feel like.  Actually, that was a hell of a lot of fun. That’s why I’m usually laughing before the race whenever they cut to me.  At first I filmed a few improvised lines. Then they filmed Mike doing his lines. I couldn’t hear it, but I just saw the sound guy and the director cracking up. They told me what he had improvised, so I asked to do some more lines so I could bring my A- game smack talk.

Now how do you film such an epic battle of nerd driving? We had two camera men set up at different locations. And they tricked out both vehicles with portable HD cameras all over the place. We had rearview-mirror cameras to get our reactions, side-view cameras, bumper cams, and even an SEV wheel camera. We covered the hell out of this thing. Even then we had to run the race several times, with cameramen in different places, to make sure we got all the shots. Some of the time we’d do it in pieces just to get a shot – like the takeoff from the starting line, or me trying to get out of a crater. But my SUV really did have trouble getting up that hill, and getting out of the crater. And we really did run through the race completely once or twice, and Mike really did win.

In the end, I think it is my favorite segment on the whole series. It takes up about the first 10 minutes of the episode. I don’t have a clip of it, but you can see a few bits from it in the trailer I posted with the first week’s article.

And in a bittersweet space rover coda, yesterday NASA finally gave up the Martian rover Spirit for dead. I’m not a space rover, but I play one on TV. I feel a special kinship for you, little dude. Good work on Mars. Luckily, rover twin Opportunity is still going strong.

MIKE MASSIMINO IS A TOTAL BADASS

Just look at this: 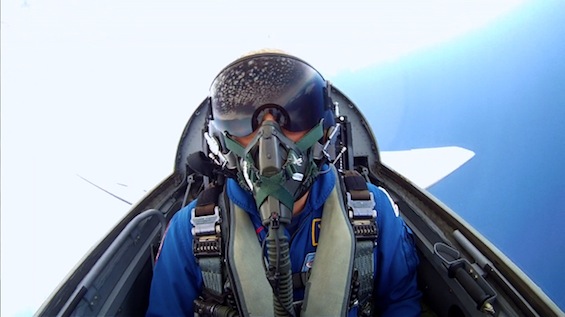 Yes he flies a plane in this episode. Or at least he co-pilots one. After all, he did have to deliver lines at the same time. Acting and flying can be dangerous! The point of this segment is to establish how planes work to show how that technology has to transform for space.

We put old-school Megatron in a box, and sucked all the air out. Seriously, we wanted to see if a gun would fire in space, so we put one in a vacuum and built a firing apparatus. Will it work? After all, a gun is a combustion process – it requires oxygen. Sigrid and I both knew the answer ahead of time, but to make it fun for TV we each took the opposite side for our pre-experiment banter. I even worked ARMAGEDDON (the worst movie ever made by my metric of wretchedness X total audience) into my analysis. 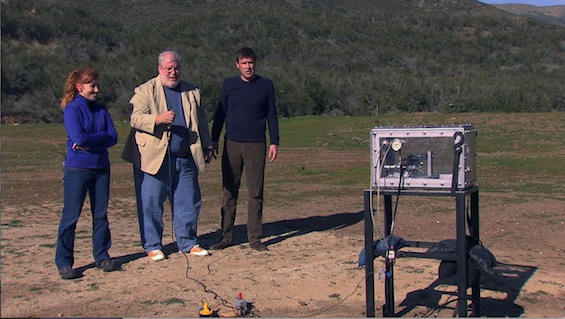 I won’t tell you the answer. Watch the show! Incidentally, I look terrible during this segment. I got very sick the night before, didn’t sleep, and my face broke out all over the place. I expected not to go on camera, but they put some serious makeup on me and threw me out there anyway! Mercifully, the segment is short and between some judicious editing and all the camera movement, I don’t look quite as bad as I felt.

As punishment for being so awesome, and to make him look as bad as I felt, we put Mike in the Orb of Chaos! 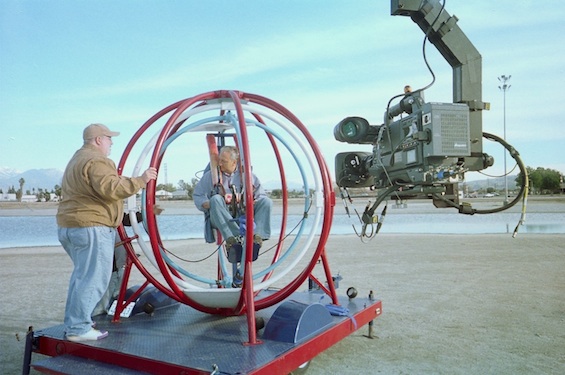 Jake got to spin Mike in 3 dimensions, and Mike had to fire thrusters to see if he could right himself while spinning uncontrollably. Of course he did it every time.  He’s too good at it! That’s just bad TV, Mike! Never send an astronaut when you want something screwed up. Astronauts and all their training!

Two more fun things about this episode: (1) lasers, and (2) lasers. Look at what David Kaplan did to this can using one of the Army’s lasers: 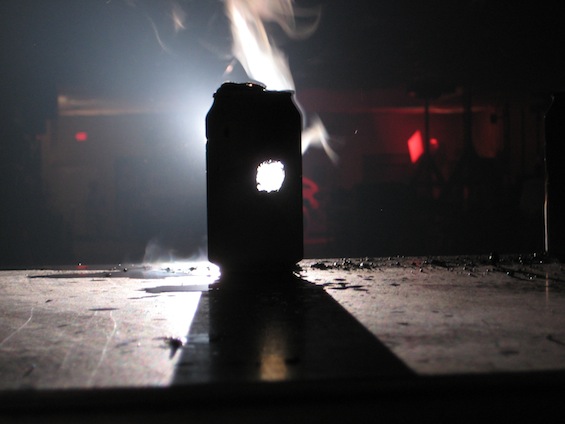 He then got to go out and use a Hummer-mounted laser to blow up some bombs. 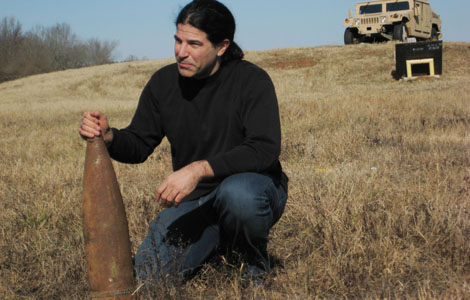 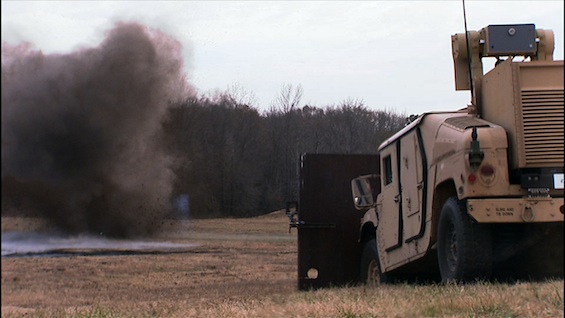 That was to show how you can deliver a large amount of power to a small spot using a laser. Lasers could eventually be used to provide long-distance power to spaceships.

And if that wasn’t enough, we also fire a rail gun!

I think this is a fun episode. We’re all having a great time and you can tell. Check it out at 9 Eastern Thursday on NatGeo (on at 6 and 9 on the West coast).