Copernicus Tells Us About 'Most Powerful Stars,' Thursday's Episode Of KNOWN UNIVERSE!!


This week on Known Universe – Episode 303: Most Powerful Stars.  As always, it premieres Thursday at 9 Eastern on the National Geographic Channel.

While the fist episode focused on Surviving Outer Space, and the second, Treasure Hunt focused on a hybrid of how Earth treasure is created and what becomes valuable in space travel, this is the first full-on astronomy episode.  As I result, it is one of the ones I had the biggest role in helping to shape.  First I’ll explain what this episode is about, but after that, as a case study I’ll go in depth on one CG animated segment to show just what is involved in bringing the show together.

In this episode we examine some of the most powerful stars in the galaxy.  We end up covering how some of them end their life in massive explosions, and how some end up shooting out what amount to death rays – powerful beams of gamma radiation.  Some of the most massive stars are so powerful that they are dangerous to be around, even while they are still living.  But before we go to the extremes, to give ourselves some context, we start with experiments demonstrating the power of the Sun.

MELTING STUFF WITH THE SUN

If you’re a curious pyromaniac like me, you’ve probably burned all kinds of things by focusing the Sun’s rays with a magnifying glass.   As always on this show, we like to take fun experiments and scale them up as huge as we can.  So in this episode we burn things with a solar furnace! 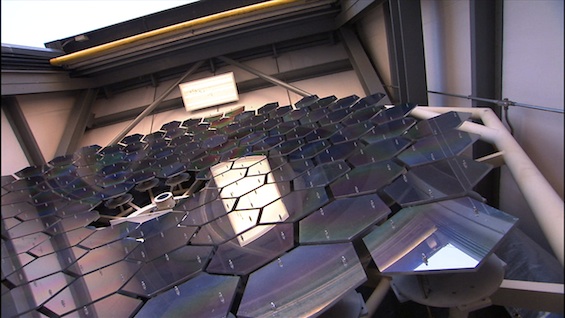 That’s a giant set of mirrors that can focus the sun’s rays at a point.  David Kaplan, one of our hosts got to try putting various materials, including different metals and even a laptop at the focus and seeing what he could burn through.  He’s the one on the right here: 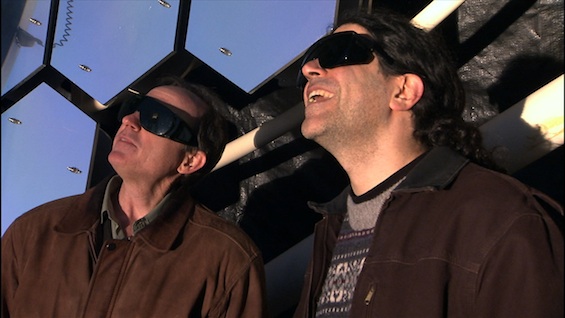 
I mentioned in an earlier article that Stanford aerospace engineer joined the show late.  But she finally gets into the demo act this week by lighting a fire using only pressure.  She put some paper in the bottom of a tube, then jumped down on it, causing a rapid pressure and temperature increase, igniting the paper.  She got a quite a kickback from that thing. 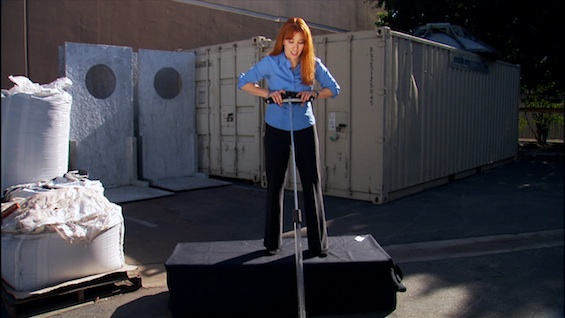 MAGNETS - HOW DO THEY WORK!

Later in the show Sigrid and Steve “Jake” Jacobs go all Insane Clown Posse on some magnets.  They try to pull a huge neodymium magnet away from a piece of metal.  Those ropes are attached first to beefy men, and then to trucks! 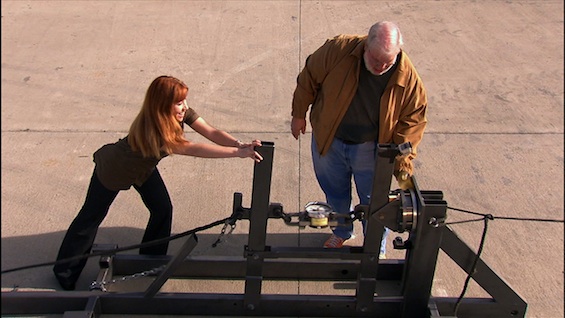 As powerful as that is, this technological terror is insignificant next to the power of a magnetar.  We look at what would happen if a one of these neutron stars with an immense magnetic field came close to the Earth.  Much nastiness is what would happen.

A SUPERNOVA IN L.A.

Meanwhile, this is the week where I blow stuff up real good.  I got to simulate a supernova, Michael Bay style!  I already set this up in the first article I wrote about the show.  But here are a couple more new images.  First, look at the glee on my face when I have a detonator in my hand. 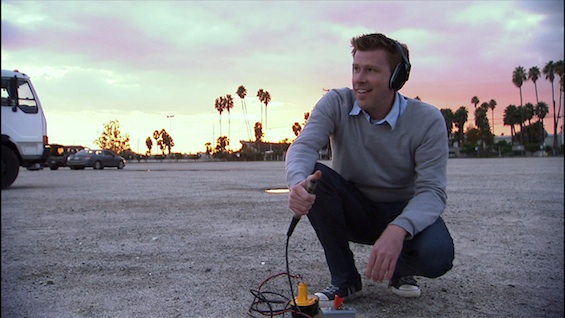 And a six-foot diameter acetylene-filled weather balloon with its insides being rearranged explosively is an awesome sight: 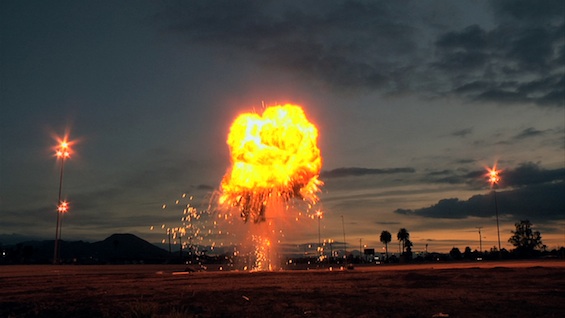 And here is a shortened version of the segment from the show:

Finally, as promised, I’ll finish the article with a look at how one of the segments came to be, nitty-gritty details and all.

The script (written before I got on the show) called for trying to illustrate the immense temperatures at the core of the sun by imagining what would happen if you put a piece of it in downtown Los Angeles.  So the producers asked me how big of a piece you’d need to wipe out all of LA.  This isn’t something you can just look up, so I started to do some calculations.

Here’s the email I sent to the producers:

The calculations below carry some huge caveats and assumptions.  I encourage you to have someone explaining some of that in a voiceover, or a talking head.

It is interesting because the fusion output from that amount of solar core [one about the size of a suitcase] is not large at all -- about the same as a light bulb -- the sun gets its enormous power from the huge mass of material it has.  The destructive power comes from the high temperature.  That comes from this stuff being under so much pressure, being at the center of the Sun.

The flux of radiation would be:

But something similar has been done -- the dropping of the atomic bombs on Japan.  Temperatures in nuclear explosions reach tens of millions of degrees. They heat the air to thousands of degrees.  Nagasaki is not a great case, because the hills blocked some of the blast, but Hiroshima should be instructive.  The energy release was 54 x 10^12J.  A few square kilometers were totally incinerated, and about 12 sq. km destroyed.  Some of the damage was due to the blast, but more than half was due to the high temperatures involved (and actually the shock wave was due to superheated air).

But does it?  No, a piece of the core of the sun would explode immediately if you put it in downtown LA, because the core of the sun is so much more dense than air.  But we've got a lot of room to play with here -- it would only have to stay together for 5 x 10^16 / 3 x 10^22 = about a millionth of a second.  This is roughly the timescale of a fission chain in a nuclear explosion, so it is sensible that this thing wouldn't dissipate any faster.  So it would work!  Doesn't matter if we started with something larger than a suitcase – a suitcase ought to do it.

My conclusion is that a piece of the core of the sun the size of a suitcase would look a hell of a lot like an atomic bomb explosion and kill everyone in a 100 km, or about 60 mile radius around LA.  Of course there might be all kinds of things I didn't think of.  But I think that is about as accurate as we can get for such a hypothetical situation.


As you can see, a lot of research and work went into that calculation.   Months went by, and the next I heard was that the producers wanted to run the proposed voiceover by me.  Here it was:

WHAT WOULD HAPPEN IF SOME OF THAT VIOLENCE WERE TRANSPORTED TO EARTH?

IF WE CRACKED THE SUN OPEN AND TOOK OUT A CHUNK OF THE CORE, A 25-MILLION DEGREE FAHRENHEIT PIECE JUST THE SIZE OF A SMALL SUITCASE, IT WOULD OBLITERATE A MAJOR CITY LIKE LOS ANGELES FROM THE INSIDE OUT.  FIRST, THERE WOULD BE AN IMMEDIATE FIREBALL…VAPORIZING EVERY CAR, BUILDING AND TREE AROUND IT…  NEXT, EVERYTHING WITHIN 90 MILES, FROM THE GROUND TO THE AIR, WOULD CATCH FIRE…  AND FINALLY, IN JUST A FEW SECONDS, THE ENTIRE CITY WOULD BE WIPED OFF THE MAP.


I don’t like that for all kinds of reasons.  It sounds over-dramatic and empty because it is so imprecise.  How are you cracking open the sun?  What does vaporizing mean?  Not everything would be ‘vaporized’ anyway.  So I proposed this:

WHAT WOULD HAPPEN IF WE TOOK A CHUCK OF THE CORE OF THE SUN THE SIZE OF A SUITCASE AND PUT IT IN DOWNTOWN LOS ANGELES?  THE RESULT WOULD BE LIKE AN ATOMIC BOMB FAR MORE POWERFUL THAN THOSE DROPPED ON JAPAN -- IT WOULD OBLITERATE THE CITY.

THE 25 MILLION DEGREE MATERIAL WOULD SUPER-HEAT THE AIR, CAUSING A FIREBALL AND A SHOCK WAVE THAT DESTROYS EVERYTHING, EVEN BUILDINGS, FOR MILES.

BEYOND THAT, HIGH TEMPERATURES AND FLYING DEBRIS CAUSE NEARLY EVERYTHING TO CATCH FIRE.

THE RESULTING DESTRUCTION AND FIRESTORM WOULD DOOM ANYONE WITHIN A 60 MILE RADIUS.

The final version used in the show is something close to that.  But that’s not the whole story.  It wasn’t until later that I got to see the animation that goes along with the voiceover.  Somewhere, someone had decided to make it more dramatic by showing a piece of the sun ripping out of the sun, then smashing into the Earth like a meteor.  The problem is, that isn’t what I calculated.  How does it stay together like that?  We argued about that for a bit, but then I decided that this requires magic no matter what – magic to keep the core of the sun together for a trip to Earth, or magic to teleport it here, so what does it matter?  The result is the same either way, so I said ok to that bit of dramatic license.  At the end of the segment we state very clearly that this could never happen in real life.   In the end the basic point was achieved – to dramatically illustrate the power of the sun by “bringing it down to Earth.”

The origin of this segment illustrates a few things about the show.  First, we’re often dealing with crazy scenarios that you can’t just look up.  These require a lot of thinking and calculation.  Second, there is some natural tension between me wanting to be precise (but possibly at the risk of over-explaining) and the writers, producers, and show-runners, who want to make things as dramatic and simple as possible (at the risk of being overly dramatic or unclear).  Then finally there are the animators.  They do a great job of rendering things as-storyboarded.  But they don’t know everything that has been discussed about a segment, and sometimes they have to just make a decision about how something will look.  This can require multiple passes to get things right.  The whole process requires a lot of feedback and communication.

But the biggest point of this anecdote is that what goes by in about a minute on TV actually took months of work by dozens of people.  You see the hosts as the “face” of the show, but it is really the work of writers, editors, producers, animators, camera operators, sound editors, special effects people, hosts, scientific consultants, executives, promoters, accountants, production assistants, and more.

I was also asked what would happen if we replace the sun a blue supergiant like Rigel (the brightest star in Orion).  Rigel is so powerful that the result would be utter devastation for the planets, but some would go quicker than others.  What would happen and how long would it take?  That took a lot of calculation too -- you figure out the temperature at each planet, determine how that affects the motion of different atoms and molecules in the atmosphere, and compare the gas velocity to the escape velocity.   I’ll spare you the calculation, but check out the show to see how it turned out.