Why real stunts are better than CG! Vic Armstrong tells Quint about his approach to The Amazing Spider-Man!

Ahoy, squirts! Quint here with a bit of a preview of a much longer interview coming up later this week (hopefully) with stuntman extraordinaire Vic Armstrong.

In the full interview I talked at length with him about his career, from You Only Live Twice to Legend and more, but we have a nice little chat about his most current job: stunt coordinator and second unit director on The Amazing Spider-Man. He talks a lot about how different the action is going to be in the reboot, how there was a big push from Marc Webb and Armstrong from the get-go that they were going to rely as much on real webswinging as they can.

Now, I know in the Sam Raimi movies they had some amazing stunt guys doing real in-air swinging, but for whatever reason they used more and more digital stunt guys throughout the series. So, who knows what we’ll actually see on the screen, but I love that the mindset is that the more practical they approach this, the more real it’s going to feel.

So, here’s a little snippet of the interview, focusing on The Amazing Spider-Man. Consider it a tease for the full interview to come that will shed some light on the approach to the new Spidey flick.

Quint: Do you think with the recent massive success of Fast Five, a film whose whole marketing campaign revolved around big, real stunts, that studios might turn away from their more CG-intensive stuntwork?

Vic Armstrong: I think that started already. The last few films I’ve been involved with, Green Hornet, Thor and now Spider-Man, the first thing said when we go into meetings is “We want make this as real as possible. We don’t want it to look like a CG fest,” etc, etc.

We spent weeks and weeks on Spider-Man getting Andrew Garfield and the stunt doubles to fly for real rather than just having cartoon characters whizzing around the screen. There’s some great stuff on YouTube of Spider-Man flying down 12th Ave. underneath this big, gothic archway, viaduct.

There’s a whole resurgence in doing things for real, which is how we like to do it. I’m not kidding people… we don’t cheat, but we don’t do things for real in the movie business. You don’t jump off a hundred foot building, land and walk away from it, but we can make it appear that you can. We’ve always used different tricks in the past, whether it be a stuntman landing on boxes and, with clever editing, you cut and see him land on the road. Things like that. To me, that’s no different to using CG in a movie to take out a pipe-ramp or to take out an airbag that you’re falling towards.

Quint: With the advent of DVD and the easy access to behind the scenes material on TV, DVD, books, etc, I think the average movie-goer is more aware of what’s going on behind the curtain than they used to. Using a combination of CG and real effects or stunt work makes it harder for the audience to spot the gag.

Vic Armstrong: Absolutely. When we did the last big of flying down in New York… We had fifty cars as he’d be flying above, swinging through as they’re driving up and down the road. Even the people in the cars who have seen it two or three times, you could see them looking out the windshields going “Whoooaaaa!”

When Spider-Man swings from one direction, then turns to swing another direction he’s pulling at 2 to 2 ½ Gs. That’s a lot of pressure on his body, but you see that on the body. You see the arms straightening out, you see the legs straightening out and then he pulls them back up as he then goes back up into his flying position.

You sense, subconsciously, the realism. You know. The eye and the brain is a funny thing. You only need something slightly off kilter for you to say, “Oh! Alarm-alarm-alarm! Something’s not right!” If somebody has one eye a quarter-inch higher, it’s not a lot, but straightaway the whole thing is out of balance and you see that in CG. When you see somebody swinging for real, then you look at the CG version your computer brain instantly tells you which is which.

Quint: Are you wrapped on The Amazing Spider-Man?

Vic Armstrong: I wrapped on Friday, yes. I’m going home to do a little publicity for the book, play a little golf and then I’ll be back!

Quint: How was that experience overall? Did you find it rewarding? From the man-on-the-street pictures and videos that have been coming out it looks really sharp from my perspective.

Vic Armstrong: I’m very, very happy with it. We did everything we set out to do and that’s all you can ever hope for. I’m very, very pleased with what we attempted and what we achieved. I really think it’s going to be a good movie.

It is a reboot. They don’t like to call it that, but it is a reboot. We went in at ground level and just changed everything; changed the actor, changed his approach to it and got some great, realistic modern parkour, skateboarding, flying… everything in it. 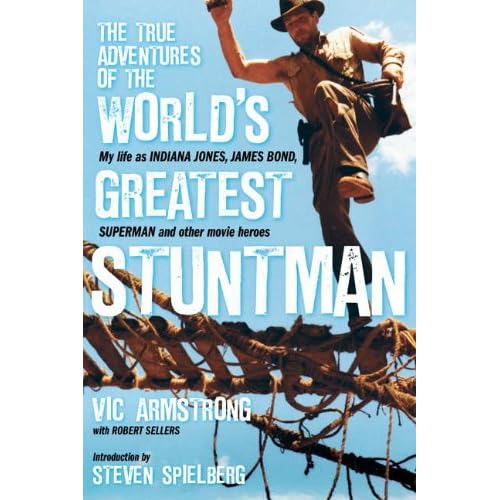 Armstrong’s a fascinating guy and a straight shooter. His book is fantastic. I love that he’s bringing his full talent and energy to films like Spider-Man, keeping the stuntman tradition alive and well.

Stay tuned for the full interview! We talk Robert Shaw, Tim Curry, Oliver Reed, Harrison Ford, Raiders of the Lost Ark, Temple of Doom, Gilliam’s Brazil, the evolution of Bond from the Connery days to modern day and much more!