AICN's Copernicus - aka Andy Howell - Is A Host On KNOWN UNIVERSE, Which Premieres Tonight (Thursday) On Nat Geo Channel!!

on The National Geographic Channel

I’m somewhere east of LA, squatting in the middle of nowhere, with a detonator in my hand.  It is hooked up to a homemade bomb – a 6 foot diameter balloon, filled with acetylene and oxygen – the same stuff they use in welding torches. 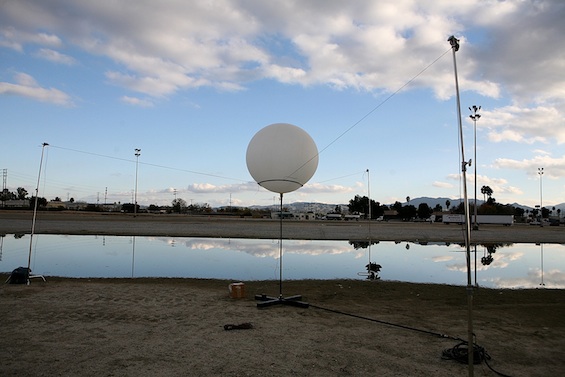 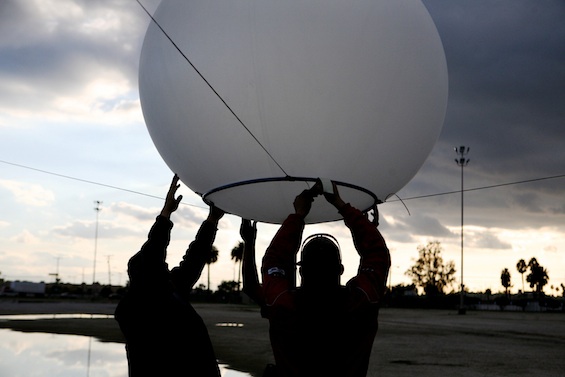 Steve “Jake” Jacobs, the most recent incarnation of Mr. Wizard, who masterminds some of the demos on MYTHBUSTERS, says, “I’ve seen this kind of explosion before.  I’m going to be standing about 40 feet back that way.  It was nice knowing you, Andy.”  “Wait!”  I say, “Is this safe?”  There is a cameraman filming my reaction to the explosion, so both of us have to be a lot closer than I’d like to be.  I try to reassure myself that the effects guy who set this up also works for Michael Bay.  He just got off Transformers 3.  Surely he knows his explosions.

I arm the switch.  Someone shouts, “Fire in the hole!”  Cameras roll.  I improvise a line, push the trigger, and….

Nothing happens.  I shout, “Nothing happened!” over in the direction of where everyone is hiding.  The effects guy comes over, and gingerly makes his way up the detonator cord towards where the bomb is.  He finds a spot where two wires have come apart, probably because we were trying to move the detonator as far back as we could.  He twists the wires back together and goes back to a safe distance.

We get reset and cameras roll.  I say, “I get to light my own supernova!” push the detonator, and…

BOOM! A massive explosion almost knocks me off my feet.  I actually do stumble backwards to catch my footing.  The cameraman, supposed to be silent, shouts, “OH MY GOD!”  People are just freaking out at the power of the explosion.  One of the production assistants shouts, “HOLEE MOTHER!” and comes running over cackling.  But cameras are still rolling, catching my reaction, so the show runner is waving his hands trying to quiet everyone else down.  After we finish the take, we get phone calls from people on another shoot more than a mile away, wanting to know if we are ok.  A fire engine shows up.  We get on the walkie talkie and ask the guys in the crane if the high speed footage came out ok.  Nope, they say, it was too powerful – the camera was whited out.  Dammit, we’re going to have to do it again, and in a hurry -- we’re rapidly losing the light.

Only time for one more setup before nightfall.  But we got it set up, and nailed it.  Just check out the beauty of this STAR WARS-worthy explosion! 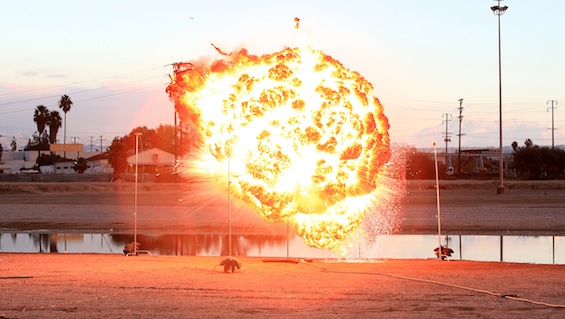 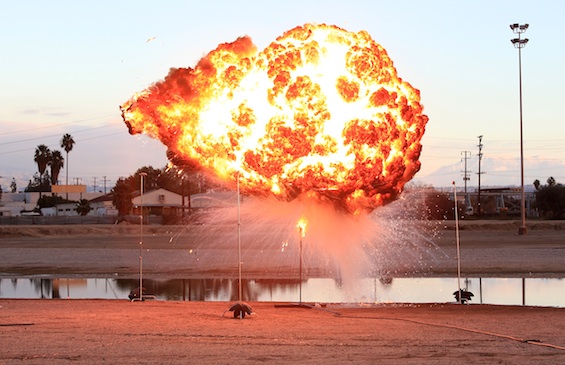 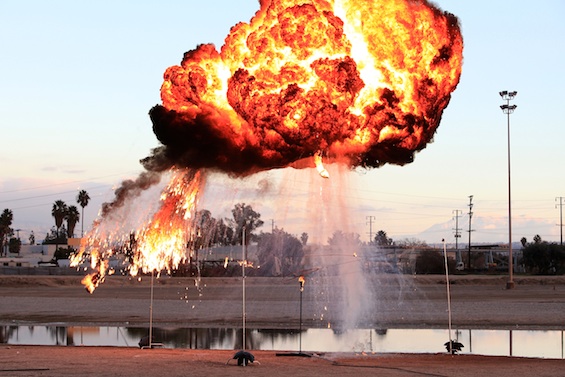 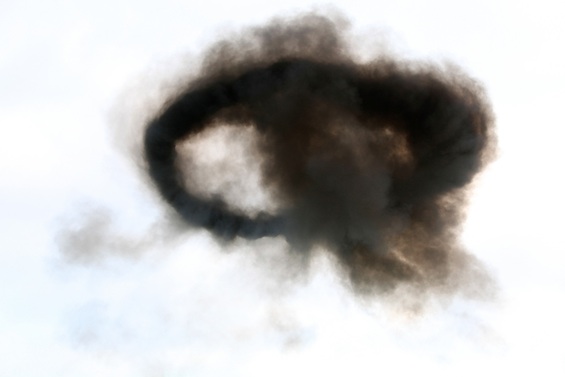 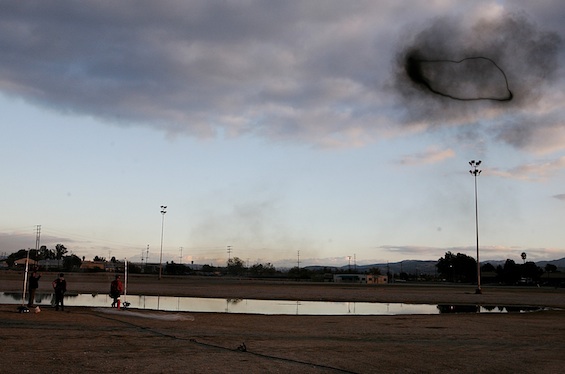 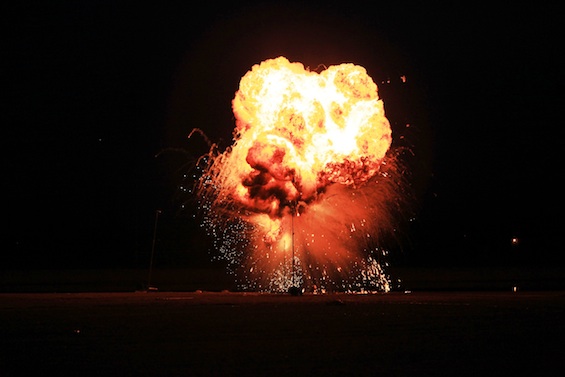 How did I get myself into the middle of such awesomeness?  I’m not even sure myself.  Back in November I got word that the show KNOWN UNIVERSE was reinventing itself for its third season.  They were adding hosts and lots of real-world demonstrations to explain astronomy and space science concepts.  They had a casting call, looking for professional astronomers, so I sent in my information.  After being contacted by a producer, and couple of audition videos later, I found myself cast as one of four hosts.  The others are NASA astronaut and Hubble repairman Mike Massimino, Stanford aerospace engineer Sigrid Close, and Johns Hopkins theoretical physicist David Kaplan.  Helping us design and explain our demos, is the aforementioned Mr. Wizard, Steve “Jake” Jacobs.  Our job would be to conduct demonstrations of scientific principles, do green screen interviews discussing the science, and interview scientists and engineers at facilities where we would be shooting.   With the exception of Sigrid, who came late, all of us are in all 8 episodes of the 3rd season. 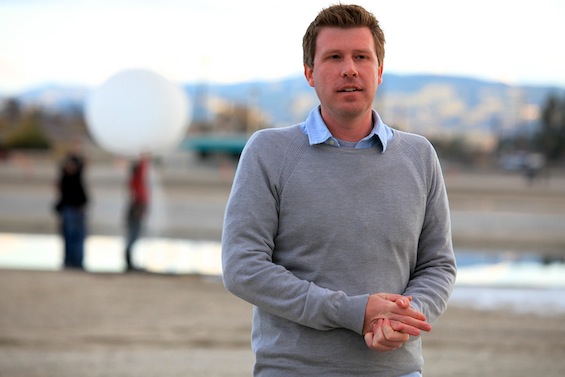 Why were we setting off explosions outside of LA?  Well, the main focus of my research is supernovae.  So when the producers of the show asked me if I wanted to have a special effects crew rig up a series of explosions, film them with high speed cameras, and have me compare them to supernova models, my reaction went something like, “Hell yes!”

Supernovae just appear as points of light, even when seen with the most powerful telescopes.  We can’t resolve the details of the explosion itself because they are so far away.  So we have to rely on computer simulations.  The old simulations were one dimensional, so they assumed the explosion was spherically symmetric.  But research I did for my PhD thesis showed that supernovae are actually not spherically symmetric at all.  As the explosion footage shows, real explosions are never perfectly symmetric.  Computers are just now getting fast enough to be able to simulate a supernova in 3d, and we are finding that their 3d nature really matters.  So in the show we compare our explosion footage to 3d supernova models to see how they match up.  This segment is in the 3rd episode, “Most Powerful Stars,” which airs May 19 at 9 pm.

Blowing things up is just one of the cool things I got to do on the show.  Some others:  mixing up two tons of cornstarch and water in a cement mixer and then "walking on water,” racing a next-generation Mars/Lunar rover at Johnson space center, watching a Delta IV rocket engine test at NASA Stennis, shooting a hypervelocity gun at NASA White Sands, running on a reduced-gravity treadmill, putting on a space suit, shooting a Tommy gun (to represent the radiation on Mars), outrunning simulated lava, and deliberately lighting a house on fire to watch it burn.

But some of my favorite stuff got cut from the first episode.  So I’ll explain a bit of it here.  Less than two weeks after being cast, I was on my way to Johnson Space Center in Houston to shoot our first episode, “Surviving Outer Space.”  There, for the first time, I got to meet one of my cohosts, Mike Massimino.   Mike might be one of the closest things we have on Earth to a superhero.   Aside from the alliterative name, he’s incredibly nice, funny, super-smart (he has a PhD in engineering), can fly airplanes (which he does on the show), and he’s a freakin’ astronaut!  He risked his life to repair Hubble, and even tore off a stuck rail to make it happen.  I felt like I already knew Mike -- I’d seen him in the spectacular documentary HUBBLE IMAX, but more than that, I’d watched countless hours of NASA TV, practically holding my breath, as he repaired the Hubble.  He actually fixed STIS, an instrument that I use regularly to study supernovae.   So a good amount of my success as a professional astronomer, I owe to Mike’s remarkable dedication and training.

First up, Mike and I got to visit the NASA food lab.  NASA’s chief food scientist was there to explain to us how that aspect of the space program works.  But even better, they had several astronaut dishes prepared for us to sample.  This is way beyond freeze-dried astronaut ice cream.  The food does often start dehydrated, and you hook the pouch it comes in to a machine that squirts in hot water.  Mike showed me the ropes:  you take your scissors, cut open the pouch, and eat it with a fork and spoon.  We tried meatloaf, macaroni and cheese, and peach cobbler, and all were delicious.   Before launch, each astronaut gets served a variety of dishes, and they rate each.  A nutritionist then prepares a set of meals taking into account a balanced diet, caloric requirements (higher if you are spacewalking), and each astronaut’s favorites.   Interestingly enough, because food is so heavily tied to morale in the strange and foreign environment of space, if you have a favorite recipe, say from your mom or a favorite restaurant, NASA will actually work with them to try to adapt it to be space-worthy.  I had a blast, but that segment ultimately got cut from the show.  Mostly that is because it was decided there wasn’t enough drama related to the “surviving space” aspect of this episode.  But part of it could have been the fact that it was Mike and my first time on camera.  I think we did a decent job, but we kept going off on tangents when interesting subjects would come up.   The director continually had to rein us in, and bring the subject back to the survival aspect.

While filming at JSC, while moving through an area to film a scene, we happened to run into the shuttle astronauts training for Endeavour’s last mission: STS-134 – the one set to launch soon.   The crew was really friendly, allowing us to stick around a chat while they finished up practicing.  I got to chat with Drew Feustel, another astronaut I’m eternally grateful to for repairing Hubble.  They even let me stick my head up into the shuttle flight simulator to watch two of them practice maneuvers.  One was commander Mark Kelly (this was prior to his wife getting shot).  After they were done, I grabbed this picture! 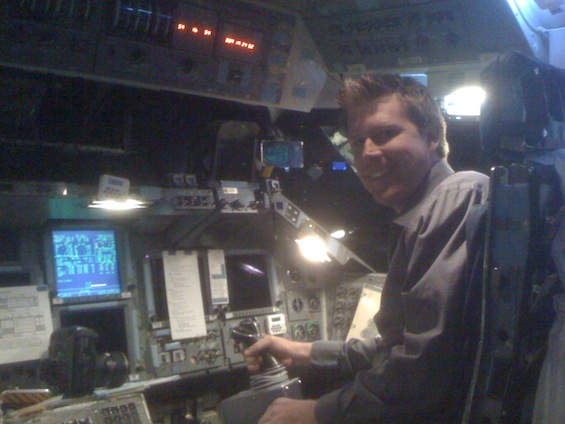 But that wasn’t the end of my Shuttle simulation adventures.  Mike and I also got to shoot a scene in another exact replica of the Shuttle mid deck and flight deck where the astronauts train.  The Shuttle is an amazingly small place.  I have seen closets that are larger -- seriously.  And up to seven astronauts may have to spend up to a couple of weeks in there if they aren’t going to the ISS.  And after that we roamed around in the Space Station mock-up.  That thing is huge in comparison – it looks like a movie set.  But we didn’t get to film there, opting for the Soyuz capsule instead.  It was a real one – the bottom half had been to space, but we were in the orbital module.  That thing is tiny too!  It can only hold 3 people.  In fact, the cameraman, sound guy, and director had to stay outside and point the camera through the door while we filmed the scene.   Sadly, all of these segments exploring spaceships got cut from the show.

Finally, we also got to go the Neutral Buoyancy Laboratory.  This contains a mind-boggling large pool where they have a massive mock-up of the ISS under water. 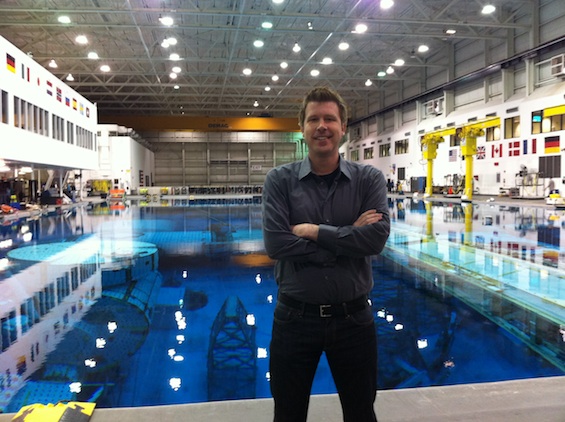 Astronauts train there in their suits to simulate the weightlessness of space.  That got cut too.

So what did make it in the episode?  Watch Thursday to find out.  And coming up we have episodes about the most powerful stars in the galaxy, space construction, the biggest eruptions in the universe, space travel, and how astronomical objects die, just to name a few of the topics.  So check the National Geographic Channel every Thursday at 9 Eastern.  Non-US readers – the show will eventually show internationally, but not until the fall.

I hope you like the show.  It was a hell of a lot of fun to make. If people enjoyed this article, I may write a few more about what happened behind the scenes of a few more episodes.

Thanks to Katrina Marcinowski for the great looking photos from explosion day.