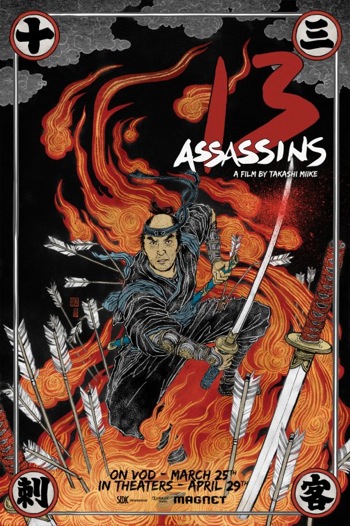 Though it's been available on VOD for the last month, I know a number of people who held off watching Takashi Miike's 13 ASSASSINS until they could see the widescreen epic on the big screen. Their wait will be richly - and bloodily - rewarded this weekend, as Miike's samurai masterpiece hits select theaters across the United States. Total. Fucking. Massacre.

It's absurd that a film this big and entertaining is going out in limited release, but this is the way it's always been for chanbara flicks in the U.S. (even Kurosawa's). It's a shame, too, because 13 ASSASSINS is not only Miike's most accessible film to date, it's also his best since AUDITION. Having turned fifty last year, Miike is smack dab in the middle of what is typically a filmmaker's prime - and I'd selfishly love to see widespread international success encourage the madly prolific director to focus on one movie at a time while he's dialed-in like this.

We'll have to wait and see if Miike feels like changing it up over the next decade (I'm not expecting the same degree of restraint from Miike's next film, the amusingly exclamatory NINJA KIDS!!!). For now, let's celebrate what we've got: a samurai-on-a-mission movie that compares favorably to the best swordsman yarns spun by masters like Kobayashi, Kudo and even Kurosawa. When I Skyped with Miike a couple of weeks ago (via translator, which is why the below interview is so short), I was keen to find out if he approached 13 ASSASSINS differently from his many other films. This is an unavoidably formal interview (it's hard to get conversational in this kind of setting), but Miike's answers - particularly his explanation for why her prefers actors with little-to-no weapons training - are illuminating. 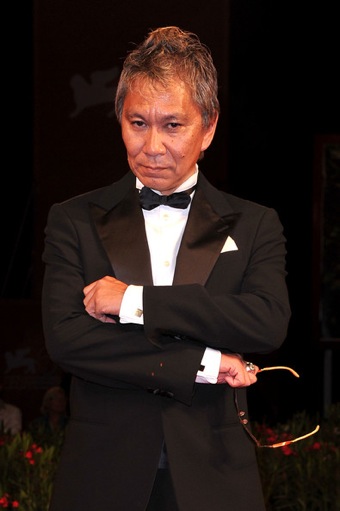 Mr. Beaks: How familiar were you with the original film before taking on the remake? Is it popular in Japan? It's pretty much unknown in America.

Takashi Miike: When I was asked to remake the movie, I had heard of the title, but I had not seen the movie. The movie was released when I was three years old. I would say that probably anyone under sixty in Japan hasn't seen the movie. It's not a popular movie. But when I saw the movie, what I felt was the quality of it, and how well it was made. Beyond that, what I felt was the extreme desire, the power of the people who made this movie. Not an individual passion, but the [overall] passion that the people at that time had for making movies, that the studios had for making movies - their ability and their power to make movies. I noticed how much we've lost in our ability to make movies, and I thought it would be a good time for a full-frontal attack on how to get that back.

Beaks: 13 ASSASSINS is different aesthetically from most of your movies. Was your approach to this film different from the others?

Miike: What it comes from, essentially, this different approach... we're talking about samurai, we're talking about warriors - people whose job it was to fight other people. That was their raison d'etre. Their self-worth came out of that. But then peace comes to the nation: they lose their place in society, and they are reduced to being politicians; the fact that they carry swords that are meaningless. So I decided we couldn't be free in our approach; it became necessary to take a more orthodox approach, and that comes out in the film. Other people, when they're making a samurai movie nowadays, will use lots of computer graphics for the action scenes or to heighten the effects on the wardrobe. They'll even change the values of the characters to meet a modern-day audience better by adding a love story or whatever. We didn't do that. We tried to stick true to form, and that's why it was so orthodox.

Beaks: How involved was producer Jeremy Thomas. He's got a rather impressive track record, having worked with Bernardo Bertolucci for so many years.

Miike: At the time this project came along, I was working with Jeremy on doing a different project, which is actually a samurai drama as well. We were moving along with that script, and things didn't happen. Then this project came along, and Jeremy decided to be involved in this one instead. So as soon as we had a script, we were able to get input from him. As a producer, what I appreciate most about Jeremy is that he was able to guard me from the Japanese investors; he allowed me to make the movie I wanted to make in the environment I normally make movies. When we finished the first edit, we showed it to him and got his opinion, but I just really appreciate the way he allowed me to realize my vision and guard me from people telling me what to do.

Beaks: The final battle sequence is magnificent. How much planning went into it? Did you pre-vis or storyboard? And how long did it take to shoot?

Miike: In general, the filming was about three weeks for the action, including all the horse scenes. But the fact that we ran into quite a bit of bad weather where we were, it was really more like a period of two weeks, and it was quite hard on our physical bodies, because it was pretty much the limit to what we could stand with the number of long hours back to back.

And when we say "two weeks" in Japan, we mean seven continuous days; we don't mean five days on and two days off like you have in L.A. Eighteen-hour days, back-to-back, no golden time, no union, etc. But the good thing about this short period of time is the real situation affected the actors in a sense that helped make the movie. They were fighting for their lives not only as characters, but as actors with their backs against the wall with the short time period we had. Since we used no CG, and with action people... written words don't really help, and using storyboards don't really help. The best thing to do is to try the action, see how it goes, and make the changes there. I guess our storyboards was just the action itself, which would change on set.

Beaks: How proficient were the actors with their weapons? 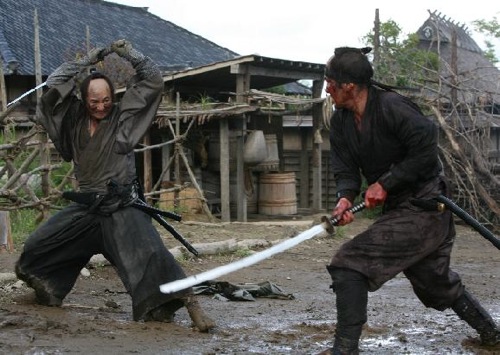 Miike: For the thirteen assassin actors, over half of them were doing action scenes with a sword for the first time, but in the end it turned out to be quite a great effect. They were completely worried; they felt apprehension in this. But then they became completely dedicated to their path to try to master the sword - until the point where they couldn't even stand anymore, they were practicing so much. That really matched the characters in the actual situation they were portraying. If the actors had been skilled from the beginning, and had been in several samurai movies before, the way they approached the action would've been different; they probably would've ended up being something they were doing to look good or be beautiful, or to fall into the trappings of the stereotypical form that they had. But since they had no experience, they were essentially treading into the unknown, and I kind of appreciated the sense of treading into the unknown - that is where you'll find the real gems in filmmaking.

Beaks: So what do you plan to do next?

Miike: [I've] got two films. One is a crazy Ninja kids film, where kids at a ninja school go crazy and go on a rampage. (Laughs)

Unless this is the greatest movie year ever, 13 ASSASSINS is a lock for my 2011 top ten list. If it's playing anywhere near you, please get out and see it this weekend.