AICN COMICS SPECIAL EDITION: Check out KOGA’S EMAIL, a response comic to the Japan devastation, and support a noble cause!

Hey folks, Ambush Bug here. I got the email below yesterday and figured it was worth passing along to the readers of AICN COMICS. 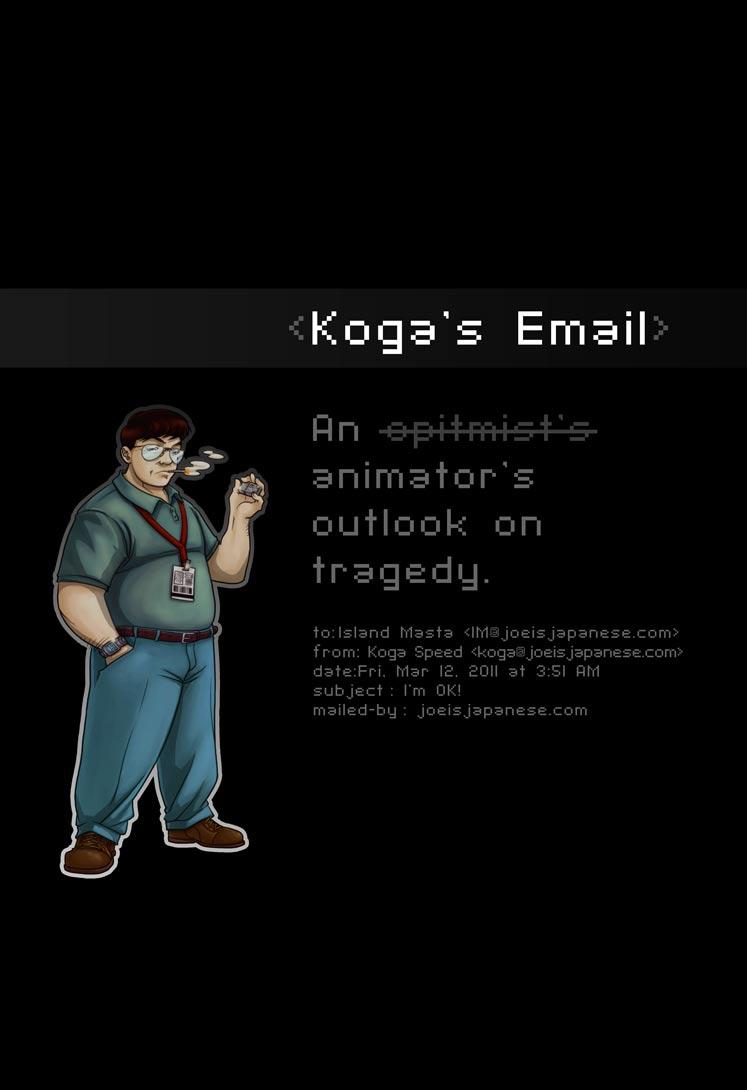 When the March 11 earthquake hit Japan, I was sound asleep enjoying my first vacation in years. My friend Joe’s call at 3am was not welcome for many reasons, and there was no way I was returning to slumber that night. Tons of calls started pouring in from around the globe, asking me if I had heard from anyone yet and if I knew if everyone was OK… I had not. It was nerve-wracking being so far away, and unable to do anything.

The first email came in late the next day from our dear friend and the real-life basis for the Joe is Japanese character, Koga Sato. His email was such a relief to read. It was inspiring and goofy. So much so, that we felt compelled to illustrate it and pass it on to the world (with Koga’s permission). This email made everyone at the animation studio feel a sense of duty, and a lot of time was donated to make this mini-comic.We hope you enjoy this little read. If you do, we ask that you consider donations to the Search Dog Foundation. It’s an unsung group that has sent rescue dogs to find people in over 75 deployments- including the World Trade Center attacks, Hurricane Katrina, the Haiti disaster, and now in Fukushima, Japan. We’re hoping our little odd-ball comic will support a lesser known group of (furry) heroes.

Feel free to forward the crap out of this email. You can also send people a direct the link to read the comic here.

Some time definitely went into making this effort to drive donations.

We hope it works.

Thanks for the heads up, Jesse. Check out the comic below. It’s pretty damn impressive and definitely something worth supporting.