(If you've never seen KILL BILL, skip this review: I'm going to let slip a huge spoiler right off the bat. Oh, and FIELD OF DREAMS gets spoiled in the fifth paragraph.) 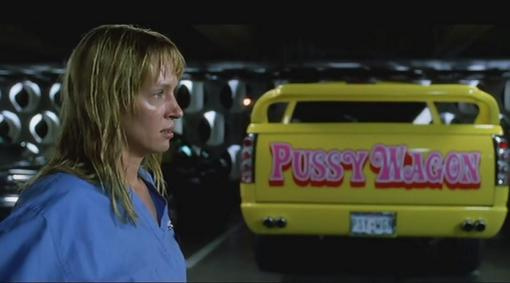 When the decision was made in the summer of 2003 to split Quentin Tarantino's four-hour revenge yarn, KILL BILL, into two parts, it was an ideal compromise between two notoriously obstinate individuals. This release strategy allowed Tarantino's vision to remain mostly intact, while at the same time gave Miramax honcho Harvey Weinstein the opportunity to turn a $60 million gamble into two $30 million sure things. It was an Art vs. Commerce settlement that benefitted everyone.

Except Uma Thurman. And the audience.

Though a necessary evil, this halving of a film designed to be viewed in whole (broken up only by a brief intermission) required Tarantino to give moviegoers a palpable reason to come back and pay cash money for Volume 2. It wasn't enough that The Bride's quest for revenge was only two-fifths complete because, at the midway point of Tarantino's idiosyncratically-structured narrative, we just weren't that emotionally involved in her mission. Not yet. 111 minutes into the story, we actually knew more about O-Ren Ishii than The Bride (who hadn't yet been outed as Beatrix Kiddo). And with Hattori Hanzo's ominous warning - that revenge is "like a forest" in which one could easily "get lost" - lingering in our thoughts, it seemed Tarantino might be leading us toward a dark and unsettling conclusion. Volume 2 sounded like a bummer.

So he fed David Carradine's Bill a cliffhanger tease of dialogue: "Is she aware her daughter is alive?" And suddenly, for the first time in the KILL BILL saga, The Bride's score-settling spasm had a moral purpose.

This was stellar salesmanship at the time, but now that I've seen Tarantino's magpie opus in full, as KILL BILL: THE WHOLE BLOODY AFFAIR, I hate that we were given that piece of information before Beatrix. Imagine if Amy Madigan's character had spied Kevin Costner's dad walking out of the cornfield during the second act of FIELD OF DREAMS and, worried that he might flip out, kept it to herself. That's basically what the cliffhanger at the end of KILL BILL VOL. 1 accomplishes. Not only does it cheat us out of an emotionally devastating revelation during the story's final chapter, it diminishes Thurman's anguished and uncomprehending reaction as Beatrix lays eyes for the first time on B.B., the child whose murder she's been avenging since crawling out of that hellhole of a hospital. In this cut, the heartbreak is unbearable. There's four-year-old B.B., toy gun raised, aimed to kill, with her scumbag biological father - a man who's possessed women his whole wicked life - egging her on. "Bang bang," she says. It takes Beatrix a moment to know how to respond, but she finally hits the ground as ordered. Her baby shot her down. Brutal.

Shorn of commerce-conceding baggage, turns out KILL BILL is a masterpiece after all.

KILL BILL: THE WHOLE BLOODY AFFAIR is not be the value-added orgy of cinema it was rumored to be; it is instead the definitive cut of the film, the one Miramax would've released had there been $120 million worth of admissions out there for a four-hour-plus paean to martial arts and motherhood. This is not a surprise: Tarantino screened this cut for critics at Cannes in 2004, and would later show it at the Alamo Drafthouse and the American Cinematheque. It's a known quantity. Those pining for an extended anime sequence or a House of Blue Leaves showdown with grislier deaths will have to settle for the latter finally unfolding sans MPAA-friendly switch to black-and-white. Perhaps there will be gore-soaked outtakes whenever this cut makes its way to Blu-ray (don't ask when, 'cuz no one seems to know at the moment). Considering how Tarantino typically holds back deleted scenes (e.g. the missing Maggie Cheung footage from INGLOURIOUS BASTERDS), I wouldn't count on it. And, really, who needs to see it?

My overall take on KILL BILL hasn't changed since 2004: it's a dark-hearted tale of revenge that staggers from the forest when Beatrix, facing death a second time, literally punches her way out of a wood casket and clambers up through six-feet of soil (one of the most stirring sequences Tarantino has ever put to film, as well as a master class in film editing from the late, great Sally Menke). Up until then, Beatrix is a cold-blooded murderer bound to the nihilistic existence Bill tried to create for her; from that point forward, she is her own woman, empowered by Pai Mei's teachings to liberate herself from a vile man who, once upon a time, sweet-talked her into subservience. And it is because she arrives at this epiphany on her own - at what is literally her lowest moment - that Beatrix earns her second chance with B.B. (after delivering the improbable coup de grace to Bill's ticker, which squares both Beatrix and Pai Mei - who taught her the mythical technique - with the universe).

No one is to blame for KILL BILL being compromised eight years ago. Harvey Weinstein gave one of the most talented filmmakers on the planet carte blanche, and, in splitting the movie, protected both his investment and Tarantino. Had KILL BILL bombed, I'm not sure how QT would've responded. He went to career-endangering lengths to get this movie right: he refused second-unit assistance on the House of Blue Leaves battle, and basically learned how to shoot a mindblowingly complex action sequence on the job. On Miramax's dime. No one gets this kind of leeway in today's Hollywood. And while Tarantino's probably too confident to be cowed by a box-office disaster, I'm just glad he had his buddy Robert Rodriguez riding shotgun when he finally put one in the ditch (though I love GRINDHOUSE unabashedly).

But we're well past the point of worrying about KILL BILL's profitability: Volumes 1 and 2 have served their purpose and moved their units; Tarantino's coming off his biggest theatrical success (INGLOURIOUS BASTERDS); and the Weinsteins are poised to break all existing box office records (inflation adjusted) with THE KING'S SPEECH: A PG-13 EXPERIENCE. Let right be done, gentlemen. Let the rest of the world see KILL BILL as Tarantino intended - and as Beatrix Kiddo couldn't have imagined.

Remember... the magpie is worthy of your respect.

P.S. If you're any kind of KILL BILL or Tarantino fan, you should own D.K. Holm's KILL BILL: AN UNOFFICIAL CASEBOOK.