(There are major fucking spoilers in the below review.) 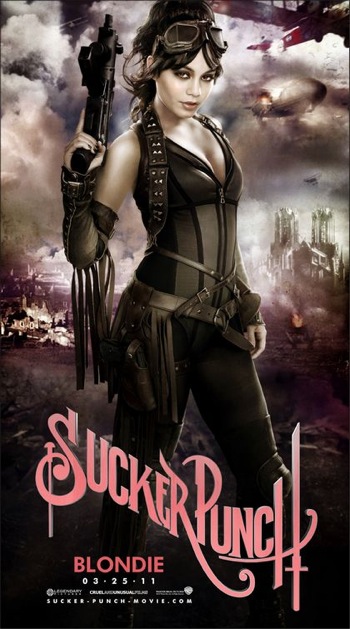 Zack Snyder's SUCKER PUNCH kicks off with the parting of a theater curtain onto which the Warner Bros. logo has been projected. It's a Brechtian gesture borrowed from Baz Luhrmann's MOULIN ROUGE, only not quite as empty; while both films call attention to the artifice of the proceeding work, Snyder's plunge through the proscenium at least carries with it an inquisitive charge. Luhrmann's gaudy revel was only about heightening familiar archetypes to a delirious, fever-dream degree; it aspired to be nothing more than a high-energy melange. Snyder's film is just as stylistically audacious, but the action and the sexuality are presented at a remove. The only logical reading of Snyder's films suggests the director is genuinely unnerved by the fetishization of scantily-clad (if clad at all) fighting women that's been a staple of the fantasy genre since Frank Frazetta reigned supreme. The girls in SUCKER PUNCH look great brandishing all manner of weaponry, but they're pawns in a male-created universe. They're human dolls. Their victories are not their own.

In other words, all of those eye-popping, expertly-staged action sequences Warner Bros. has been selling since last year's San Diego Comic Con? They're not meant to be rousing at all. They're hot-and-heavy reveries induced by the gyrating Babydoll (Emily Browning), a waifish innocent who's been institutionalized by her sadistic stepfather (Gerard Plunkett). If you get off on the fantasies, you're as bad as the drooling louts for whom Babydoll is writhing; if you find them empowering, you're completely misguided.

The latter revelation - which gets sprung on the girls late in the film - is the "sucker punch". Adventuring in skintight military uniforms and schoolgirl outfits isn't quite the "fuck you" to the world they think it is - tragically, the message being sent is "fuck me". On one heightened plane of reality, they're burlesque performers being pimped out to high-rolling rakes by their abusive manager Blue (Oscar Isaac); on the more grounded plane, they're just troubled girls left to rot in a decrepit institution (where they're pawed by their abusive caretaker Blue). Babydoll's situation is much more dire, of course, given that her stepfather has shelled out for a lobotomy meant to wipe clean the record of his crimes (most notably the murder of Babydoll's sister) - and it's only when she's strapped into a chair, awaiting the impalement of her frontal lobe, that Babydoll conjures the first alternate plane of reality.

And here's the first of many problems with SUCKER PUNCH: the moment Snyder cuts from a resigned, soon-to-be-catatonic Babydoll to the defiant Sweet Pea (Abbie Cornish), the jig is up. Anyone familiar enough with the fantasy/sci-fi genre to be interested in what Snyder's attempting has seen the film he's, as Hitch would say, fromaging. And while this notion of transference is something of a novel spin (the dream of Sweet Pea escaping to Fort Wayne, Indiana is the last thing that goes through Babydoll's mind before the metal spike), the text never links these two characters in a narratively logical or thematically compelling way.

This is frustrating because I'm all for an $82 million movie that punishes the audience for indulging their inner-misogynist under the guise of female empowerment - especially since so many alleged "girl power" texts are the leering products of a male imagination. And while I would argue that it's perfectly fine to be turned on by the sight of an ass-kicking woman (I mean, this is James Cameron's bread-and-butter), there's very often a Sweet Gwendoline quality to movies and shows like CHARLIE'S ANGELS, DARK ANGEL and DOLLHOUSE*: the women feel less like heroines, and more like lasciviously manipulated objects of desire. But Snyder's movie lacks both the chutzpah and the intellectual rigor to fully explore this notion, and ultimately winds up being an intermittently breathtaking movie for no one: the ideas are half-baked and, at 109 minutes, it's just long enough to wear out its welcome as a mindless action movie.

There's also the continuing problem of Snyder's limited pop cultural frame of reference: while I enjoyed his appropriation of overly familiar songs and film sequences in WATCHMEN (in particular his gleeful travestying of Leonard Cohen's once-lovely, now-ruined "Hallelujah"), there doesn't seem to be anything subversive about, for instance, his use of The Pixies' "Where Is My Mind" - which, remix and rearrange it all you want, belongs in perpetuity to FIGHT CLUB. Factor in SUCKER PUNCH's institutional green color palette, which unavoidably recalls the look of Fincher's landmark '99 film, and it feels like he's just emulating one of his favorite movies. If the song served any other purpose - aside from ironically presaging Babydoll's forthcoming lobotomy - I missed it. Unfortunately, the rest of the soundtrack is equally uninspired: "White Rabbit", "Army of Me", "We Will Rock You"... dig a little deeper, man.

And yet for all its failings, Snyder's prodigious filmmaking talents are on full display in SUCKER PUNCH. The action sequences may be emotionally inert, but they're supposed to be. If that was Superman battling humanoid minions on a bomb-rigged train headed straight for the heart of Metropolis, audiences would be losing their minds. So if you're worried about THE MAN OF STEEL, don't be: all Snyder needs is a classically-structured script with nothing subversive up its sleeve, and he'll be fine.

Like most cinematic world-builders (Ridley Scott springs to mind), Snyder is only as good as his material. No shame in that - unless he insists on writing it.

*Though I'm told Joss Whedon's short-lived series was getting interesting right as it was cancelled.