THE BIG C! Nordling's New Criterion Column Shoots Out The Gate With SWEET SMELL OF SUCCESS!

I have one column percolating right now, for YOU KNOW, FOR KIDS! that I'm writing, and that should be in sometime this week.  Can't give you a firm date on it because starting next week I'll be at South By Southwest for a couple of days and then taking the family on a vacation in New York.  It's going to be a crazy next couple of weeks at Casa De Nord, so I'm trying to get the bulk of my writing in now and I'm still fairly new at this.  I appreciate all the feedback, good and bad, I've received so far.   Believe it or not, I do read talkbacks and I do take many of the criticisms into account.  All I can say is that I will do my best to improve as a writer and as a moviegoer and I hope you keep reading as I adjust.

As most of us know by now, Criterion is the pinnacle of DVD and Blu-Ray.  We likely have at least one on our shelves, even if it's ARMAGEDDON.  I remember my first Criterion, a gift from my friend Joe, of my favorite film of all time, SEVEN SAMURAI.  My friend had a laserdisc player and collected Criterion titles avidly.  I remember us opening up the AKIRA Criterion, putting it on, and just marveling at the colors, so much richer than any videotape.  And that was just the laserdiscs.  There's something about holding one of those discs, knowing that so much care and dedication and flat out film love went into it, that each and every Criterion release is something special.  I know many other sites write about Criterion, including Moises Chiullan at Badass Digest and the wonderful guys at Criterion Cast.  They do fantastic work and I urge you to go and check them out.

I don't often blind-purchase movies any more.  It's just too much money.  But with Criterions I often make an exception, especially if it's a title I've heard about for years and never got around to seeing.  Most of the films I write about here will be films I've experienced for the first time.  I'm embarrassed to say many of the titles; just know that it's too freaking many, and the one I'm going to write about today I should have seen long ago.  But that's part of why I'm doing this.  My reactions to many of these films will be first-time ones, and if you're willing as a reader to follow me on this, then I'll do my best to accommodate.  You'll find that many of these columns won't dive into the technical aspects of the Blu-Ray.  That's intentional.  I'm more interested in the film being presented, although as we all know Criterion releases almost always have great special features.  But it's the film we want the most, so without further delay... 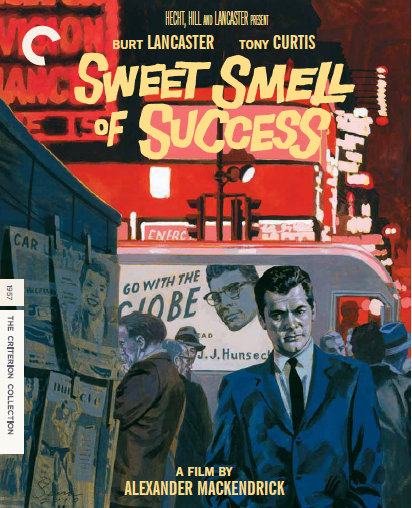 Alexander Mackendrick came from Ealing Studios in England, having made a couple of films with Alec Guinness, including the classic THE LADYKILLERS.   SWEET SMELL OF SUCCESS was his first Hollywood film, and if there's a meaner, more caustic film from that era I haven't seen it yet.  SWEET SMELL OF SUCCESS has dialogue so sharp and jagged that it often wounds the characters who have to hear it, whether it's coming from sleazy press agent Sidney Falco (Tony Curtis, just oozing here), or his master - and J. J. Hunsecker (Burt Lancaster) is Saruman to Falco's Wormtongue, for lack of a better analogy - a columnist whose words make or break many of the hopeful actors, musicians, and club owners of the city.  Those people come to Falco because he has an in with Hunsecker, and hope to be mentioned in his column.  He claims to be Hunsecker's friend, but Hunsecker doesn't have friends.  What he has is a web, and he's the spider, enjoying, feeding off all the flies within his grasp.  The only person who has gotten any kind of access to Hunsecker's inner soul is Hunsecker's sister, Susan (Susan Harrison), and Hunsecker cares for her very much, but it's more of an obsession than it is anything else.

Susan is in love with Steve Dallas (Martin Milner), a jazz musician in an up-and-coming band, and Hunsecker doesn't like it one bit.  As the film starts, Hunsecker has given Falco a task - do whatever you can to break them up.  Since Falco needs the publicity for his clients that Hunsecker's column provides, and he's in debt, he has to comply.  What follows is manipulation, greed, a little sex, drugs, jazz, and the underbelly of the human heart.  Where does a man's conscience draw the line?  How much is truly enough?  In a world where integrity is "a pocket full of firecrackers - looking for a match!" who will be the one to light the fuse?

They don't get scripts better than SWEET SMELL OF SUCCESS.  They just don't.  Clifford Odets and Ernest Lehman (based on Lehman's novella) wrote a script dripping with wit and cruelty.  Every line is smart, bitter, mean, and funny.  But it wouldn't work if Mackendrick hadn't directed his actors to mean every word that they say.  Tony Curtis and Burt Lancaster's work here is extraordinary, every line dripping with venom and veiled threat.  I don't know how they got along behind the scenes, but the way Curtis and Lancaster play off each other here is more like dueling than acting.  Falco grabs every crumb off Hunsecker's table greedily and Hunsecker dispurses those crumbs like a king to his peasant subject.  Lancaster digs into Hunsecker with aplomb, and it's remarkable.  He plays Hunsecker as almost bored with the ease which he manipulates everyone around him (except his sister), knowing in his heart that he will never find anyone who can match wits with him.  I don't think Lancaster has ever been better in any of the other roles I've seen him in.  You would think that a character like Falco wouldn't achieve any sympathy, but Curtis, who before SUCCESS was mostly known for his nice guy roles, found the heart, small and shriveled as it was, in the role, and he's brilliant.  He has the more difficult role than Lancaster.  Curtis puts it behind the eyes - he knows very well what he does and the repercussions of those actions, but you can see it killing his soul, little by little.

The cinematography by James Wong Howe is remarkable as well, showing the seedy, darker side of New York, gritty and full of life.  Elmer Bernstein's score is tremendous, one of his best, and that's saying something.  The jazz, the horns, all of it build up the tension in the film and it gives us a sense of New York, alive and breathing, even as the darker aspects of the corruption underneath work their manipulations.

The Blu-Ray's picture is crisp, but I've never had any problems with Criterion's transfers.  They take great care to preserve the film's imagery and make it look just like it did when the film premiered in 1957.  The disc is fairly loaded as well - commentary by film historian James Naremore, a documentary on director Alexander Mackendrick, a documentary on James Wong Howe, interviews with Neal Gabler, director James Mangold and Mackendrick (Mengold's instructor and mentor), and trailer.  The book also has two short stories by screenwriter Ernest Lehman, an essay by critic Gary Giddins, and notes on the film.

SWEET SMELL OF SUCCESS is the film I wanted to open up this column with because I'm not sure how well known it is outside of film fans.  But if you're yearning for some twist-of-the-knife dialogue, wonderful acting, and just quality classic work all around and you haven't seen it yet, this Criterion release is a perfect blind buy.  I've only just seen it, and it's one I'm going to have to watch many more times.  As Falco said, "The best of everything is good enough for me," and Criterion supplies that in spades.