Wanna check out the sweet art poster for Ti West's THE INNKEEPERS? Of course you do!

Ahoy, squirts! Quint here. As a one-sheet collector I'm dying for some big studio boss to come in and mandate nothing but art posters from their studios. When Tyler Stout and Olly Moss Mondo posters sell out in under a minute and go for thousands on the secondary market you know that art posters are still very relevant.

Go to any movie site or message board and you'll hear people bitching about photoshop posters. I never hear anybody on the pro-Photoshop side except for accountants and pollsters who say that non-photographic posters mean films won't open.

To that I say horseshit. When you have a Spider-Man movie or the next Batman movie or any big tentpole release people are seeing it. These big studios have the ability to change perception.

Listen, I get minimalist posters are a niche audience of rabid collectors and they won't work for mass audiences... but I long for the days of Drew Struzan, Saul Bass, Bob Peak and John Alvin. Right now all we get are special one-offs from passionate filmmakers (who are usually poster collectors themselves like Guillermo del Toro and Frank Darabont), but those are relegated to Comic-Con posters and web art, never put up in theaters.

This rant was inspired by the rather cool art poster done for upcoming Dark Sky Films flick from director Ti West, who is showing a talent for real throwback films. His THE HOUSE OF THE DEVIL legitimately felt like a 1980 Canadian cult film you'd find buried deep within the local Mom and Pop video store's Horror section in an oversized VHS box.

The Innkeepers is about the last two employees at a closing haunted hotel and will be premiering at SXSW.

We get to debut the poster, so enjoy the first look! Click here to visit the site of the designer, TheDudeDesigns! Also, click the poster to embiggen! 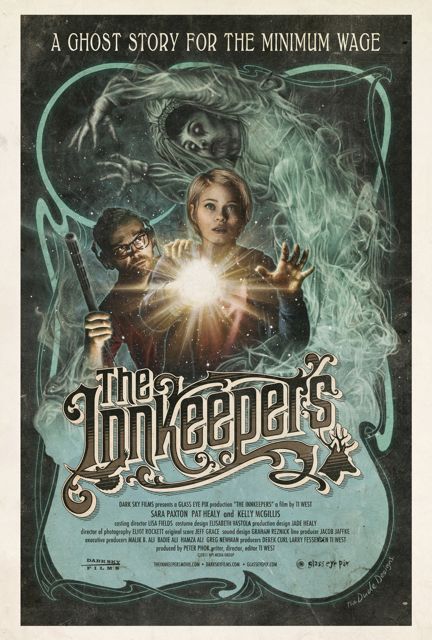