Mondo Tees' New Poster Can Whistle 'Turkey In The Straw' while Eating Cheese!

Got an email from the Drafthouse / Mondo Tees team last night asking if I would like to debut their next print, I automatically said yes - before I even knew what it was... but once I heard the subject matter - the geek in me squealed with delight.

Yesterday was indeed an extraordinary day.   I've begun to become independently mobile.   The legs can get me to a standing position independently of anybody's aid...   My producing projects, all 4 of the ones in a state of development took the next step yesterday.   (I'll share at some point soon) and then... the big one...  I pulled my own pants up, ala Dick Powell in MURDER MY SWEET...    BUT - this poster - hints at possible things to come...

The idea of MONDO teaming up with Walt Disney to create posters, which of course HAS to start with the Cartoon below...   But - who knows what the future may hold, but man...   the potential with MONDO and DISNEY...  my god - 20,000 LEAGUES, CHERNABOG...  the artists in their roster...  whew.

Yup - STEAMBOAT WILLIE - that brilliant debut of Mickey Mouse (the first released, but technically not the first animated) that was animated by UB Iwerks and featuring the voice of Walt Disney as Mickey Mouse himself.   Walt decided to debut Mickey with the advent of sound - and that sly decision resulted in pure brilliance.  Almost instantly Mickey Mouse became a world wide sensation.

When I responded to the email  - I stated I wanted to see the poster immediately as I'm a huge fan of Iwerks & Disney...  and when I saw Iwerks properly credited upon the poster - my love of Mondo expanded.  That it was a satiric rip on the great Buster Keaton's STEAMBOAT BILL JR, further enhances my love of this first Mickey cartoon. 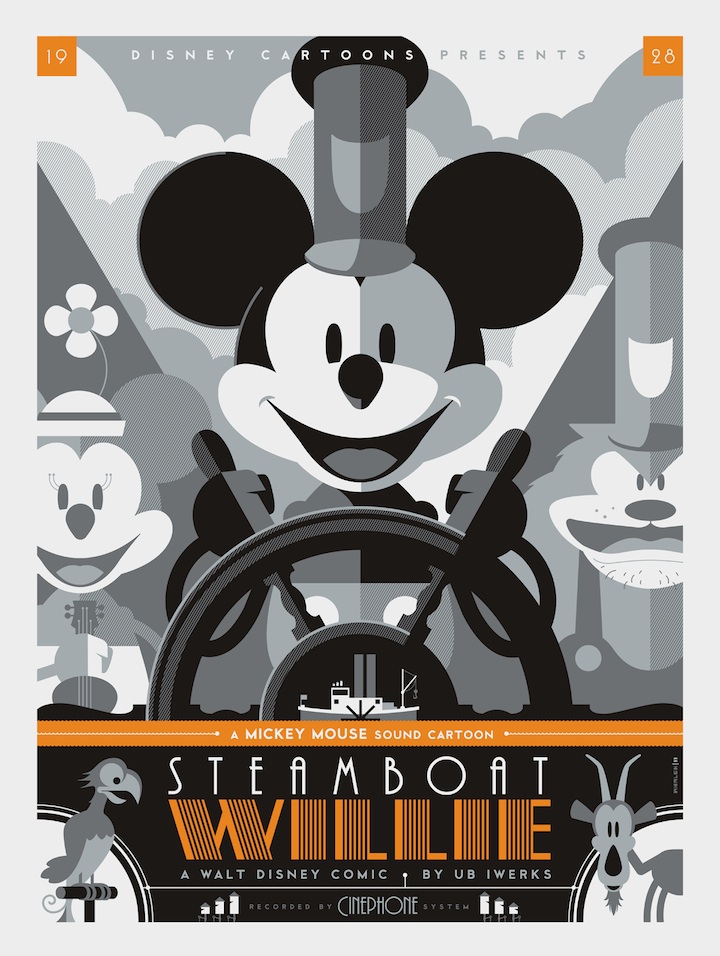 Poster by Tom Whalen. 18"x24" w/ metallic inks. Edition of 200. Printed by D&L Screen Printing. $40
On sale Friday, 2/25. Follow @MondoNews for the "on sale" announcement.
A variant will be sold by Sideshow Collectibles at some point in the future.