AICN HORROR debuts Make / Remake as Bug looks at LET THE RIGHT ONE IN and LET ME IN! Plus twin terrors with TWINS OF EVIL and SECONDS APART!

Logo by Kristian Horn
Greetings, all. Ambush Bug here with another AICN HORROR: ZOMBIES & SHARKS column. Why ZOMBIES & SHARKS? Well, those are the two things that I’ve had the most nightmares about. It’s the reason I rarely swim in the ocean. It’s the reason I have an escape plan from my apartment just in case of a zombie apocalypse. Now if you’ve ever had those fears or fears like them, inspired mainly by nights upon nights of watching films of the frightening kind, this is the place for you. So look for AICN HORROR: ZOMBIES & SHARKS every Friday for the foreseeable future, horror hounds, where we’ll be covering horror in all forms; retro, indie, mainstream, old and new.

Last week we checked out a few After Dark Originals, HUSK & PROWL. Some wondered when they’d be able to check out these films. Well, SyFy is airing HUSK this Saturday (tomorrow) for all to enjoy and trust me, if you like scary scarecrow films, you’ll want to check it out. Here’s a link to my review of the film and interview with director Brett Simmons from last week. Hope you check HUSK out this weekend on SyFy! 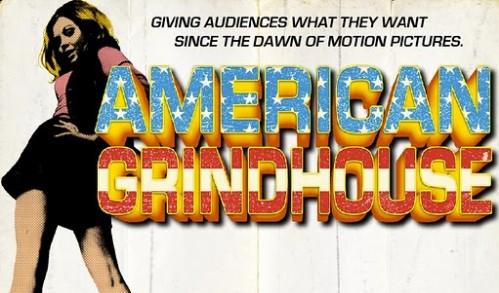 Last week I also reviewed AMERICAN GRINDHOUSE, an excellent documentary on the history of grindhouse films through the ages. Congrats again to the winners of the contest we ran and look for AMERICAN GRINDHOUSE premiering at the Cinema Village in New York this weekend (showtimes: 2:40pm, 7:40pm, & 9:20pm)!

Now, here’s what we’ve got on tap this week on AICN HORROR. It’s gettin’ twinsy round here as I take a look at a pair of films in my new Make / Remake regular feature (what with all of the remakes popping up these days), and more twin terror with horror films TWINS OF EVIL and SECONDS APART. Enjoy! 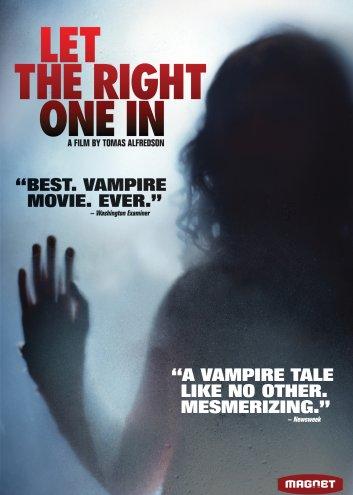 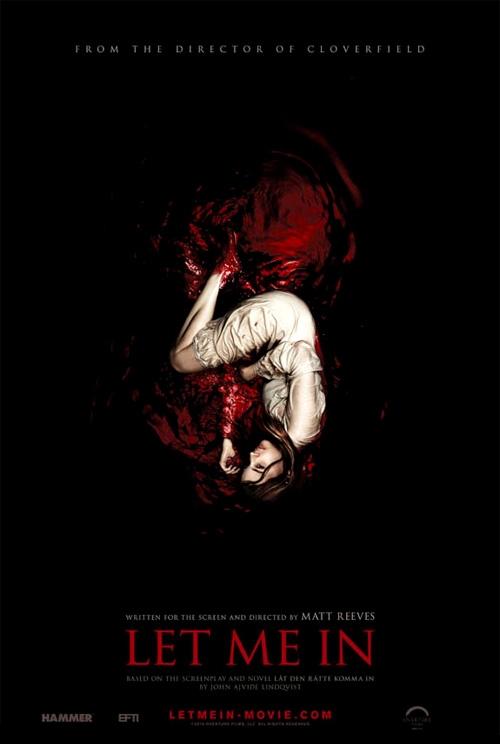 LET THE RIGHT ONE IN / LET ME IN 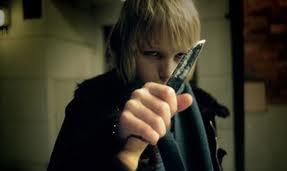 I know this isn’t going to make me very popular but LET THE RIGHT ONE IN, despite the tagline on the cover of the DVD, is not the best vampire film ever. It’s a great movie, sure, with some of the most iconic and creative uses of vampirism in a long time, but I just wanted to cut through the hype right away and say it’s not a flawless film. I’m not one of those folks that abhors the remake of the film either. 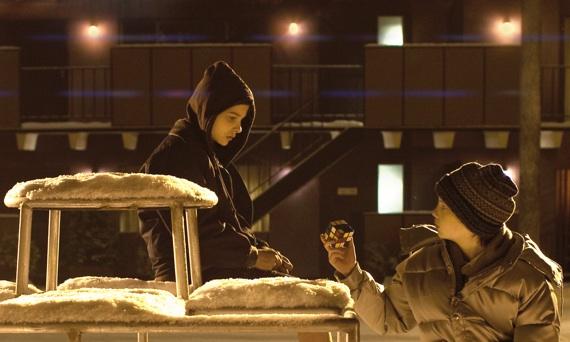 The tale of a young outsider who befriends an immortally young vampire set against a stark winter landscape best describes Swedish film LET THE RIGHT ONE IN and its Americanized remake, LET ME IN. Boiled down to the basics they are films about trust, the title of the original cautioning the viewer to be wary of who to trust, while its remake is a bit more bawdy and American in its more forceful tone. Both feature a pair of outsiders: Oskar/Owen, an awkward young boy who is bullied at school, left alone at home, and has violent ambitions of striking back and Eli/Abby who is a mysterious young person who moves into Oskar/Owen’s apartment complex and brings a whole lot of murder with her. Eli/Abby is as wary as Oskar/Owen is at first, both testing each others’ limits and initially pushing each other away. But events seem to pull these two lost souls together; Eli/Abby needs someone to help her find blood and Oskar/Owen needs someone to give him confidence. Both films tell a story of young love more complex than anything ever even associated with the words TRUE or BLOOD or TWILIGHT. 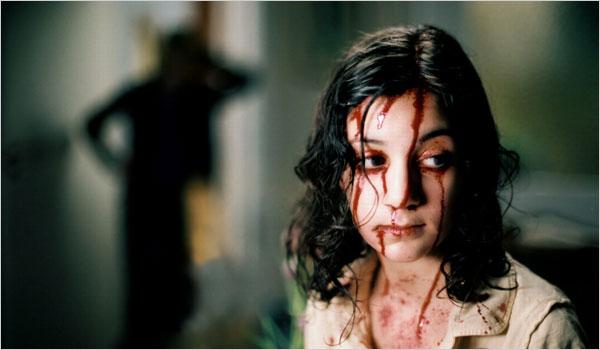 LET ME IN follows the storyline of LET THE RIGHT ONE IN pretty closely. The differences between the two are superficial for the most part. The tone and pacing in LET THE RIGHT ONE IN is much slower, but that’s to be expected with a foreign film, I’ve found. The remake shuffles around the narrative a bit (a new trend in modern films that once was innovative, yet now seems a bit tired), but basically tells the same tale, though with a bit more bombast to entertain the mass audiences. I don’t mind making the scope bigger when the scenes are used properly though. Reeves shows real talent in the uber-intense sequence when Richard Jenkins’ Father character is almost discovered in the back of a teenager’s car after his attempts to bring in a new victim for Abby fails. Even the car crash is handled with originality and technical skill, though at the same time, I love the simplicity of the same portion of LET THE RIGHT ONE IN as Per Ragnar’s attempt to kill a teen is thwarted in a school bathroom. Looking at these two scenes in particular really highlight the differences in these films and the different talents of these directors. 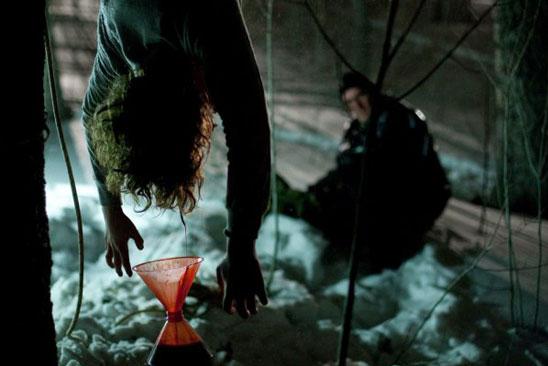 The performances of all four child actors are fantastic. Though Kare Hedebrant (Oskar) does a more convincing performance as a kid who just doesn’t know how to socialize very well, Kodi Smit-McPhee (Owen) shows the promise of an extremely talented young actor. Both Lina Leandersson and Chloe Moretz are enthralling as the young vamp, with Leandersson getting a slight edge because she’s much more of a real looking kid while Moretz has the beauty and talent of a future Hollywood starlet. I have to give the edge to Richard Jenkins when comparing his role with Per Ragnar’s simply because he brings a heft to the relationship between the Father and Abby that was something truly magical. The addition of Elias Coteas to any cast is great and though the role doesn’t exist in the original, it does serve its purpose as the witness in this film. 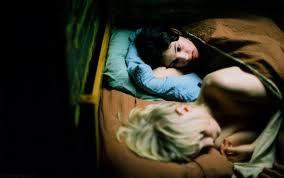 I don’t want to say that American audiences are dumber, but I do think that the studios think that way at times. There’s a lot of explanation going on in the remake that simply isn’t in LET ME IN. Maybe not in words, per se, but the cues are much more blatant. Jenkins’ character’s relationship with Abby is much more pronounced compared to the subtlety of LET ME IN’s relationship. Beefing up Jenkins’ role does give Reeves a chance to get a little more screen time for the amazing actor, so I’m not complaining about it. 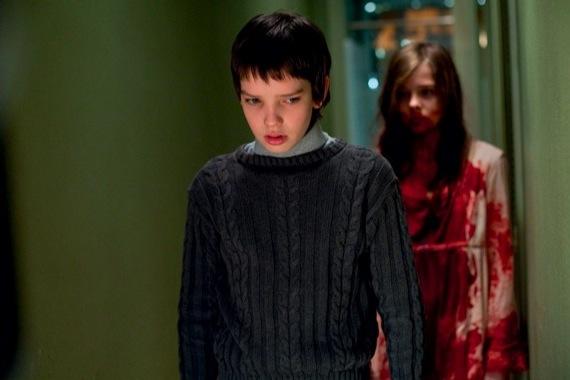 ***SPOILER*** And of course, the subplot that Abby is a young boy and not a young girl opens up a whole new level of sophistication in LET THE RIGHT ONE IN that LET ME IN only barely hints at. Though this fact is much more evident in the book (from what I hear, haven’t read it yet myself), one of the most disturbing scenes in LET THE RIGHT ONE IN takes place late in the film when Oskar cuts his hand in the secret room and Eli turns into an obvious male form as she laps up his blood from the floor and tells him to go away. Though it may be alluded to in the American version, I know people who didn’t even catch on to the fact that Abby was a boy. I don’t think that says anything about the person himself, but of how little they allude to it in the film. Themes of homosexuality run rampant throughout LET THE RIGHT ONE IN, even if they don’t come out and say this is a love story between two boys. The scene where Oskar and his father are spending time together and a man enters the apartment unannounced suggests this wasn’t Oskar’s first experience with same sex relationships. Even when Oskar asks Eli to “go with him” and she responds that, she’s “not a girl”, he still doesn’t seem to mind. I’m sure someone in management thought this might be too much for American audiences to stomach given the budget of LET ME IN and the need to make a profit, but I don’t think that’s why LET ME IN wasn’t a bigger hit than it was. ***END SPOILER*** 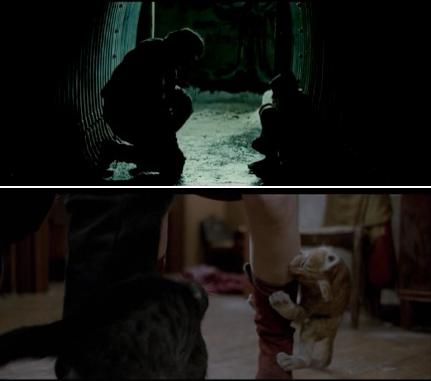 I find it interesting that CGI proved to be a detriment to both films; LET THE RIGHT ONE IN with the downright goofy cat attack sequence and LET ME IN with the CGI attack in the tunnel. Though it would have been fun in any other film, the scene where a gaggle of cats attack a newly turned vampire seems extremely out of place in LET THE RIGHT ONE IN what with the first hour of the film being such a viscerally realistic and grounded portrayal of a bizarre relationship using horror staples. LET ME IN smartly drops the cat sequence, but because this is a Hollywood film, a CGI scene is added in its place where Abby attacks a man in a tunnel in silhouette and has the same effect. So blaringly CGI, these scenes took me out of the movie immediately and are a detriment to the films as a whole. 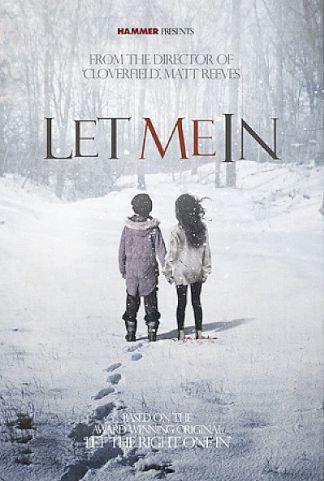