Ahoy, squirts! Quint here. There comes a time at every Sundance where I see a movie that becomes the flick of the fest. In previous years it has been titles like Once, The Signal and Hesher. Unless something better comes along in the next day and a half the title of best film at Sundance 2011 goes to Take Shelter.

There’s been a few trends at this year’s Sundance Film Festival. Animal cruelty is one, unfortunately. Another is sign language (Project Nim, Take Shelter, Perfect Sense come to mind) and yet another is a trend of underwhelming or fumbled third acts. The low budget sci-fi flick ANOTHER EARTH is one that drops the ball in the finale, which derails the movie for me and to a lesser degree Homework, a coming of age rom-com starring Emma Roberts and Freddie Highmore, kinda trips up a little in the end.

The set up is great, but it’s the kind of set up that if it isn’t handled correctly in the end just becomes another “almost there” film festival movie. I’m happy to report that Take Shelter bucks the trend and does indeed stick the landing getting a perfect score from this judge.

Michael Shannon plays a loving husband and father who begins having terrible nightmares… like wake up screaming stress nightmares… Horrible things, like his child being taken, his dog attacking him, people he trusts turning violently on him. Each one is predicated by an oncoming, horrible storm. The rain is thick and discolored, like clean motor oil and there are strange people shown only in fragments… flashes of hands, outlines of bodies through windows, etc.

Director Jeff Nichols makes a great decision to shoot the nightmare scenes exactly like he shoots the waking world stuff so there are times where you don’t realize something crazy is about to happen.

Shannon’s mother is a committed schizophrenic and Shannon is terrified that he’s experiencing early symptoms of the disease, but at the dreams become more and more frequent, as they start to overlap into reality, he begins obsessing over expanding his simple storm shelter into a real life end of days fully stocked shelter.

The great thing about this isn’t that he’s full on Roy Neary obsessed… he’s not, he’s conflicted every step of the way, torn between a gut feeling that he has to save his family from an impending doom and the fear that he’s going legitimately crazy.

When you have an actor of Shannon’s caliber playing this kind of tortured character you get one of the screen’s great performances. The dude kills in this movie… in one shot you can see his eyes go from crazy to angry to ashamed to terrified with an ease that is kind of breathtaking to be honest.

Everybody in the movie is fantastic, especially Shannon’s wife (played by Jessica Chastain, soon to be seen in Terrence Malick’s Tree of Life) who has the difficult task of being the worrying wife and mother without becoming the standard nagging realist in a situation like this. Think of Teri Garr in Close Encounters (which I keep referencing because there are a whole lot of undeniable parallels). We see her at the end of her rope, but I find it hard to fully sympathize with her by the end. I didn’t have that trouble with Chastain.

Because, like Shannon himself, Chastain doesn’t know what to think about her husband’s obsession and premonitions. Just like how most people would react in reality. Nobody knows anything 100% for sure and because the characters are so fleshed out you’re invested to the bitter end.

And as I’ve mentioned, the end delivers in spades, so the investment pays off. The result is the best movie I’ve seen at Sundance and a likely early contender for my favorites of 2011 list.

I have to give some love to Hydraulx effects for their low budget work here. Their angry storm work is fantastic and didn’t feel like digital paint blobs moving around (which you kind of expect with low budget CG work). I hear they shot 2D plates of  storm systems and integrated them seamlessly, so good work, guys.

You may be surprised to know that The Strauss Brothers are producers of this film. You’d never in a million years associate this kind of slow burn character study with the makers of Skyline and AvP 2, but count me impressed they did what they could to get Jeff Nichols’ script and directorial vision up on the screen.

Take Shelter is a fantastic movie, a taut thriller, an emotional depiction of a solid family unit fracturing under paranoia and a tour de force leading performance by one of our best working character actors. I can’t recommend this one enough. 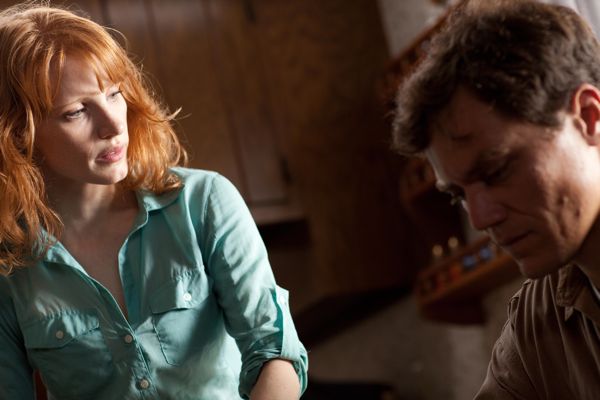