I had the opportunity to have a brief chat with True Grit’s Hailee Steinfeld and how could I pass that up? Her performance in True Grit has been compared to Tatum O’Neal’s in Paper Moon, Jodie Foster’s in Taxi Driver and Anna Paquin’s in The Piano… in other words, one of the best child performances in film history and those comparisons are earned.

A lot of it has to do with the character. As written Mattie Ross is one of the juiciest characters a young actress could hope to get. Mattie is a strict, no-nonsense girl, but still a child filled with the wonder of her young years.

But make no mistake, Hailee Steinfeld isn’t good in the role just because it’s a well-written part. If that were true I’d be head over heels with Kim Darby’s portrayal in the original. It’s a tough part, but Steinfeld tackles it with confidence and ease.

So, we talk a little bit about Mattie as a character, the audition process, her work with Jeff Bridges and The Coens. Hope you guys enjoy the chat! 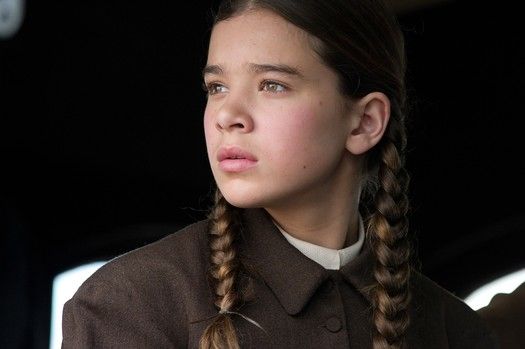 Hailee Steinfeld: Good, how are you?

Quint: I’ve seen it three times now and I love it even more every time I watch it.

Hailee Steinfeld: You’ve seen it more than I have!

Quint: Now that I know that I’ll have to make sure to keep ahead of you!

Quint: I do have a little bit of an unfair advantage since they sent me a screener of it for awards consideration, so I can watch it whenever I want to.

Hailee Steinfeld: Oh, that is not fair!

Quint: I’ve been thinking a lot about the movie in preparation for this interview and it really did strike me that so much of the film rests on your shoulders. As colorful as Jeff Bridges’ Rooster Cogburn is and as much as he’s the face of the west in the movie it really is Mattie Ross’ story. You often don’t see role like that in any film, especially for someone your age… Mattie’s complex, strong, but still innocent without being precocious. Not to embarrass you with praise, but it’s quite a balancing act you pull off and must have taken a lot of confidence to pull off.

Hailee Steinfeld: Oh, thank you! I do have to say… First of all, what attracted me to this character right away was the fact that she had such a drive. I’m a very driven person, I feel. If there’s something I’m passionate about or if there’s something I want I go for it, you know what I mean? I’ll do anything in my power to do whatever it is. I feel that is the biggest similarity between this character and myself; we’d both stop at nothing to get what we want.

This character is on such a journey and I really feel like I was on one my own as a person… you know, throughout the auditioning process, the filming process and all this stuff. It’s really crazy.

Quint: What was the audition process like for you? I’ve read they looked at over 1500 people for the role of Mattie. Was it crazy for you or was it relatively simple?

Hailee Steinfeld: Okay, so I auditioned the first week in January and I got a call back two days later to read with the casting director, Ellen Chenoweth, and then they told us at that point it’d be a month until we were to hear anything at all. It was five weeks later that I got called in to read for The Coen Brothers and during those five weeks, not knowing if I was going to get a call or not… I mean, I was going over the material, but the five weeks right there felt like five years. So, it was like a long short audition process!

Quint: I’m a big fan of older movies, especially noirs and the classic comedies where the dialogue is just delivered in rapid-fire. The way you play Mattie captured some of that, you have to spit out dialogue like a machine gun. Did you find that came naturally to you or was that something you had to work on?

Hailee Steinfeld: It was definitely something I had to work on. It was almost like learning a new language to me. You know, no contractions... That was hard. I first had to go through and make sure that I understood what everything meant and then, of course, go back and make sure I could understand what it meant to me emotionally and how I could relate to it in my own life.

Barry Pepper refers to it as American Shakespeare and I think that’s a perfect way to refer to it as. It really is, it’s almost like music, especially getting on set and listening to all the actors speak it’s almost like a song. Everything flows.

Quint: That’s actually an excellent description for it. “American Shakespeare.” I have never thought of it that way, but I like that a lot.

Hailee Steinfeld: I hadn’t either, really, until he said that. You read the script and you see that it’s so key to the whole movie, really; the dialogue. I mean the term “American Shakespeare” didn’t slip into my mind, but that’s a great way to refer to it.

Quint: Speaking of just how crucial the dialogue and dialect is to this film we have to talk about Jeff Bridges’ interpretation of Rooster Cogburn. Listen, John Wayne catches a lot of crap for just playing himself, people say he wasn’t a good actor… I don’t subscribe to that. He’s done some really great, subtle work in movies like Rio Bravo, but when you hold up Jeff’s work against what John Wayne did in the original film there’s no comparison. I think Jeff just blows him out of the water.

Quint: So we have to touch a little bit on how you and Jeff worked together because Mattie and Rooster is the core relationship in the movie. What was your first impression of Jeff when you met him?

Hailee Steinfeld: I was so blown away by the fact that I was standing as far away from him as I was, but honestly just realizing that he was there to do a job and I was there for the same reason just really made me feel at ease.

I do have to say that the best advice that he has given me is to not take anything too seriously. Of course you have to take it somewhat seriously, but have fun with it and he’s given me the perfect example of that. He’s just so humble and just so down to earth… he’s the best.

Of course, Mattie and Rooster’s relationship starts out with a kind of mutual respect that grows into more of father/daughter relationship… I do feel that onscreen connection was definitely very natural. Jeff and I had a great relationship to start with.

Quint: How much did you get to work on your characters, with you as Mattie and Jeff as Rooster? 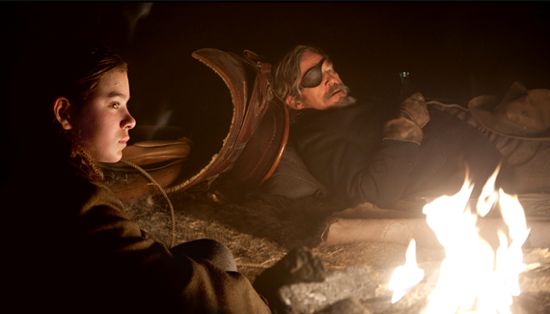 Hailee Steinfeld: We had about two weeks or so of rehearsal before we started filming and that was kind of our time to figure it out. Obviously, in the script there are no contractions and the entire time we stayed really true to the script. There was never any improvising, but I really do feel that in the rehearsals that’s where it all really clicked.

Quint: The Coens have been some of my favorite filmmakers for nearly 20 years now. How was it working with them, what was that dynamic like on set?

Hailee Steinfeld: First of all the way they work as brothers is incredible. It’s crazy just to watch the way they work. They are so calm and relaxed and organized and I feel that right there sets the vibe of the whole set.

Then you have Jeff, Josh, Matt and Barry who just have such incredible presence and they bring so much to the set… fun and humor, they just lighten everything up. It was really so much fun being off set, when the cameras weren’t rolling. It was for me a very kid-friendly environment, it was great.

They’re just so great. What’s so great about them is that they let their actors do what they were hired to do and yet they are still always there for any advice or ideas or suggestions or questions that any of the actors had and that was really helpful.

Quint: Something else I’m curious about is if you worked at all with Elizabeth Marvel who plays the older Mattie. There did seem to be a nice continuity of character. Did you get to work on that with her at all, making sure the younger Mattie and the older Mattie felt like the same person?

Hailee Steinfeld: I actually did not. We did have a few conversations in the make-up trailer, of course… She’s such a genuine person, she’s so sweet and just amazing, but no… I never really got the chance to work with her that way.

Quint: So it was all her talent on display then!

Hailee Steinfeld: Yes, it was all her! (laughs)

Quint: Had you seen the original film or read the book when you got the gig?

Hailee Steinfeld: When I first heard about True Grit I watched the original film. After I got the part I got the script and when I was on my way to film I read the book. I was so, so fortunate, as you can imagine, to have those to reference for a first job. I mean, I had a book and an original (film)… But mainly I had the book and the script and I had Joel and Ethan Coen, so I had everything I needed.

Quint: So you were able to pull more detail from the character from Charles Portis’ book, then.

Hailee Steinfeld: Yeah, absolutely. There’s little details in the book… For example, she’s an animal lover. That kind of stuff, believe it or not, really adds to the whole overall description of the character. Of course it’s something like that that doesn’t make it into the script, those little details.

Quint: So what do you have coming up? I have to imagine you’ll be in pretty high demand after people start seeing this thing.

Hailee Steinfeld: I hope so! I have nothing yet and we’re really taking it one step at a time and making sure we’re making the right choices and, of course, waiting until True Grit comes out.

Quint: Well, congratulations again on the movie and thanks for taking the time to answer some questions.

Hailee Steinfeld: Thank you very much, Eric. Have a great day! 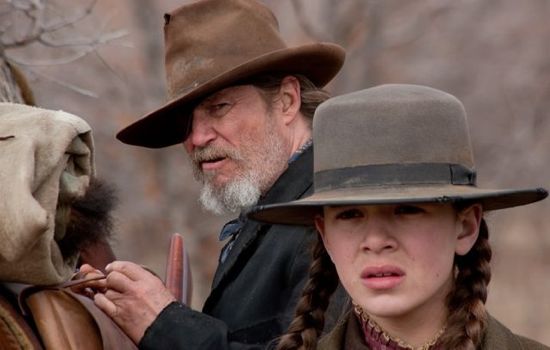 Stay tuned. I also have a chat with the brilliant cinematographer Roger Deakins to hit you with before I’m through with True Grit! It’s a fun chat with one of the masters!