AICN HORROR - ZOMBIES & SHARKS: Horror at the Chicago International Film Festival! WE ARE WHAT WE ARE & BIG TITS ZOMBIE in 3-D!!

Logo by Kristian Horn
Greetings, all. Ambush Bug here with another AICN HORROR: ZOMBIES & SHARKS column. Why ZOMBIES & SHARKS? Well, those are the two things that I’ve had the most nightmares about. It’s the reason I rarely swim in the ocean. It’s the reason I have an escape plan from my apartment just in case of a zombie apocalypse. Now if you’ve ever had those fears or fears like them, inspired mainly by nights upon nights of watching films of the frightening kind, this is the place for you. So look for AICN HORROR: ZOMBIES & SHARKS every Friday for the foreseeable future, horror hounds, where we’ll be covering horror in all forms; retro, indie, mainstream, old and new.
I started a Facebook page for AICN HORROR so be sure to check that out for all of our updates and an archive of columns.
This week I had a chance to check out two fright films playing at this year’s Chicago International Film Festival. Though different in tone, it proves that horror is alive and well all over the world. Scroll down and see what I mean…
Today on AICN HORROR(Click title to go directly to the feature) WE ARE WHAT WE ARE (2010)
BIG TITS ZOMBIE in 3-D (2010)
And finally…RECORDED LIVE!

If folks walked into WE ARE WHAT WE ARE five minutes late, one might not even know they were watching a horror film. At its core, the film is a drama about a family in crisis. The caretaker of the family, in this case, the patriarch, has passed away and the rest of the family must decide how to pick up the pieces, how to keep the family together, and how to survive. The drama that ensues is what one would suspect. Family members attack one another. There are scenes of hopelessness, sadness, and rage. All of the stages of grief are represented here. As I said, this would be your typical drama about grief, if not for the fact that this drama is occurring around a family of cannibals. 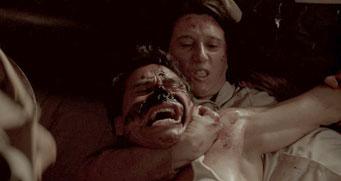 WE ARE WHAT WE ARE is directed by Jorge Michel Grau, a director who has an obvious love for classic horror. The soundtrack alone, reminiscent of the best Hitchcockian string-plucking operatic soundtracks, immediately lets you know that this is a horror film. Grau's patience as a director is the highlight of this film. He takes is time and immediately, even if this wasn't a subtitled film, you know this is a foreign film because of the time Grau spends fleshing out this family and their story. This is not a flashy film. There are no jump scares. The unpolished look of the film is what makes it all the more real and all the more powerful. This is a straight forward look at a family in a horrible situation and the horrible things they do to cope with that situation. The structure of the family is intricate and complex.

A lot of time is spent establishing who each family member is, what their role is in the family, and how they interact with one another. Alfredo is the oldest son and looks a lot like a young Mexican Jeffrey Combs, expected to take the reigns when news of his father's death appears, but he is conflicted about this role, the acts the family must do to survive, and his own sexuality. This conflict is the core of the film, as Alfredo is torn between stern expectations to step into his father's shoes from his ballsy little sister, Sabina and challenged for this role by his impulsive and easily-angered younger brother, Julian. Simmering under the radar is their mother who is completely unstable and not dealing with the death of her husband well. 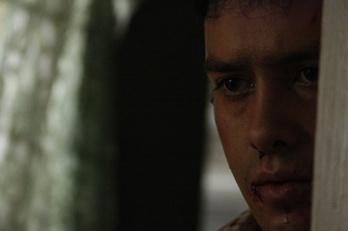 The opening moments of this film set the tone as the camera follows the family's patriarch as he makes his last steps through a neighborhood mall. Vomiting black fluid before gasping his last breath, the body is quickly whisked away and cleaned up as if nothing had ever happened. Right away, director Grau establishes that this is a horror the authorities don't want anyone to know about. A pair of police detectives set out to find out who this man is and become intrigued when a human finger is extracted from his stomach during an autopsy. They decide to investigate despite the departments attempts to cover it up. But police involvement is the least of this family's problems. The family immediately has to scramble to continue where the father left off. A ritual must be performed in order to ward off...something. I kept wondering if and when this film would derail into fantasy as the countdown toward the ritual got lower, but that's not the point of this film.

WE ARE WHAT WE ARE is about the horror of desperation and how that can shatter an entire family. Grau patiently sets up the players and takes his time building the tension to a feverish climax as all players gather. The result is an explosive finale that hits you on a visual, visceral, and cerebral level all at once. Gore hounds, fear not. There are copious amounts of blood to be shed here. I heard more than one gasp from the crowd as Sabina bites into the leg of a victim and savors the blood with deep slurps. But aside from the gore, it’s the more cerebral scenes of disparity that chills you more deeply. Scenes such as the daytime attempt to snatch a small child from under a bridge and the prostitute abduction and drop off scenes are more horrific than ten Hollywood fright fests. The song in the middle of the film sung my a woman in a subway brought chills to my spine at the genius juxtaposition of beauty and terror. The horror in WE ARE WHAT WE ARE is as relevant as it is terrifying in that it reflects the desperation many families face today and how far one Mexican family can bend before that desperation breaks them. 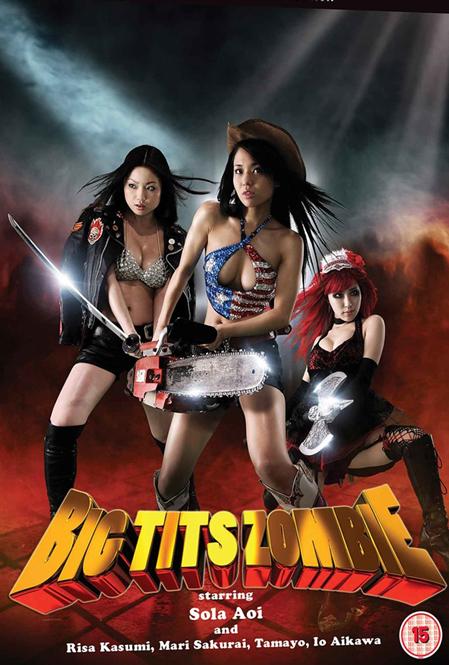 Also known as KYONYU DORAGON, BIG TITS DRAGON, & DD DRAGON
Directed & written by Takeo Nakano
Starring Sola Aoi, Risa Kasumi, Mari Sakurai, Tamao, & Io Aikawa
Reviewed by Ambush Bug
BIG TITS ZOMBIE may not have the heft of theme or sophisticated characters or expert level of directing patience and skill that WE ARE WHAT WE ARE has, but it is a whole lot of fun. I can see this film playing as a midnight movie and killing audiences looking for a good time. And a good time was had be all in the theater I watched BIG TITS ZOMBIE in. Sure these girls are no Meryl Streep. And sure the make-up looks like something whittled together in my backyard at times. And sure, these girls have a lot of trouble fighting zombies in high heels (the budget had to be tripled with the amount of sprained ankles these high-heeled hotties endured while filming). But with a name like BIG TITS ZOMBIES, you don't expect a Oscar worthy film.

The movie's plot, if you can call it that, hangs on a book found by a quartet of Japanese strippers while on assignment in a seemingly abandoned town. One of the more literary strippers (who quotes famous writers and philosophers throughout the film), decides to read from the tome and faster than you can say nipple-clamps, the dead are rising and eating the living. But in a film like this, plot is not really important. What is important can be summed up by answering the following questions;

Are the girls hot?

Are the tits big?

Is the gore gruesome?

Are the girls hot? The makers of BIG TITS ZOMBIE do a good job of knowing they have a lowbrow film on their hands and giving the concept a low, deep hug. The girls are all pretty damn hot, especially the two leads, who know kung fu about as well as they can act, but do it both in bikinis and high heeled cowgirl boots, so that shows some kind of talent. The lead hottie is pretty good at screaming the name of the latest victim when they fall to the zombie apocalypse. All in all, the cuteness of these girls make the film endearing enough to make you want to follow them every step of the way through this ridiculous journey. 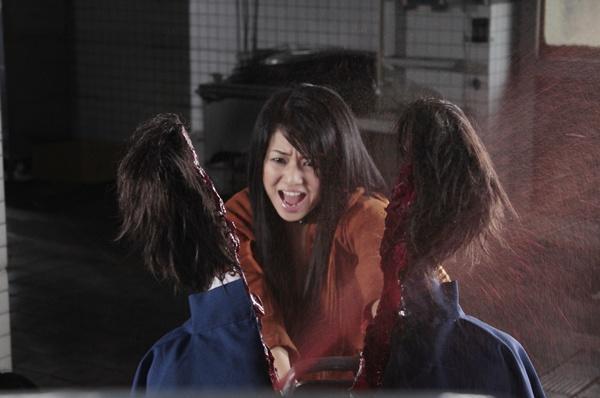 Are the tits big? I've seen bigger, but I wouldn't toss them out of bed for eating fortune cookies. But fear not, folks, there are quite a few pairs of breasts to be seen.

Is the gore gruesome? Sure. Some of the zombies look surprisingly good while others are horribly amateurish. During the final showdown, the effects get a lot better, but still retain an amateurish quality, which is sort of endearing, much like the rest of this film. More of the effects garnered laughs rather than retches. It didn't help that the movie was supposed to be about a zombie apocalypse, yet the same 15 zombies showed up in every scene, some of them directly after they'd been disposed of in the previous scene.

Is the movie fun? In a word; YES. In many words; it sure the fuck is. I dunno, there's something about scantily clad, high pitched squealing Japanese strippers that appeals to me. The film never takes itself too seriously and most of the comedy hits the right marks. I can't say that I laughed out loud at every supposedly humorous moment, but very few of them landed with a thud. There were some unintentional laughs here and there. For some reason I thought it was hilarious when one of the strippers began speaking Spanish. And again, watching the top-heavy tarts trip around in high heels was a hoot as was the ludicrous expressions many of the zombies wore on their faces. 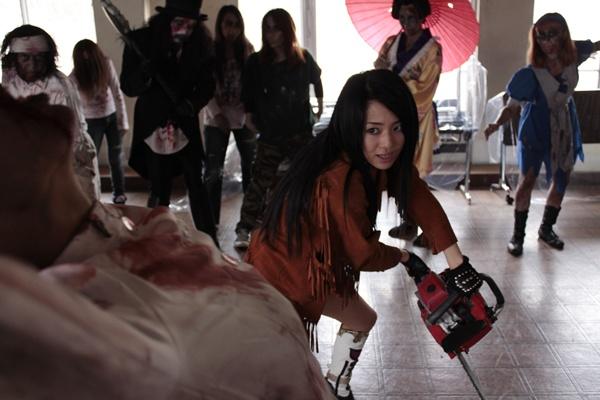 The film does have some fantastic scenes that have to be seen to be believed. All I will say is that the highlight scene for me gives new meaning to the term "fire-crotch". Touted as a 3-D film, BIG TITS ZOMBIE had some of the worst three-dimensional gimmicks since CLASH OF THE TITANS. My 3-D glasses didn't really work and gave me a bit of a headache. Luckily, only small sections of the film were in this supposed 3-D. BIG TITS ZOMBIE isn’t high art and it never tries to be. Though that could be debated. I must admit that the scene toward the end when both of our buxom zombie-killers’ bare chests are doused with blood in slow motion had me muttering to myself, "They should have sent a poet..."

And finally, who out there remembers this short from early cable? I remember it giving me nightmares as a kid…