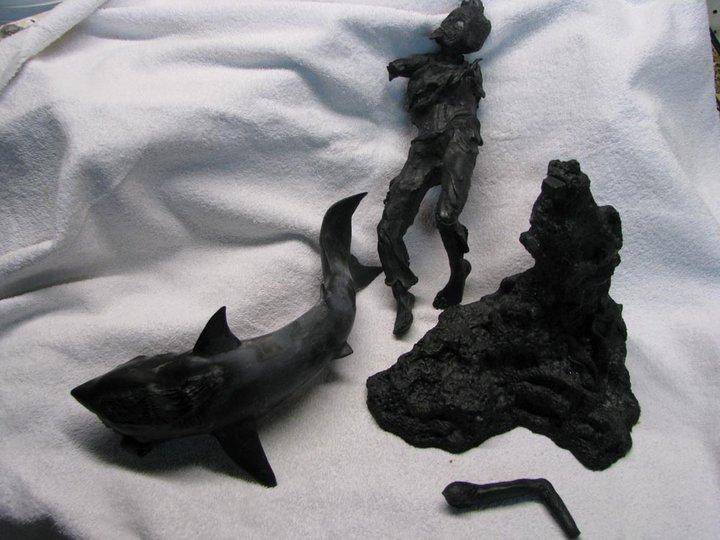 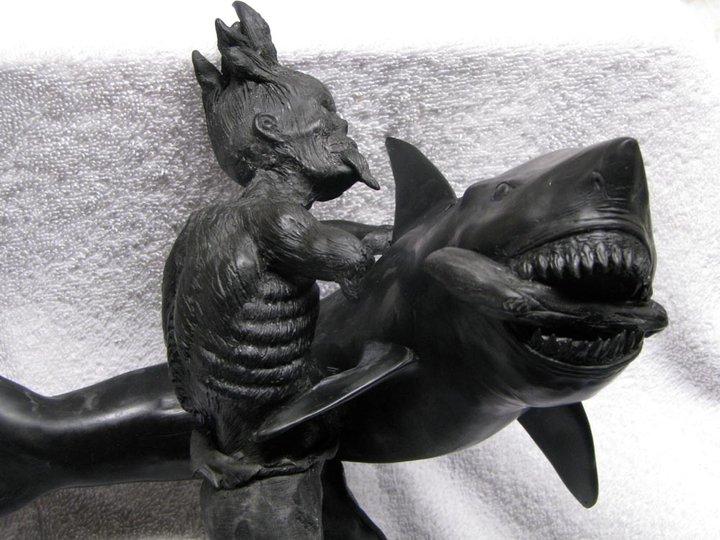 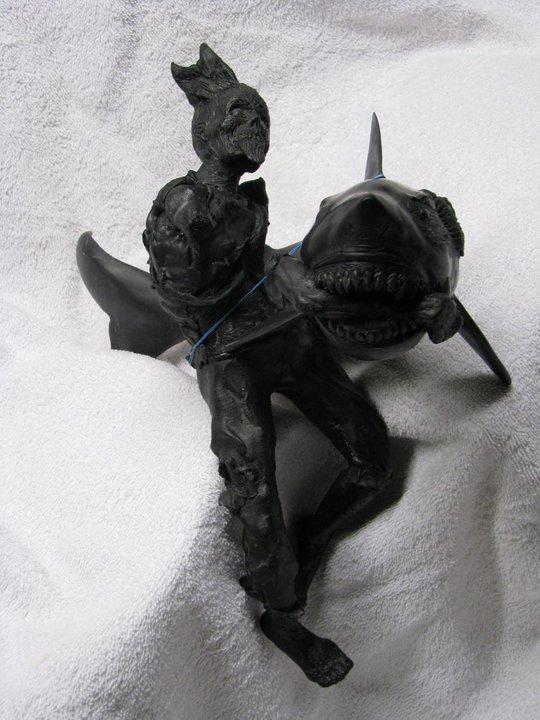 Now if you’ve ever had those fears or fears like them, inspired mainly by nights upon nights of watching films of the frightening kind, this is the place for you. So look for AICN HORROR: ZOMBIES & SHARKS every Friday for the foreseeable future, horror hounds, where we’ll be covering horror in all forms: retro, indie, mainstream, old and new. 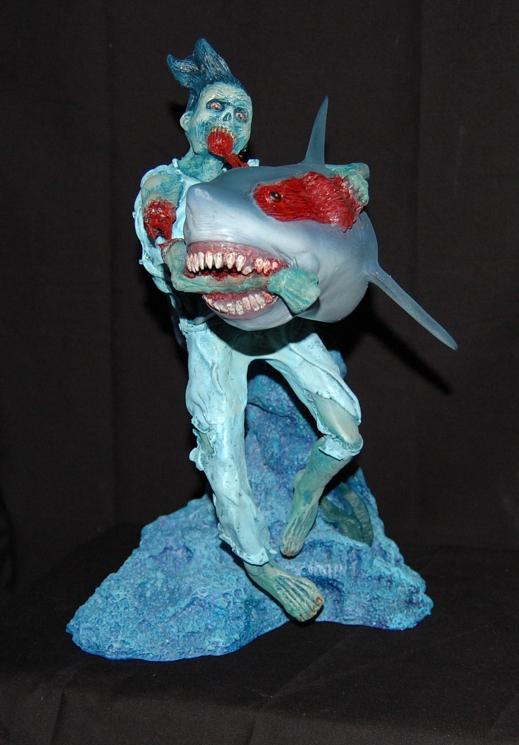 This week I have a few things to share with everyone that fall under the banner of horror, starting with a very cool sculpture a reader sent me. Rikk Roberts sent me a few pics of a sculpture he is doing of a zombie fighting a shark (Check out his MySpace and Facebook pages). It sounded like something perfect to post in this column, so he said it’d be ok if I shared it with you all. 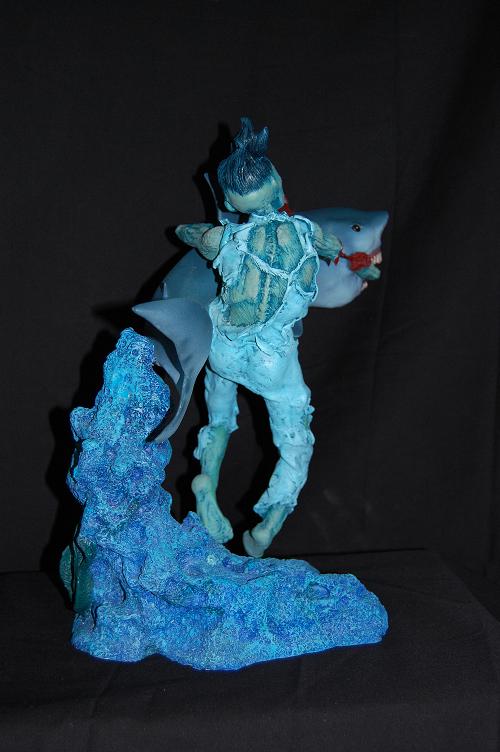 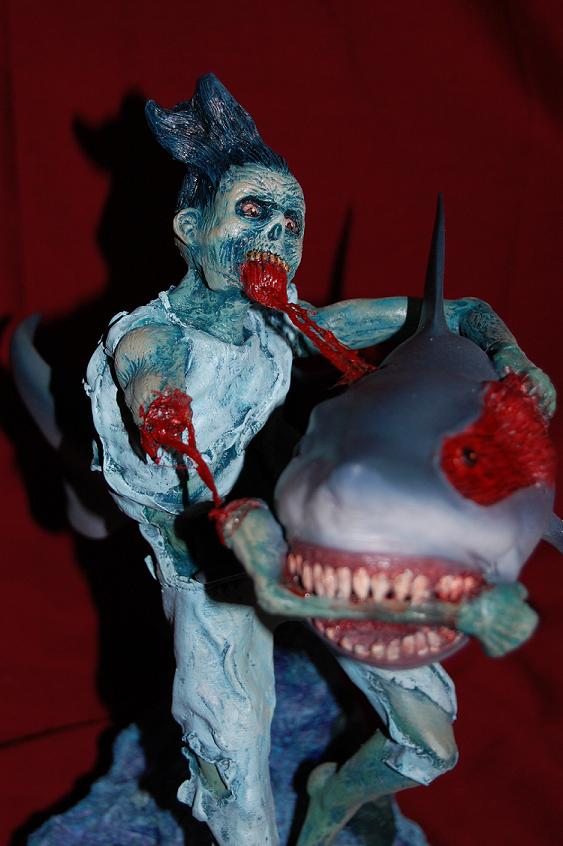 The Zombie Vs. Shark (13” x 12”) resin model kit pre-painted statue is available through Scott Kelley of Alternative Images 114 Fort Hunter Road Schenectady, NY 12303 phone: 518-355-7958 Click on the images to see them at COLLOSSAL size! Thanks, Rikk for bringing this awesome sculpture to my attention!
And now, enjoy your weekly dose of horror! 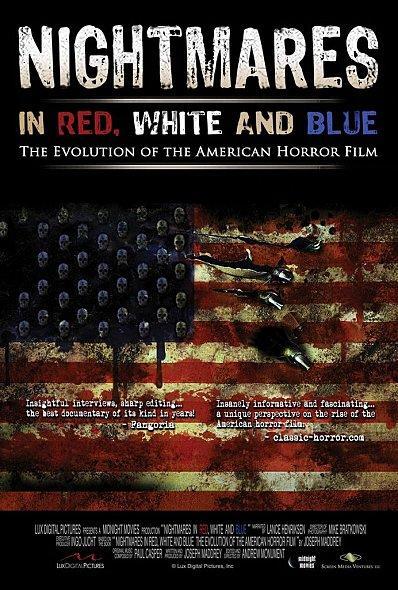 I got a ton of emails requesting some truly cool horror films you wanted to see in the column for our NIGHTMARES IN RED, WHITE, & BLUE Documentary on the last hundred years of American horror. It was tough to choose the winners. In all honesty, I will probably cover all of the suggestions some time in the future. But I had to choose only eight, so out of all of the emails, I chose the below readers and their suggestions because they are the ones that made me laugh or mutter “cool” under my breath when I saw the suggestion. Seems PONTYPOOL was a crowd favorite, so I’m definitely covering that one, so the first to suggest that was a winner. Below are the winners and the films they suggested. Look for articles focusing on these films in the coming months.

Mike Wiseman – PONTYPOOL Willie Bates – SLEEPAWAY CAMP Michael Todd – THE DEAD NEXT DOOR Sean Hall – HAPPY BIRTHDAY TO ME Emily von Seele – MARTIN Sal Rozzi – BASKET CASE Justin Ewert – TRICK OR TREAT (80’s version) Jason Hauser – WERNER HERZOG’S NOSFERATU
Thanks to everyone who sent suggestions and congratulations to the winners. Your DVD of NIGHTMARES IN RED, WHITE & BLUE: THE EVOLUTION OF THE AMERICAN HORROR FILM is on the way. And for those who didn’t win, check out why you should seek out this cool documentary below!

I haven't seen a lot of horror documentaries, but the ones I have had a chance to check out have all been pretty good. Even if the information conveyed isn't groundbreaking or insightful, at least you get a montage of horror films to enjoy and maybe you get to see one of your favorite directors or actors gab about some kind of anecdote from a classic film. Though maybe it doesn't fall under the horror documentary motif exactly, I guess the first one of this kind I saw was TERROR IN THE AISLES. Though I haven't seen the film in a while (may have to revisit it some time), I seem to remember loving the clips, but loathing the lame comedy interludes from the likes of Dan Akroyd and Cheech and Chong. Instead of making an "I Love the 80's" style drek-fest, the makers of NIGHTMARES IN RED, WHITE & BLUE: THE EVOLUTION OF THE AMERICAN HORROR FILM have relied on some of the most influential and educated gents in the horror film genre to talk about their love and knowledge of horror. 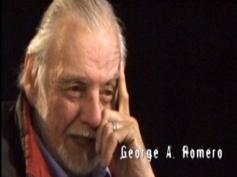 First and foremost, this is a horror documentary by a horror fan about horror. Assembled is a group of people who not only make horror, but understand its importance and the impact it has had on society and how horror reflects the way of life occurring at the time. At the same time you get a feeling that this cast of filmmakers and aficionados really love to talk about horror. Roger Corman is subdued, but passionate. Joe Dante, Larry Cohen, and Mick Garris smile as they talks about memories of their first horror film experience. John Carpenter gets philosophical on a theme of the fear of the other and the fear of oneself. And George Romero, as usual, seems to be filled with glee while talking about both his own films and the ones made by others. Edited and directed by Andrew Monument, NIGHTMARES as at its best when it lets these elder statesmen of horror take the mike and run with it. There's a respect for these guys in the time given them to talk that someone who isn't in love with the genre would never allow. I can imagine an MTV produced special, edited all to hell and soulless. This isn't one of those documentaries. 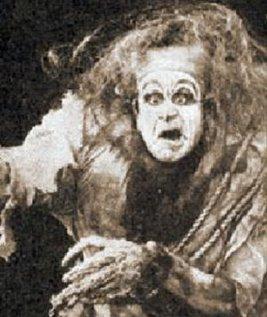 The film starts out discussing the box office failure of Thomas Edison's version of FRANKENSTEIN and ends in the here and now, as America both fortifies its borders and makes the outsiders from other countries the enemy after 9-11 and also opens its acceptance of foreign horror films as technology to make films becomes easier for those outside of the US and the accessibility to watch those films becomes easier for more Americans. If you've taken horror film classes like I did or read up on your horror literature as I often do, you may not be bowled over by the themes discussed in the opening hour of this film. Many essays and books have been written on how horror and sci fi films reflected the eras of the atomic bomb, WWII, Viet Nam, the civil rights movement and other influential decades of our nation's history. But not many package them together so successfully and tightly as this documentary does. 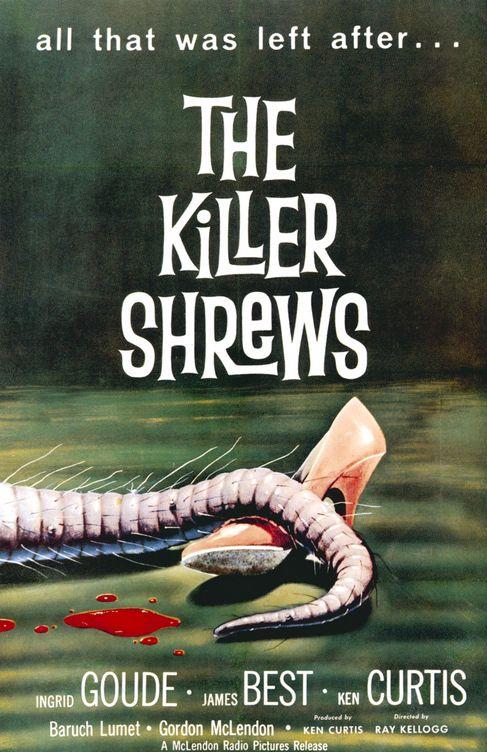 The thing that this film does do is highlight how horror is really a reflection of what is going on at that particular time and NIGHTMARES is the most effective, of course, when it touches on themes of today such as xenophobia, politics, and other modern problems. I could see this documentary being shown to film classes in school as a means to spark discussion and debate in the classroom. I'd love to watch this film with my film-loving friends and chat over beers and bar food. This is the type of doc that makes you think and ask questions not only about the films we love, but the world we live in.
Apart from all of the high-brow stuff, there are plenty of film clips to enjoy from mainstream to obscure films. I could see someone watching this film with a pad and paper, taking down films that they should check out solely from the cool clips shown. Sure everyone has seen clips from JAWS and THE SHINING, but how about KILLER SHREWS? I've seen a lot of horror films, but even I was surprised at how many I put on my must watch list after viewing this film. Each subgenre is represented here: Universal Monsters, psychedelic films, slasher pics, sci fi horror, remakes. You name it, it's at least touched upon. 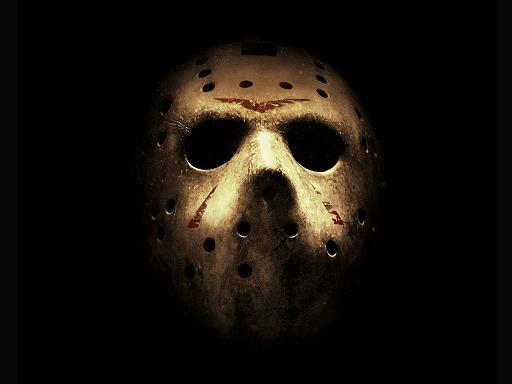 There's even a very cool montage of the FRIDAY THE 13TH films set to music that any fan of the series must see compiling all of the sex, drugs, and violence the filmmakers can squeeze into a few minutes. The documentary also does a great job of breaking down some of the politics of horror films, especially FRIDAY THE 13TH films for having the terror of the film (Jason or add your favorite slasher here) representing a staunch morality bearing down on a rebellious and deviant youth culture. The film also points out the hypocrisy of conservative groups who fought against the slasher film in particular since most of the films of that era were moralistic cautionary tales that punished those doing drugs, having premarital sex, and living a more liberal lifestyle. 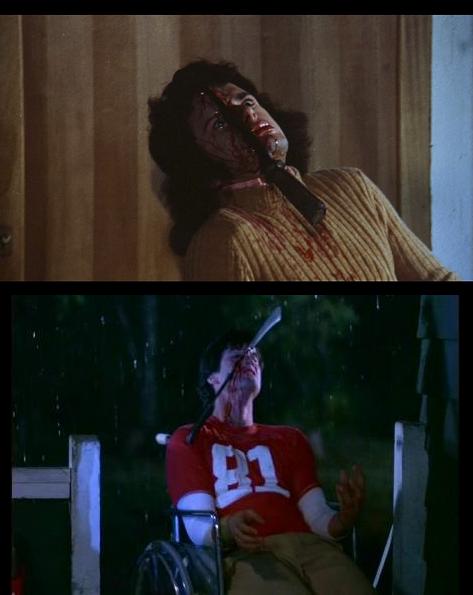 If NIGHTMARES fails in any sense it's in crediting foreign horror for a lot of influence on American cinema. Focusing on American horror is a worthy subject, but horror is so much bigger than America alone. When talking the history of horror, you have to mention Hammer Films, the German Expressionist experimentals, the schlocky Spanish flicks, the giallo horror of Italy, J-Horror, the Neo French movement, the recent trend of Serbian horror porn; the list goes on and on. I mean, talking about HALLOWEEN without mentioning Canadian-made BLACK CHRISTMAS is kind of hard. Or FRIDAY THE 13TH without crediting Bava’s TWITCH OF THE DEATH NERVE (aka BAY OF BLOOD). While references to Hammer and Murnau are made, the documentary speeds by them to focus on their American counterparts. I have to credit the filmmakers for being so focused, but I'd love to see a follow-up to this film focusing on horror outside of American borders.
One other slight beef: no Ed Wood? Really? I know this doc can't cover all American filmmakers, but you'd think a mention would be in order. I did appreciate the lengthy talk about William Castle's films, especially THE TINGLER, but if you’re going to talk about Castle and H.G. Lewis, Wood should at least be mentioned. 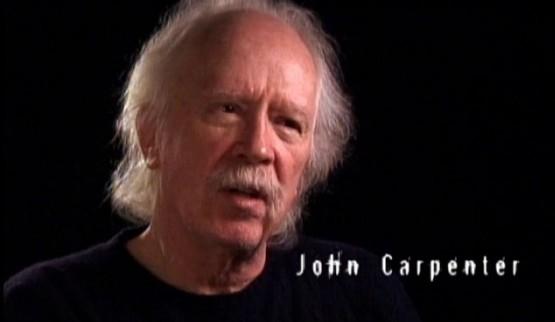 But America is very much like that, focused mainly on themselves. I found the most fascinating theme explored was John Carpenter's anecdote about the two types of horror films. In these documentaries, there's often a guy saying "There's two types of horror films..." and then the guy tries to say something smart. Well, I'm sure it can be boiled down to other pairings, but John Cartpenter's hypothesis that film is either about the horror of the other (the thing outside in the dark waiting to attack those around a campfire) or the much more complex concept that the horror is inside us (the thing is sitting amongst the campers at the campfire). This notion encapsulates just about every horror film I can think of. Carpenter and this film also points out the cyclical nature of horror films citing the rise of xenophobia movies during wartime and comparing the films of the Viet Nam era to the post-9-11 constant state of war we've been in for a while now. Fascinating stuff.

Narrated with the gruff and grumbling voice of Lance Henriksen, NIGHTMARES IN RED, WHITE & BLUE is a must for any fan of horror. It's available now and if you weren't one of the lucky ones to win a copy of the DVD, you should really seek it out. It's got tons of clips from some of the best horror America has ever produced, insightful and intelligent comments from some of the top directors, writers, and critics in the biz, and is edited in a way that allows the speakers to speak and won't trigger an epileptic seizure from too many quick cuts. NIGHTMARES IN RED, WHITE & BLUE is in stores now!


And finally, I know this is a little old, but I can’t help but plant this song deep into your brain matter. I know, I’m a sadistic fucker…