UPDATED with new information!!! Very Cool Pics From Russian Newspaper 'Ogonyuk' on LORD OF THE RINGS

I've been hearing reports coming from the Australian press that there are problems on the set of LORD OF THE RINGS. It seems that the press down there have heard about some alleged budget problems concerning the effects budget, and they've begun going with rumors about how NEW LINE is pulling the plug on the second and third films till they get money in pocket from the first one. That the whole ball of wax is falling apart. That there are cash shortages and blah blah blah....

As in all press bullshit, there are some undigested kernals of truth festering amongst the irresponsible speculative dung. The original effects budget has recently been estimated as being a little more than $7 million dollars higher than originally quoted. Of course... the original effects budget was quoted when the 2nd and 3rd scripts were merely in the writing stages, so this was merely the estimate... However, this is not a breaking issue. New Line is not stupid, a boost in budget of $2.3 million per film is a drop in the bucket. And they know that when push comes to shove they need to pay to get this right.

I contacted some of my sources at both New Line and Weta and began a dialogue about what is going on right now with the films. New Line is holding off on paying Weta till they get a final budget and are satisfied that they are full steam ahead... But folks... Weta's main work doesn't begin for months still.

As for the nonsense rumors about Lucas taking potshots at the effects quality that WETA can accomplish and handle with this film. Well... I've seen MASSIVE (the software that will allow the creation of the giant 400,000 strong orc armies) and it is... far and away.... Vastly superior to any ILM work along similar lines that we've seen thus far. The creature designs I've seen... like Gollum... are soooo much better than anything I've seen come from the latest STAR WARS movie... The difference is... this character has lived, you can tell he was once something else and has over a tortured existence been transformed into this sad and pathetic residue of a Hobbit. I've seen motion tests on the Cave Troll and once again... the effects work is top of the line. Personally, until I actually hear Lucas taking potshots at the production, I won't believe it... But George... be forewarned about casting stones at that which you have yet to see... The work is groundbreaking. Peter and WETA are using every trick in the book written by Willis O'Brien, Ray Harryhausen, the ILM-ers, Phil Tippett, and on. Plus... they are inventing new tricks that are amazing.

The word over at NEW LINE is that they have been very very very very happy with the dailies that have been coming in from New Zealand. Folks... This is the sort of grumblings of uncertainty you can expect over the course of the next 2 years of production. However... it's bullshit. The movie is moving full steam ahead and New Line is not fucking with anything. Now... onto the story I had up previously.....

Hey there all my friends. To me... there is something absolutely beautiful about the internet when you can get spy photos of the set of LORD OF THE RINGS in a weekly mag in Russia the day it hits the stands in Moscow... The world has changed so much, and that is so cool. Not only that, but Yuri here has translated the article from the original Russian to English for us, as well as providing the pics... Quite lovely too. The last one you've probably seen... the others are new to me though... 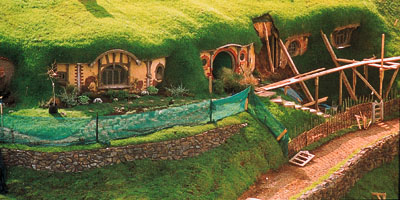 I don't know how many Russian fans of your site are there, so if you already had this forwarded to you - sorry. The Russian language weekly "Ogonyok" ("Little Flame" - I know, it's a stupid name, a throwback to the Soviet times) prints a small blurb about LOTR this week, with 4 photos of Hobbiton - and only one of them, AFAICT, was featured at your place. Pictures are way cool, though the article itself is mostly drivel. Here, anyway, is the approximate translation:

Here's the article itself (in Russian) 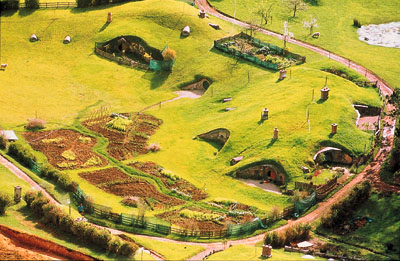 It's hard to say what exactly was so compelling about a simple tale told by J.R.R. Tolkien, but it is precisely that book that is considered the foundation of the cult genre of Fantasy. Fairytale epic trilogy "The Lord Of The Rings" was first published in 1954 and immediately became a bestseller. That book beget the movement sometimes referred to as Tolkienism. After almost 5 decades, "Lord Of The Rings" remains the Holy Book for millions of Fantasy fans.

When this entire tale started, nobody knows for sure. The most literate say that it began 45 years ago, when Tolkien wrote his trilogy. Tolkien himself, on the other hand, mainained that the story that he related is at least 7,000 years old. Anyway, the creations of his imagination - little hairy-footed creatures, hole-dwelling hobbits - have long since found their place in many a mind. Along with stupid goblins, beautiful elves and other inhabitants of magical worlds created by the English writer and philologist. 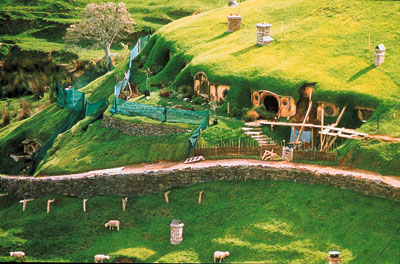 Six months ago a score of workers came to New Zealand dunes. They dug immense burrows, paved long corridors with green tiles and rugs and hung doors opening to the inside. In short, they built real hobbit dwellings. Don't think, though, that those were some deranged Tolkien fanatics. On the contrary, they were absolutely pragmatic people, with perfect understanding of ends, ways and means. And the means they had in abundance. All the construction is for the shooting of the new super-blockbuster, which is designed to lay waste to Lucas's "Star Wars" with the greatest of ease, according to its creators.

Indeed, the budget for the screen version of the famous trilogy is huge, almost unprecedented: $190 million! Only "Titanic" cost more. (HARRY NOTE: OF COURSE THIS IS FOR THREE [3] MOVIES.... SIGH)It looks like the investors' expectations will be fulfilled in spades, though - the shooting is overseen by a renowned producer, Oscar winner Saul ("One Flew Over The Cuckoo Nest", "Amadeus") Zaentz. A man like him doesn't usually waste money.

The filming has started two weeks ago. It will be a trilogy, just as the book itself. Of course, to spend this much money one needs a lot of time, so by the Hollywood's standards the movie will be slow coming - the first installment is expected only by 2001.

So for now, we'll just reread the old man Tolkien, sharpen our wooden swords and wait until the make-believe holes and props become available after the filming, so we can maybe inhabit them and continue the great Battle - the Battle of Good vs. Evil, which, as they say, began over 7,000 years ago. 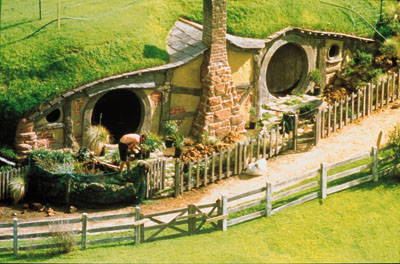