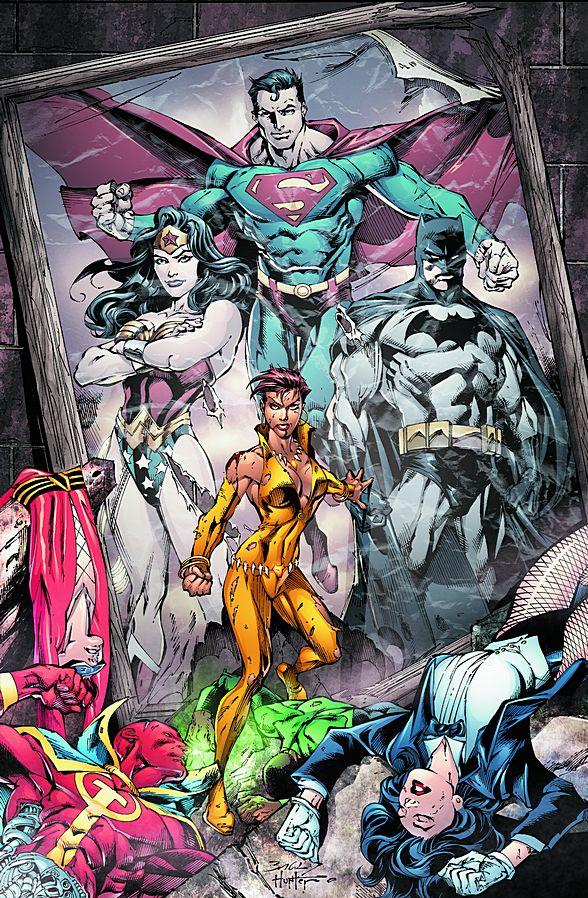 Greetings, Professor Challenger here. While Bug is sunning himself in SDCC, the rest of us @$$Holes are still hard at work. I had a chance to talk with James Robinson about his recent run on JUSTICE LEAGUE OF AMERICA. Here’s what Mr. Robinson had to say.
PROFESSOR CHALLENGER (PROF): First of all, as someone who jumped onto the current JLA book when you came on it, how long do you plan on staying?

JAMES ROBINSON (JR): I have a lot of ideas for arcs and stories. How long exactly? Not sure, but I counted out my ideas and realized I have about three to four years worth of stories. Whether I tell them all depends on how the readers respond to what I'm doing of course.


PROF: Your style of writing is one of various dialogue narratives throughout the book. In fact, many times you have 2 or 3 or more commenting on the action in their heads. It's an interesting approach (and in a handful of active sequences potentially confusing as to who's "voice" I'm hearing) and from a technical standpoint I am curious about your thought process in deciding to approach this series in this way, say, rather than just the standard omniscient narrator and dialogue balloons for the reader. 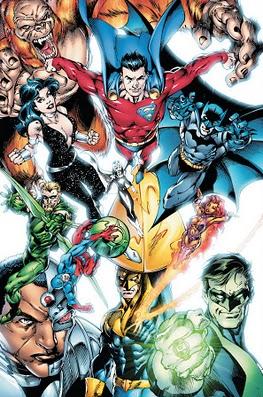 JR: I wanted to try something different. I wanted something that would help to identify these JLA adventures as mine. I don't agree they're confusing, in that we take a lot of care making sure the captions are sufficiently different. I hope they're clear enough, anyway. I like the way the captions afford me the opportunity to show ironic contrast between what one character is thinking and another. I know some readers don't like them, but others do. I'll continue with this approach for the time being at least.


PROF: Can you share a little about the creation process between you and artist Mark Bagley? Do you just send off the script and a few weeks later are pleasantly surprised by what you see or is there more communication and collaboration here between the two of you?

JR: It's some of the former and some of the latter. Yes, it's a full script, but Mark and I talk often about this idea, or that visual. It definitely feels collaborative.


PROF: Speaking of Bagley, in that first arc where you featured, I guess I would describe them as, a twisted villainous version of the core New Gods characters, did he design the look for the new characters on his own or did you already have in mind the look? 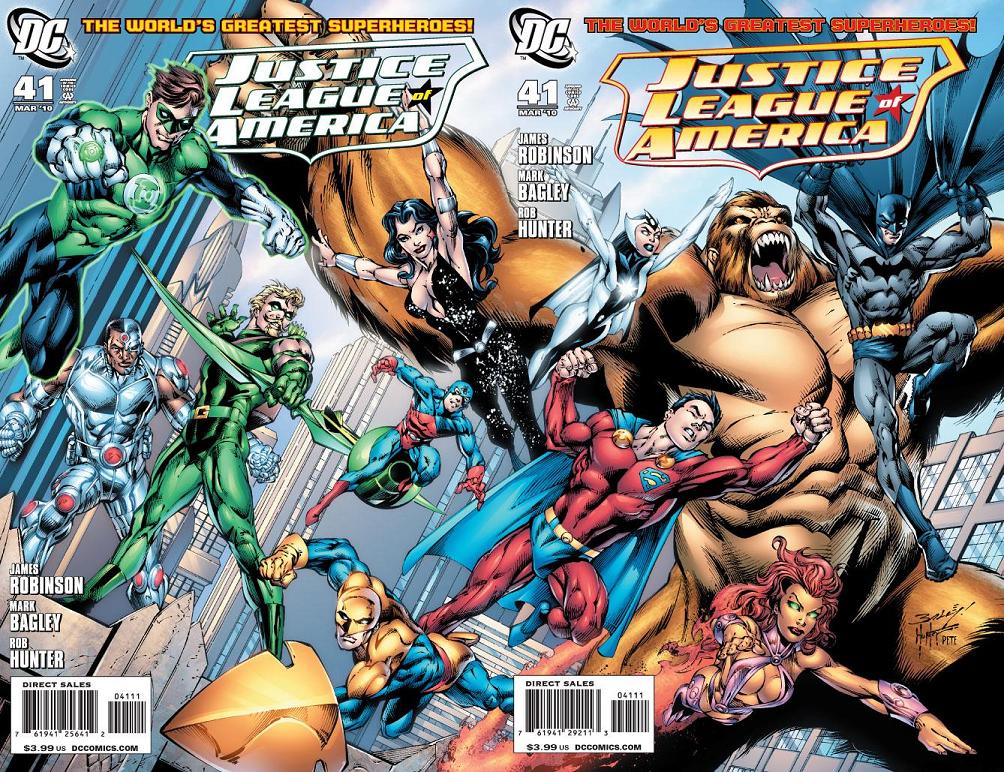 JR: I gave him some thoughts on their look, but Mark then went off and came up with his own take on them. I'm particularly partial to the design of Hunter the villainous version of Orion.


PROF: It seemed to me that after the first story arc that your planned line-up for the book somehow got intruded upon...most notably the removal of Green Lantern, Green Arrow, Starfire and Mon-El. Was that always part of your plan for the book or did events in the other DCU titles dictate their removal from the team?

JR: The JLA is a book that must always allow for the events of the DCU proper that are going on around it. Yes, I did have the rug pulled out from under me, by having this mass exodus of characters happen due to events in other books. I confess I hated losing Mon-El. But in the end I think the book is better for it now, with the team having a better core group and I get to use Supergirl who I'm having a lot of fun with. You can bitch and moan about these kind of things, or you can get on with it and try to work with what you have.
And some characters you haven't seen the last of. You'll definitely see more of Cyborg and Dr. Light in the future. Incidentally Dr. Light has become a favorite of mine, even though I haven't written her much. 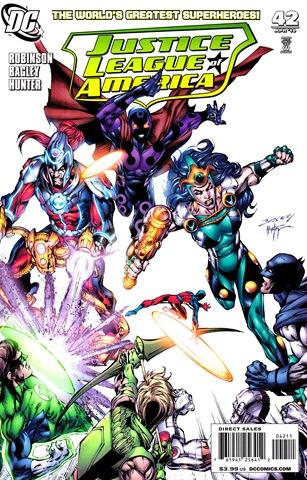 PROF: To me, one of the aspects of the DCU that connects with me is the legacy aspect of the heroes. JSA was the first series to fully embrace that concept, but your approach to the JLA seems to be a legacy-based approach, which I fully endorse at this point. This develops a JLA that truly is the first adult next-generation membership for a Silver Age team (Batman/Dick Grayson, Donna Troy, Jade, Jesse Quick, Supergirl). Is this an intentional plan on your part to establish a new legacy team or is this just a nice synchronistic result?

JR: Absolutely. It was something that Geoff and I came up with as we planned what the future of my JLA would be. I like that these characters have graduated to the big time. I like the legacy aspect, that while definitely that, somehow feels different to me from the legacy feel of the JSA. I think you'll see more of that playing out too in the arcs to come as we witness the heroes interacting.


PROF: Congorilla has become a favorite character for me. His old-school attitude and "seen it all" steady hand is surprisingly effective. But this is not a character who's really ever been one known for actual "super-heroics." What drew you to such an obscure character and this desire to put him face front like this (not to mention adding in a few powers we've never seen before with his character)?

JR: He was a holdover from CRY FOR JUSTICE. He's definitely a concept you either love or hate. I love the fact that there's a giant magical golden gorilla in the JLA. I'm also happy I've given him the ability to grow in size too, it allows me to have him be King Kong when he has to be. As the series progresses he'll be dropping references to things he's done in the past. Never in a chronological order though. However by the time I'm finished, any reader who cares to will be able to go through all these references and put them in order and get the life story of Congo Bill. I'll say now that he was born in Scotland in 1895, the son of a gamekeeper. 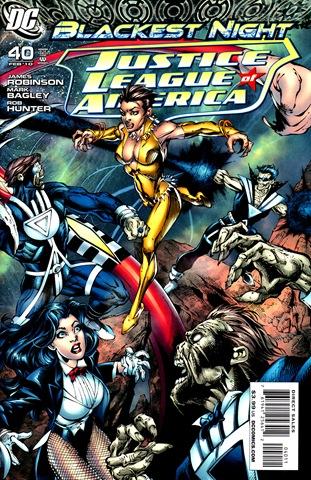 PROF: Similarly, of all the "Starmen" to add to the team, why this version? What about Mikaal made him seem right for the JLA but not any of the other potential "Starmen"....or even a new version?

JR: Why Mikaal? After Jack, he's the one I've had the most dealing with. Mikaal had appeared in one issue of FIRST ISSUE SPECIAL before I came along, so all his character development is mine from my run on STARMAN. I like the fact that he's gay, and without making it into a huge event, I'm going to enjoy giving him a new relationship when the time is right.


PROF: Do you have any thoughts on the appeal of the "Starman" name and why it has been utilized so much?

JR: It's a golden age character that I was lucky enough to get my hands on at a time when no one had thought to create a legacy out the name. Yes, there were a lot of Starmen before Jack Knight, but for some reason the idea of linking them up hadn't been done up to that point. I got to do that. As you say, legacy characters are a part of the DCU.


PROF: The current JLA/JSA team-up deals with Jade's return. What is it about the interaction between these 2 teams that you find particularly interesting as a writer?

JR: It was challenging, I will say that. From having my team reduced to a more manageable amount, I'm suddenly swimming in characters again. It's been fun though, mixing this old team with so much history and the new JLA whose history is just beginning. I've definitely enjoyed the challenge of giving every character his moment to shine. 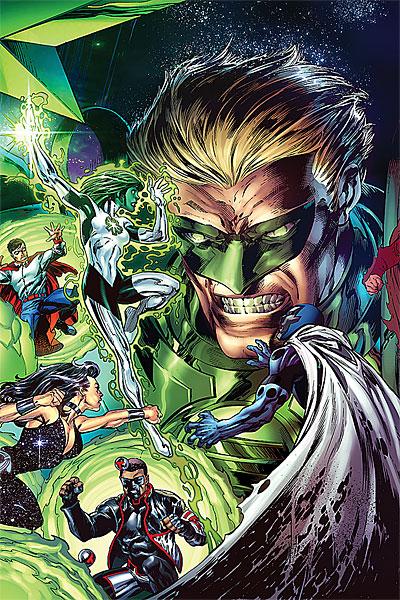 PROF: Are there going to (once again) be changes made to Alan Scott/GL that may lead to a new role for him? I ask because it seems that every few years someone decides that Alan is redundant and mess around with him and then a few years after that someone decides he's not redundant and returns him to his rightful position as Green Lantern. :)

JR: I don't want to say too much here. Suffice to say he will have a new role within the DCU, while at the same time he'll be returning to his roots more as well. I think fans who might feel he's lost a sense of direction apart from being one of the dwindling "old guard" will like this direction for Alan Scott while fans of classic Alan Scott/Green Lantern will also like his place in the DCU after the “Dark Things” arc. I will add that Alan Scott is my favorite "golden ager", so I only want the best for him.


PROF: Is Dick going to allow Damian to assume a role in this new JLA, as opposed to Bruce's obvious reticence at including Robin in the JLA?

JR: One of the things I like about Damian is that no matter what Batman wants there's a degree where Damian's going to do what he wants instead. Frankly, I don't know what Grant Morrison's plans are for Damian after Bruce Wayne's return, but if he's around I'd love to have him interact with the JLA at least a little bit. 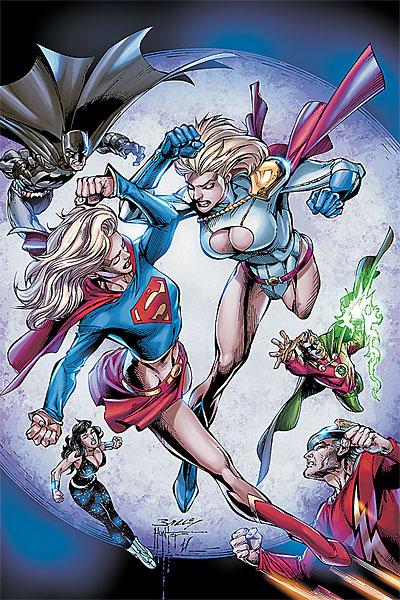 PROF: Ultimately, when the pendulum swings again and the basic Big 7 reestablish as the JLA (hopefully not for awhile), do you see your current version continuing on as a team in some other capacity? Or is that too far ahead to even speculate?

JR: That's a little far off to say. This team will be around for a while.


PROF: Finally, is working on the JLA tickling your creative bone to do a THE SILVER AGE mini-series sequel to THE GOLDEN AGE? :)

JR: I was developing the SILVER AGE with a big name artist and for one reason and another it didn't happen when it should have. Since then between Mark Waid's JLA YEAR ONE and especially Darwyn's Cooke's NEW FRONTIER, the story I wanted to tell has been told and by better and more talented guys then me.


PROF: Thanks for your time and your work! And thanks again for signing my well-worn copy of THE GOLDEN AGE #1 at C2E2.


PROF: Look for Mr. Robinson every month in JUSTICE LEAGUE OF AMERICA.

“Prof. Challenger” is actually Texas graphic artist and lifelong reader of comics, Keith Howell. He really digs Green Lantern, most recently completed the cover art for the upcoming book THE WORLDS OF PHILIP JOSÉ FARMER, and has contributed award-winning art, design, and editing to a number of books and magazines. He occasionally updates his website at at profchallenger.com and welcomes feedback from readers, both pro and con, but if female please include an attached pic in a tasteful state of undress. Thanks for all the fish.