@’s by Jason on WEREWOLVES OF MONTPELLIER!!! 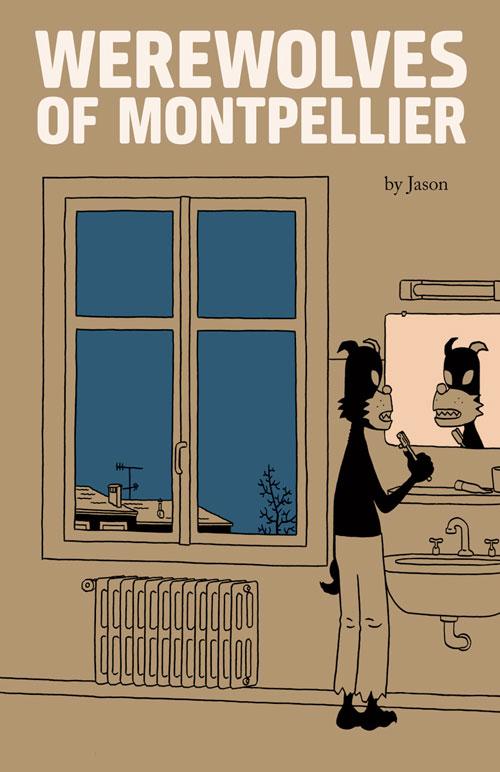 Hey folks, Ambush Bug here. Looking for the column? We’ll have a fresh column for you guys tomorrow. We had to have some of the @$$holes thumbs surgically reattached due to a wicked-mean sparkler fight at @$$hole HQ this weekend.
But fear not, we’ve got something special for you today; an interview with one of the best indie talents out there today and someone who’s work I’ve been reading and admiring for a long time; the writer/ artist known simply as Jason. It’s not often that one gets to talk with a hero, but that’s just what I did a while back when I got to chat with the enigmatic and extremely talented Jason, a Norwegian writer/artist whose books are often hard to describe and even harder to forget after reading. Some of my favorites of Jason’s were his most recent works I KILLED ADOLF HITLER, LOW MOON, and THE LAST MUSKETEER. Some of you who are more mainstream savvy may recognize Jason’s work from Marvel’s recent STRANGE TALES miniseries where they let indie artists loose on their cast of characters. Jason’s contribution (a Spider-Man tale) was one of the best. But the reason for this interview is Jason’s most recent work, WEREWOLVES OF MONTPELLIER, a book I reviewed here and one I will reread many times before it earns a reserved space on my book shelf. Here’s what Jason had to say about WEREWOLVES OF MONTPELLIER available from Fantagraphics Books in July. 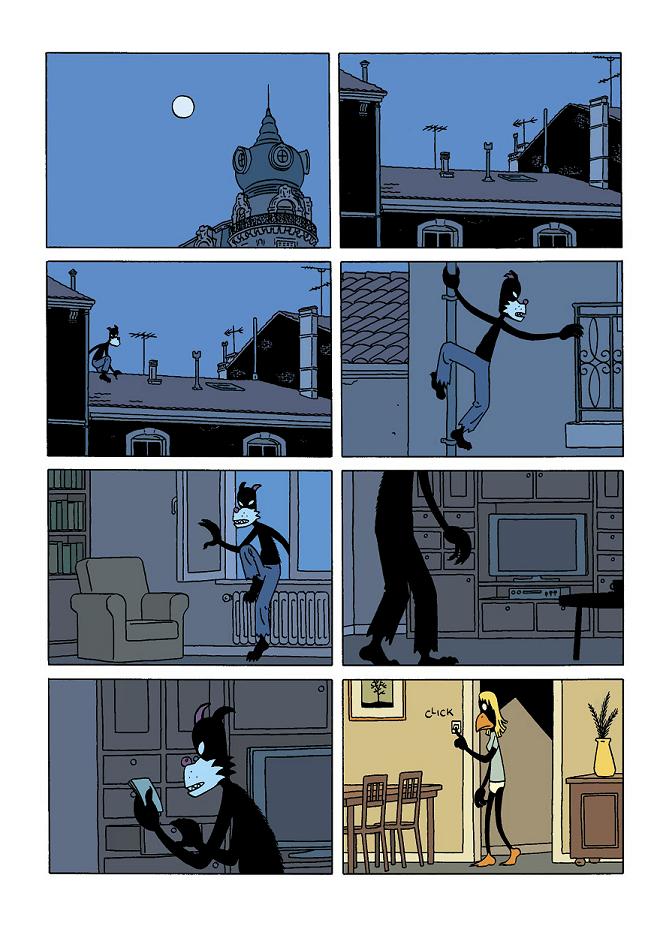 AMBUSH BUG (BUG): Having read quite a few of your books, I have to ask first off, how did you come up with your anthromorphic designs of human animal things that star in our books?

JASON: The wolf in the Little Red Riding Hood cartoon by Tex Avery was an inspiration. The characters in my stories have a different head shape, but I think that's where the look comes from.


BUG: Growing up in Norway, do you get American comics? How were you introduced to the comics medium?

JASON: There were American comics translated into Norwegian. Batman, Superman, SpiderMan and Fantastic Four. Donald Duck was very popular in Norway, published as a weekly magazine. And there were also French and Belgian albums like Tintin, Lucky Luke and Asterix. This was in the 70s, so reading comics and going to the movies every Sunday was pretty much it. There wasn't much else to do. 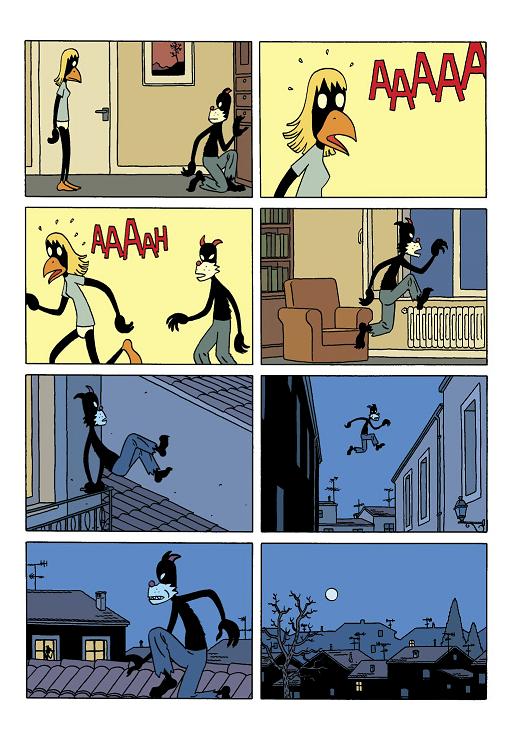 BUG: What led to your decision to make comics and how did that come about?

JASON: I never made a decision to be a cartoonist. That was not an option when I grew up in Norway, where there isn't much of a comics industry. I ended up in art school, and after graduating the plan was to be an illustrator and for the comics to be more of a hobby. Then slowly I started to make more money from comics than from illustration, and now I almost exclusivly do comics with only the occasional illustration assignement.


BUG: Your comics tend to take inspiration from other forms of media, specifically the silent cinema. Are you a fan of that era of films?

JASON: Yes, I like film. I probably spend more money on dvds than on comics. I like all kinds of genres; science fiction, western, film noir, but mostly old films, from the 20s to the 80s. Silent movies I enjoy too. “Steamboat Bill” by Keaton is probably my favourite, but I also like Harold Lloyd and Laurel and Hardy. I have a bit more mixed feelings about Chaplin. His movies seem more dated somehow, but I still like some of them. 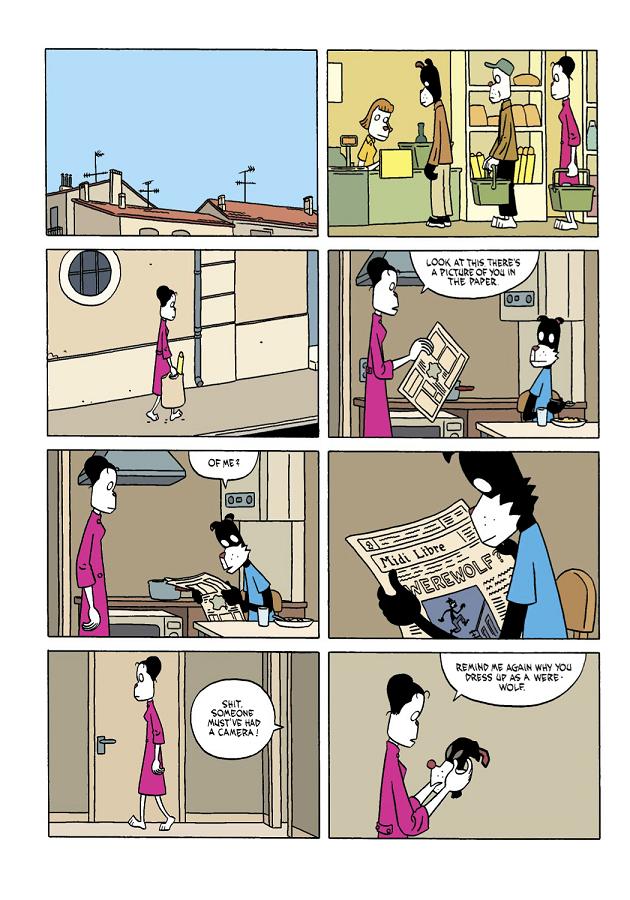 BUG: WEREWOLVES OF MONTPELLIER was one of my most favorite reads so far this year. Can you tell the readers a bit about the premise?

JASON: It's about a Scandinavian guy living in Montpellier, France. He commits burglaries dressed up as a werewolf. One time he's caught in the act and photographed, the picture ending up on the frontpage of the local newspaper. It's seen by two real werewolves who are not too thrilled about an imposter. That's the opening, but it's not really about werewolves.


BUG: So how do you sell an editor with an offbeat premise like this? Are you to the point in your career yet that you can convince just about any editor to back your stuff no matter how offbeat?

JASON: I didn't find it to be so offbeat. Actually, I thought this would be one of my more commercial albums. I never check with an editor before doing an album. I just finish the thing and send it off; here it is. I don't know if that is a good thing or a bad thing. 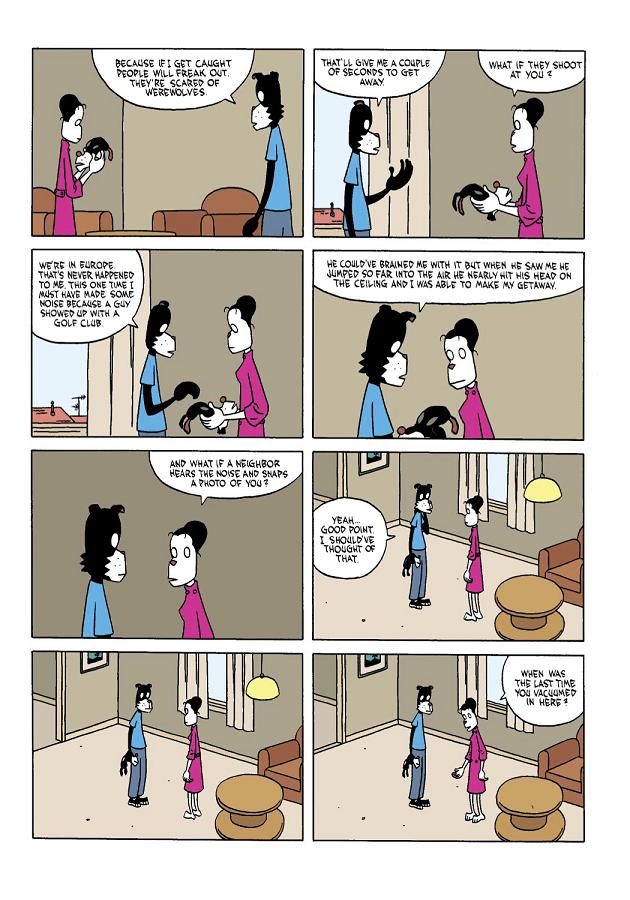 BUG: There's a huge contradiction between the whimsical look of your characters and the extremely heavy themes in your stories. Can you elaborate a bit on that dichotomy?

JASON: It's not planned really. It's not something I decided beforehand, that the dark themes could be more effective with goofy looking animal characters. But I think that might be the case. You can sort of sneak in things.


BUG: I don't think I've ever seen someone smile in your books. Did I miss one? Was that intentional?

JASON: I think there's a smile or two in this album. But yes, I find it to be more effective for the characters to be more deadpan, to not show emotions. Then the reader will have to put his own emotions into the story. That's the theory, at least.


BUG: Why did you choose werewolves for WEREWOLVES OF MONTPELLIER as a backdrop for your story?

JASON: The opening concept, the guy who dresses up as a werewolf and then is chased by real werewolves, I had in my mind a long time. I thought it was a fun, silly concept. But something was missing. It was only when I got the idea to mix it with an Audrey Hepburn movie that the story really took off. 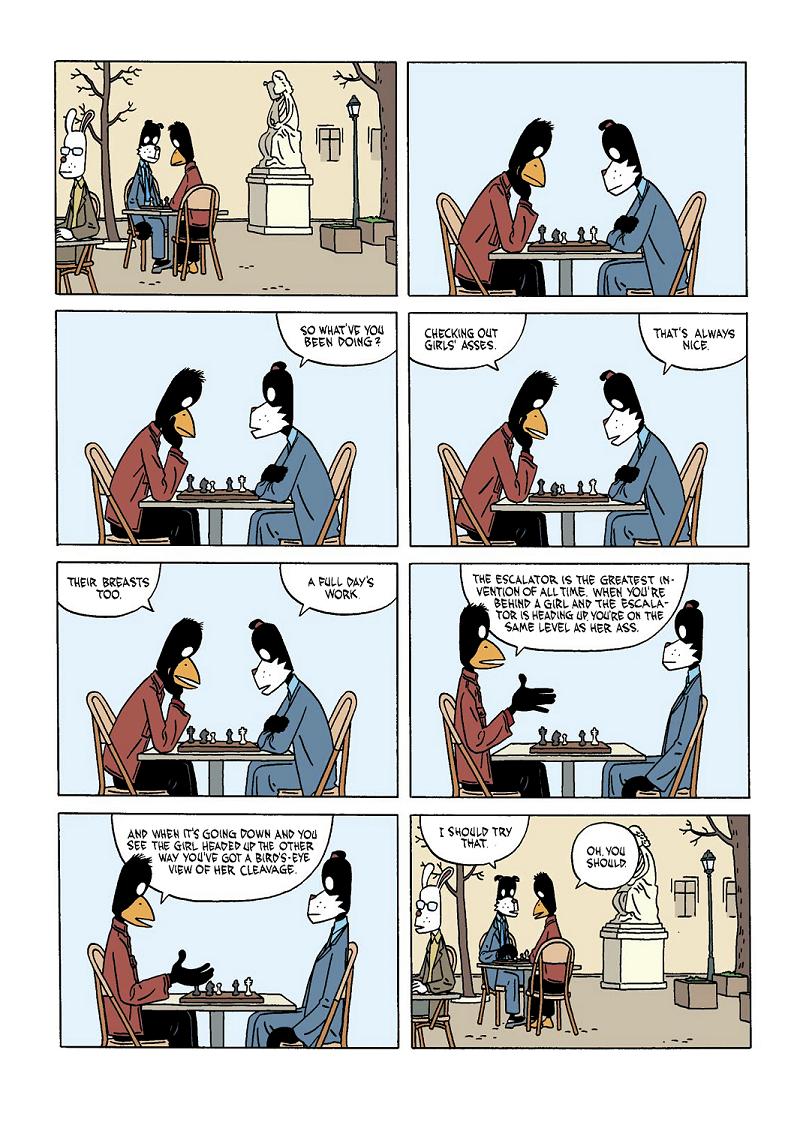 BUG: One of the most entertaining things about your work are the observations your characters have. I guess to be a writer is to be an observer. What type of preparation do you do before beginning a story? Do you do a lot of sitting in the park or laundromat looking at folks?

JASON: No, I don't sit around looking for characters. I don't have a sketchbook or write down overheard comments. The scene in the laundromat where he talks about being conned is based on something that happened to me when I lived in Brussels. This guy came up to me, saying he had lost his wallet and could I give him enough money to go back to England. I didn't really believe him, but after five minutes I felt guilty enough to give him 20 euros and a note with my address. The line, " I don't believe you, but this will be an experiment. If I get the money back, that means people can be trusted, if not it means the opposite.", that's what I WISH I had said. That's often what you do: you think about something that happened to you, but then you rewrite it.


BUG: You recently did a short in Marvel's STRANGE TALES MAX featuring a ton of indie artists. What was that like?

JASON: It was fun. I have a nostalgic relationship to Spider-Man, I especially enjoyed the Ross Andru issues. I got to write my own Spider-Man story. 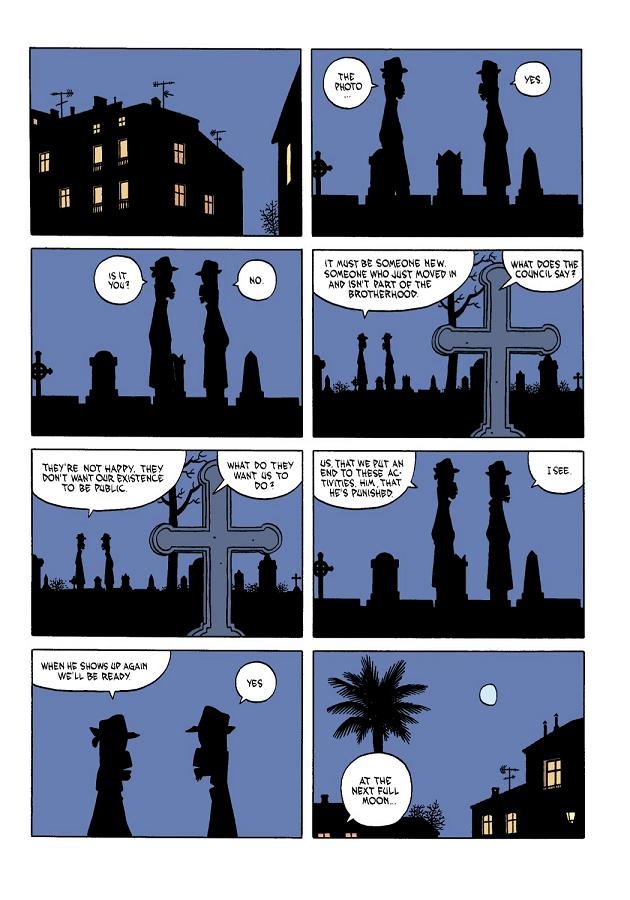 BUG: Would you ever be interested in lending your style to a full length mainstream book?

JASON: With mainstream you mean superheroes? I think I got it out of my system with this story. I like a lot of genres, but with superheroes it pretty much seems done to death. What new is there to say? If I should do something in that style it would probably be like the old Jimmy Olsen comics.


BUG: Out of all of your works through the years, what is your favorite comic you have written and why?

JASON: I've never done anything I'm completely happy with. I could go through each album and point out sequences I like, that I think work, but also things I'm unhappy with, things I could have redrawn. But for the most part, I'm pretty happy with the WEREWOLVES album.


BUG: What else are you doing at the moment? What's the next Jason epic going to be?

JASON: The next book is an omnibus, called WHAT I DID. It will consist of my three first books: HEY WAIT..., SSHHH! and THE IRON WAGON. I've just finished a new album, a story about pirates, done with a French writer. It should hopefully be out next summer. And for the moment I've started a new collection of short stories in the format of LOW MOON.

BUG: Ok, last chance, why should everyone go out and buy WEREWOLVES OF MONTPELLIER from Fantagraphics and when does it hit the stands?

JASON: It should be out in July, I think. If they don't buy it they will regret it, maybe not now, maybe not tomorrow, but soon, and for the rest of their lives.


BUG: Thanks so much for taking the time to answer these questions. Look for WEREWOLVES OF MONTPELLIER from Fantagraphics Books on July 14th!