LORD OF THE RINGS... image of a badass armored horse

Hay folks, finally an article where I can spell that first word wrong and make you all groan at me for bad pun usage. Heh heh heh... Here we have our first costumed character in the film. Albeit... it is a horse... but still, it's in a costume. Neigh, a badass bunch of armor.... really primal looking to me. I wanna see more! But.. well, here it is with the scoopy letter...

You probably don't remember me .. I sent in some stuff on LOTR a while ago. Well, I was scanning the newspapers on Monday for anything to write in about LOTR, seeing as how filming was starting then .. and found something just a lil more interesting, i.e. the attachment below. It's one of the many horses being used, decked out in very cool armour. This is NOT, I repeat NOT a film still, just a photo taken by a photographer for a newspaper here. On a side note, I know the location where this photo, and the filming, took place very well, as my brother lives nearby. And I can tell you, as any Wellingtonian can, the area is totally cool. Very Tolkien. Oh yeh, there's an article to go with it, but I'll leave that up to you to say if you want to read it .. I think it's stuff you'd already know.

Keeping my eyes and ears open for ya, 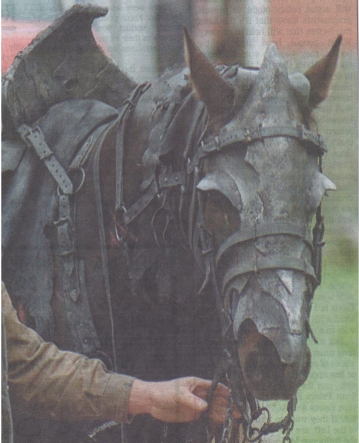 Hey folks, Harry here. I was poking around, TheOneRing.Net, and found a report about what had been shooting. Apparently it was the scene in which the Hobbits hide behind a tree stump from a ringwraith. So... the above horsey may in fact be from that scene. Note... these horses are meaner than your average horse.