Hey folks Harry here with an indepth report by Robogeek on the fantastic work that POP did on Mystery Men. The vistas in this film are just breathtaking and for me. Finally we get a city that... while overdone isn't cluttered to the point of no longer being a city. Champion City... Looks like a city. Like it's possible. Too often people try to go too far and it ends up looking dumb, you know what films I'm talking about. Personally I'm dying to see some shots of their work on THE GREEN MILE. Some of the work they are doing on that is going to be so good, you won't even know work is being done. Invisible effects. I love em!

ROBOGEEK EXPLORES THE FX WORK BY POP IN "MYSTERY MEN"

Recently, I had the opportunity to pay a visit to the two primary effects houses that worked on "Mystery Men" -- POP and Rhythm & Hues, courtesy of the brilliant and gracious Lori Nelson, who deserves some serious accolades for her work as Visual Effect Supervisor on "Mystery Men."

Among other things, Rhythm & Hues did what is arguably the "show piece" effect in the film, the dreaded PSYCHO-FRACULATOR. It is a really wonderful piece of work, and demostrates a state-of-the-art blending of both 2D and 3D texture morphing in an inventive and inspired way. It is an effect that is so striking, yet perfectly balanced aesthetically; it could have easily been executed too grotesquely, or too cartoony. But they pulled it off, yielding something equally horrifying and hysterical. It is so deliciously sick and twisted, I can't wait to show it to all my geek friends.

Unfortunately, I can't really show the effect to _you_, because its use(s) represents a major spoiler in the film. But I can say that you are in for a definite treat, and something you haven't seen before. In this day and age of effects films, that's saying something.

R&H also provided a lot of other CG work in the film, notably in the climactic conclusion. All in all, they produced over 60 shots for the film. They're a great group of people, and a pretty massive company. I believe they have something like 300 employees, and are working on a host of projects. (I couldn't resist doing a little poking around, and it seems they're working on one of the "Fantasia 2000" sequences, as well as the "Flintstones" sequel "Viva Rock Vegas" -- which I was thrilled to learn features the Great Gazoo!) All in all, I was very impressed -- and hope to be able to tell you more about them and their work in the future.

However, I have to admit that I was absolutely _blown_away_ by scrappy rough-and-tumble POP Film & Animation. My God, are they cool. They're a smaller effects studio, and they're hungry. They may not be a name as familiar to you as Rhythm & Hues, but they will be.

POP first came to my attention for their jaw-droppingly gorgeous work on "What Dreams May Come" (which won the Oscar for Best Visual Effects). It is simply one of the most beautiful looking films I've ever seen. POP's resident genius Deak Ferrand (who's also one of the coolest people I've ever met) provided the breathtaking digital matte paintings for the Vincent Ward film, which were worth the price of admission alone. Due to sheer ignorance, I didn't give Deak anywhere near as much attention and credit as, say, production designer Eugenio Zanetti. Well, I am privileged to redress that situation now. Deak rocks really hard.

If you've read the reviews by me and others on the site, you know that "Mystery Men," first and foremost, is a comedy -- and a damn funny and inspired one, at that -- featuring the single coolest cast you'll find on film this year. However, it also features some highly impressive effects work, much of which you simply won't be expecting. I don't want to ruin some of the surprises, but I do think the contributions of the effects artists warrant some attention, so I'm going to give you a little "tease" to intice you into seeing what I think is a seriously cool movie that shouldn't be lost in the shuffle this weekend.

Walking around POP and hanging out with Deak, I got the palpable sense of magic in the air. There's digital alchemy afoot, much of it absolutely extraordinary. You don't have to take my word for it; while you've been reading the last few paragraphs, your browser should've been loading a wealth of cool images that you are now just a scoll away...

But first, a quick intro to what you're about to see. POP did about 150 shots for "Mystery Men," including Champion City, digital matte paintings, and digital compositing. They also did one _very_ important CG effect element, but I don't want to tell you what it is, because you may not even realize it's CG for most of the movie (it isn't always CG, but it is more often than you might think). Feel free to post your guesses in Talk Back, and I'll let you know later this weekend therein.

Anyway, I'm pleased to be able to show you some examples of their work -- and how they were developed. Below you're going to see some conceptual renderings paired with their finished CG mattes, as well as some raw shots and their fully composited final versions. In other words, you're in for a real treat.

Please note: These images do not nearly do the original art and the finished film justice as they are compressed, scaled down JPEGs. Also, in case you're interested, these shots were done using the following software -- Photoshop, SoftImage, Eddie, Inferno, and Cineon. (All images courtesy POP and Lawrence Gordon Productions.)

CHAMPION CITY -- FROM CONCEPT TO FILM:

POP landed the "Mystery Men" gig in large part to Visual Effects Designer Deak Ferrand's conceptual designs -- which he developed in a miraculous three days. Below are some examples of his original proposed renderings, and the final shots that appeared in the film. They come from the film's awesome opening sequence, in which the viewer does an virtual-aerial approach of Champion City, literally flying through a matte painting with fully volumetric shots. It's a glorious 12-second sequence that masterfully blends 3D and 2D matte paintings and CG elements. 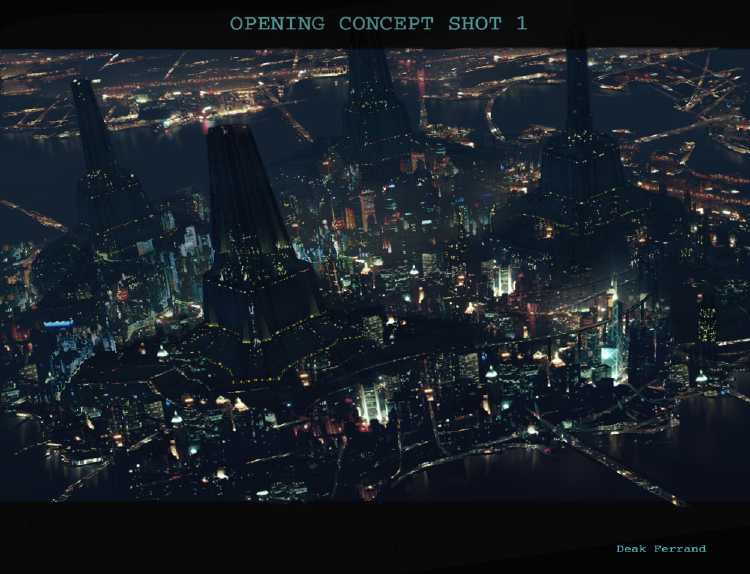 ...and here's the final version of the shot as appears in the finished film: 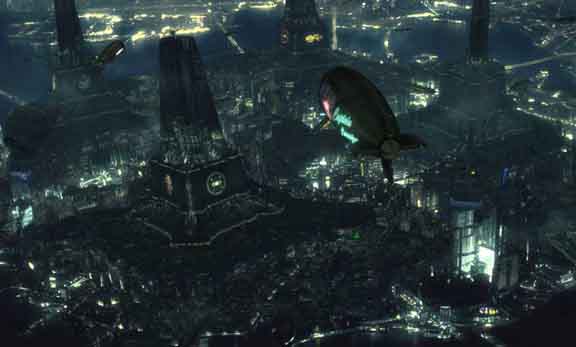 Is that cool, or what? (And by the way, Senior Matte Painter Rocco Gioffre did traditional matte painting work for both "Close Encounters" and "Blade Runner.") Oh, just wait until you see it all MOVE! Anyway, there's more. Here's another one of Deak's original concept paintings... 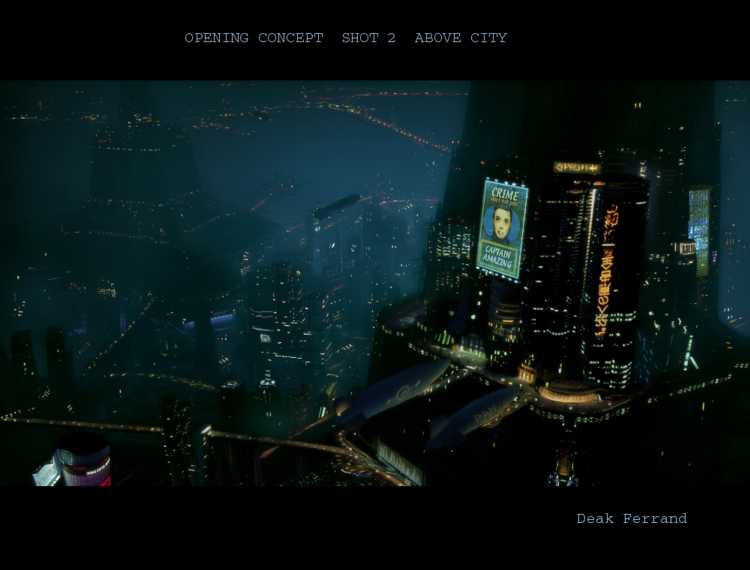 ...and here's a corresponding shot showing how it was ultimately translated to the film: 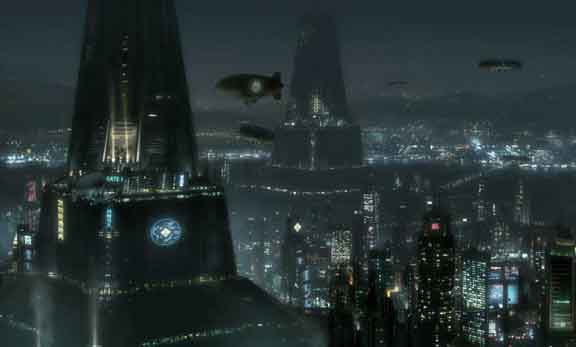 Now here's one of my favorite shots. In Champion City, there's a giant statue of the metropolis' protector, Captain Amazing. Here's Deak's original concept for it -- before the role was cast... 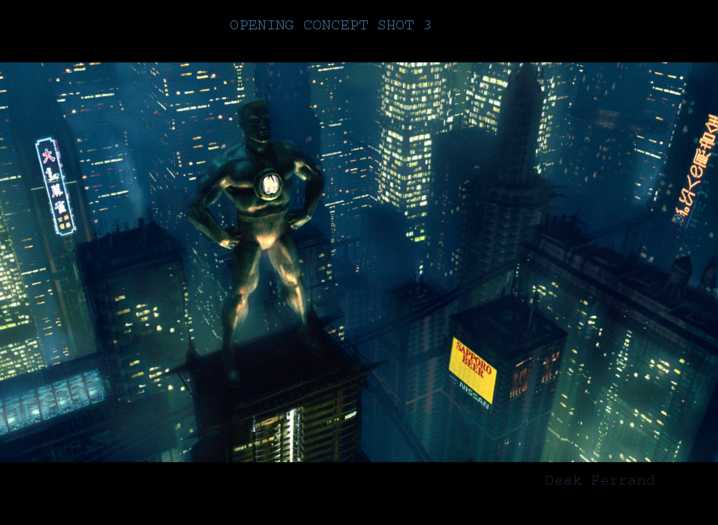 ...and here's a finished shot of it from the film, now digitally "sculpted" with Greg Kinnear's likeness (note El Cosmico's favorite restaurant in the background): 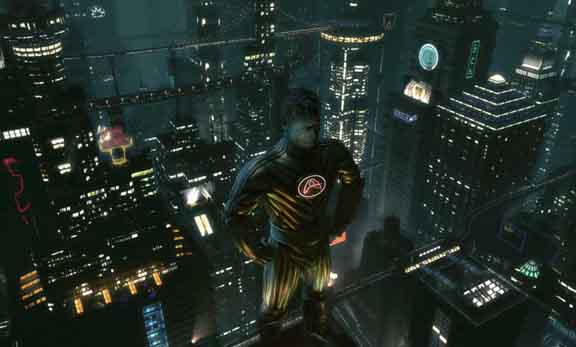 Okay, now we're going to look at some of the digital compositing work done at POP for Mystery Men. Basically, compositing is when you take "real" photographed footage, and meld it with "unreal" footage. (That's my low-tech explanation for non-techies.) Let me show you.

Here's an original plate of real footage shot for a scene in Champion City... 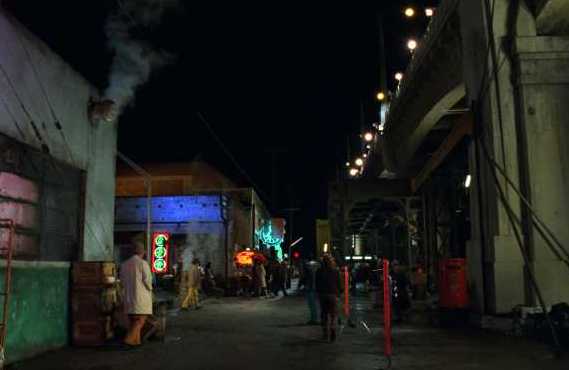 ...and here's the finished version of the shot from the film, now seamlessly integrated with the "virtual" Champion City: 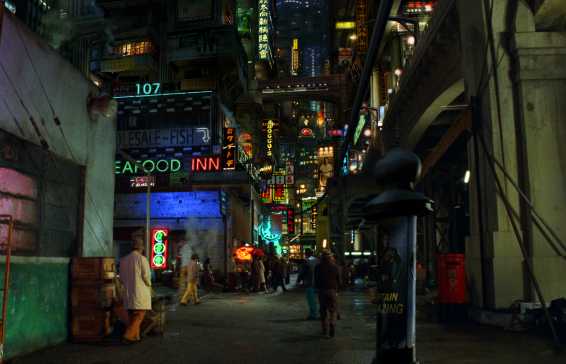 Now here's another example, that shows an intermediate stage of the process. In this shot, you'll be a composite-in-progress -- the live footage matched with temporary, rough CG modeling... 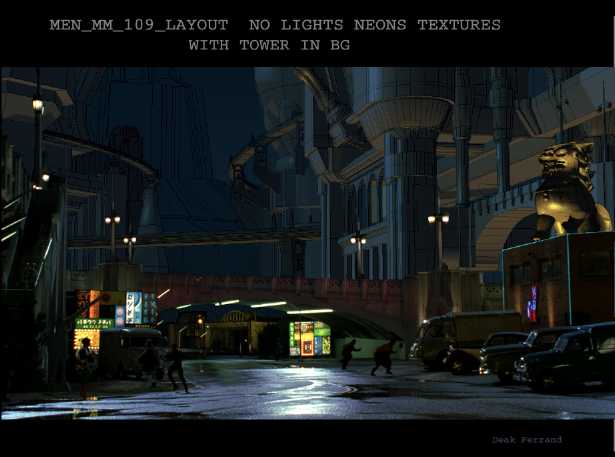 ...and now with the completed CG, and final composite: 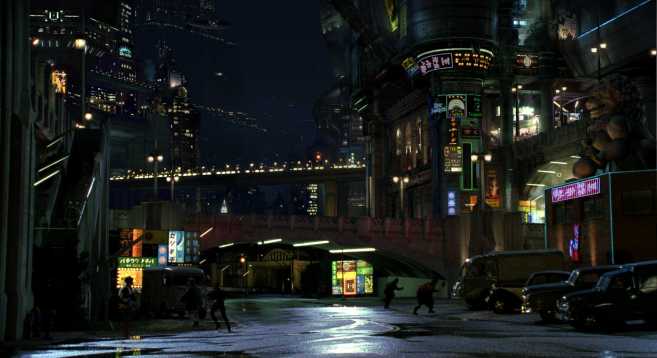 And there you have it! My thanks to Universal and producers Larry Gordon and Lloyd Levin for letting me share these with you, as well as Visual Effect Supervisor Goddess Lori J. Nelson and everyone at POP Film -- especially Visual Effects Designer Deak Ferrand and Digital Effects Producer Melissa Brockman.

It is a real joy to find cool people doing cool work, especially those who don't often get the attention they deserve. I, for one, can't wait to see what these folks do next. They are names to be reckoned with. I did get a peek at a secret pet project of Deak's which was absolutely stunning, and I hope he'll let me tell you about it on the site sometime (hint-hint!).

Now get off your butt and go see a bunch of great movies this weekend!

P.S.: POP recently handled the renovation of "Yellow Submarine," which MGM is re-releasing this fall, and has also been doing some work on "The Green Mile" and (I believe) "End of Days." I hope to bring you more on these projects in the future.