Q. So what's the rumpus?

A. Well holy shit, there's a new issue of THB coming out.

A. THB is pretty much my all-time favorite comic-book series ever, and I think some of you might like it, too. But back issues are a little hard to come by at the moment, and there aren't any trades collecting them (yet).

Q. So you're reviewing a comic I can't actually read?

A. Not exactly. Bear with me. This new issue -- THB: Comics from Mars #1 -- is a pretty good introduction to the series. It's billed as a "San Diego Comic-Con exclusive," and you can find it at the AdHouse Books booth (#2104) (and maybe online afterward) while supplies last.

But -- and this is partly why I'm writing this -- I also hear that the series may soon be collected and re-issued by a major publisher.

A. It's this brilliant, experimental, ridiculously energetic pop bomb of a comic by Paul Pope (100%, Batman: Year 100). It follows the weird and terrifying and funny and occasionally metaphysical adventures of a 14-year-old girl on Mars -- a girl on the run from robots and tax collectors.

This girl also hangs out with the coolest rock band on the Red Planet. And she has an inflatable purple robot bodyguard who's basically an ass-kicking genie.

A. Excuse me while I more or less quote verbatim from my review of the last issue, which came out way back in 2003. Because I feel like dancing a little less about architecture these days, this time there will be copious and large illustrations "utilized for the purposes of a review."

THB tells the story of HR Watson, daughter of a wealthy robot manufacturer on Mars. Dad wants to move his business out of the city to dodge taxes and circumvent some pesky space-travel laws. Trouble is, the Martian government is run by a bunch of tax-and-spend fascists who model their party on insect politics -- even going so far as to wear silly metal bug masks to work. (Many of the funniest scenes in the series involve minor functionaries growing exasperated as they fail to accomplish even the simplest tasks in the ruling party's choked bureaucracy.) 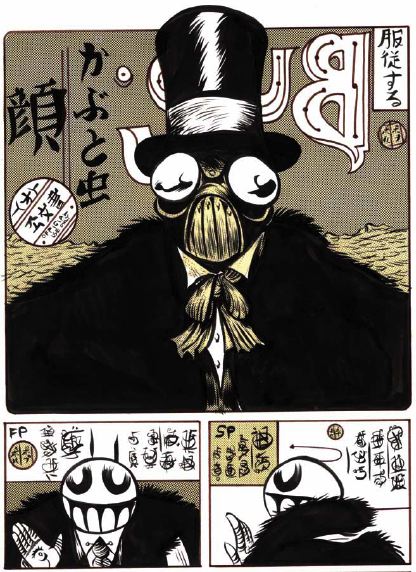 So the "Bugfaces" decide to bring in HR for questioning about her father's dealings. But despite sending their best agents, they've been having a hell of a time catching her over the 10 issues in the series, because, HR is armed with

(a) a magnetic vest that allows her to sort of waft above her enemies, and

(b) THB, her inflatable purple robot bodyguard. Most of the time, THB is "dehydrated" into a little rubber ball that HR wears around her neck -- but he expands, genie-like, into a seven-foot-tall superbeing when you pour water on him. And he can beat the absolute crap out of any giant robot who threatens HR.

It's a strange little story -- sort of a magic-realism libertarian fable -- but the really cool thing about THB is the way Pope builds his world.

His Mars has one of the most well-developed pop-culture underbellies in comics, ever. Pope has figured out what the popular rock bands, restaurants and beverages are, and he understands that a 14-year-old girl, even when she's on the run from the authorities, is going to spend a lot of time thinking about them -- and about love. Currently in the story, HR and THB have been hiding out with the members of a popular rock band on Mars -- the Complex Passions -- and HR has been falling in love with the lead clarinetist, "The Jiggler."

All this is happening while her father's bodyguard, Mr. McHaine -- the so-called "Meanest Mother on Mars" -- has been sent to fetch her and bring her back to Daddy.

And it all happens between insane action scenes in which increasingly weird Bugface robots try to capture HR. And by "increasingly weird," I mean totally bugfuck-nuts Lewis Carroll creations like:

1. A robot (above) that unfolds out of a tiny box and threatens to eat HR, only to be paralyzed when confronted with the paradox of Zeno's Arrow;

2. Another robot that infiltrates HR's townhouse disguised as a fucking Steinway piano, then tears the place apart as it chases her through the house; and

3. A robot named "Agent Haw-Haw" that won't stop laughing hysterically while taking potshots at THB with a disintegration gun.

And I'm just barely scratching the surface here. Pope has published over 1,000 pages of THB material at this point -- scattershot, over a 12-year period, with dozens more unpublished pages reportedly piled high in his studio. It's given him room to pack the story with richly sketched supporting characters.

I haven't even mentioned Lollie -- HR's mousy best friend with the opera-singer dad and the talking pig-dog for a pet (an animal who can tell you where to get the best milkshake on Mars).

Then there's HR's robot manservant Augustus. And HR's adopted brother Percy -- a hipster gearhead who introduces her to the Complex Passions. And then there are the romances and conflicts among the various band members. And there's the guy named Dawk who makes the band's posters and resents HR's privilege. And then there are HR's own feuds with her classmates at the Academy of Advanced Disciplines, where she's a slacker learning some apparently fairly intense fighting and hacking skills....

I could go on and on. (There may be some Wikipedia-entry expansion in my future.) But I especially haven't mentioned the art -- a fluid combination of European and Japanese and fine- and pop-art influences, equal parts manga and Moebius and Hugo Pratt and Jack Kirby. Pope can reportedly draw with alarming speed -- four oversized pages a day when he's cooking. (Click here to watch him doing exactly that on YouTube.) He started a blog late last year (he also has a MySpace and a Flickr gallery), and it's a great little online duck press of all his interests: He'll do a post about Kirby or Alex Toth, then throw in something about Guido Crepax or Andrew Wyeth. And this never strikes me as pretension on his part: Pope genuinely loves high and low art from comics shops and art galleries and fashion and advertising, can synthesize and hold forth on all of it knowledgably, and lets it all bleed into his work -- which to my thinking looks like nothing else in print.

Q. Well, I'll have to grab me some THB back issues.

A. And there, for the moment, lies the rub. Because THB also has one of the most hilariously erratic publishing histories in the history of comics, ever. Though, again, I hear that may be changing soon. More on that in a sec.

A. Borrowing liberally from my 2003 review, THB's publishing history goes something like this (just take a quick gander at this bibliography and skip ahead if you don't care):

1. Paul Pope published THB #1-5 from 1994-95. This was during the black-and-white self-publishing boom, and the sheer athleticism of what he was doing -- writing, drawing and publishing a comic that kicked off with a 96-page debut -- caused a minor sensation.

2. He then promptly burned out.

3. After taking a long break from the title, Pope re-published THB 1 after re-drawing several dozen pages.

6. You get the idea. Except that only accounts for the main narrative run of the series. Interspersed with that, Pope also self-published several books of THB short stories, fleshing out his increasingly weird Martian universe with flights of fancy, tone poems, lighthearted mini-adventures, little explanatory "Science & Invention" comics ...

You can find a mostly complete list of all the various issues and incarnations of THB right here, at Millarworld. It adds up to over 1,000 pages of comics and counting -- giving Pope's good friend Jeff Smith a run for his money.

Q. So why hasn't he released any trades of this stuff?

A.< /B> Because he's re-drawing issues 1-5 to rectify all the various changes in character design and story that transpired over the years.

A. His art has gotten exponentially more interesting to look at over the last 12-odd years, so I can't say I blame him. But if you've got money to burn, sometimes you can get lucky on eBay. Mars Import lists some of his back issues for sale. And Pope seems to have a solid relationship with The Beguiling, which sells his original art.

A. Well, Pope has dropped hints in a few different venues (including this terrific Wizard interview) that he may be making "some sort of announcement" about THB at San Diego this week. A Wired magazine profile from last year suggests it might be a trade-publishing deal with Henry Holt.

I should note here, BTW, that Pope is also signing copies of PulpHope -- a brand-new, 224-page monograph of his artwork that really deserves its own review. I've flipped through it, and it's a vasty thing: a gorgeous, messy, frequently NC-17 collection of artwork and essays that covers everything from manga to erotica to genre theory to Pope's own working process. I love what he says in his essay about deadline dread, "What to Do When It Goes Away and How to Get It Back," which may just be required reading for anyone who's ever had to produce creative work within a timeframe: "There's nothing to do but learn to love this, even after the romance wears off. You must love this stress and learn how to burn with it, not to be burnt by it, otherwise it is a miserable servitude without much recompense. This is your choice, this is your garden. Now cultivate it."

Anyway. This review sums up the book's appeal rather nicely. And Warren Ellis just blurbed the pants off it.

Q. So after all that foreplay: How's this new "SDDC exclusive" issue of THB?

A. It's pretty terrific, and a solid intro to the overall vibe of the series.

THB: Comics from Mars #1 sets its tone immediately with this batshit-crazy splash page, which stretches over four pages and would do Geoff Darrow proud.

Pope then offers up "A Brief History: or, How There Came to Be People on Mars" -- an eight-page history of the colonization of Pope's Mars, written in the form of one of HR Watson's hastily-thought-out school papers. Which means it talks about how Earth has been overtaken by a Vernor Vinge-style Singularity, then illustrates the civil war between Mars and Earth in the crudest possible terms --

-- then pauses for panels of stark beauty:

This is followed by "Fun! Comics," one of Pope's metaphysical goofs -- in which we meet two Kirby-like "UR-PEOPLE ... the unseen continuity mechanics living between sequential phases of meta-fictive time/space," as they try to fix a broken animatronic dog and get hung up on the dog's lack of actorly motivation.

Finally, there's a re-draw of "The Bumble Hip Shake," a short story that first appeared in THB #2 way back in '94. It's a little vignette about HR and Lollie showing up at a gangster's nightclub demanding milkshakes -- "made from the milk of ... of ... actual cows! Imported cows -- all the way from Earth!" (Criminals and food are a motif in the THB universe; in one book, we learn the most popular TV show is "Martian Mega-Gangsters," in which two zoot-suited thugs blow each other to smithereens and enjoy cans of noodles afterward.)

All this is vacuum-packed into 32 black-and-white, ad-free pages -- a real meal of comics -- and while it doesn't continue the main story, it's a nice toe-dip back into the THB waters. If Pope makes some sort of announcement at SDCC about re-issuing the entire series (and that's looking semi-likely, given his comments), then THB: Comics from Mars #1 ends up being a sort of deluxe ashcan for that reissue.

I obvs. really hope it happens: I'd love to see a larger audience finally get to discover one of the coolest, weirdest, most wildly creative products of the self-publishing boom. And I'm guessing today's manga-loving kids would go completely insane for it.

Arm yourself to attack my critical judgment! It's easy and fun! Visit The DuPont Bibliography! 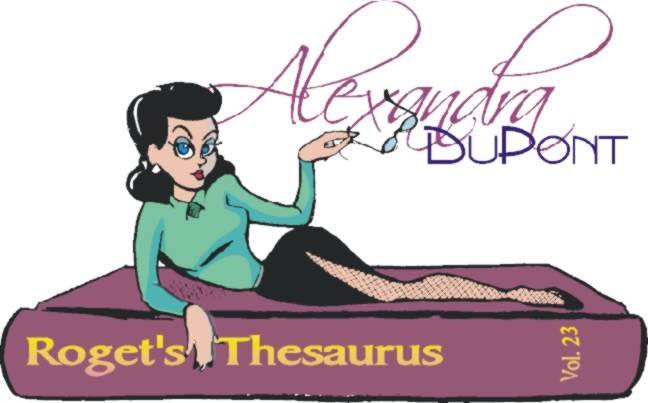